Along the lines of the USAF’s Weapons School and the US Navy’s TOPGUN, the Marine Corps Weapons and Tactics Instructor Course (WTI) ensures that Marine Corps aviators are schooled in the latest advanced warfighting tactics and techniques. Aviation Photography Digest takes a look at the recently completed WTI 1-16.

Facilitated by Marine Aviation Weapons and Tactics Squadron One (MAWTS-1) since 1978, this seven-week course provides advanced tactical aviation training designed to produce weapons and tactics instructors. The first three weeks of this course is in the classroom. The last four weeks consists of progressive advanced aviation training which includes live flying.

Each day and each week, the training topics, in the form of “events,” get more progressive and comprehensive with the goal of creating “trainers” in advanced tactical aviation training. “We take these individual men and women, enlisted and officer, and get them up to speed with techniques and procedures we use on the battlefield. We send them back to their units to be the highly trained and skilled trainers for their units,” said Col. James H. Adams, commanding officer of MAWTS-1 in a USMC interview.

While the “train the trainer” approach has remained unchanged, WTI has evolved over the past five years. “Over the last 5 years, WTI has evolved tremendously. With the success of the course and the impact the WTI graduates have to the fleet, the demand signal for WTIs has remained steady, if not increased. More students come through the doors than ever before. Regarding the course itself, the construct of the course has changed over the last three years to expand and train to the capabilities of upgraded aircraft and new systems. New technologies continue to be evaluated for potential incorporation into fleet aircraft,” Maj. Jason Duke Aviation Development, Tactics and Evaluation (ADT&E) Department Head at MAWTS-1, told Aviation Photography Digest.

The curriculum and progression of WTI 1-16 remains similar from iteration to iteration, but applications and tactics are constantly refined. “The general conduct of the WTI course is largely unchanged. That said, each course varies with the number of students in the different aircraft divisions, as well as the technology and Tactics, Techniques, and Procedures (TTPs) evaluated. With this last course, there were several new and different elements.  For example the fixed wing aircraft refined their air-to-air tactics. Various aircraft weapon systems were evaluated to validate extended range capability,” said Duke.

Throughout the course of WTI, the missions that comprise the many events encompass the Six Functions of Marine Aviation. While WTI’s training utilizes all assets across the entire Marine Air-Ground Task Force (MAGTF), other U.S. DoD units do sometimes get involved. “They are mostly in support roles as we get different platforms out to provide CAS, Command and Control, and Intelligence, Surveillance, and Reconnaissance (ISR). The focus of the course is to create Marine Corps WTIs, so the assets are mainly from the Marine Corps. The other service assets provide exposure to the WTI students and joint capabilities they may encounter in the fleet,” Maj. Duke said.

Other non-USMC assets that were utilized for WTI 1-16 included: A USAF Northrop Grumman E-8 Joint STARS and Boeing E-3 Sentry (AWACS) and non-DoD civilian aircraft such as: a Mil Mi-24 Hind, BAC Strikemasters, BAC Jet Provosts, along with a few others.

Unmanned Aircraft Systems (UAS) such as the USMC’s RQ-7B Shadow was also a part of WTI 1-16.

Out with the Old…

With this summer’s last flight of the Boeing Vertol CH-46 Sea Knight, commonly known as the “Phrog,” in the USMC, all eyes are on the performance of the Bell Boeing MV-22B Osprey. With a primary mission of amphibious assault transport of troops, equipment and supplies from assault ships and land bases, the Osprey has become a true multi-mission aircraft for the USMC.

According to Maj. Duke: “The MV-22 Osprey brings speed, range, and depth to the Combatant Commander’s fight. All the Marine Expeditionary Units (MEUs) are now built around the MV-22 squadrons, so they are forming the backbone of the fleet that the CH-46Es once were. The Osprey’s ability to aerially refuel provides flexibility to the speed and expands their range immensely. They can also refuel other aircraft on the ground and they carry on-board some of the nation’s most important cargo: the United States Marine. The capabilities provided by the Osprey are essential to the MAGTF and are a large part of why the WTI course was updated.”

A relatively new player to WTI is the Lockheed Martin F-35B Lightning II JSF. With the USMC declaring that 10 F-35B’s from Marine Fighter Attack Squadron 121 (VMFA-121) had reached Initial Operational Capability (IOC) this summer, the Marines are clearly leading by example with their progress with the F-35. For WTI 15-2, the F-35 saw extensive involvement in close air support (CAS), armed reconnaissance (AR), and anti-air warfare (AAW) missions. WTI 1-16 signified the increased and continued presence of the JSF.

Bring on the Tech

Some of the most significant advancements in military aviation have come in the form of new warfighting technologies. The F-35, for example, may not be the fastest, most maneuverable aircraft in the world, but it brings advanced technology to the warfighter that no other fighter in the world possesses. The ability to identify the enemy and eliminate them long before the F-35’s presence is known is just one of the advancements of the F-35.

Technological advancements in the realm of communications, weapons systems and other areas are constantly evolving and need to be identified to expand warfighting capabilities. While WTI participants are generally not the first users of these technologies, MAWTS-1 is always looking at these technologies to expand and train new warfighting capabilities. Maj Duke explains: “The squadrons do not typically receive technologies first, but they are generally the first to determine the need for a technology, such as requirements for new and improved planning tools. The need is usually identified as a result of a gap in capability.  MAWTS-1 will occasionally evaluate these new technologies during the WTI courses to determine whether the technologies have the potential to fulfill identified capability gaps and fleet needs.”

In regards to communications, one term that is often heard that relates to military aviation and communication is “digital interoperability.” For the USMC, the ability to provide real-time data across the entire MAGTF and its assets can provide key advantages for the warfighter. Currently, the USMC is embracing digital interoperability and incorporating it where it can. In turn, MAWTS-1 is incorporating its use into WTI. While aircraft such as the F-35 seem readymade for digital integration, some of the older airframes in the USMC can present challenges when incorporating this technology.

“WTI is progressing very well in these areas. Each service has the capability of Digital Interoperability present to varying degrees. Retro-fitting some aircraft with the capability has been very easy for some platforms. However, with the different service aircraft and missions available to each service, the ability to integrate digitally was never part of the original plans and presents its own challenges,” said Maj Duke.

One use of technology that has become part of many Large Force Exercises (LFE) today is the virtual construct, or the ability to use simulators to bring aviators to the battlefield and present them with real-world missions. Although flight simulators are used throughout the USMC, WTI is not currently presenting a virtual component to the participants. Maj Duke explains: “Many of the aircraft simulators exist at the various Marine Aircraft Groups (MAGs) that are the parent organizations for the various Type/Model/Series (TMS) aircraft and squadrons. MAWTS-1 does not have a simulator building dedicated to just such a function as flying integrated virtual missions across the various TMS platforms.”

As Maj. Duke mentioned previously, for the USMC, WTI can be a time for testing new technologies and finding better ways to utilize present technology. 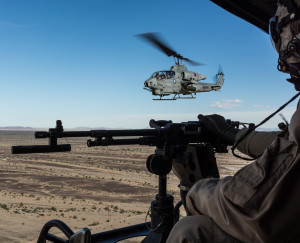 During WTI 1-16, one new technology that was tested was the latest Common Aviation Command and Control System (CAC2S system). According to a USMC document: “CAC2S will provide a complete and coordinated modernization of Marine Air Command and Control System (MACCS) equipment. CAC2S will eliminate current dissimilar systems and provide the MAGTF Combat Element with the hardware, software and facilities to effectively command, control and coordinate air operations integrated with naval, joint and/or combined C2 units. CAC2S will comprise standardized modular and scalable tactical facilities, hardware and software that will significantly increase battlefield mobility and reduce the physical size and logistical footprint of the MACCS.”

With this innovation, the USMC’s air command and control should see significant improvements over the legacy systems. According to a USMC release: CAC2S, “can support multiple air combat element operations in deployed environments, allowing Marine Corps aviation to excel in operational, technical and performance capabilities.”

The testing of new and existing weapons systems is also commonplace at WTI.

For the “train the trainer” approach to be successful. The WTI course graduate must be able to take the lessons learned back to the individual units. A successful graduate must become a subject matter expert for their particular airframe. “WTI exists to ensure the MAGs are able to stock each squadron with the required number of Weapons and Tactics Instructors. The goal is for the WTI to provide standardization as an extension of MAWTS-1. During WTI, the students are exposed to environments and scenarios which they may have not yet seen before. This enables the students to see training from a different perspective than how they might have been trained and expand upon it to improve their unit training program. They will be the subject matter expert (SME) for their aircraft, mission planning and execution, and training personnel,” Maj. Duke told APD.

Much like the USAF’s Weapons School and the US Navy’s TOPGUN, MAWTS-1 and WTI will continue to be the USMC’s schoolhouse for advanced aviation tactics and techniques.

A foundation which was developed in the late 70’s emerges today as a program designed to innovate and educate advanced warfighting techniques to Marine Corps aviators. As Maj. Duke mentioned, “MAWTS-1 will continue to monitor and refine the WTI course to make sure the fleet is getting what they need to accomplish the mission. We will continue to innovate and look for ways to improve the manner in which the Marine Corps conducts warfighting and integration across the Marine Corps Functions.”

Aviation Photography Digest would like to thank Captain Justin Smith, Corporal Charles Santamaria, Lance Corporal Connor Hancock and the people of MAWTS-1 for their first class support during WTI 1-16.