Photos by Isaac Lebowitz (unless noted) 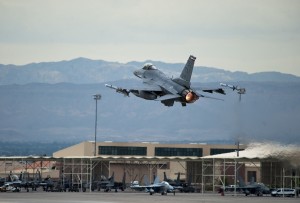 n August 28, 2015, the sun set on the final Red Flag exercise of fiscal year 2015 (FY-15) and the completion of 40 years of Red Flag exercises. Hosted by Nellis Air Force Base (AFB), facilitated by the 414th Combat Training Squadron (414 CTS) and utilizing the Nevada Test and Training Range (NTTR), Red Flag is the largest and most realistic aerial combat training exercise in the world.

The integration across DoD forces also becomes more of a factor in the Red Flag exercises, as assets and capabilities are shared to reach a common goal. “There has also been great training with our sister service Marine and Navy members. We had ground forces stay out in the field for the entire exercise and have had the broadest jamming capabilities from the Navy ever,” Weed stated.

The last time the Israeli Air Force (IAF) participated in a Red Flag exercise was in 2009 when they brought their F-16I “Sufa” fighters. For Israel, Red Flag 15-4 provided an opportunity to integrate with U.S. forces while participating in a large-scale military exercise. In an IAF interview, Brigadier General Nir Barkan, Head of Air Division stated: “Returning to ‘Red Flag’ is highly important for us.” He went on to say: “The exercise is of a very high standard which both enriches us professionally and strengthens our cooperation with air forces from around the world and specifically with the USAF.”

For Red Flag 15-4, the IAF brought F-15D and F-15I fighters, along with several Boeing 707 tankers. The F-15I Ra’am, or “Thunder,” is a modified version of the F-15E Strike Eagle. Israel was represented by multiple squadrons including: 107 “Knights of the Orange Tail” Squadron (F-15) and 69 “Hammers” Squadron (F-15I) out of Hatzerim Airbase, 106 “Edge of the Spear” Squadron (F-15) out of Tel Nof Airbase and 120 “Desert Giants” Squadron (KC-707) out of Nevatim Airbase. Modifications to the F-15I that differentiate them from a standard F-15E Strike Eagle include, but are not limited to:

First reported by Foxtrot Alpha, in an unprecedented display of military cooperation, F-16AM/BM’s from No 6 Squadron of the Royal Jordanian Air Force (RJAF) made the journey, to and from, Nellis AFB assisted by the IAF’s Boeing 707 Re’em tankers. To some, this may seem unusual due to the tension in the volatile middle-east region, but in 1994, Israel and Jordan signed a historic peace treaty. The two countries have made strides towards cooperation since then with several economic and trade agreements. Jordan, looking to bolster its campaign against ISIS in Syria, also finds it has a common goal with Israel with the battle against ISIS.

For the second summer in a row, the Republic of Singapore Air Force (RSAF) has participated in a Red Flag exercise. As they did in Red Flag 14-3, the 425th Fighter Squadron (425 FS) “Black Widows” based at Luke AFB, participated with its Block 52 F-16 C/D Fighting Falcons. The 425 FS is a USAF squadron with a mission to provide advanced fighter training for the RSAF’s F-16 pilots under the auspices of the Peace Carvin agreements. Peace Carvin is a series of agreements under the Foreign Military Sales (FMS) program. The Peace Carvin agreements provide the terms of the FMS which includes the type of aircraft, the training that will be provided and any other terms of the sale. Sales of the Block 52 F-16 C/D aircraft to the RSAF are under Peace Carvin II. The RSAF also participated with their CH-47 Chinook helicopters which were purchased under the Peace Prairie agreement. Absent were the RSAF’s F-15SG Strike Eagles of the 428th Fighter Squadron (428 FS) “Buccaneers” based at Mountain Home AFB in Idaho. The 428 FS spent a portion of the summer at Davis-Monthan AFB in Arizona and at Gowen Field Air National Guard Base in Idaho while Mountain Home AFB goes through runway renovations.

F-22’s from the 199th Fighter Squadron (199 FS) “Fighting Tikis” out of Joint Base Pearl Harbor–Hickam in Hawaii.

Bombers were not seen at Nellis AFB, but, most likely, participated while flying out of a different base, as they are an important component of Total Force Integration (TFI). This has occurred during a few of the Red Flag exercises in the past. Since bombers are often tasked with long-range missions, it makes sense to have them fly out of their home or a detachment base. With today’s conferencing technology, bomber pilots and crew can take part in post-mission briefings virtually via video conferencing and/or coordinate electronically for lessons-learned.

Red Flag 15-4 saw the return of Virtual Red Flag in the form of Coalition Virtual Flag 15. Coalition Virtual Flag 15 included participation of the Royal Australian Air Force (RAAF) with the E-7A Wedgetail and the C-130J Super Hercules. According to the RAAF, this was the first time the C-130J Full-Flight Mission Simulator (FFMS) was networked into the exercise. The simulator was operated by 285 Squadron at RAAF Base Richmond in New South Wales, Australia. 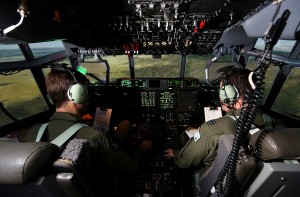 “They could communicate with aircrew flying real aircraft on missions for Exercise Red Flag, and be engaged by constructive or real threats in the exercise area,” Hogan added.

According to Canadian company CAE, who supported the exercise by ensuring connectivity of the RAAF FFMS to the Common Database (CDB) virtual gaming area of southern Nevada, the C-130J FFMS was the first Australian Defence Force (ADF) FFMS networked to the Coalition Virtual Flag exercise that included live, virtual and constructive assets and entities.

Coalition Virtual Flag 15 presented some of the same challenges to pilots as Red Flag 15-4 presented, while avoiding the logistic and cost issues associated with actual participation. As companies such as CAE, Lockheed-Martin and others continue to innovate with virtual networking and simulator technology, virtual exercises will become an increasingly important component of maintaining force readiness while keeping costs manageable.

According to Weed, this is the second time Virtual Flag has been a part of Red Flag (Red Flag 15-2 was the first).

The 2016 lineup of Red Flag exercises promises to continue the premise of TFI, while presenting sophisticated conventional, non-conventional, cyber and space threats for forces to learn from. While the schedule for 2016 has not yet been announced, we know who some of the participants will be. According to Weed, there will be four Red Flag exercises next year and… “For the second and fourth Red Flag, we will be including foreign players which include the United Kingdom, Australia, Turkey, Italy, Pakistan, United Arab Emirates, and Spain.”

Based on this information, it appears that Red Flag 16-1 and Red Flag 16-3 will include only American forces, although partner and coalition forces could participate virtually via another Virtual Flag. Red Flag 16-2 and Red Flag 16-4 will have an international presence from an impressive lineup of countries.

Throughout the past 40 years, Exercise Red Flag has continued to prepare pilots, crew and support personnel for combat by presenting realistic scenarios to simulate their first ten combat missions. Aside from this, the key takeaway is learning how to integrate. Whether it’s different units, different DoD branches, different assets or different countries, learning how to work together as one united force is vital to real-world mission success. Integration cannot be taught in a classroom, or read in a book…it must be learned through the trial and error a sophisticated and comprehensive exercise such as Red Flag presents. This is why in the past, present and future, there is no better cost-to-benefit ratio than the one that Red Flag offers to U.S., coalition and partner nations.