A few weeks after the sun set on Red Flag 14-3, the United States Air Force (USAF) announced that the 65th Aggressor Squadron (65 AGRS) would be deactivated in September 2014. While some of the 65th AGRS’s McDonnell Douglas F-15C Eagles would be temporarily flown by the 64th AGRS through March 2015, Red Flag 14-3 would be the last Red Flag exercise that the 65th AGRS would participate in. Not knowing this prior to this Red Flag exercise, some of us braved the 105+ degree Fahrenheit (40.6+ Celsius) summer Las Vegas temperatures to capture the sights and sounds of  Red Flag 14-3. 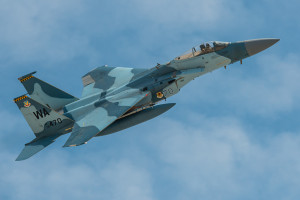 Aggressor pilots have to be skilled and experienced to understand the tactics of the United States and it’s allies, while emulating the tactics of potential adversaries. To be considered for training as an aggressor pilot,candidates must have up-to-date experience flying an F-15 or F16 and be a previously qualified instructor pilot with a minimum of 600 fighter hours. The challenge lays in the training. Aggressor pilots must be trained in adversary tactics and doctrine. The U.S. and it’s allies do not have just “one” potential enemy, so the tactics and doctrine have to be adopted from several potential adversaries based on the latest intelligence. These tactics are not limited to only air-to-air encounters. In an interview earlier this year, Lieutenant Colonel Jon Berardinelli, Commander of the 57th Adversary Tactics Support Squadron (ATSS), stated: “ultimately, what we do is we take four domains as aggressors. That’s the air domain, the air defense domain, cyber and space. We put all that together to give a realistic and relevant replication of potential threats that you may encounter out in actual combat”.

For the Blue Forces, or the “friendly” participants in a Red Flag exercise, the degree of difficulty that they face from the Red Forces, or adversaries, progresses as the exercise progresses based on lessons learned from the previous day’s missions. While the degree of difficulty is adaptable, the scenarios that are used for the Red Flag exercise are a result of planning. According to USAF First Lieutenant Chris Clements, a member of the 547th Intelligence Squadron, who helps manage the intelligence for the Red Flag exercise, “individual scenarios are not really based on anything forward-looking. A lot of times the overall scenarios politically/geopolitically are more inspired by things that have happened and the lessons learned from these experiences”. Simply put, the scenarios are focused more on situations and experiences that are known versus trying to guess what could possibly happen in the future.

If someone were asked for one word that describes the largest benefit of the Red Flag exercises, this word would be: integration. According to USAF Captain Paul Sheehey of the 55th Rescue Squadron (55 RQS), “the end goal (of the Red Flag exercises) is integration”. Integration at Red Flag comes in many forms. Examples include United States forces, such as the Air Force and the Navy, integrating with each other, U.S. forces integrating with foreign forces and different assets being integrated together. For example, in Red Flag 14-3, F-16 units learned how to integrate with F-15, F-22, B-1, B-52 units along with other assets. This experience can be valuable when a “real world” conflict will force integration between forces and assets. Capt. Sheehey also stated that: “the focus (of Red Flag) is not necessarily the enemy, it’s integration. Trying to figure out how to integrate and maximize everybody’s capabilities to attack a problem”. Although it was not as present in Red Flag 14-3 as it has been in previous Red Flag exercises, integration also is in the form of forces from several nations integrating their tactics and capabilities together to find a best practices solution to solve a problem. In a real world conflict, the United States and it’s allies often have to work together. Red Flag helps build relationships for a smoother integration during times of combat. This integration is not limited to pilots and their aircraft. Maintainers, planners and other ground-based forces learn how to integrate and work together for optimum efficiency and effectiveness. 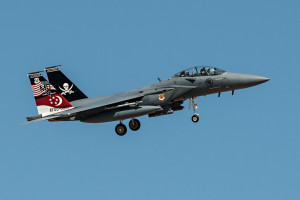 Red Flag 14-3 took place from July 14th to July 25th at Nellis Air Force Base in Nevada. While the Red Flag 14-3 lineup lacked some of the “panache” of some of the previous Red Flag exercises, with limited participation by foreign forces, the quantity of aircraft participating was up to the typical Red Flag standard. Red Flag 14-3 included the participation of approximately 2400 individuals, 116 aircraft and 20 different units. Limited to the U.S. based 425th and 428th Fighter Squadrons of the Republic of Singapore Air Force (RSAF) and a single Armée de l’Air (French Air Force) Lockheed C-130H-30 Hercules, participation from allied forces was minimal. The “Block 52” F-16’s and the F-15SG’s of the RSAF utilize state-of-the-art avionics and targeting capabilities while showing a little flash by having several aircraft with painted tails commemorating the Peace Carvin agreements. The Peace Carvin agreements allowed the RSAF to acquire these aircraft and train with the USAF. The 425th FS trains at Luke AFB in Arizona and the 428th FS trains at Mountain Home AFB in Idaho. The French Air Force C-130H-30 was something that is not seen often, not even in Europe. The “stretch” C-130 flew missions on Mondays, Wednesdays and Fridays. 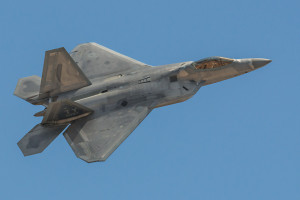 A surprise participant for Red Flag 14-3. A Lockheed Martin F-22A Raptor from the 95th FS based out of Tyndall AFB in FL

Other visitors that are not seen very often were the General Dynamics F-16C Fighting Falcon’s based at Aviano Air Base, Italy. These aircraft, along with the RAF Lakenheath, U.K.-based F-15E Strike Eagles, came a long way from home to participate in Red Flag 14-3. The Rockwell B-1B Lancers from the 34th Bomb Squadron out of Ellsworth AFB, SD USA were also a nice addition. Boeing B-52H’s from the 23rd Bomb Squadron out of Minot AFB, ND USA also participated but were not seen at Nellis AFB. Due to being in a deployment status for maintenance, they did not re-deploy to Nellis AFB, and chose to fly missions from a different air base. A surprise visitor, not on the original roster, was the Lockheed F-22A Raptors of the 95th Fighter Squadron out of Tyndall Air Force Base in Florida. The 95th FS was reactivated in October of 2013 and is comprised of F-22’s that were formerly based at Holloman AFB. The complete list of Red Flag 14-3 participants includes:

While “budget cuts” have taken a toll on the military forces of the United States and it’s allies since the end of the “Cold War”. These cuts are not necessarily the result of countries not being able to afford a strong military, but more about re-allocating funds for other “perceived” priorities. The assumption is that modern and future technology, less resources, and a more strategic approach, will lead to an efficient, yet effective force. The 65th Aggressor Squadron is the latest victim of these cuts. The 65th AGRS has a long lineage that dates back to World War II. Since then, the squadron has been deactivated and reactivated several times. Since most of the serious threats to the U.S. and it’s allies fly Generation 5 aircraft, when looking ahead, one can hope the plan is to incorporate Gen 5 aircraft such as the F-22 into an adversary role in the future. With this being said, maybe sometime in future, the 65th can be reborn and adversaries participating in the Red Flag exercises can fly state-of-the art Gen 5 aircraft. While the adversary role is less about the type of aircraft and more about tactics, Gen 5 aircraft have different capabilities which can change the type of tactics used.

As for the Red Flag exercises themselves, the value of the exercises is understood and respected by both military leaders and political decision-makers. For fiscal year 2015, there are four Nellis AFB- based exercises planned in addition to multiple Red Flag Alaska exercises. These exercises will ensure readiness and integration for U.S. and allied forces. I will be eagerly anticipating Red Flag 15-1, but the 65th AGRS will be missed.

To the pilots, maintainers and other crew members of the 65th Aggressor Squadron, thank you for taking on the mission of preparing pilots of the forces of the United States and it’s allies for combat. With this preparation you contributed to the readiness of these forces which, ultimately, saves lives during a conflict. You will be missed.

Aviation Photography of the West would like to thank the 99th Air Base Wing Public Affairs group for their hospitality during Red Flag 14-3.