A New Era Begins at Luke Air Force Base

A New Era Begins at Luke Air Force Base

You would have to go back to 1983, when Ronald Reagan was the U.S. President and “Every Breath You Take” by the Police was at the top of the Billboard Charts, for the time when pilots began training in the F-16 Fighting Falcon at Luke Air Force Base (AFB) in Arizona. Eleven years later, in 1994, the 58th Fighter Wing (58 FW) was replaced by the 56th Fighter Wing (56 FW) at Luke, with the primary mission of training F-16 pilots under the USAF’s Air Education and Training Command (AETC). On March 21 2015, Luke AFB and the 56 FW adopted a new mission by formally taking on the responsibility of training pilots in the Lockheed Martin F-35A Lightning II Joint Strike Fighter (JSF). 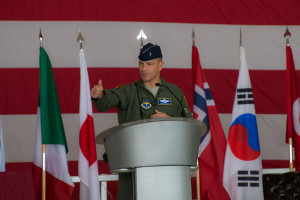 In a formal Change of Mission Ceremony held at Luke AFB, Brigadier General Scott L. Pleus, Commander of the 56 FW, symbolically entered in a new era where the 56 FW’s updated mission is to: “train the world’s greatest F-35 and F-16 fighter pilots.” “This base will bear witness to pioneer new concepts in flight training and allied operations as we enter both the U.S. and partner nations into a single training program securing air dominance far into the future,” said Major William M. Andreotta, 56th Training Squadron assistant director of operations.

The ceremony consisted of a salute to the former primary mission airframe, the F-16, and a salute and 56 FW flagship dedication to the new mission’s airframe by Brigadier General Scott L. Pleus. At that time, Brigadier General Scott L. Pleus’ name was unveiled on the flagship F-35 (“LF” 12-5056). Distinguished speakers at the ceremony included Brigadier General Scott L. Pleus and Ms. Lorraine M. Martin, Lockheed Martin’s Executive Vice President and General Manager of the F-35 Program. At the end of the ceremony, a new 56 FW lithograph was unveiled for the new mission with an F-35, a pilot, and maintainers as the subject. The artist of the lithograph, Mr. Charles Lilly, was on-hand for the official unveiling. One of Mr. Lilly’s recent works included a painting for the USAF that hangs in the Pentagon.

This formal change of mission was just one of many milestones within the JSF program that have been reached recently at Luke AFB. General Pleus elaborated: “Since last year’s unveiling ceremony we’ve had a lot of milestones. We’ve had our first student sortie, we’ve had our first class of F-35 pilots that just started on the 4th of May, we flew our 1000th sortie here at Luke Air Force Base in the F-35, and, a couple of weeks ago, we sent 10 F-35’s up to Nellis Air Force Base, for the first-ever large scale deployment of the F-35. We did it just because we could, and we could showcase what an amazing plane this is.”

At the heart of this training center is the Lockheed Martin-built F-35 Full Mission Simulators. With a capacity of up to twelve simulators, Luke’s ATC will realize the full benefit of these simulators over time. The Lockheed FMS includes a high-fidelity 360-degree visual display system and is the highest fidelity trainer in the F-35 pilot-training-device suite, accurately replicating all F-35 sensors and weapons deployment.

At least 30% of training flights typically done with live flying can now be flown in simulator missions. This will be realized as an extensive cost savings over time. Less live flying translates to less fuel used, less wear-and-tear on the aircraft, and other cost savings that factor in as benefits of the JSF program.

The first F-35 training class at Luke began on May 4, 2015 and contained two F-16 instructor pilots and two A-10 instructor pilots. Academic and simulator training takes part in Luke’s state-of-the-art F-35 Academic Training Center (ATC), while the flying portion of the training will take part at the squadron level. All the pilots in this current class are being trained to be F-35 instructor pilots. Coming from other airframes, a background in each airframe has it’s specific advantages and disadvantages for pilots transitioning to the F35. For the A-10, the lack of a two-seat version, much like the F-35, has the pilots flying by themselves when they are ready to fly. With a simulator-intensive training program such as the F-35’s, pilots can fly realistic missions before actually flying the aircraft. As Capt Kyle Babbitt, an A-10 instructor pilot with the 303rd Fighter Squadron out of Whiteman Air Force Base in Missouri, who is in the current F-35 training class stated: “We will not start flying for another month. There are very extensive simulator schedules and academic schedules so we are extremely prepared for our first flight.” Capt Babbitt later added: “The A-10 and the F-35 do not have two-seater versions so it will be real similar when you first takeoff by yourself.”

F-35 training at Luke will not be limited to training USAF pilots. A total of seven partner nations and three foreign military sales nations will also train at Luke. As Gen Pleus stated: “One of the things that stands out more than anything is the fact that this is historic, not just for the fact that this is a United States Air Force investment in our future, it’s also an investment with our allies. Over the next few years, we will welcome ten country’s air forces to train here. Australia has already arrived, with squadron leader Jackson as an instructor pilot in the 61st fighter squadron and we have two of their jets right out there on the line with their kangaroos painted on the side. Over the next few years, Norway and Italy will arrive, then Turkey, the Netherlands, Denmark, Canada, Israel, Japan, and South Korea will all train their F-35 pilots right here at Luke.” 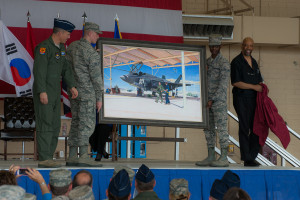 The unveiling of the new 56 FW lithograph. The artist, Charles Lilly is on the right.

Luke AFB has a long history of training fighter pilots that dates back over 74 years. The access to training ranges, mild weather, and community support make Luke an ideal location for training fighter pilots. As Gen Pleus mentioned: “The reason Luke was picked would be far ranging. It could be that we have the national treasure known as the Barry M. Goldwater Range, a range the size of New Jersey, just to ourselves. It could be the fact that we have 300 plus days of sunshine without any clouds, that could be why. But, I would tell you that the main reason why Luke Air Force Base was chosen is all of the above, and the community support was the icing on the cake.” 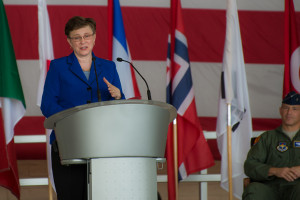 Because of the extensive partner nation/foreign military sale nation participation and the sophisticated technology involved with the aircraft, training tools, and maintenance aids, Lockheed Martin works closely with the F-35 team at Luke to ensure that the team is properly supported. “We would not be quite ready for the training that we are today if we did not have the support of some great people who put us to where we are. The first is the team that built the airplane, Lockheed Martin. Beyond the obvious, design, test, and production of the airplane, they have been a key partner in helping us prepare and execute the mission right here at Luke. The industry component at Luke that is assigned here from Lockheed Martin helps train our pilots, fix our airplanes, and manage our supply lines. Right now we have just over 160 Lockheed Martin teammates that are working. And, by the time we finish, over the next 3 to 4 years, we will have over 700 Lockheed Martin professionals working, flying and training our airplanes and our pilots every day,” said Gen Pleus.

While the F-35 pilots will be trained at Luke AFB, F-35 maintainers will continue to be trained at Eglin AFB in Florida. However, it is foreseeable that F-35 crew chiefs could be trained at Luke in the future much like the F-16 crew chiefs are trained there today. In the meantime, Luke AFB and the 56 FW will continue to do what they do best…train fighter pilots. Since 1941, Luke AFB has graduated over 61,004 pilots. Specific to the F-16, more than 17,878 pilots and 11,237 crew chiefs have graduated from Luke. Lorraine Martin had this to say about the training at Luke: “We (Lockheed Martin) have every expectation that Team Luke will set the standard for F-35 training as you have done with the F-16, the most successful 4th generation fighter the world has ever known. It is no secret the success of the Viper relies much more on just the aircraft, it truly has been the fighter pilots and maintainers who were trained here at Luke that have made that possible for ourselves and our allies around the world.”

While the 56 FW at Luke AFB moves forward with an updated mission, another F-35 milestone is on the horizon. In June 2015, the 62nd FS is scheduled to become the next F-35 squadron at Luke. The 62nd FS is slated to be a partner squadron with Norway and Italy. For now, and the future, as Lorraine Martin put it: “Luke is and will be, for decades, the epicenter of F-35 pilot training.”

APD would like to thank Capt Ryan DeCamp, Kiley Dougherty, 2nd Lt Tanya Wren, and the remainder of the 56th FW Public Affairs team for their assistance throughout the event.

Steven can be reached at: sv[email protected]
Send this to a friend
SUBSCRIBE TO OUR NEWSLETTER
All rights reserved © Aviation Photography Digest, 2022
Subscribe to our FREE newsletter and get notified when new articles are published.
Subscribe
×