Report and photos by Scot Meek 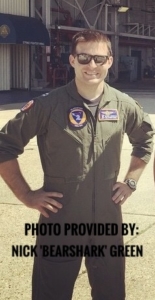 The U.S. Navy TACDEMO Teams are an airshow attraction that draws the spectator numbers and popularity that often rival that of the display teams such as the Blue Angels and Thunderbirds.

The Navy TACDEMO Team actually consists of two separate teams, a team from the ‘Flying Eagles’ of VFA-122, home stationed at Naval Air Station Lemoore, California, and a team from the ‘Gladiators’ of VFA-106, stationed at Naval Air Station Oceana, Virginia. VFA-122 and VFA-106 are the Fleet Replacement Squadrons (FRS) for the Legacy Hornet and Super Hornet squadrons. The primary mission of a FRS is to train newly designated Strike-Fighter aviators as well as transition aircrews into the intricacies of operating and employing the F/A-18A-D Hornet and F/A-18E/F Super Hornet to its fullest capabilities.

The airshow Tactical Demonstration or “TACDEMO” display is flown by the instructor pilots of VFA-122 and VFA-106 and is designed to highlight the mobility, versatility and power of the F/A-18 Hornet and Super Hornet aircraft to airshow spectators and also as a recruiting tool to showcase the importance of Naval Aviation and its aircraft.

While covering the Tinker AFB 75th Anniversary airshow, Aviation Photography Digest contributor Scot Meek had the opportunity to sit down with Lt. Nick ‘Bearshark’ Green, one of the demo pilots for the U.S. Navy TACDEMO Team.

APD: What Squadrons were you with prior to flying with the US Navy TAC DEMO Team?

Bearshark: Prior to flying at VFA-106 (current squadron) I was at VFA-105 the Gunslingers.

APD: What is the selection process like for a Navy TACDEMO  applicant?

Bearshark: Once you join the squadron, you express interest in joining the team and CO of the squadron then selects you based on seniority, proficiency, and flight hours. If selected, you then go though a training syllabus and are ultimately approved by the Commodore of the respective coast.

APD: Do you only fly the Legacy Hornet Demo’s?

Bearshark: Yes, although I am a Super Hornet pilot by trade. I was fortunate to grab a dual qual and now fly the Legacy demo.

APD: From your perspective…. What is the hardest maneuver during a Navy TACDEMO display?

Bearshark: Although the entire routine is a challenge… the back side of the Half-Cuban Eight is challenging. The negative-G and the roll timing, make it an extra challenge.

APD: How do you mentally prepare yourself before you launch for a Demo flight?

Bearshark: Every time I will brief with the safety observer (usually a fellow pilot).  Every time I will mental rehearse or “chair-fly” the routine and will factor in any obstacles from the overall brief or challenges specific to the airshow site.

APD: What is the most exciting moment during your tenure as a Navy TAC DEMO pilot?

Bearshark: So far the highlight as been preforming for my family at the Tinker AFB show.  Still in my first season so I’m sure there are plenty more highlights to come.

Bearshark: Not sure scary is the word, but the first airshow is always a rush. There is a ton of adrenaline pumping and you’re nervous preforming these maneuvers in front of a crowd.

APD: How did you get your callsign?

Bearshark: I have scars on my head from a surgery when I was young.  When I joined my first squadron (Gunslingers) they asked me why I had a scar on my head? I made up a story about a bear attack and subsequently changed it to a shark attack.  They came up with the name Bearshark or BS for short.

Aviation Photography Digest would like to sincerely thank the U.S. Navy TACDEMO Team and pilot Lt. Nick ‘Bearshark’ Green for their time and giving us insight into the Navy TACDEMO community. It is greatly appreciated!!