Report and images by Scot Meek

The weekend of 20-21 May 2017, Tinker AFB hosted the Star Spangled Salute Airshow, celebrating the bases’ 75th Anniversary and the 70th Anniversary of the United States Air Force. 2014 was the last airshow that Tinker hosted, so anticipation was running high. The list of static aircraft included all of the ‘heavies’ that are home based at Tinker AFB and are often seen in the local flight pattern… The E-3G Sentry of the 552nd Wing, with its interior open to the airshow public and large frisbee-like radome turning on the rear spine of the aircraft..seems to always draw large numbers of intrigued airshow spectators. The KC-135R Stratotanker and the U. S. Navy’s E-6B Mercury were on display…but not open. Also on static display were a B-52H Stratofortress named ‘Christine’, after the famed possessed Chrysler 300 movie car, a Altus based C-17 Globemaster, a B-1B Lancer, and a MC-130J Hercules. The aerial acts on the schedule included several aerobatic pilot’s, several WWII era aircraft fly-by’s and a Vietnam War era ‘Downed Pilot Rescue’ close-air support mission simulation. That demo included, not only an A-1E Skyraider…..but also a AD-5 Skyraider, C-7 Caribou and C-47 Skytrain. It was quite a treat to get to see those aircraft airborne.

The demos that were more of a modern flavor included a ‘Saturday only’ B-2 Spirit fly-over with multiple passes, the U. S. Navy TAC DEMO Team, flying the F/A-18C Hornet and the F-35 Lightning II Heritage Flight Team. The appearance of the F-35 Heritage Flight Team at the Star Spangled Salute Airshow, marked the first occasion that the USAF newest jet could be viewed by the general public in the state of Oklahoma. And last…but certainly not the least… the Star Spangled Salute Airshow headliners…the 2017 U. S. Air Force Thunderbirds.

With the remnants of the dustbowl still effecting daily living in Oklahoma, and the thought that the United States was on the cusp having getting involved in a global conflict…on 8 April 1941..the War Department announced that Oklahoma City was the selected location for a future Aircraft Maintenance Depot.

On 23 January 1942,shortly after the Japanese attack on Pearl Harbor and less than a year since being selected as the new Depot location, Douglas Aircraft Company also selected Oklahoma City as the location for a new Aircraft Assembly plant. The planned assembly plant would be built adjacent to the Air Depot facilities and employ approximately 24,000 workers. Once complete….this new plant would be the birthplace of the (then) new Douglas C-47 Skytrain. Once nothing but an open pasture, the ‘Midwest Air Depot’…its name at the time, quickly grew in size and activity. At its peak employment numbers during the WWII conflict, the Douglas assembly lines were employing close to 23,000 people who were turning out 13 brand new C-47 Skytrain airframes per day. Meanwhile,the Air Depot building adjacent to the Douglas Assembly Plant, was just as busy, with an additional 13,500 workers conducting maintenance and modification on several different types of aircraft, bringing the total manpower to 36,500 laborors. Of those 36,500 laborors,over half the workforce was comprised of women, playing a significant role in making ‘Rosie-The-Riveter’ a cultural icon.

By the end of WWII, the Douglas Assembly plant had cranked out a staggering 5,355 total C-47 Airframes. To put that into perspective, approximately 5,032 +/- aircraft are currently on the entire
USAF inventory overall.

On 14 October 1942 the location was officially named Tinker Field, to honor Major General Clarence L. Tinker. MG Tinker lost his life while leading a flight of LB-30’s on a bombing mission against the Japanese during June 1942.
MG Tinker was a Wentworth Military Academy Alumni and was awarded his Aviator Wings in 1921. Major General Tinker was also a former resident of Pawhuska,Oklahoma and a member of the Osage Indian Tribe, and was the very first individual of native american heritage to achieve the rank of Major General in the U.S. Army Air Corps.

When WWII finally came to an end though, the Douglas C-47 assembly line ceased production at Tinker. Due to the size of the location and the workforce no longer being utilized,concerns grew very rapidly among the residents of Oklahoma City and the surrounding suburbs about the fate of Tinker resulting from the post-war downturn. Rumors of a base closure were rampant. But as it turned out..the concern over the fate of the base was unfounded. Unlike other military installations, Tinker withstood the issues of a post-war economy, and the base continued to expand, with maintenance and overhaul work being completed on the B-17 Fortress,the B-24 Liberator,and the B-29 Super Fortress. Now… Tinker is the largest single-location employer in Oklahoma and is second only to Wal-Mart as the largest in the entire state. The Oklahoma City Air Logistics Complex…is also the largest of the 3 depot-level maintenance facilities in the Unites States.

The installation land mass covers approximately 9 square miles of real estate…and plans are currently in work to expand the base even further toward the east on the eastern side of Douglas Blvd.

On any given day, approximately 26,000 civilian and military personnel pass through the gates of Tinker to maintain, overhaul and repair aircraft and aircraft parts for many different types of aircraft. Depot level maintenance and repair is conducted on Boeing 707 airframes here. The 707 is the base model for several types of USAF aircraft being currently operated, including the E-3 Sentry (more commonly known as AWACS), KC-135’s, C-135’s, RC-135 Cobra Ball, E-8 JSTARS and the U.S. Navy’s E-6B Mercury… Maintenance is also done on the the C-130, and all 3 USAF bomber aircraft types undergo life-extending maintence as well. Those are the B-1B Lancer, B-2 Spirit and B-52 Stratofortress.

The first B-52 to make its maiden flight was in August 1954…and the type getting is getting old enough, that each aircraft has likely been at Tinker more than once to be overhauled.

Tinker is also the home to the 552nd Airborne Control Wing (AWACS)..that operate the largest fleet of E-3 Sentry’s. Of the 31 total E-3 Sentry airframes in the USAF inventory, 27 of those aircraft are assigned to the 552nd Wing.
Also home based at Tinker, are the ‘Okies’ of the 507th Air Refueling Wing. The 507th is a longstanding Air Force Reserve tanker unit that flies the KC-135R Stratotanker. Before getting assigned the tanker mission, the unit previously flew the F-16 Viper and the F-4D Phantom. While operating the F-4D, the unit operated no less than 4 different historic MiG killer F-4’s in their squadron on a daily basis. Located adjacent to the 507thARW facilities,is the U.S.Navy’s Strategic Communications Wing-1. STRATCOM-1 is comprised of the VQ-3 ‘Ironmen’ and the VQ-4 ‘Shadows’ tasked to execute the ‘Looking Glass’ missions that were formerly conducted by Air Force EC-135C.

Currently.. Tinker, and its workforce of 26,000 people, provide world-class logistics, depot-level aircraft maintenance, refurbishment and overhaul. Their work is not only vital to the USAF, but to all branches of service of the United States and several armed forces of foreign countries.

With the F-35 airframes continuing to roll off the Lockheed-Martin assembly line, and KC-46 production beginning in the near future…Tinker will continue to grow in size, workforce and importance to America’s Military Readiness for the next 75 years. 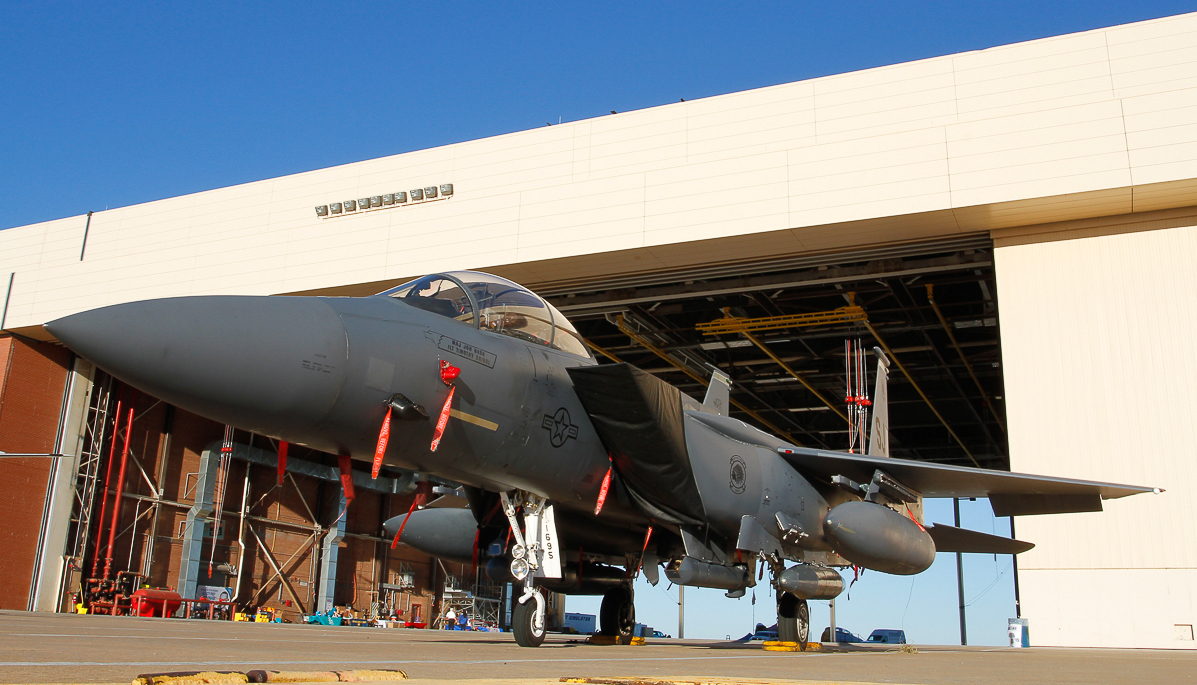 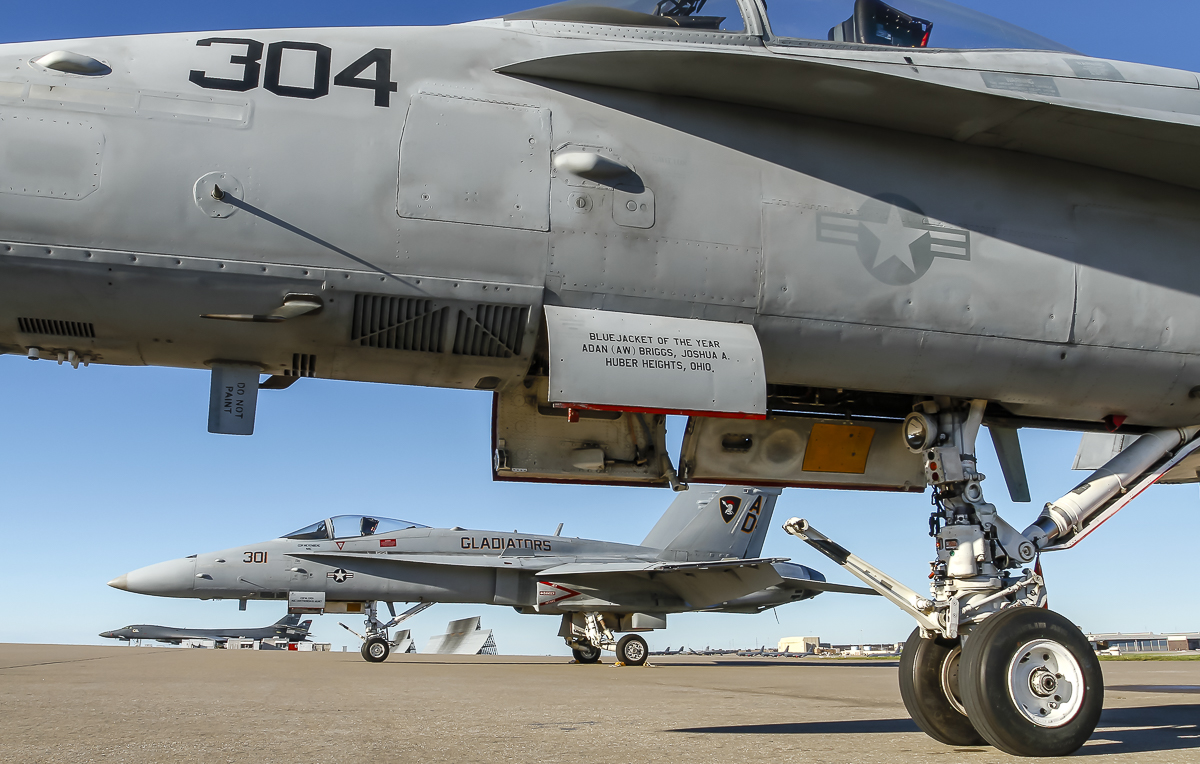 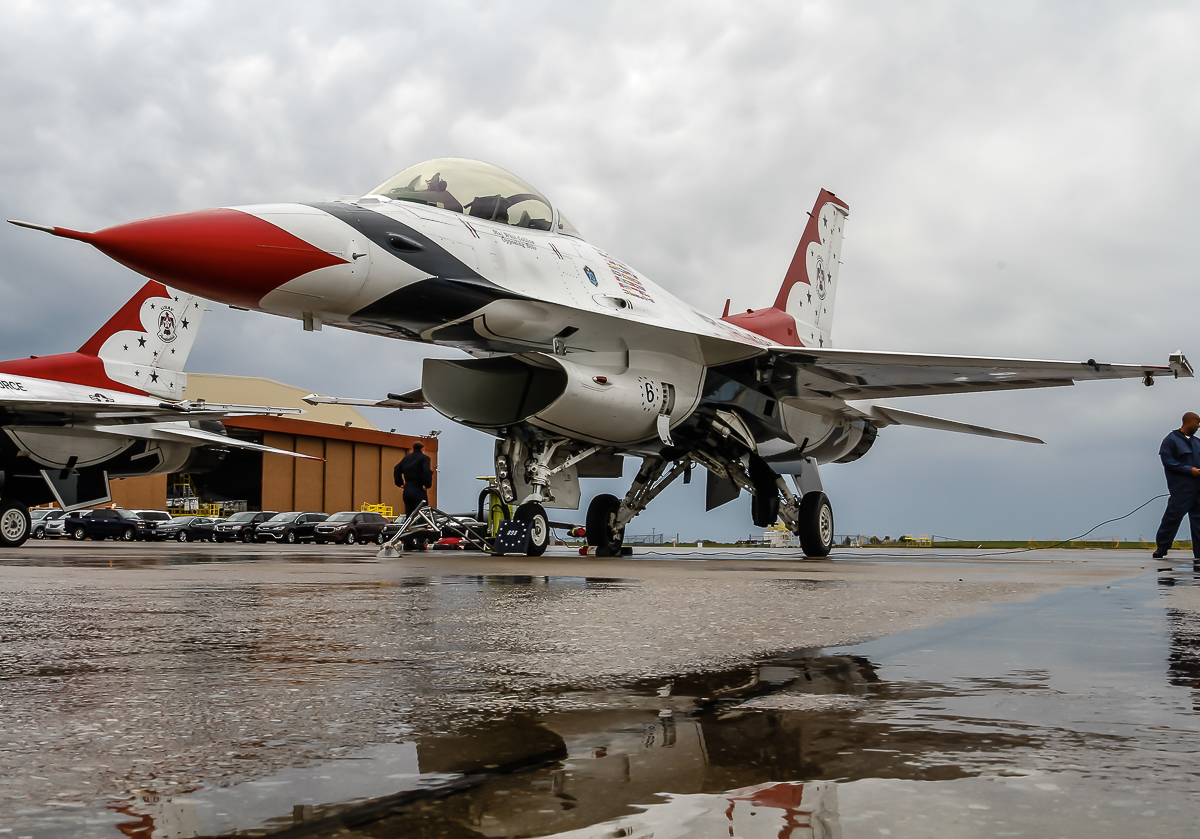 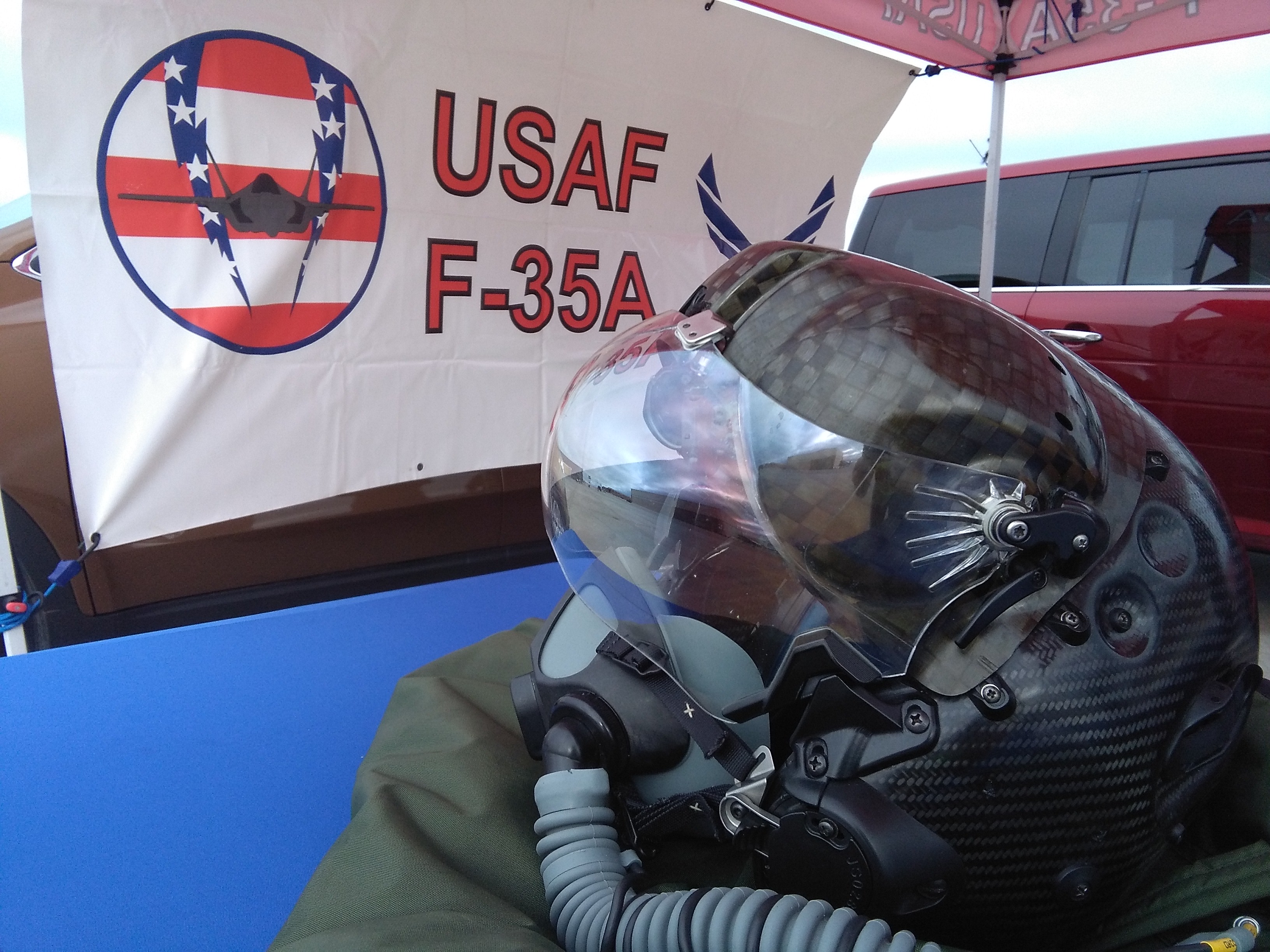 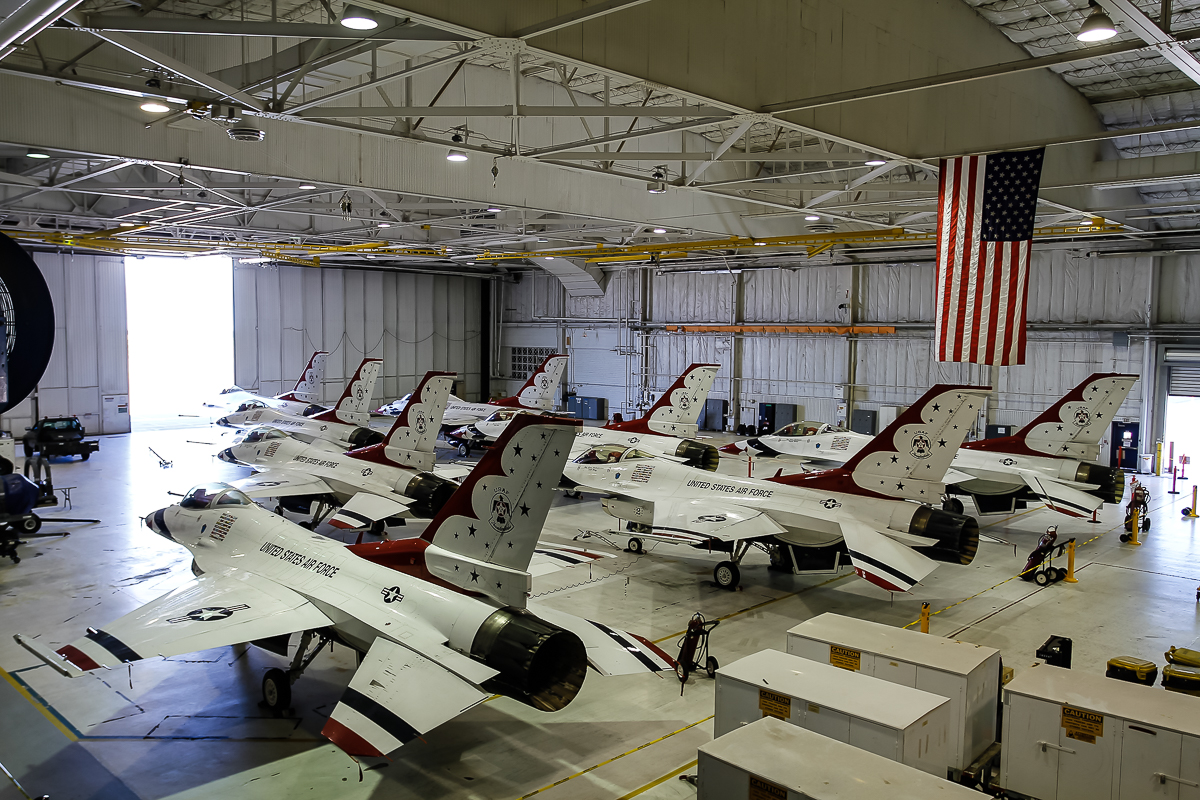 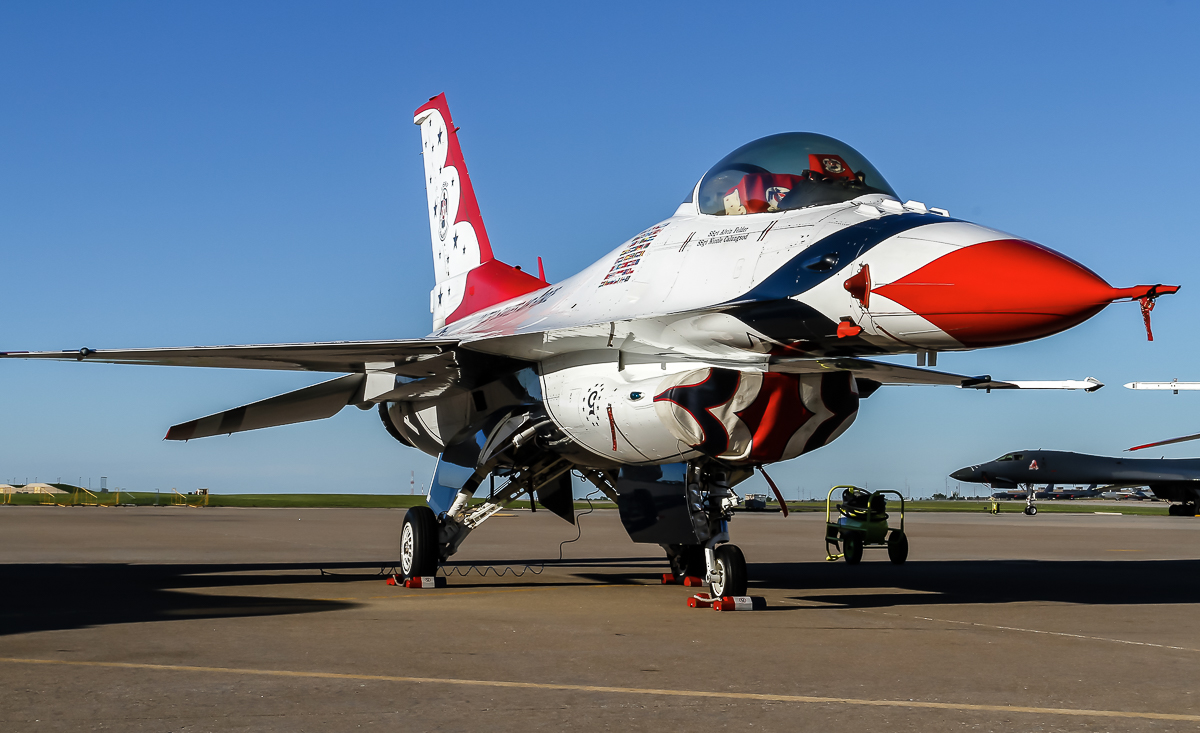