Home » Articles » Aircraft » Through the Lens: The A-10 Warthog

Through the Lens: The A-10 Warthog

Since the glory days of the Grumman F-14 Tomcat, no aircraft has made more of positive impact on the perception of American airpower than the beloved A-10 Warthog. Earning its reputation during the Gulf War where the A-10 destroyed more than half of Iraq’s 1700 tanks and many armored personnel vehicles, the A-10 has been the king of close air support.

Words and Photos by Steven Valinski

The Fairchild Republic A-10 Thunderbolt II, known affectionately as the A-10 Warthog, or simply “Hog” or “Hawg”, entered service with the United States Air Force (USAF) in 1976. Born out of lessons learned during the Vietnam War, the A-10 Warthog was designed and built solely for close air support (CAS).

Often referred to as an aircraft built around a gun, the A-10’s primary weapon is the seven-barrel 30 mm GAU-8/A Avenger Gatling-type cannon. Capable of firing off 30mm shells at a fixed-rate of 3,900 rounds per minute, the GAU-8/A Avenger is capable of utilizing three different types of rounds:

With a 30mm shell about the size of a beer bottle, the A-10’s gun is designed to take out enemy tanks and vehicles with deadly precision.

Using an AN/AAQ-28 LITENING targeting pod, the A-10 can utilize a variety of additional weapon systems including: GBU-38 Joint Direct Attack Munitions (JDAM), AGM-65 Maverick missiles, GBU-12 Paveway Laser Guided Bombs (LGB) and a variety of other guided and non-guided bombs and other munitions which can make use of the A-10s 11 stores (weapons pylons).

A-10 pilots currently utilize the GENTEX – Raytheon Scorpion Helmet Mounted Cueing System (HMCS) as a Helmet Mounted Integrated Targeting System (HMIT). According to GENTEX the Scorpion HMCS is: “designed to provide the U.S. airborne warfighter with the ability to rapidly ‘cue’ (or steer) sensors or weapons, and to designate targets with a high degree of accuracy, by simply “looking at” the target or point of interest.”

Because the A-10 is designed for CAS missions which often require low level strafing and attacks, the A-10 was designed and built with durability, survivability and protection of the pilot in mind.

The A-10’s cockpit is protected underneath by a titanium tub, often referred to as the “bathtub,” that is designed to withstand up to 23 mm cannon fire and single strikes from up to 57 mm rounds. Weighing 1,200 lb (540 kg), the “bathtub” is 6 percent of the A-10’s weight.

Utilizing two General Electric TF34-GE-100A non-afterburning turbofans, the A-10 can still be flown if one engine is inoperable. With the engines up high, above the fuselage, they are not easily exposed to ground fire and ingestion of foreign objects. With self-sealing fuel lines, all four fuel tanks are located inside, and are not part of, the A-10’s fuselage.

On April 7, 2003, while flying a mission over Baghdad during Operation Iraqi Freedom, Captain Kim Campbell’s A-10 took on heavy anti-aircraft artillery (AAA) damage. With hundreds of holes in the airframe, damage to one engine, damage to the hydraulic and other systems, Capt. Campbell was able to successfully return to base safely.

There is no weapon in our arsenal that offers more effective close-air support to American ground troops serving in harm’s way than the A-10 aircraft.”

Here to Stay (for now)

Originally, the plan was for the A-10 to be in service until at least 2028. Due to budgetary constraints, this original plan changed. In the USAF’s 2015 budget, it was proposed that the A-10 be “mothballed” which could result in a savings of $3.7 billion from 2015 to 2019. The USAF’s thinking was that the Lockheed Martin F-35 Lightning II and other USAF aircraft such as the General Dynamics F-16 Fighting Falcon and Rockwell B-1B Lancer could take on the CAS missions of the A-10 using precision guided munitions.

With the ongoing operations in the Middle East against ISIS, the A-10 is being heavily depended on to attack and degrade ISIL assets. With several A-10 units already deployed and more deploying soon, the A-10 has been proving that it can be a very effective solution against ground operations such as the ISIL movement.

In a speech delivered this month, U.S. Defense Secretary Ash Carter announced the Pentagon now plans to retire the A-10 aircraft in 2022.

U.S. Senator John McCain issue a statement supporting the decision: “There is no weapon in our arsenal that offers more effective close-air support to American ground troops serving in harm’s way than the A-10 aircraft.”

Although the planned retirement of the A-10 is now 2022, the fiscal year 2017 USAF Force Structure Action plan shows that the USAF would like to start phasing out A-10 units beginning  in fiscal year 2018. The first units to lose A-10s would be the 303rd Fighter Squadron (303 FS) out of Whiteman Air Force Base in Missouri (KC tail code) and the 163rd Fighter Squadron (163d FS) out of Fort Wayne Air National Guard Station, Indiana (IN tail code). Both of these units would become F-16 units after the transition. Any plans by the USAF still require approval from the U.S. Congress, however, the plan shows how determined the USAF is to phase out the A-10.

There is no better display of the abilities of the A-10 Warthog than in the biennial Hawgsmoke competition.

Hawgsmoke’s roots began with the USAF’s air-to-ground gunnery and bombing competition entitled “Gunsmoke”. Gunsmoke originally began in 1949 and was held at Nellis AFB in Nevada from 1954 to 1995. The first official USAF Hawgsmoke competition officially began in 2000 and took place at the Alpena Combat Readiness Training Center in Michigan.

Hawgsmoke is a worldwide A-10 bombing, missile, and tactical gunnery competition designed to draw on the A-10’s Close-Air Support (CAS) capabilities.

Now, we take a look at the Fairchild Republic A-10 Thunderbolt II “Warthog”, “Through the Lens”… 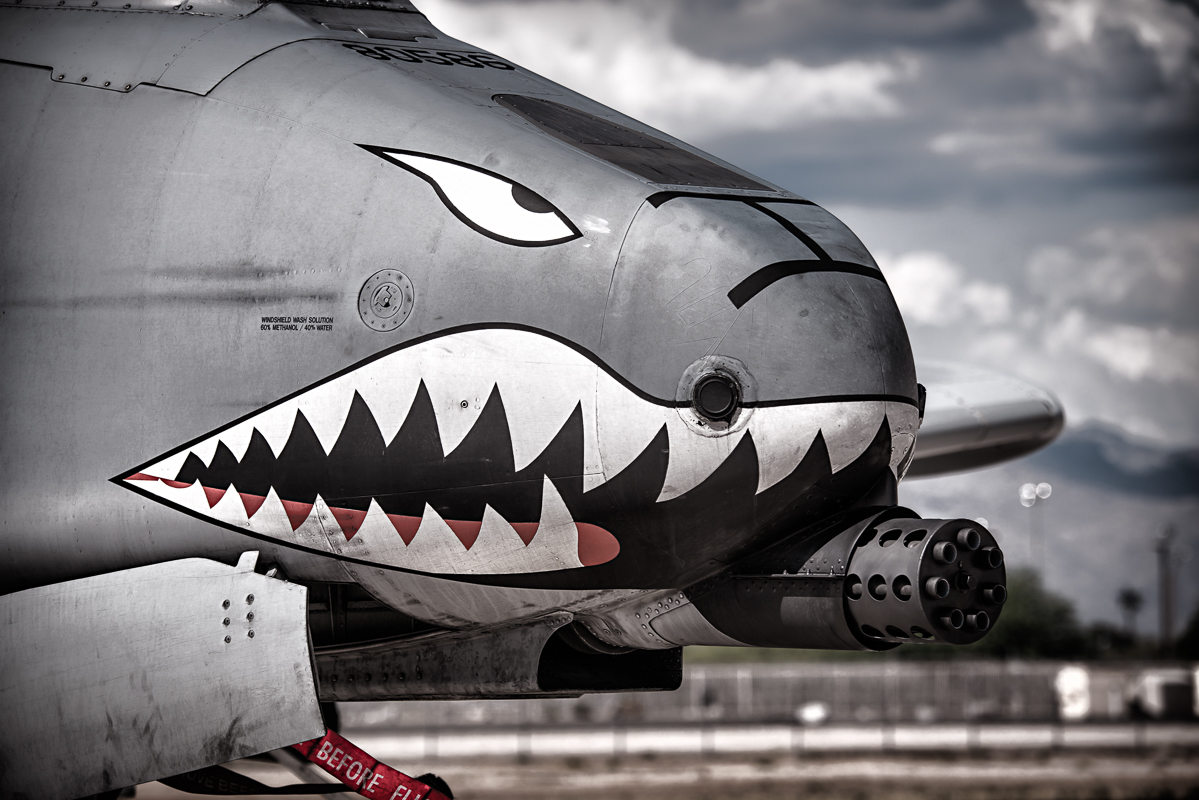 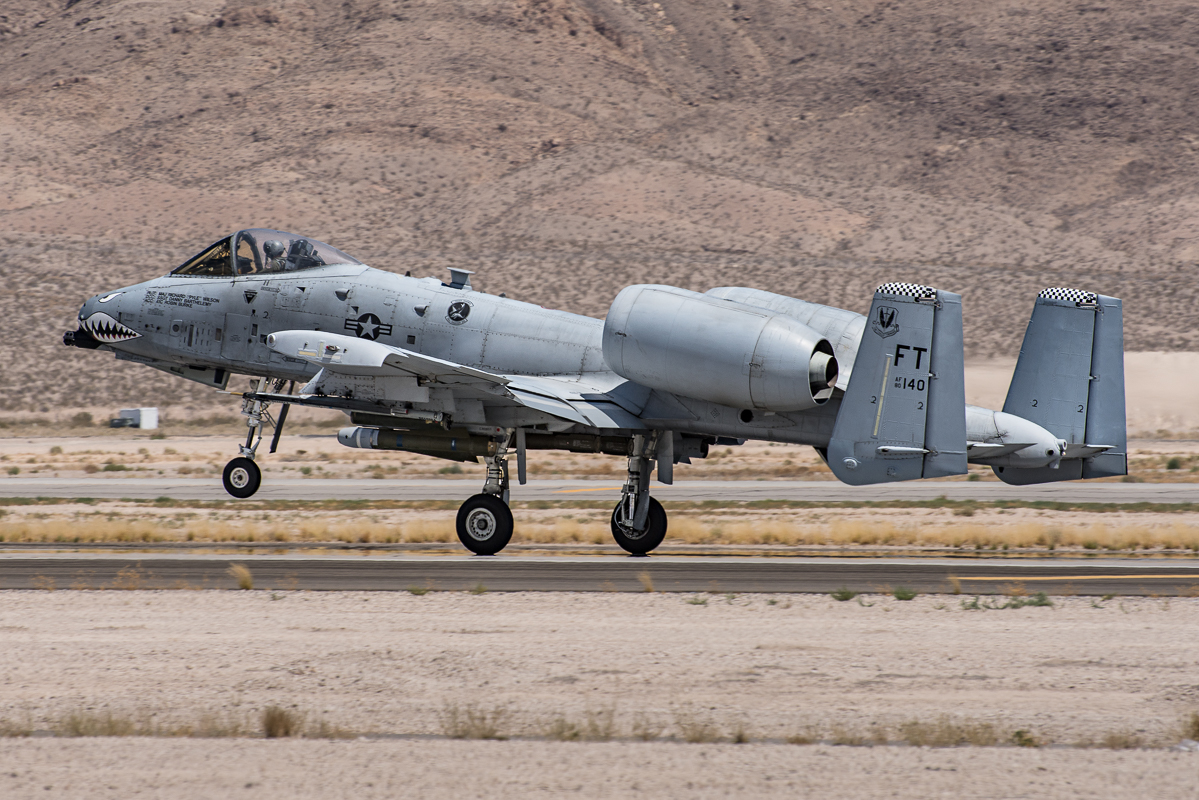 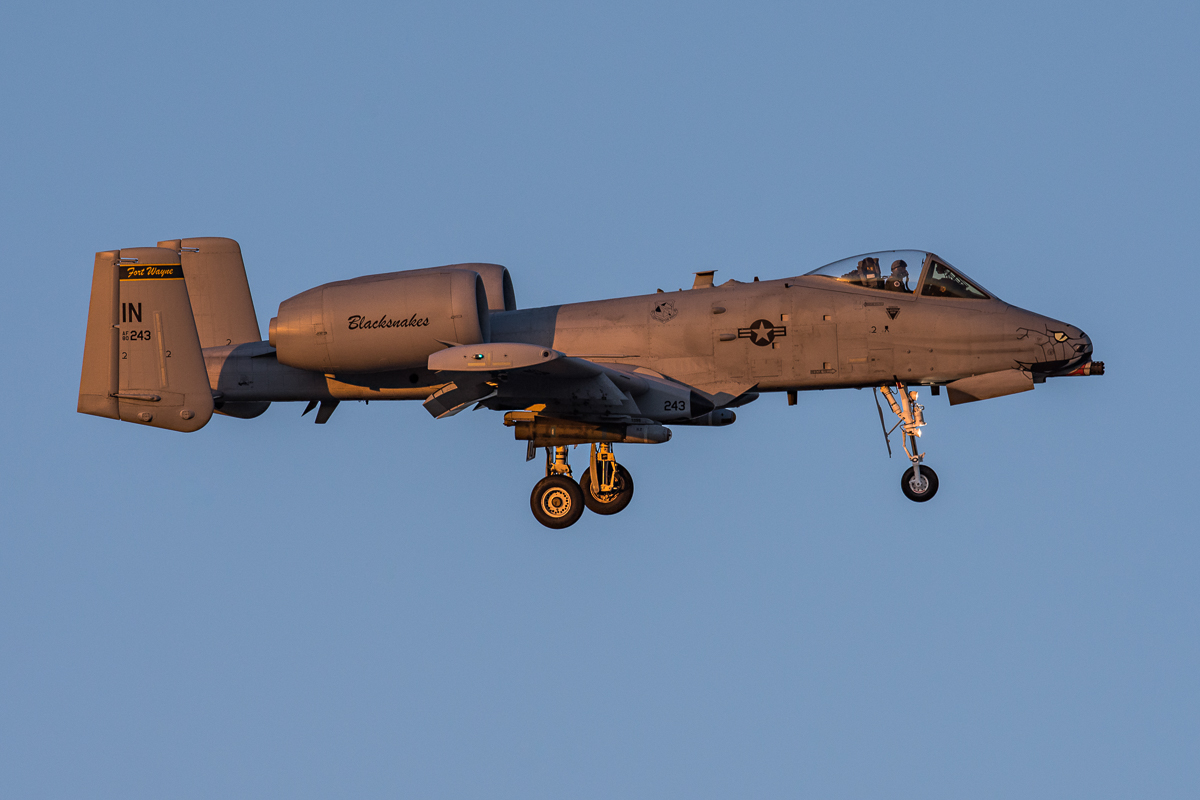 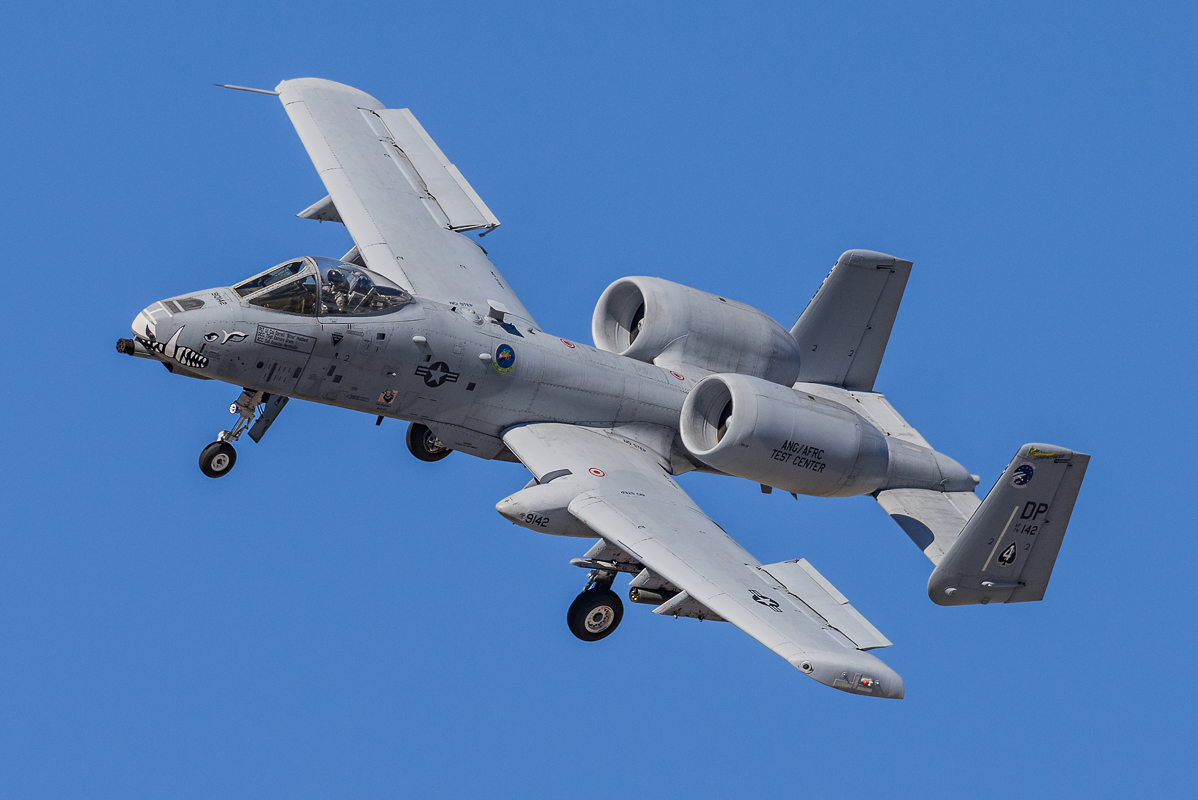 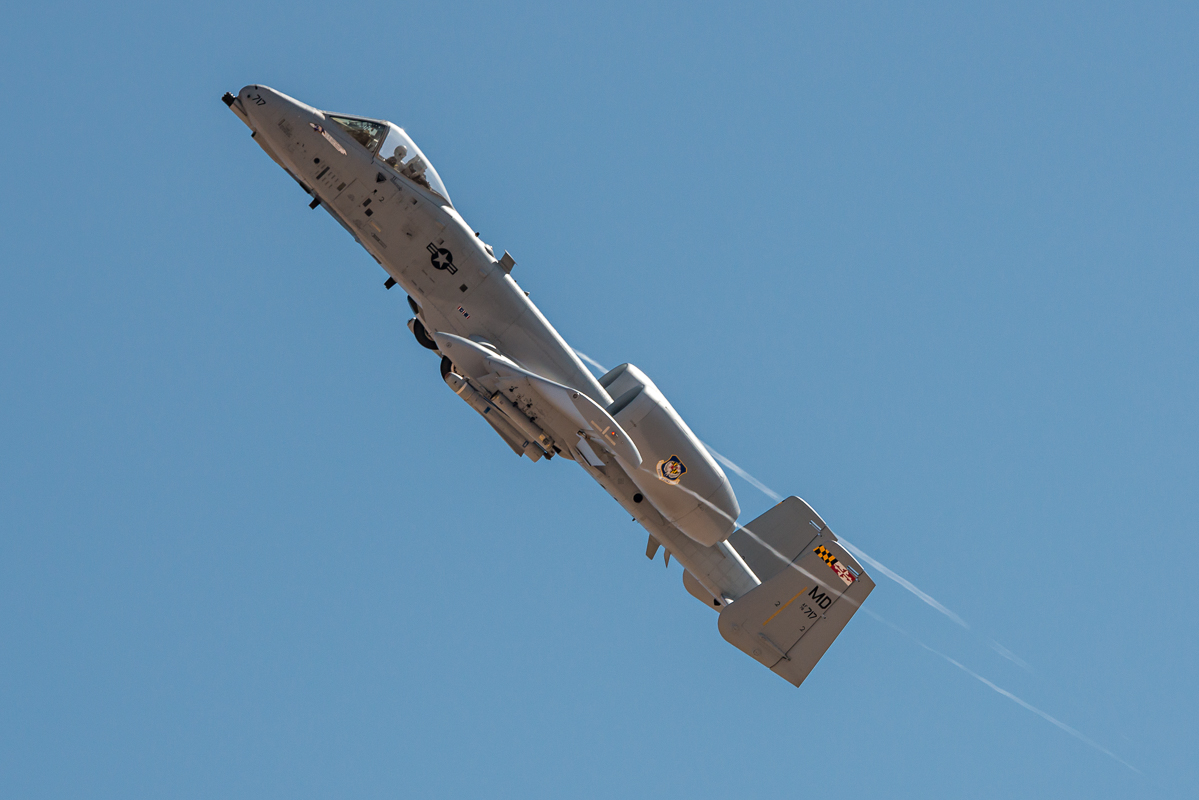 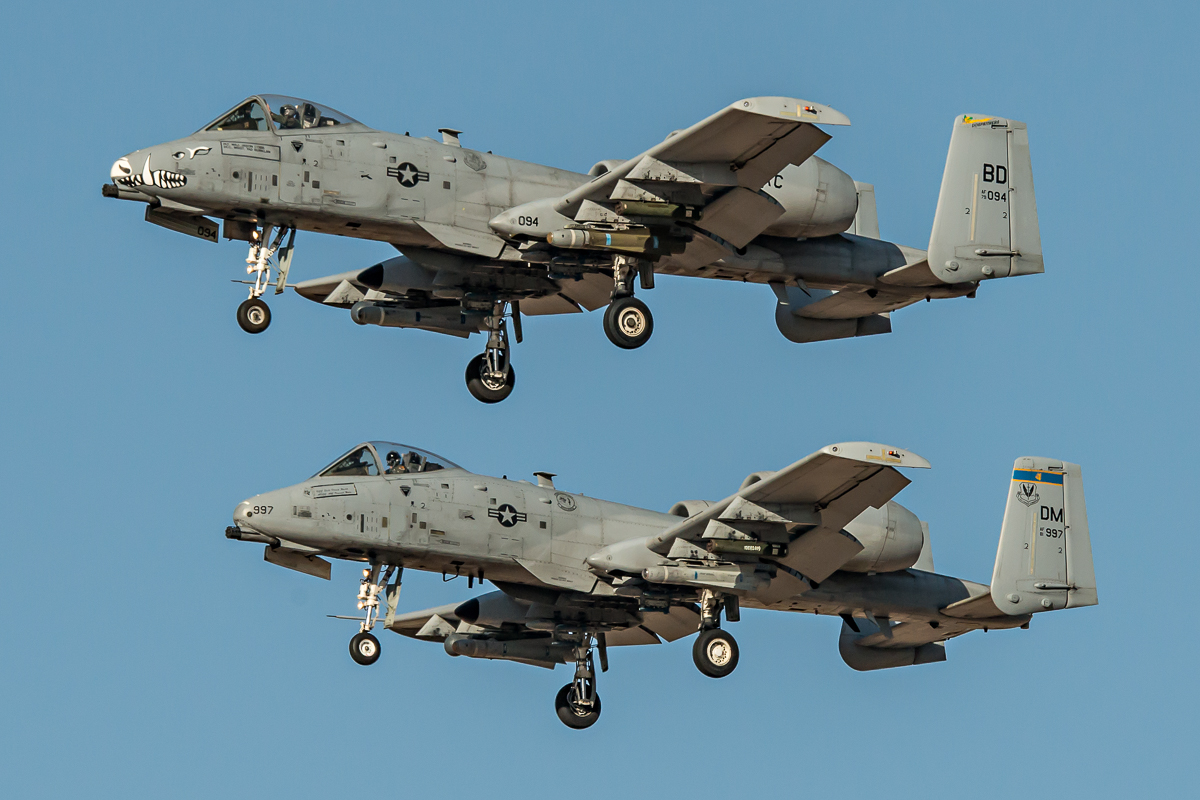 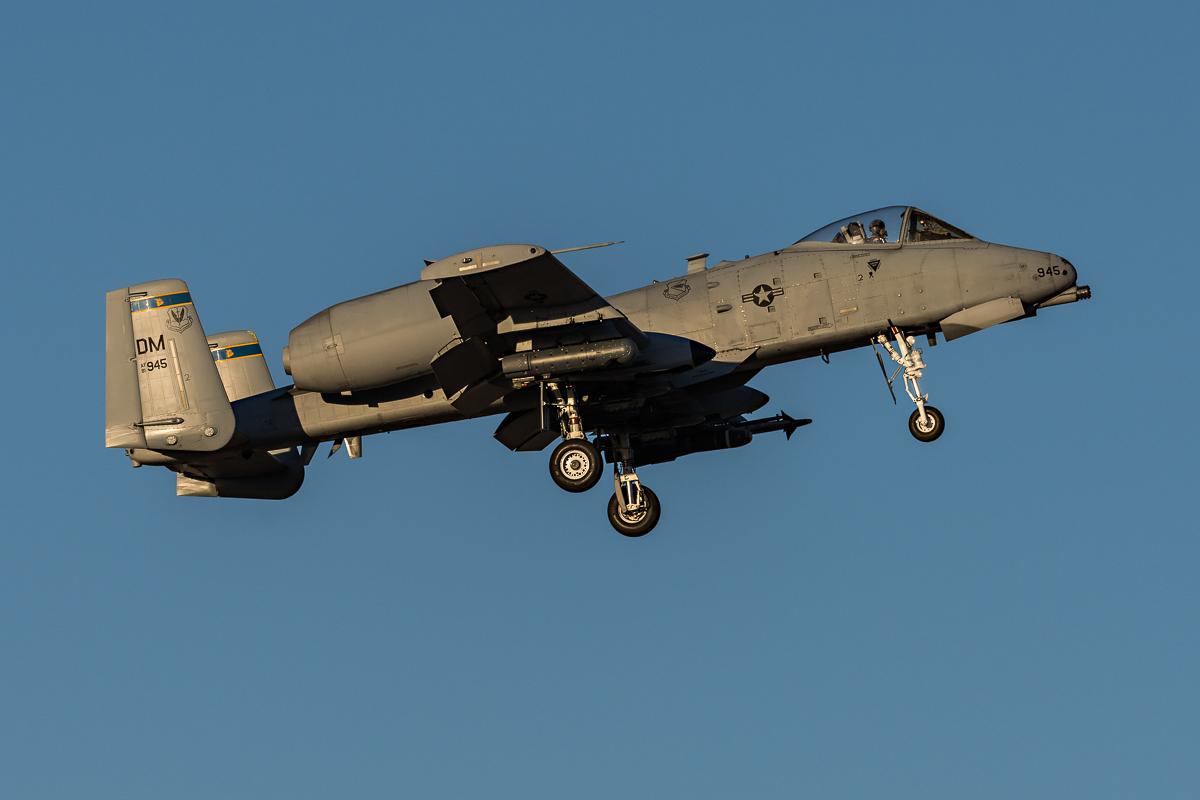 Another sunset arrival at Davis-Monthan AFB 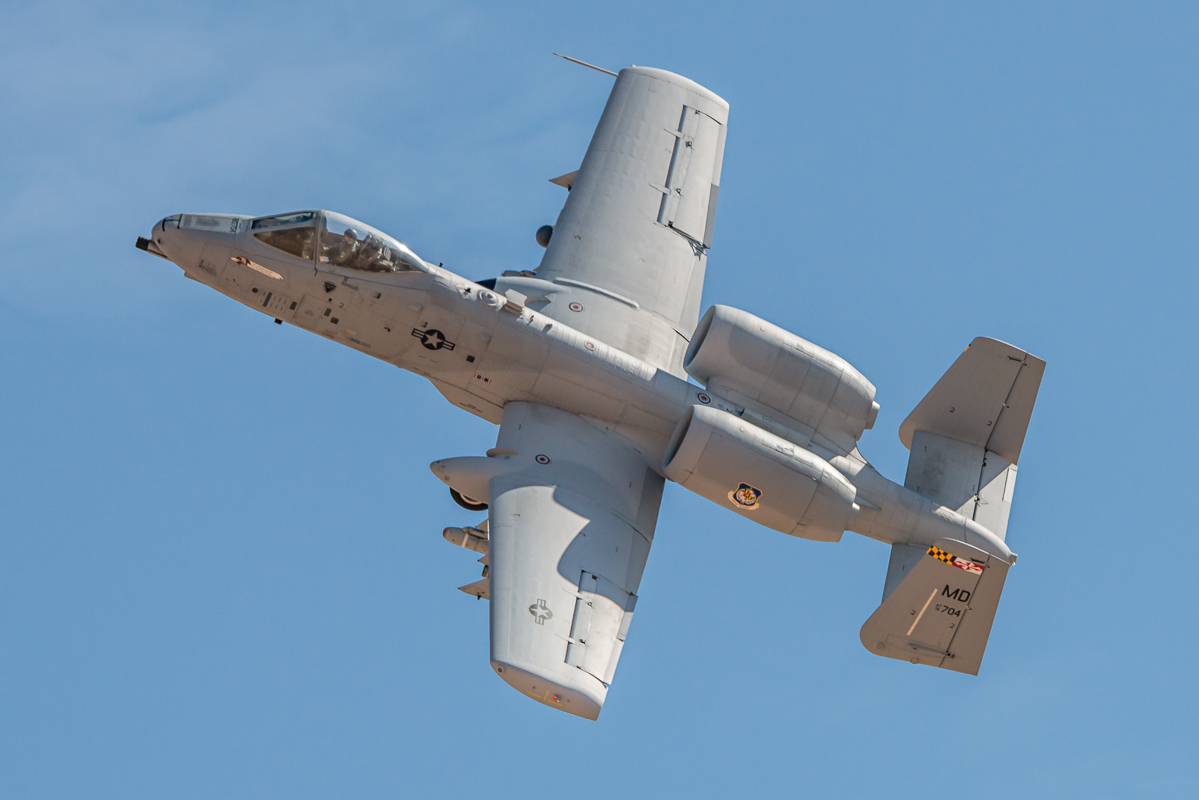 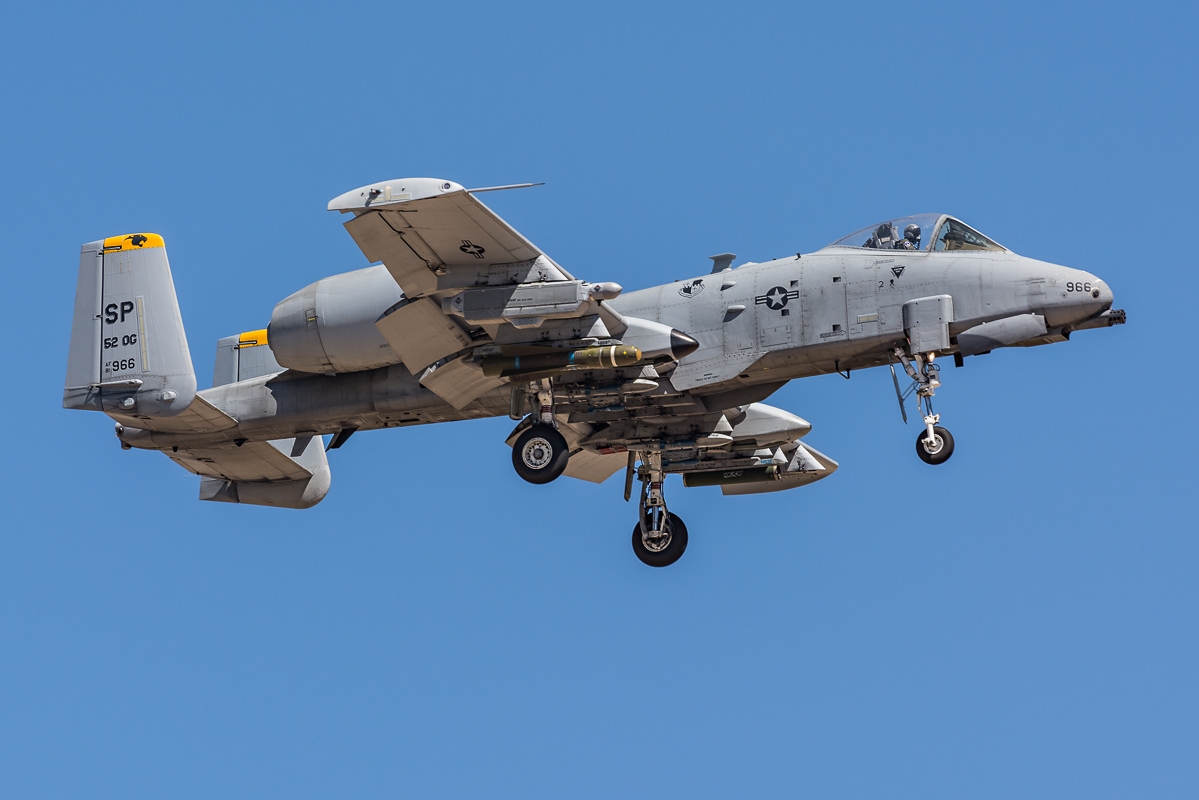 An A-10 that was based at Spangdahlem Air Base, Germany arrives at Davis-Monthan AFB 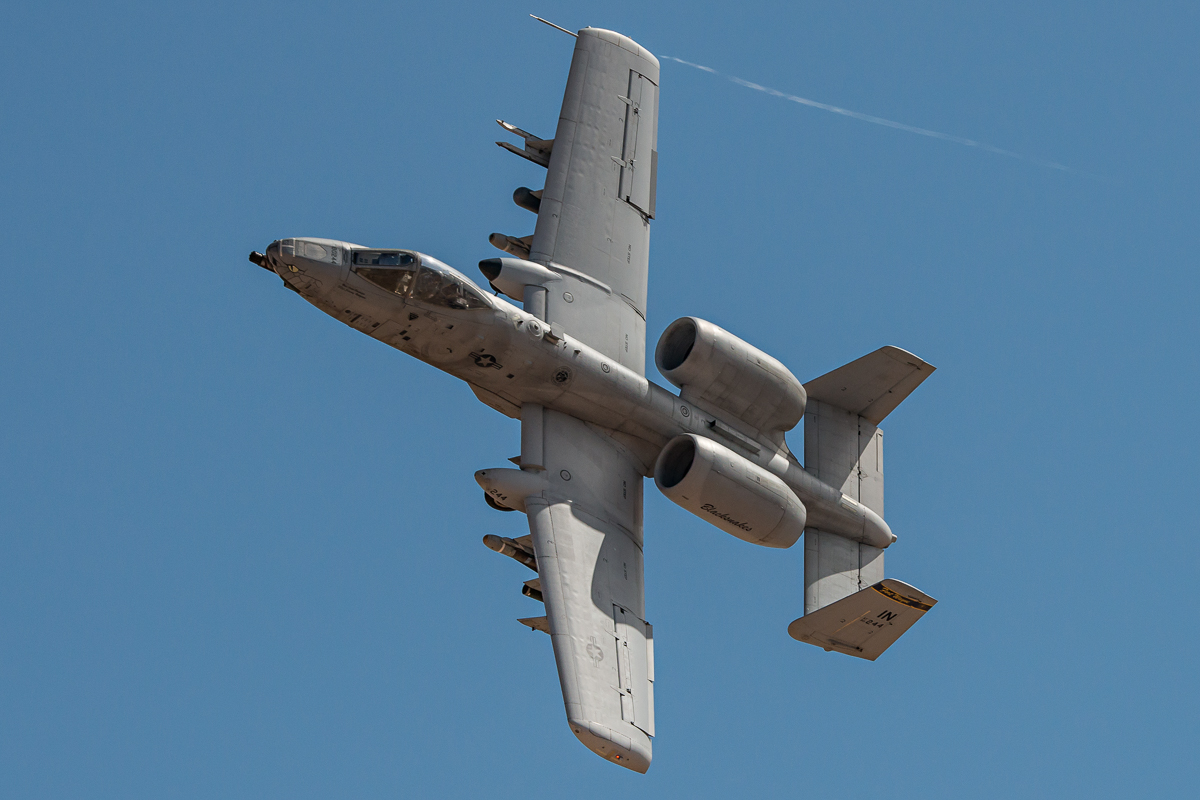 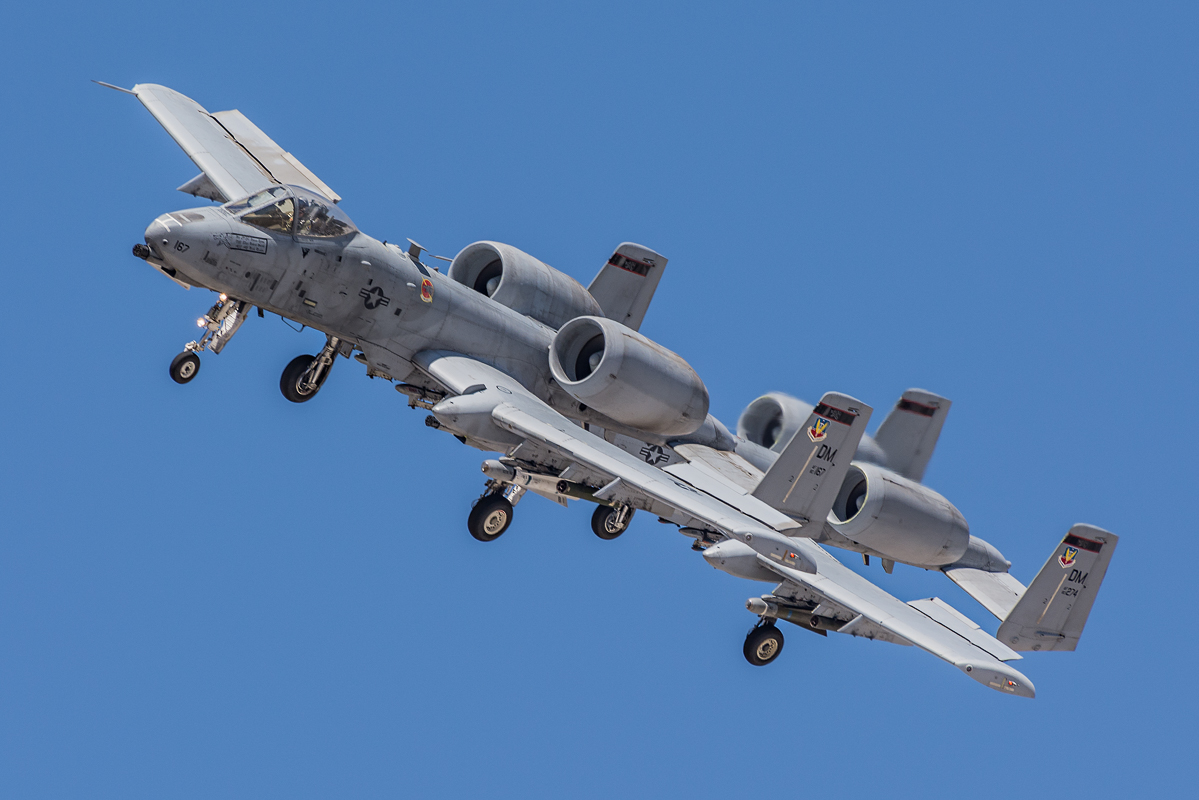 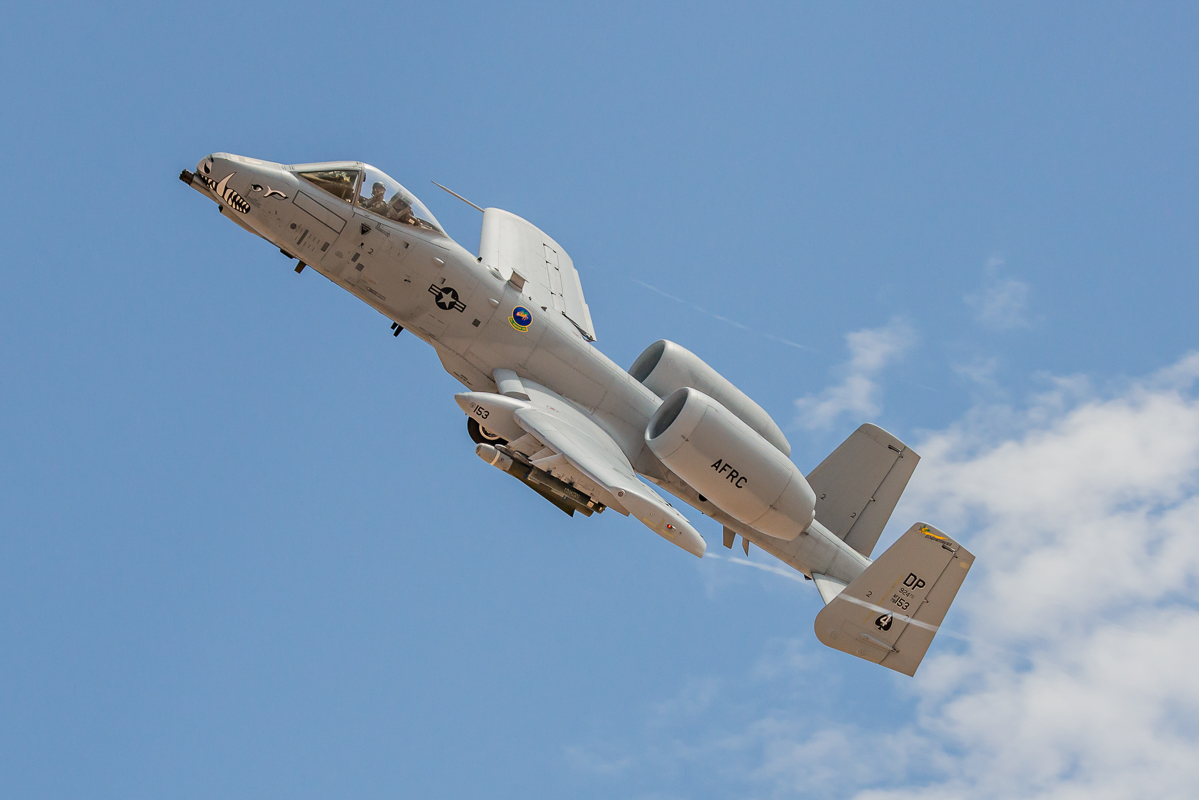 An A-10 from the 47th FS “Dogpatchers,” winners of Hawgsmoke 2014, completes a strafing run at the BMGR