If one were to listen to the hyperbole about the Fairchild Republic A-10 Thunderbolt II, also known as the “Warthog”, one would hear rhetorical terms such as “slow-flying”, “cold war era” and “decades-old” to describe the A-10. In the wide-world of political spin, these terms can easily be burnt into the memory cells of those that may not know, or understand, the capabilities of the A-10. When looking at the facts, we realize that the A-10 Warthog is very good at what it was designed to do, that is: to provide Close-Air Support (CAS) to ground troops. In this role, there is no better aircraft in the world. This has been supported by many ground troops that have fought for, and with, the United States during several conflicts. U.S. Army Chief of Staff, General Raymond T. Odierno, has stated on several occasions that the A-10 is: “the best close air support aircraft” in the world. Based on feedback from Iraqi POW’s during the first Gulf War, the A-10, along with the B-52, were the aircraft feared the most by the Iraqi soldiers. The A-10 has been credited with destroying over 4,000 military vehicles and artillery pieces in the first Gulf War. There is no doubt that the A-10 has saved thousands of lives along with being a deterrent against further aggression. 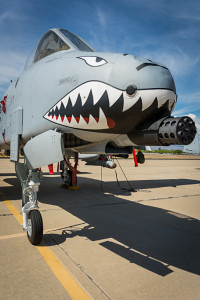 The Fairchild Republic A-10 Thunderbolt II is an aircraft built around a large powerful gun. Built around a General Dynamics GAU-8/A Avenger 30mm cannon, the A-10 is capable of holding 1,350 rounds of ammunition with a firing rate of 3,900 rounds a minute. In addition, the A-10 has eleven “hardpoints”, or pylons, capable of carrying additional armament (up to 16,000 pounds), which could include: 500 pound Mk-82 and 2,000 pounds Mk-84 series low/high drag bombs, incendiary cluster bombs, combined effects munitions, mine dispensing munitions, AGM-65 Maverick missiles and laser-guided/electro-optically guided bombs; infrared countermeasure flares; electronic countermeasure chaff; jammer pods; 2.75-inch rockets; illumination flares and AIM-9 Sidewinder missiles. Based on a 2013 article in National Defense, Rebecca Grant, director of the Washington Security Forum, stated that an A-10 “can take out about 14 vehicles and other targets per mission”. This includes tanks and other adversary vehicles.

The first production A-10A was delivered to Davis-Monthan Air Force Base, Arizona, in October 1975. The A-10 is powered by two non-afterburning GE TF34-GE-100 turbofan engines in which each can supply 9,065lbs. of thrust. The location of the engines, high on the fuselage, protects the engines from ground fire while allowing the pilot to fly the aircraft fairly easily if one engine fails. The single-seat cockpit is protected by a “tub” of titanium armor capable of withstanding small arms fire and strikes from a 23mm canon. The bubble canopy is bulletproof and provides a wide field of view for the pilot. When hydraulic systems are lost, pilots can use manual controls to insure the pilot and aircraft can be brought back safely. The A-10 is known for its ruggedness. There have been many stories of A-10’s being nearly destroyed in battle only to deliver the pilot home safely. One such incident, which happened in 2003, involved then-Captain Kim Campbell. The A-10 she was flying was severely damaged over Bagdad and lost all hydraulic systems. Captain Kim Campbell managed to revert to manual operation and land the aircraft safely in Kuwait.

The USAF Hawgsmoke competition officially began in 2000 and took place at the Alpena Combat Readiness Training Center in Michigan. Hawgsmoke’s roots began with the USAF’s air-to-ground gunnery and bombing competition entitled “Gunsmoke”. Gunsmoke originally began in 1949 and was held at Nellis AFB in Nevada from 1954 to 1995. This year’s Hawgsmoke took place July 9-12, 2014 and was the 8th competition which has been held biennially since 2000. Picking up where Gunsmoke left off, Hawgsmoke is a worldwide A-10 bombing, missile, and tactical gunnery competition designed to draw on the A-10’s Close-Air Support (CAS) capabilities. According to the Davis-Monthan Air Force Base Press Release, Hawgsmoke 2014 featured 14 teams from around the world and focused on A-10 tactics such as moving target strafe techniques, GPS-out navigation, and degraded weapons delivery.

Hawgsmoke 2014 was hosted by the 357th Fighter Squadron (357th FS) “Dragons” at Davis-Monthan Air Force Base in Arizona. This year’s competition featured a combination of tactical and range events designed to exploit the strengths of the A-10. Competing in these events was difficult enough for the A-10 pilots, but the Rules of Engagement (ROE) took the competition to another level by requiring degraded avionics and specifying limits on the number of rounds used per strike. For example, for the range events, a limit of 81 rounds per pass was outlined in the ROE. To better appreciate the degree of difficulty here, an A-10 will shoot approximately 65 rounds per second, so bursts had to be limited to 1.25 seconds per pass. In any case, 81 rounds is enough to obliterate any target.

Range events took place at the Barry M. Goldwater Range (BMGR) in southwestern Arizona. With 2.7 million acres of land, 57,000 cubic miles of airspace and great year-round weather, the BMGR is an ideal location to conduct a 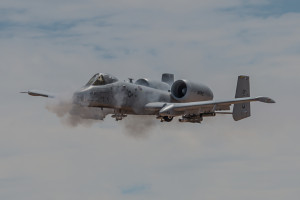 For Hawgsmoke 2014, there were three categories for teams to place in with one overall winner. This year’s overall winner was the 47th Fighter Squadron (47 FS) “Dogpatchers” who call Davis-Monthan AFB in Tucson, Arizona home.

Overall, Hawgsmoke 2014 was a great competition showcasing the capabilities of an incredible aircraft. The battle tested A-10 has proven the test of time. Competitions such as Hawgsmoke help pilots draw on their training and experience while building camaraderie with their unit and the other units competing. With this year’s competition won by the 47th FS at Davis-Monthan AFB, it looks like the 2016 Hawgsmoke competition will be held again at Davis-Monthan AFB.

While the politicians continue to search for their “one-size fits and does-all aircraft”, the A-10 quietly continues to do what it does best, provide Close-Air Support (CAS) for the men and women that fight for our country. Until there is a capable replacement, I would leave the protection of our troops to the time-tested and proven Fairchild Republic A-10 Thunderbolt II and the pilots that fly it.

I would like to thank the 355th Fighter Wing Public Affairs office for their hospitality during this event. A special thanks goes to 2nd Lt. Erin Ranaweera and SSGT Angela Ruiz for organizing the media events related to Hawgsmoke and braving the hot Arizona summer heat to accommodate us.