The phrase “April showers bring May flowers” seems to apply to most of North America in April…with the exception of Southern Arizona. Temperatures in the Phoenix area in April are typically 80-85 degrees with little-to-no rain. Some would say this is perfect weather for flying…which makes it perfect weather for an air show.

Luke AFB, named after World War I flying ace Lieutenant Frank Luke Jr., the first aviator to be awarded the Medal of Honor, is located west of Phoenix in the western sector of the Valley of the Sun.

The base opened in 1941 and is now home to the United States Air Force’s 56th Fighter Wing, the largest fighter wing in the world. Taking advantage of the area’s great weather and expansive nearby gunnery ranges, Luke AFB is famous for training some of the best fighter pilots in the world.

For the past few decades, Luke AFB has been training fighter pilots in the F-16 Fighting Falcon. According to a Luke AFB fact sheet, Luke AFB trains more than 50 percent of the Air Force’s fighter pilots and 90 percent of its F-16 pilots. In addition, F-16 Crew Chiefs are also trained at Luke.

The new kid on the block for Luke AFB is the Lockheed Martin F-35A Lightning II Joint Strike Fighter. In March 2015, the 56th FW at Luke AFB formally took on the responsibility of training fighter pilots to fly the F-35. This responsibility includes pilots from the U.S. along with F-35 partner and foreign military sales (FMS) nations. Currently, pilots from Australia, Norway and Italy are training alongside pilots from the USAF. In addition, over the next few years the 56th FW will begin to train pilots from Turkey, Denmark and the Netherlands and FMS countries Japan, Korea and Israel. By 2024, Luke is scheduled to have six fighter squadrons and 144 F-35s.

Luke AFB presents its biennial air shows in an effort to give back to the community which has been very supportive of the base throughout the years. As Brig. Gen. Scott Pleus, 56th Fighter Wing commander, explained in a USAF interview: “All year long we get unending support from our elected leaders, businesses and those who live throughout the Valley…and once every two years we get the opportunity to give something back in the form of an air show. It is our way of saying ‘thanks’ for allowing us to be a part of this great community.”

The headliner for “75 Years of Airpower” was the USAF Air Demonstration Squadron “Thunderbirds,” but attendees also got to see the first official public appearance of the F-35 Heritage Flight Demo Team. While “unofficially”, Luke’s 2014 air show featured an informal pairing of the F-35 Lightning II with the original Lightning, the P-38, for a few passes, 2016 marks the first year for the F-35 Heritage Flight Demo Team on the air show circuit. The pilot for the team is Luke AFB’s own Maj Will “D-Rail” Andreotta.

Some of the best “demos” at air shows are the house demos featuring the specialty of the base. Since Luke AFB has been “Viper Country” for several decades, it seems fitting that an F-16 close air support (CAS) demo would be a highlight of the show. Entitled the “CAS Capability Display,” the demo featured four F-16’s acting in a CAS role including audible radio transmissions along with some pyrotechnics.

Another military demonstration team that performed a few times during the show was the U.S. Army Golden Knights demonstration parachute team. Starting at 12,500 feet, the team impressed crowds with their precision jumps. 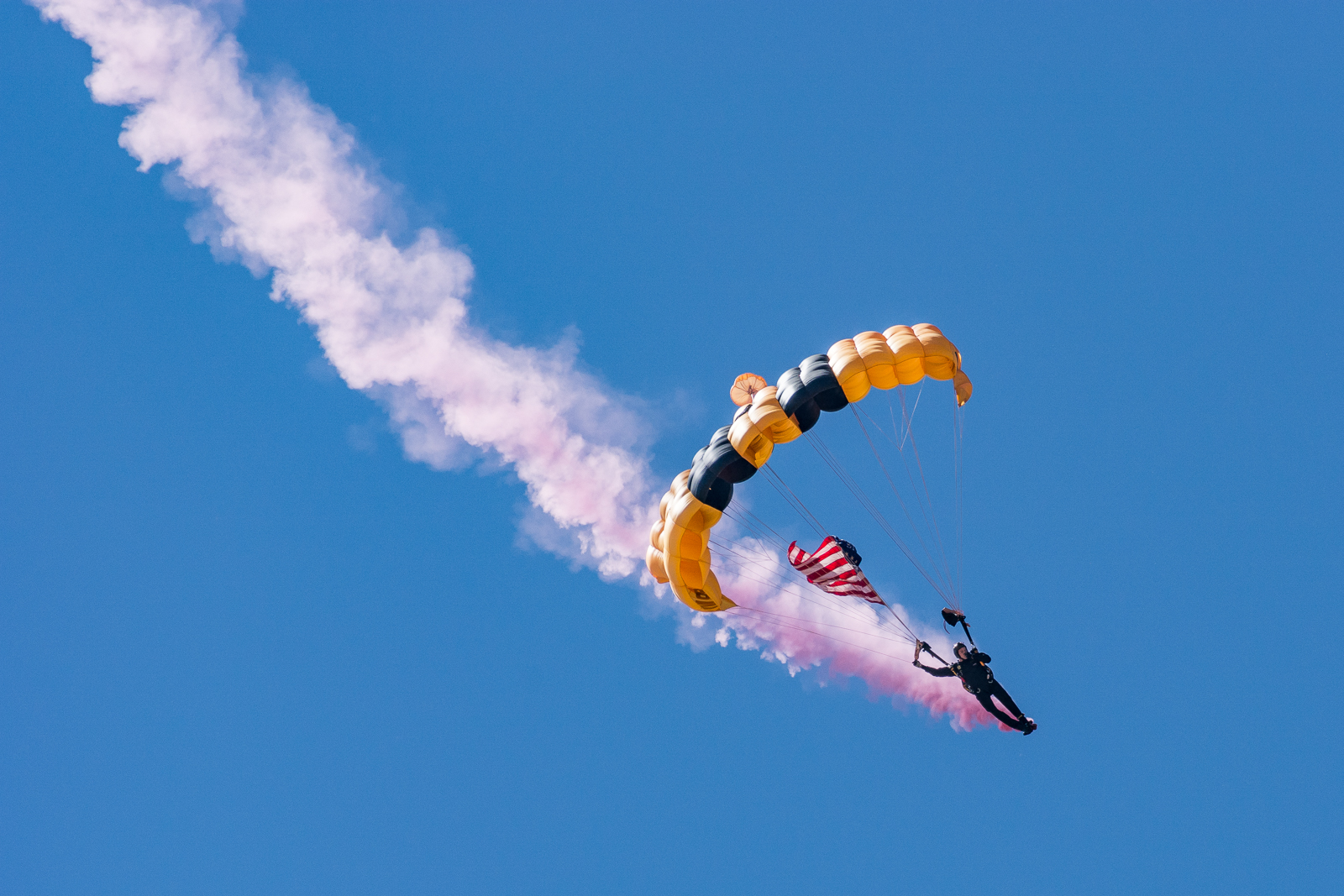 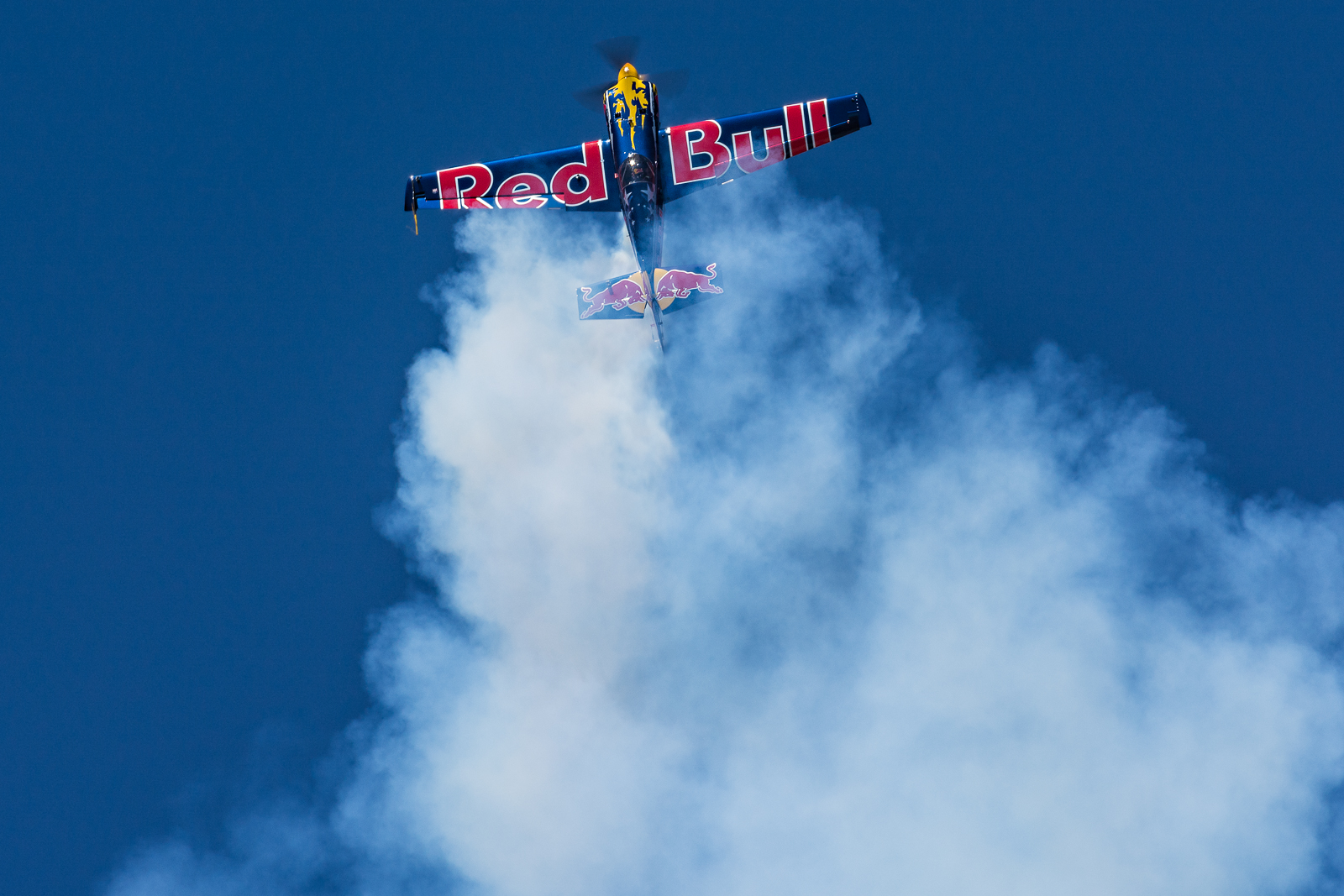 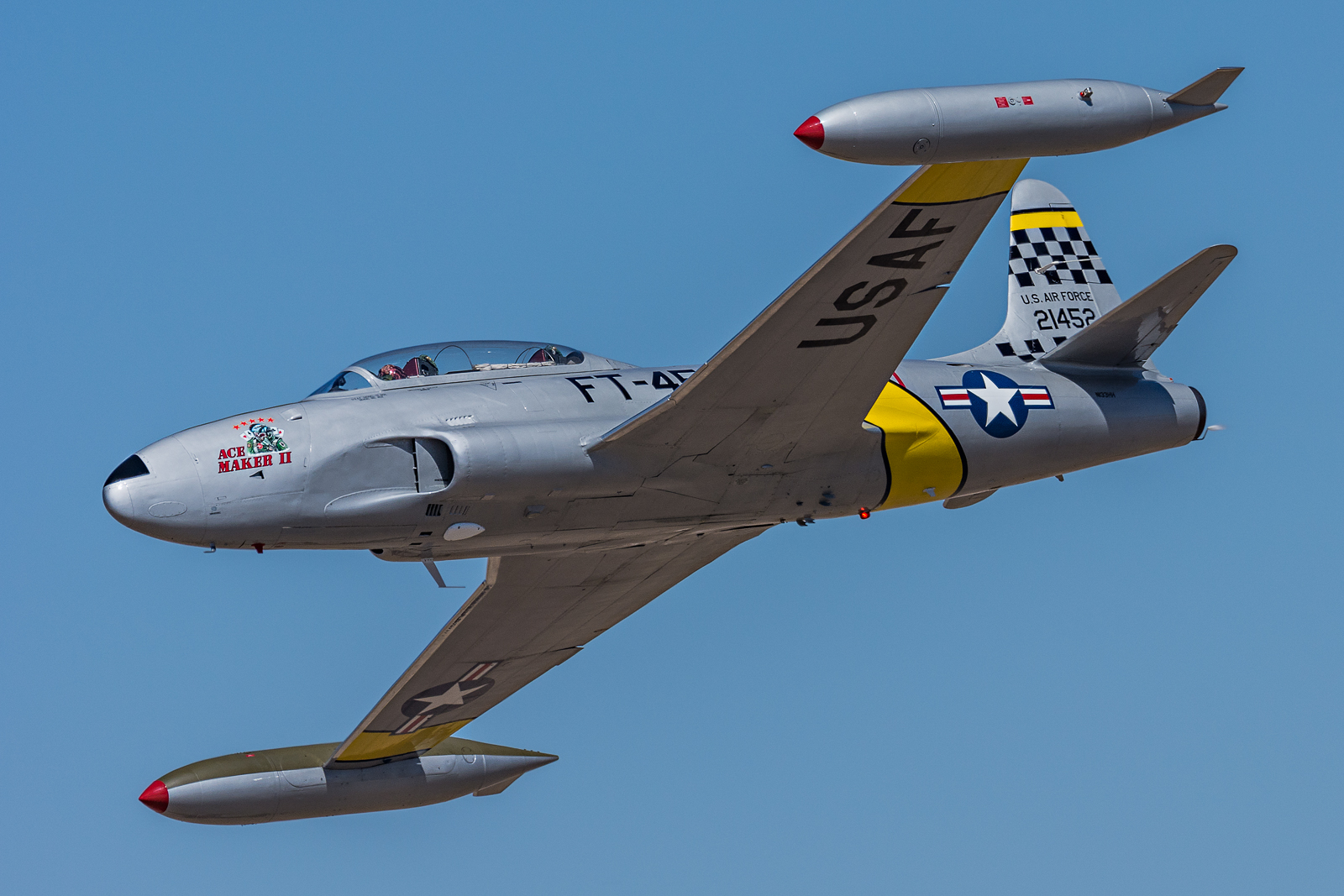 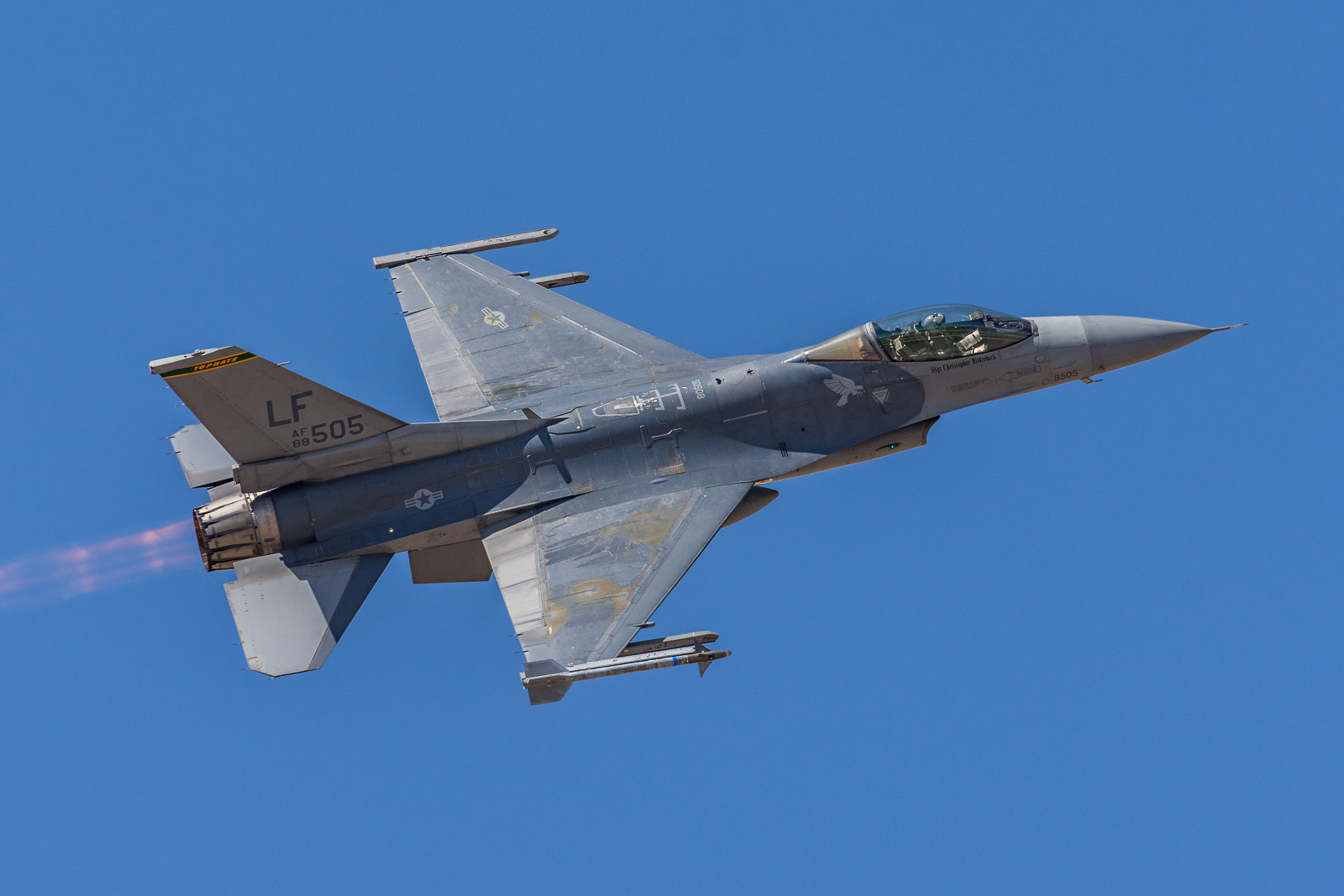 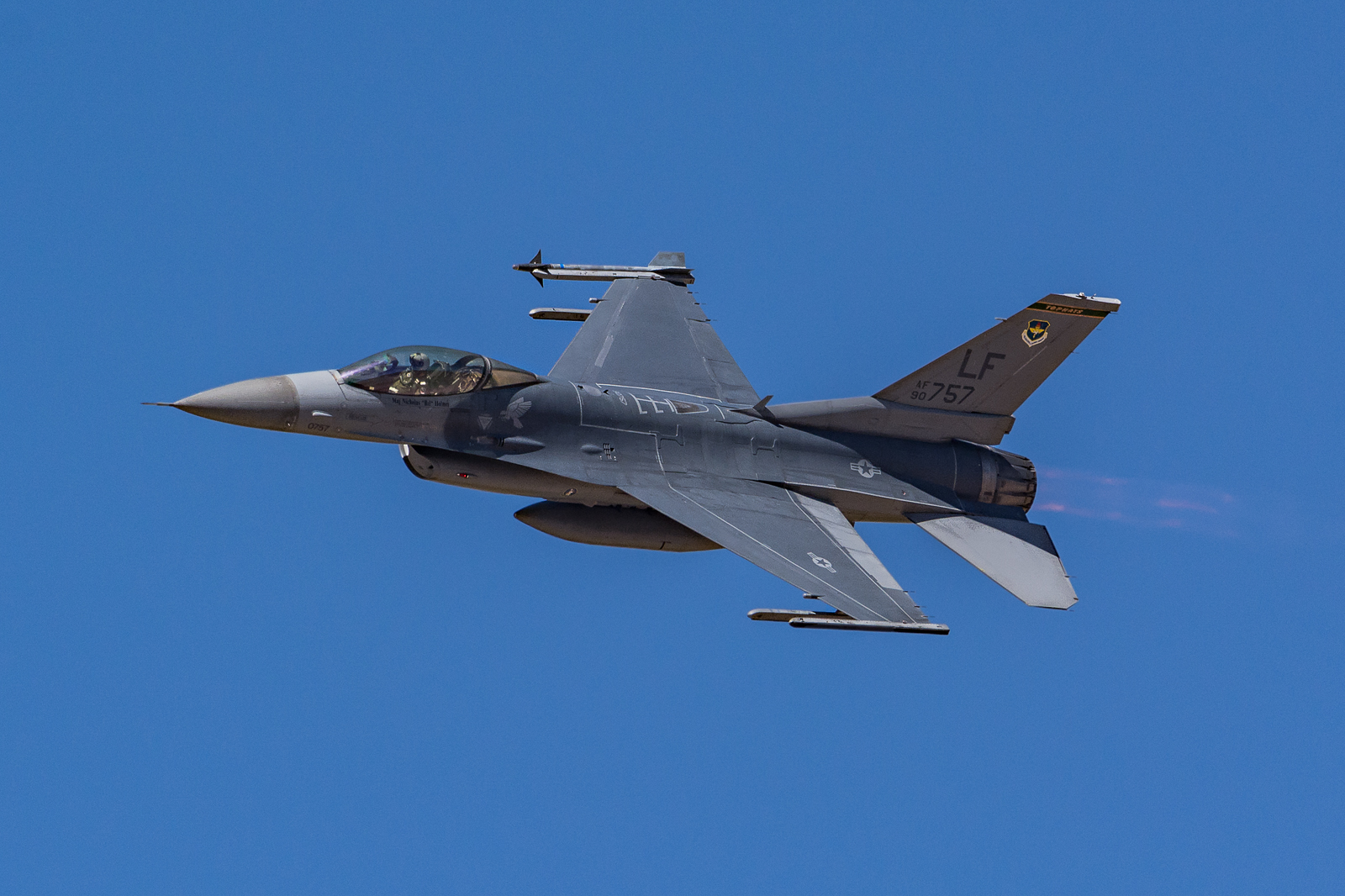 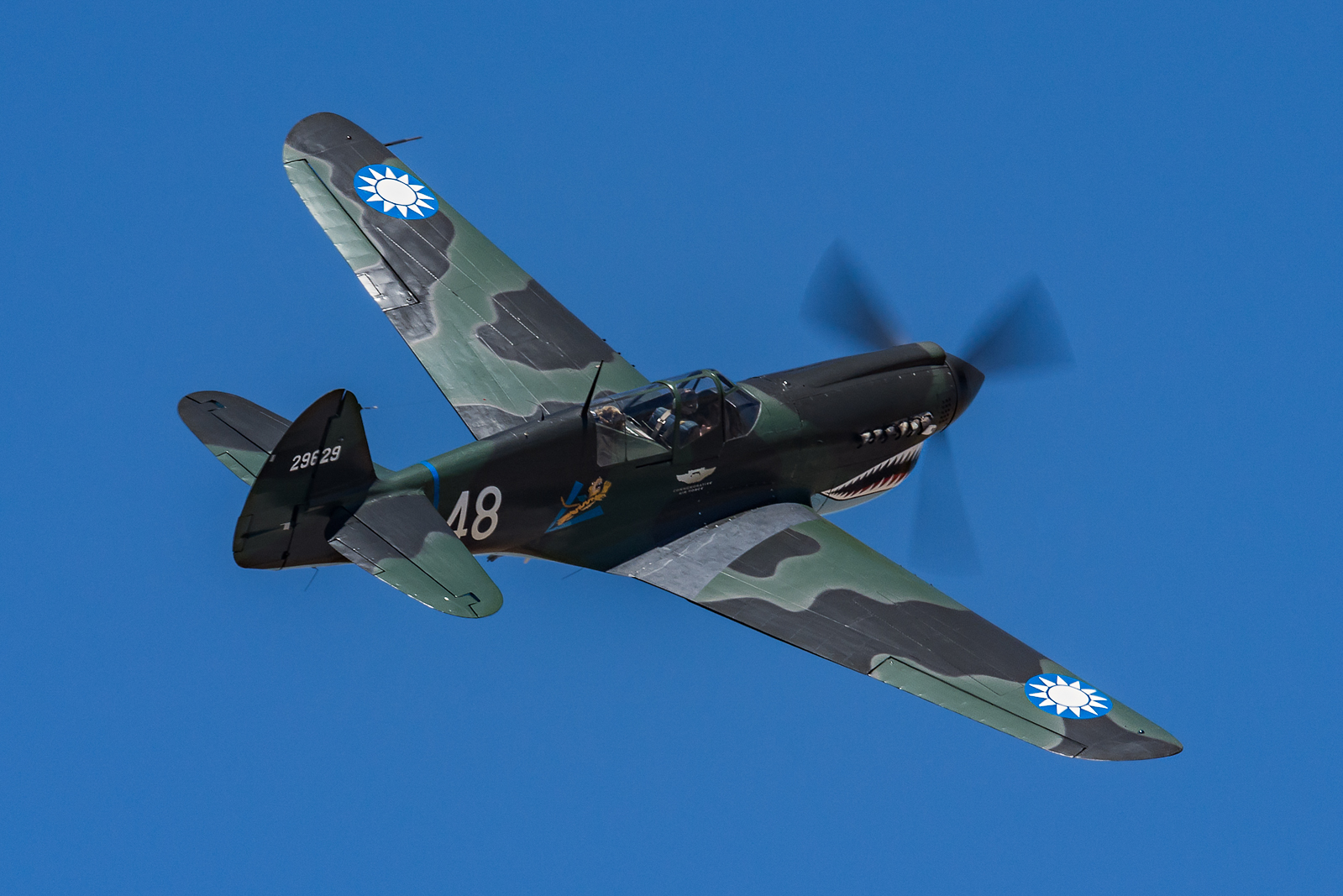 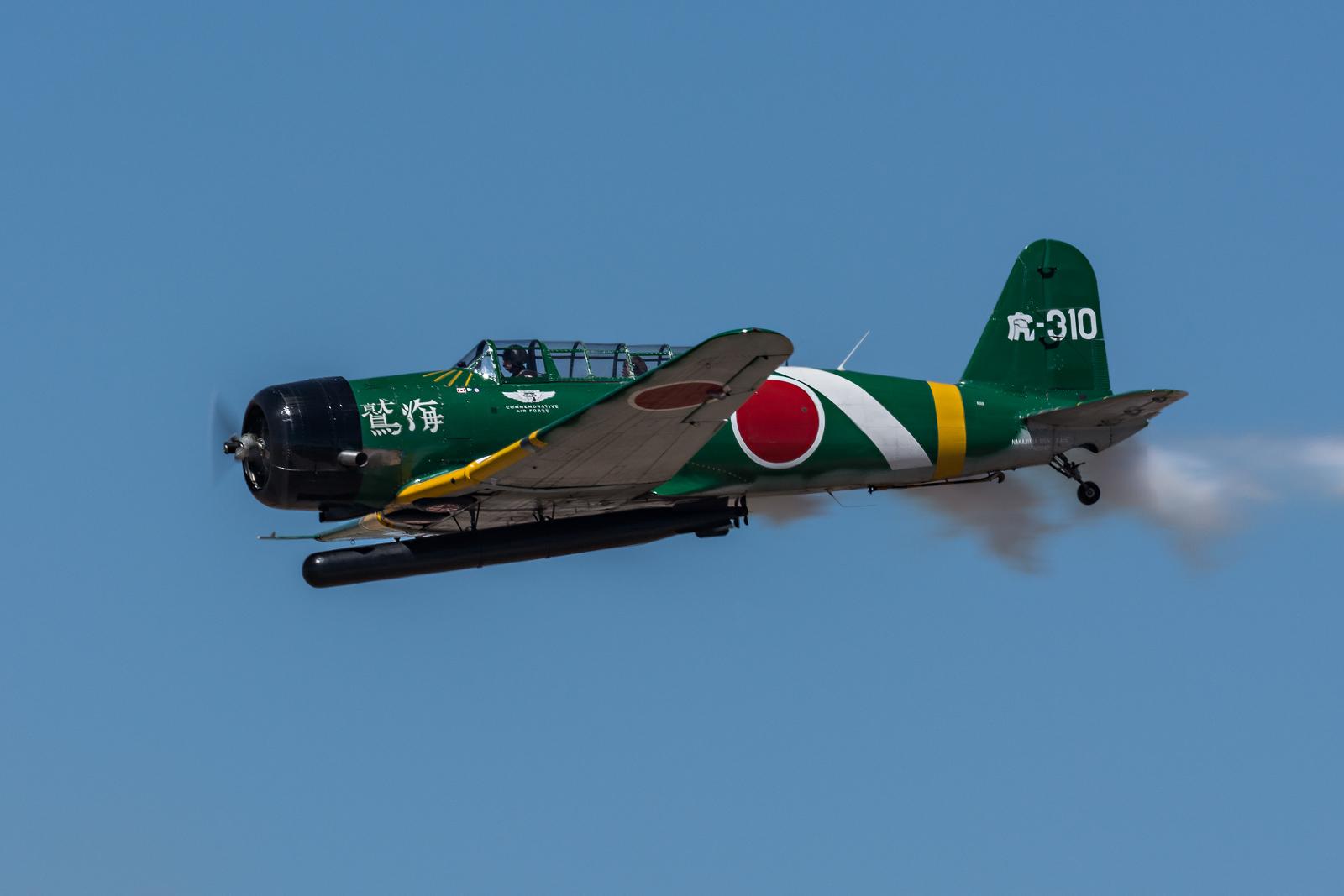 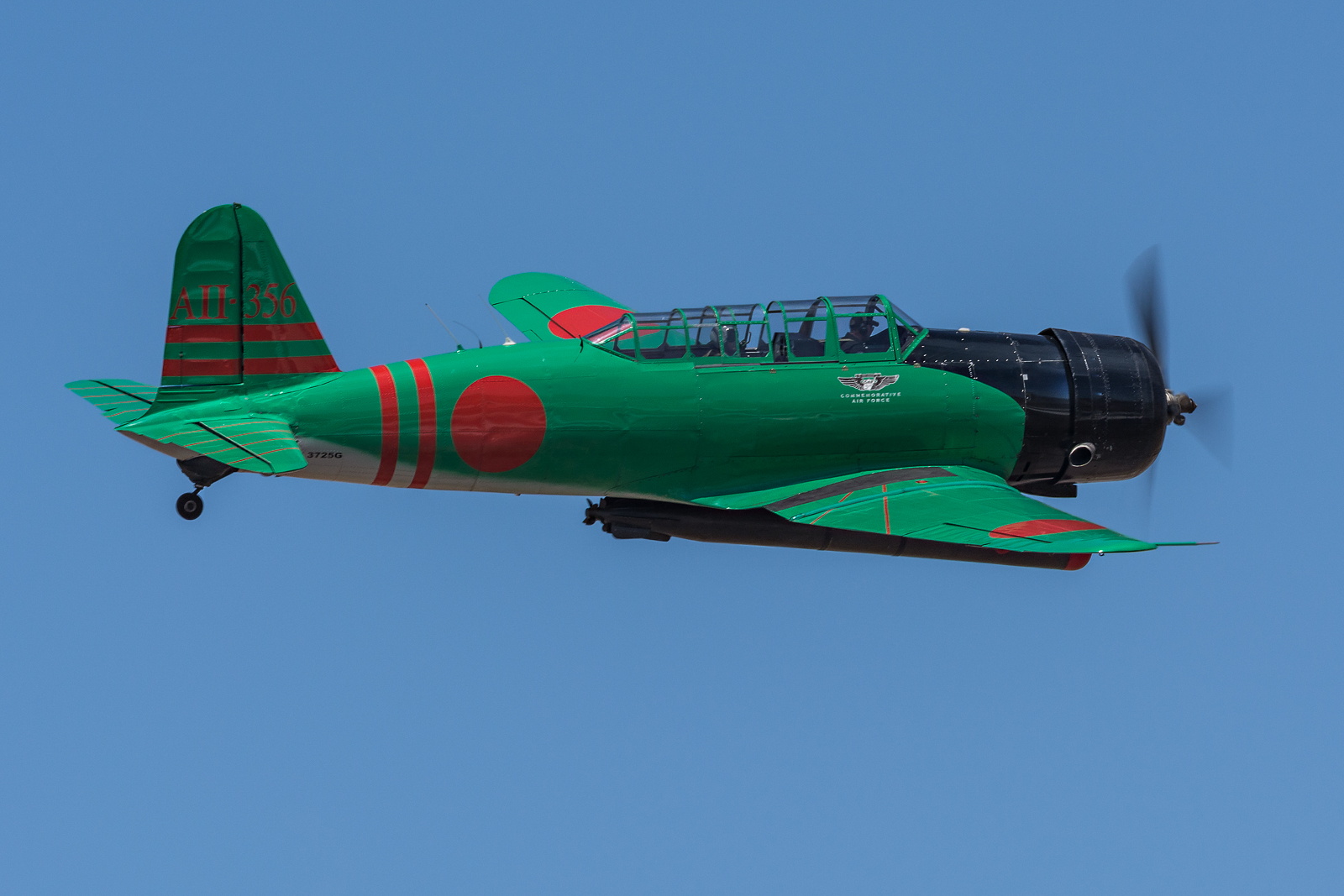 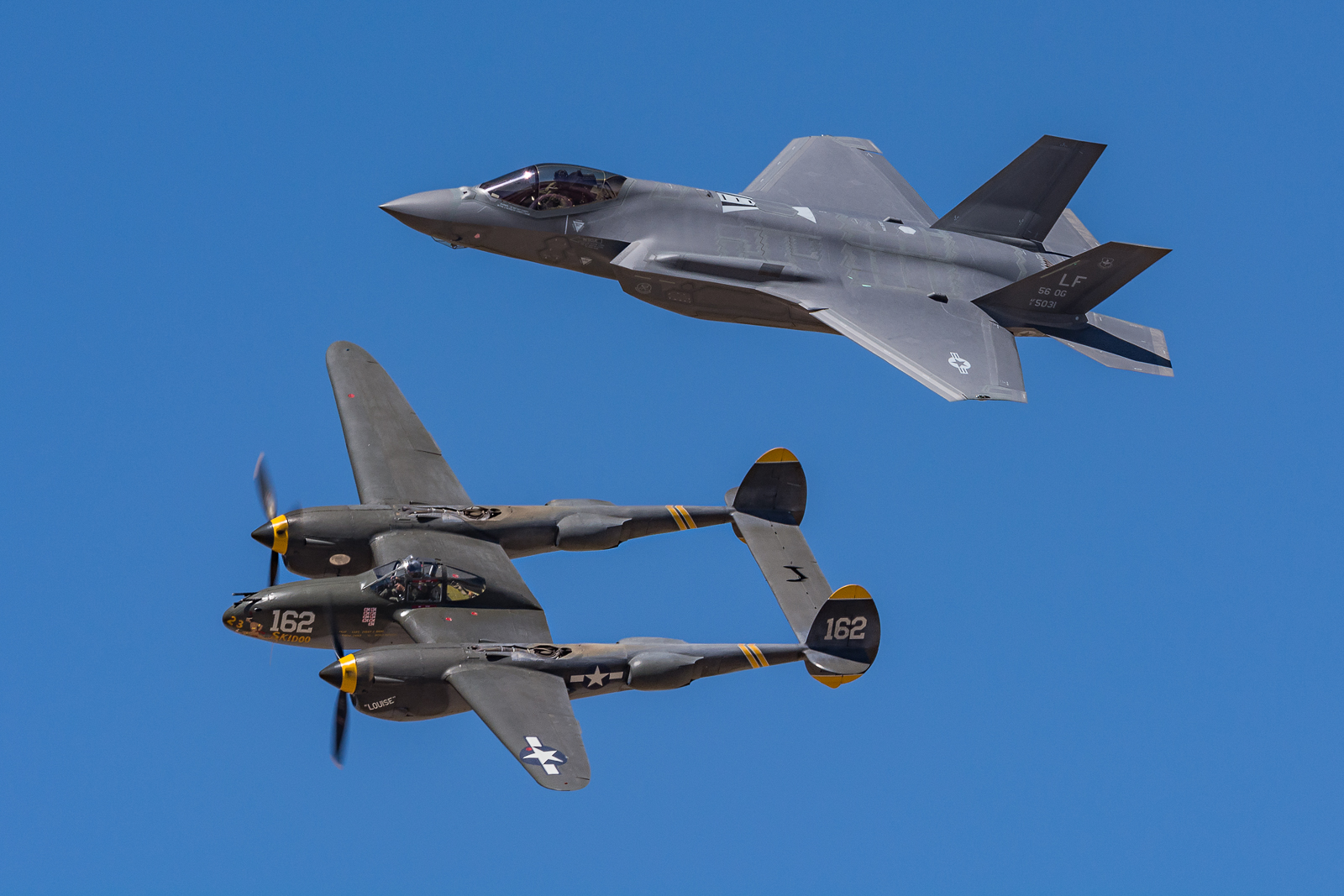 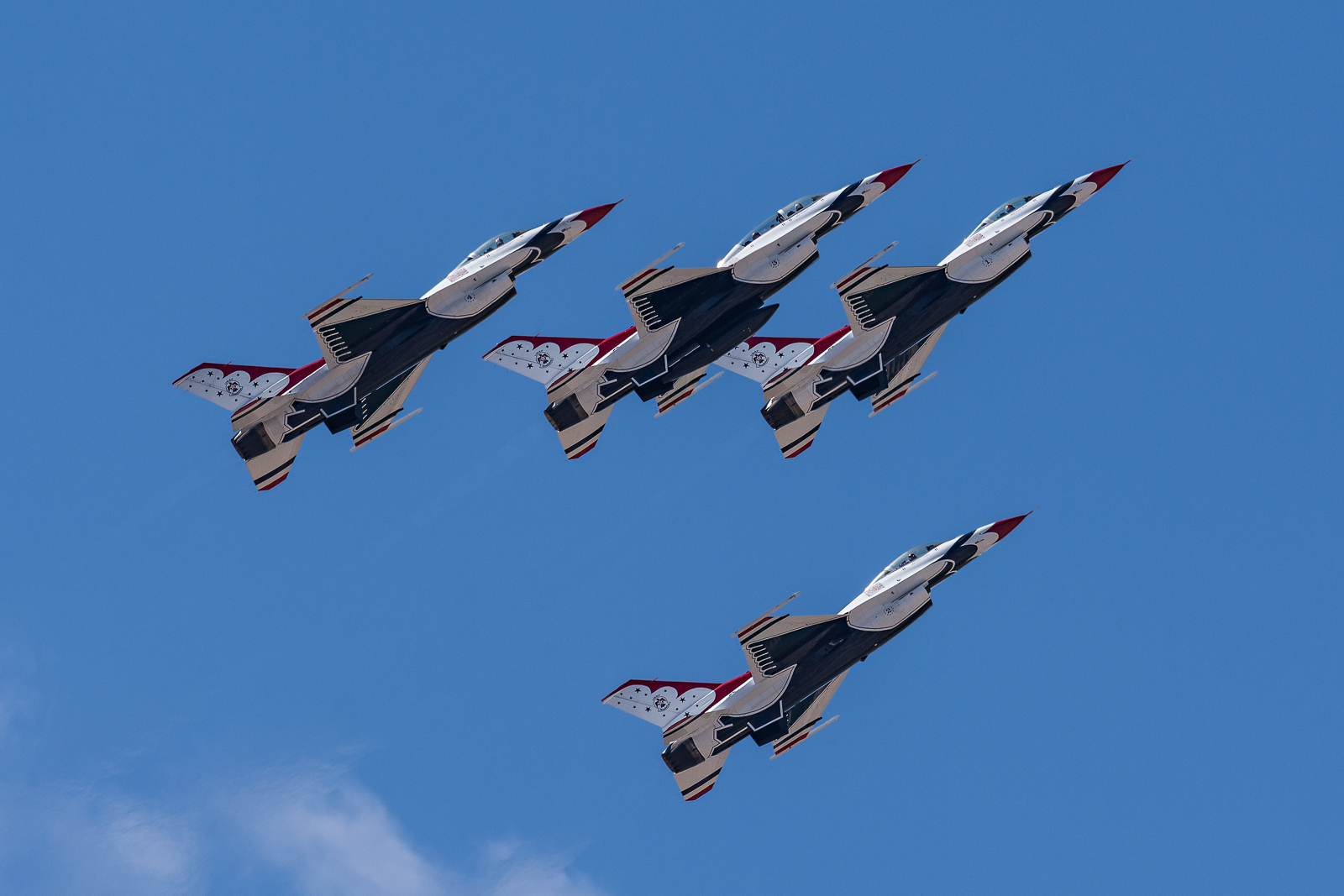 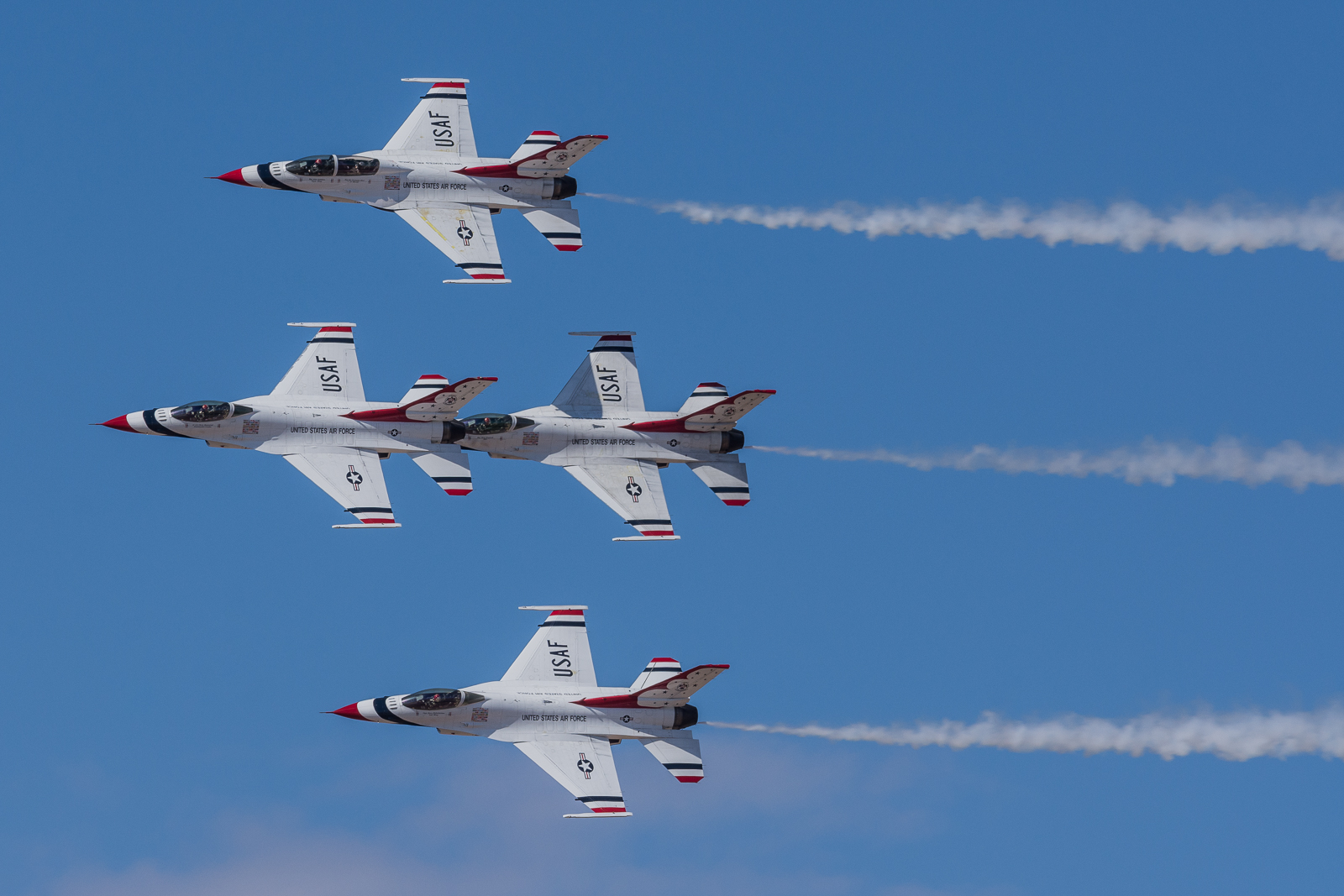