As the sun sets on the USMC’s Weapons and Tactics Instructor (WTI) Course 1-15, another group of graduates completes the extensive seven-week program. WTI is held twice a year, is delivered by Marine Aviation and Weapons Tactics Squadron One (MAWTS-1), and has been hosted by Marine Corps Air Station Yuma in Yuma, Arizona. During the seven week training, students learn to master the components and aspects of the Marine Air Ground Task Force (MAGTF). Like many military exercises, the key lesson throughout WTI is integration. USMC aviators plan and implement integrated strategies utilizing a variety of USMC assets. This provides a realistic look and experience at how real-world scenarios unfold. Ultimately, graduates are more prepared for future operations. 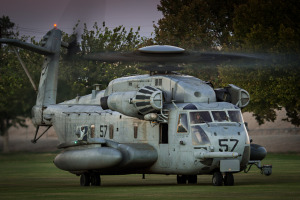 A USMC Sikorsky CH-53E Super Stallion rests in a local Yuma park as part of a Humanitarian Assistance/Disaster Relief exercise.

The training is the combination of a curriculum focused on the six major functions of USMC Aviation: offensive air support, anti-air warfare, assault support, aerial reconnaissance, electronic warfare, and control of missiles and aircraft. This type of training is invaluable, especially if a particular unit is preparing for deployment. The ability to be able to integrate and rely on the strength of a variety of USMC assets in a MAGTF is preparing the Marines involved for real-world combat. WTI is not limited to aviators. Ground units, maintainers, support units, and more take part in the experience.

MCAS Yuma is the ideal host for WTI. With 313 total days with sun per year and being a close proximity to a variety of ranges and open desert, MCAS Yuma is the ideal facility for year-round USMC aviation training. With welcoming residents, a nice selection of hotels, and many restaurants, Yuma has shown it can support MCAS Yuma and WTI.

Fifteen-hour days are commonplace during WTI. The first, approximate, two-and-a-half weeks consists of classroom time, while the final three-and-a-half weeks involves executing the strategies and principals taught in the classroom. Week seven includes comprehensive missions in the form of FINEX 1 (Tuesday), FINEX 2 (Thursday), and FINEX 3 (Saturday). 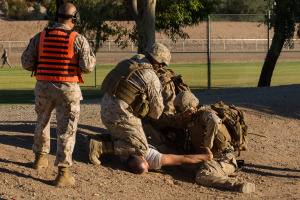 In order to accommodate the thousands of Marines required to support training of this magnitude, the support of the local community is needed. The community of Yuma, Arizona has been very supportive of WTI throughout the years. In an

effort to give back to the community, the USMC, as part of WTI, holds a Humanitarian Assistance/Disaster Relief (HA/DR) exercise in a local park. Here, residents, aviation enthusiasts, and aviation photographers can see the key elements of HA/DR effort in action. Marines patrol the delivery areas as hostile citizens (local volunteers) attempt to demand immediate assistance and “break through” numerous barricades. Deliveries are made via large Sikorsky CH-53E Super Stallions (commonly referred to as “The Hurricane Maker”) with support provided by Bell UH-1Y Venom’s.

WTI is an integral part of preparing Marines for real-world combat scenarios that require integration from a multiple variety of USMC assets. With the primary role of supporting the ground troops, USMC aviators who graduate from the WTI program are better prepared for deployment and, potential, real-world combat. Since 1978, WTI has been the premier combat readiness program for the USMC. From an aviation enthusiast/photographer perspective, WTI is a time to see a nice variety of USMC aircraft with a steady volume of traffic. The exercise in the local Yuma park is a great opportunity to see a humanitarian effort in action with the Marines, aircraft, and hardware that make it happen. WTI 2-15 is scheduled to begin the classroom portion of training in March 2015.