Warthogs getting dirty in the Upper Mid-West!

WARTHOGS GETTING DIRTY IN THE UPPER MID-WEST.

The temporary landing zone is one of several progressive training scenarios held this week under the Michigan Air National Guard’s exercise Northern Agility 22-1 in Michigan’s Upper Peninsula. This is the first time that ICTs, which enable the quick rearming and refueling of a running jet, have ever been conducted on a public highway in the U.S.

Northern Agility 22-1 demonstrates the U.S. Air Force’s Agile Combat Employment doctrine, which is about being ready to execute missions quickly in unpredictable ways and operating from austere airfields. The landing zone was named “Hawk LZ” in honor of F-16 pilot Maj. Durwood “Hawk” Jones from the Wisconsin ANG’s 115th Fighter Wing, who lost his life in a training accident in Michigan in 2020.

“Northern Agility 22-1 is an historic exercise that supports the Air Force’s directive to ‘accelerate change or lose,’ as well as the ability of our Airmen to generate combat power anytime, anywhere.” said Brig. Gen. Bryan Teff, assistant adjutant general and commander of the Michigan Air National Guard.

“Michigan is a champion for Agile Combat Employment, so when it comes to leveraging our state’s unique partnerships, training environment and resources to ensure the Joint Force stays one step ahead of our adversaries, today was a huge success.”

Staging and additional training activities for contested logistics, sustainment, and multi-capable Airmen concepts are being held this week at other locations in Alger County including Sawyer International Airport and Hanley Field, Alger County’s local airport.

An A-10 Thunderbolt II from the Michigan Air National Guard, takes off from a highway near Alpena, Michigan.- David Kujawa

Additionally, an MQ-9 Reaper from the North Dakota ANG’s 119th Wing, Fargo ANG Base, crewed by Airmen from the Michigan ANG’s 110th Wing, Battle Creek ANG Base was also involved.

“Northern Agility 22-1 would not be possible without the long-term partnerships that exist between the Michigan National Guard and the Michigan State Police, Michigan Dept. of Transportation, Alger County Sheriff’s Office, and of course, support from our neighbors in the Upper Peninsula,” said Lt. Col. Brian Wyrzykowski, lead operations planner for Northern Agility 22-1.

“We see exercises like this as an investment in the U.P. that are critical to the state’s future economic success. Beyond that, this is an extraordinary training opportunity for our Airmen delivered by the unwavering support of patriotic Michiganders.”

“Agile Rage 22 brought together multiple ANG capabilities from across the nation to test the performance of their Multi-Capable Airmen in a highly contested environment,” said Major. Garett Ruby, Agile Rage 22 exercise director. “Through Agile Rage 22, the ANG is developing and validating tactics, techniques and procedures for the future war fight, including distributed and austere air-to-ground strike capabilities for large-scale combat operations.”

The A-10 Thunderbolt II Pilots received Unprepared Surface Landing (USL) certification and Controllers on the ground  from the 260th Air Traffic Control Squadron having received certification by gaining currency in operating from austere environments with training being conducted at the Young Landing Zone at Fort McCoy, Wisconsin.

“Agile Rage is one of the first exercises that we’ve done where we’re executing the Agile Combat Employment mission,” said Major. Michael Gillis, officer in charge of the 124th Maintenance Squadron. “We’re going to be operating out of the CRTC and sending aircraft from here down to Volk Field, Wisconsin, and back.”

Northern Michigan’s National All-Domain Warfighting Center was selected as the site for Agile Rage ’22 because of its unique training airspace and facilities (Alpena Combat Readiness Training Center and Camp Grayling Joint Maneuver Training Center). The NADWC encompasses more than 148,000 acres of ground maneuver training area and more than 17,000 square miles of special use airspace, one of the largest areas of its kind in the U.S.

As the war in Ukraine has highlighted the first targets that were selected by Russian forces of strategic importance to nullify was to destroy or capture airfields Ukrainian aircraft could operate from, its obvious that the forward thinking UkAF have countered on this tactics and adjusted and have thus moved aircraft around to keep the Russians second guessing where the UkAF aircraft are operating from. 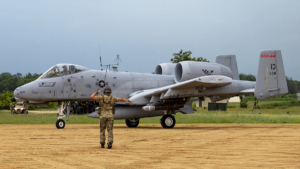 As such nations are getting a reminder in the use of austere field environments to base aircraft operations during combat operations. The purpose of this mission in Agile Rage is to increase unit ACE readiness, which is a proactive and reactive operational scheme of manoeuvre to increase survivability while generating combat power.

This new paradigm depends heavily on training Airmen to be multi-capable who can operate in austere locations and respond quickly and create opportunities for ANG assets to integrate with joint assets in a full-spectrum, combat environment.

“The primary goal here is training – training for that next fight,” said Gillis. “The fight we’ve been in for the last 20 years could be completely different from our next fight, so this training gives us a glimpse into how we could operate in that new environment.” 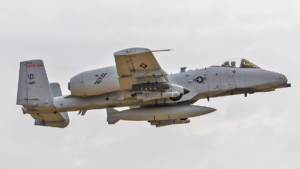 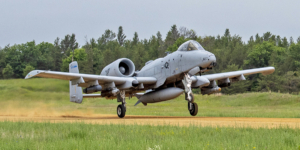