Flying Dragons over the Australian Outback.

“Our combined capability to coordinate ground forces demonstrates adaptability and interoperability that can be applied to disaster relief or warfighting operations.”

“MRF-D is excited to continue the outstanding tradition of Southern Jackaroo alongside our trusted Australian and Japanese allies,” Colonel Steele said.

“We are looking forward to enhancing our combined interoperability and developing our relationships.”

Southern Jackaroo featured around 400 soldiers from the various branches of the Australian Defence Force (ADF), 190 from the MRF-D and 70 from the JGSDF. 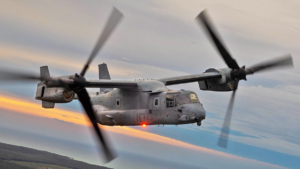 Apart of Southern Jackaroo was MRF-D Air Combat Element led by VMM-268 (Reinforced) ‘Red Dragons’ MV-22 Osprey’s along with VMGR-152 ‘Sumos’  KC-130J Hercules conducting a long range Causality Evacuation (CASEVAC) departing RAAF Base Darwin in Northern Territory for the Shoalwater Bay Training Area (SWBTA) near Rockhampton in the state of Queensland, with a time of 12 hours total being in the air and a total distance of just 5,100 kilometres (2,750 Nautical Miles) being flown.

Thwo KC-130J’s and two MV-22 Osprey’s were used for the mission leaving Darwin and arriving at RAAF Base Townsville and then departing to the SWBTA for the Osprey’s to land in the range at a pre established Landing Zone and pick up the patients with simulated injuries that were treated inflight back to RAAF Base Darwin.

The mass casualty scenario was intended to test Marines and Navy Corpsman’s combat-life-saving skills in treating and stabilising casualties before transporting them to a higher echelon of care back at base.

APD spoke to U.S. Marine Corps Captain Avery Crisp apart of the VMM-268(R) “Red Dragons” and lead planner for the cross country CASEVAC flight, She provides details on what the flight was designed to achieve for the team she lead and how this helps the Squadrons training during the 6 month deployment to Australia from Hawaii.

With any long flights apart of an exercise a lot of pre-planning goes into a scenario like CASEVAC, Captain Crisp explains what her team had to do to meet objectives set by exercise planners and plan for the unexpected.

“Typically the timeline for planning and execution are shortened with a CASEVAC because we cannot specify the exact time required for a flight. However, due to the distance and intricacies of this mission, the planning
was deliberate and began several weeks ago.

Multiple routes were analysed for best time and fuel burn for both the MV-22s and the KC-130Js, to include
the en route air-to-air refueling required to complete the mission. On top of that, winds, emergency diverts, En-Route Care Team (ERCT) requirements and aircrew fatigue were all analysed to ensure the mission was safe and
successful. 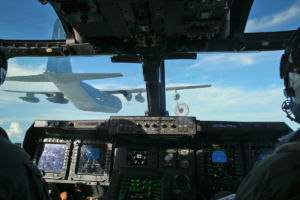 The ERCT had specific requirements, including the use of stanchions and a litter for patient transport and the use of specific medical equipment approved for flight in an MV-22. These requirements were all calculated as extra weight which was factored in to fuel burn to ensure time and fuel numbers were appropriately accounted for.”

This training scenario for VMM-268 personnel and the distances covered in this mission is an invaluable experience for all involved, as not many long distance flying training missions are routinely scheduled for the Squadron when they are back home based out of Kaneohe Bay in Hawaii, and thus allows the Squadron to fully implement a whole range of tactics.

“Most of our day-to-day training in Hawaii remains in the island chain so long-range training opportunities aren’t routine, those opportunities at home provide a unique dimension in the fact that we must manoeuvre in smaller areas, That requirement changes our operating procedures but does not necessarily detract from the training as
some may think,” stated Captain Crisp.

“When operating in Australia and the vast space it provides, we are able to train to a larger battle-space, this means increased time in the aircraft for pilots and aircrew, deliberate fuel planning, and additional range/airspace considerations.

Even though in Hawaii we are training in a small area, over the last year the squadron has taken measured steps in our training plan to fly longer sorties by conducting Trans-Pacific flights (usually supported by KC-130J’s or supported by U.S. Air Force tankers such as the KC-10A Extender). This allows the pilots to conduct in-depth planning and for all aircrew involved to get used to flying extended distances.”

Southern Jackaroo was an opportunity for the squadron to increase this long distance training plan by adding in additional aerial refuelling capabilities provided by VMGR-152 which is a valuable tool utilised for CASEVAC missions to be undertaken quickly and increasing the overall distance flown by MV-22’s in providing that airlift.

“These long-range flights will continue to be a staple in the VMM-268 training plan to further our capabilities and support operations.”

The idea for exercises like Southern Jackaroo is for the MRF-D and the various Australian Defence Force units to integrate well working together, interoperability is key for the ACE to work with their Australian counterparts and the CASEVAC exercise was a case in point for this sort of integration, as Captain Crisp explains her role and working along side her Australian allies. 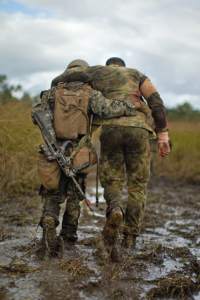 “As the lead planner, I had contact with Shoal Water Bay Training Area  ADF personnel who were in charge of coordinating the range complex, In order for us to gain entry using the airspace and coordination between the Unmanned Air System assets operating to the north of the objective as well as live fire ranges having to cease operations before we got into the training area.”

“Furthermore, Brisbane Center (Airservices Australia ATC) were brought in to manage the flight from Townsville to the south to ensure civilian aircraft were safely diverted from the area during operations”

Working with the ADF was extremely smooth with no issues noted which led to smooth operations within
the range complex and surrounding airspace.

The experience for VMM-268 crews deployed to Darwin is something that is viewed by them as a unique and great opportunity to fly in vast openness of Australia’s Top End and for Captain Crisp she explains that for her she has enjoyed the unique opportunities of deploying to Darwin and training along side the ADF as well as how the squadron has benefited being deployed to Australia again.

“We have definitely hit the ground running since arriving in Darwin and flying in Australia is a phenomenal opportunity to train in a different operating environment and allows us to refine our proficiency in tactics and   techniques in a range of training areas.”

“At the squadron level, being in Australia has provided incredible training opportunities. We are able to train to a higher skill set with the ability to fly Reduced Visibility Landings and Low Altitude Tactics among other things, which enhances our mission readiness.

Training with the ADF has also provided the opportunity to gain new perspective on tactics and operations which cannot be overlooked. Overall, it has enhanced our ability to operate at a higher level in all areas.

On a personal level it has been an absolutely incredible experience, my last deployment was to the Middle East so this has been an exciting change. The people have been so kind and welcoming and being able to experience the
culture and surrounding areas has been top notch, not to mention how great the flying is!”

In 2022 a full Marine Ground Air Task Force has been deployed to Australia’s Top End although MAGTF’s can range in size up to 2200 MRF-D personnel will conduct combined training with the ADF this year, with Exercise Southern Jackaroo forming part of a series of war-fighting training activities.

The MRF-D is part of the US force posture initiatives which were expanded at AUSMIN (Australia, United States Ministers meeting) 2021 to include enhanced air cooperation, enhanced maritime cooperation, enhance land cooperation and the establishment of a combined logistics, sustainment, and maintenance enterprise.

APD wishes to thank Marine Rotational Force-Darwin and Australian Defence Force, and especially Captain Avery Crisp for their assistance in producing this article. 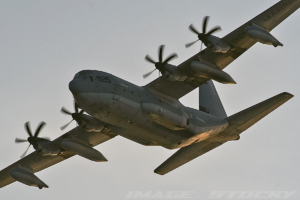 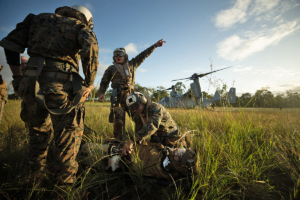 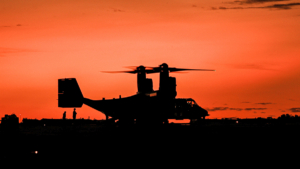