VFA-106 Honors Storied Career of the Valions with Tribute Hornet

Earlier this year, the Gladiators of VFA-106 rolled out a special legacy F/A-18C Hornet with a special paint scheme to honor the storied career and rich heritage of sister squadron VFA–15, the “VALIONS”, who were decommissioned this past spring after 75 years of service.

Sporting a special “seagull” paint job in honor of the squadron’s time operating the A-7E Corsair II, the Hornet was flown at just a few select air show sites by the Navy Tac Demo team, and APD was honored to fly alongside at the TICO Warbird Air Show in Florida to produce images to help tell the story.

Born on Jan. 10, 1942 as Torpedo Squadron Four (VT-4) aboard the USS Ranger at Grassy Bay, Bermuda, just one month after the attack on Pearl Harbor, the VALIONS flew six different aircraft, operated from fifteen aircraft carriers and made 36 major deployments around the world.

They began service flying the TBD Devastator, followed soon after by the TBM Avenger, protecting the sea-lanes between Bermuda and Newfoundland before transitioning to the AD-4 Skyraider in March 1949. They were aboard the USS Ranger when it escorted British Prime Minister Winston Churchill and HMS Queen Mary to the Quebec Conference in 1943, where the Allies discussed plans for invading Italy and France. 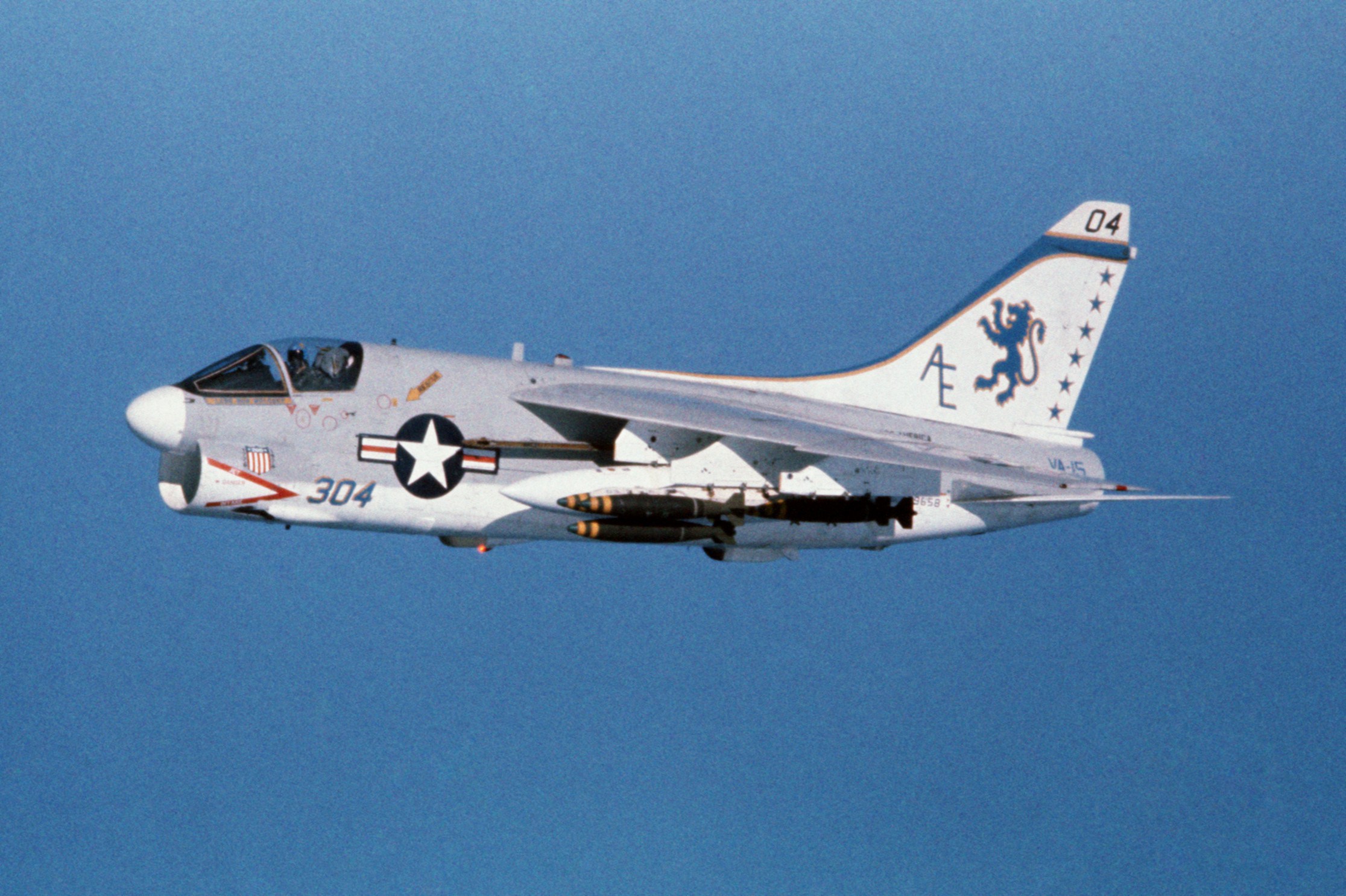 “It’s incredible, it’s an honor and a privilege to fly this and perform in front of people,” said VFA-106 demo pilot Lt. Scott “MacGruber” Lindahl.

VALIONS flew over 2,600 sorties over North Vietnam in the late 60s, and were in the Arabian Gulf in 1980 when Iran released American embassy hostages. They flew some of the first sorties in support of DESERT STORM on Jan. 19, 1991, and carried out strike missions until the suspension of hostilities was ordered a month later.

In the years that followed, they flew over 300 sorties in support of operation ALLIED FORCE, cruised the Northern Arabian Gulf in support of Operation SOUTHERN WATCH, and put bombs on target while patrolling the skies of southern Iraq.

The squadron was on their way home aboard the USS Enterprise when they watched terrorists attack the homeland on Sep. 11, 2001. They immediately turned around for the Northern Indian Ocean, and helped bring the tip of the spear into Afghanistan in support of Operation ENDURING FREEDOM, flying 185 sorties and dropping 232,000 pounds of firepower.

Operations after that focused mainly in support of the wars in Afghanistan and Iraq, as well as searching for pirates off the Horn of Africa in 2006. Close to 2,000 combat sorties were flown up until December 2011, when VALIONS were deployed aboard the USS George H. W. Bush and maintained a 100% combat sortie completion rate in support of Operations ENDURING FREEDOM and NEW DAWN.

The loss of VFA–15 came as a victim of the 2017 National Defense Authorization Act, with the Navy eliminating three squadrons and reducing Carrier Air Wings to nine until the number of deployable carriers can fully support a 10th wing, or until Oct 1, 2025 (whichever comes first), at which time the Navy will return to a strength of 10 Carrier Air Wings.

“Inside both tails, those are the names of every single commanding officer that has ever commanded VFA–15”, pointed MacGruber as he brought me out to see his demo jet.

A “Don’t Tread On Me” flag is painted on the air brake too, showing nicely when the jet makes its signature “photo pass” for spectators.

To mark the occasion and beginning of the show year, the Navy and Tac Demo VFA-106 team agreed to fly a one-of-a-kind photo shoot that had never been done before, joining formation with the F4-U Corsair “Korean War Hero” and P-51D Mustang “Quick Silver” (piloted by Jim “Torc” Tobul and Scott “Scooter” Yoak).

After a through briefing (two actually), we held on the runway until the end of MacGruber’s rehearsal, and proceeded immediately to takeoff heading east towards NASA’s Kennedy Space Center. It doesn’t take long for an F/18 to catch up, and before we knew it MacGruber was in formation and the photo shoot began.

Time is short and so is fuel; in total we had under six minutes to produce images before heading back so another demo could take the airspace.

“We were honored to be a part of it, one of my top favorite flights for sure”, said MacGruber. “For me personally, that was the first time I ever joined up with a P-51 or F4-U, and it was incredible. Both of those aircraft I grew up watching at airshows, and that’s really what inspired me not only to be a pilot, but to apply to be a demo pilot as well.”

The VALIONS officially deactivated this past spring, with a ceremony marking the occasion scheduled for May 31 at NAS Oceana, VA. The squadron gave up its last aircraft in December 2016.

“It has been my distinct honor and privilege to be the final (but hopefully not last) commanding officer of the best Strike Fighter Squadron in the Navy”, said VFA–15 CDR Matt “Disney” Stevenson in a recent statement.

“They earned the 2016 Retention Excellence Award, the 2016 EAWS Pennant and the 2016 Blue Medical “M”, all while supporting eight detachments in the last year”, he added. “These Sailors have been the epitomy of accomplishing so much with so little and I could not be more proud.”

“They have handled the deactivation and the stormy seas that have come as part of that process with grace and dignity and they continue to produce Full Mission Capable aircraft even today as we help VFA-106 with their maintenance efforts,” he added. “They have humbled me and taught me more than they will ever know.”

With thanks to Greg McNeely and the Aeroshell Aerobatic Team for flying photo ship, as well as VFA-106 and the U.S. Navy Tac Demo team. 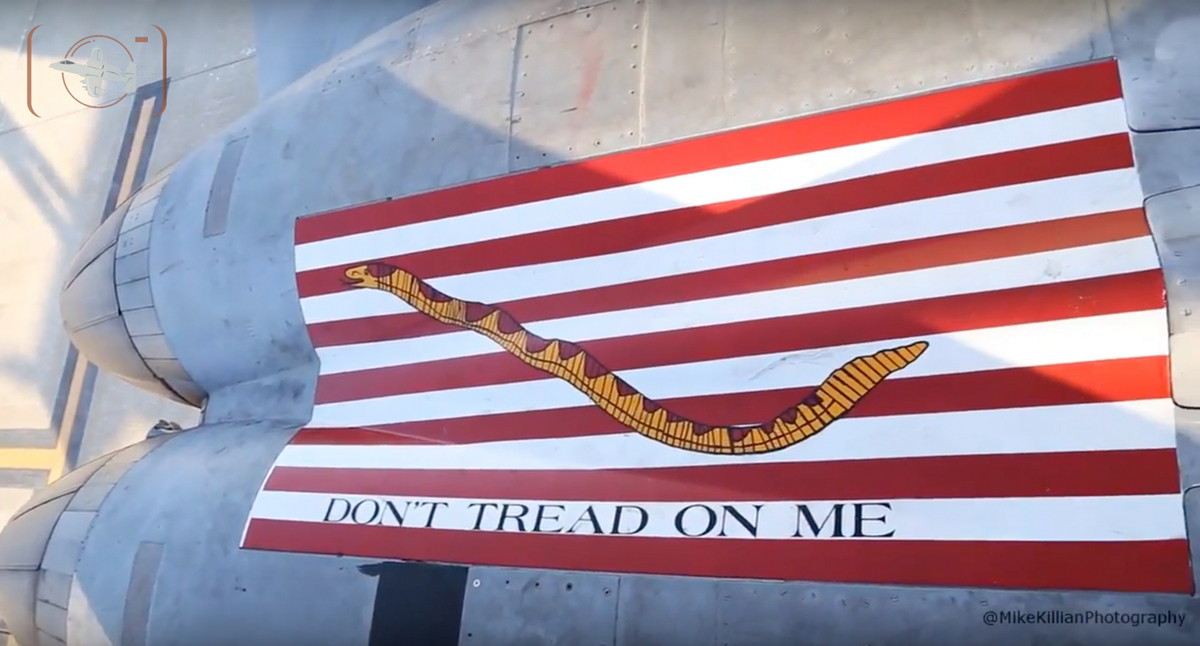 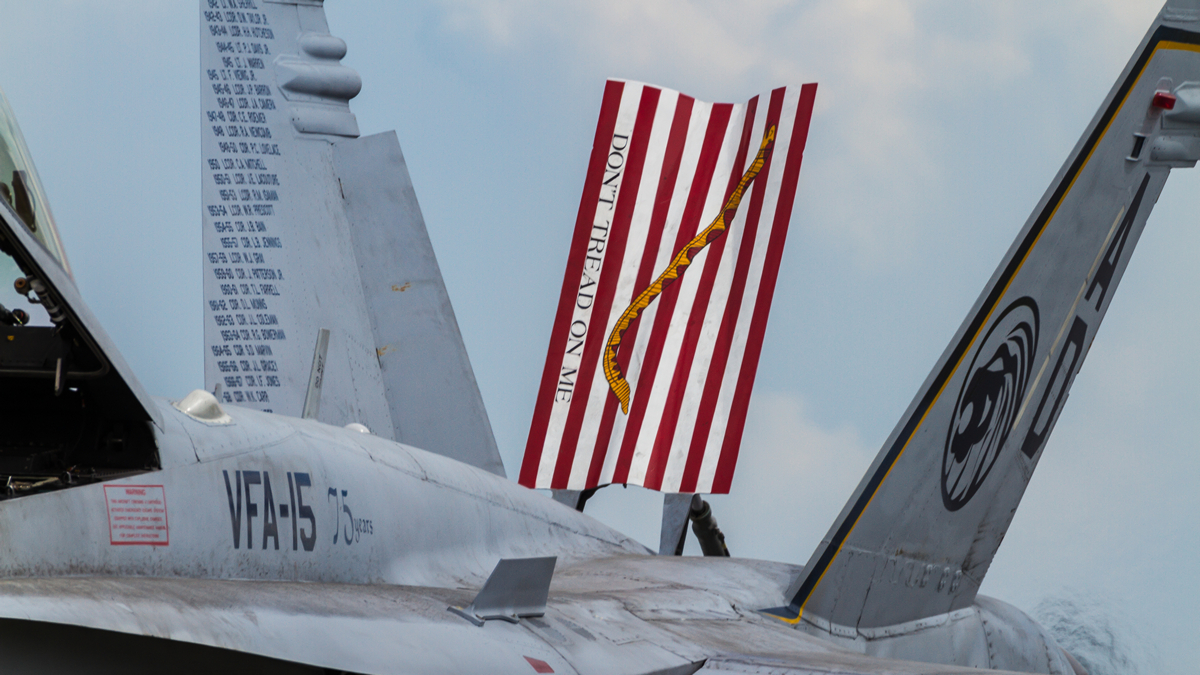 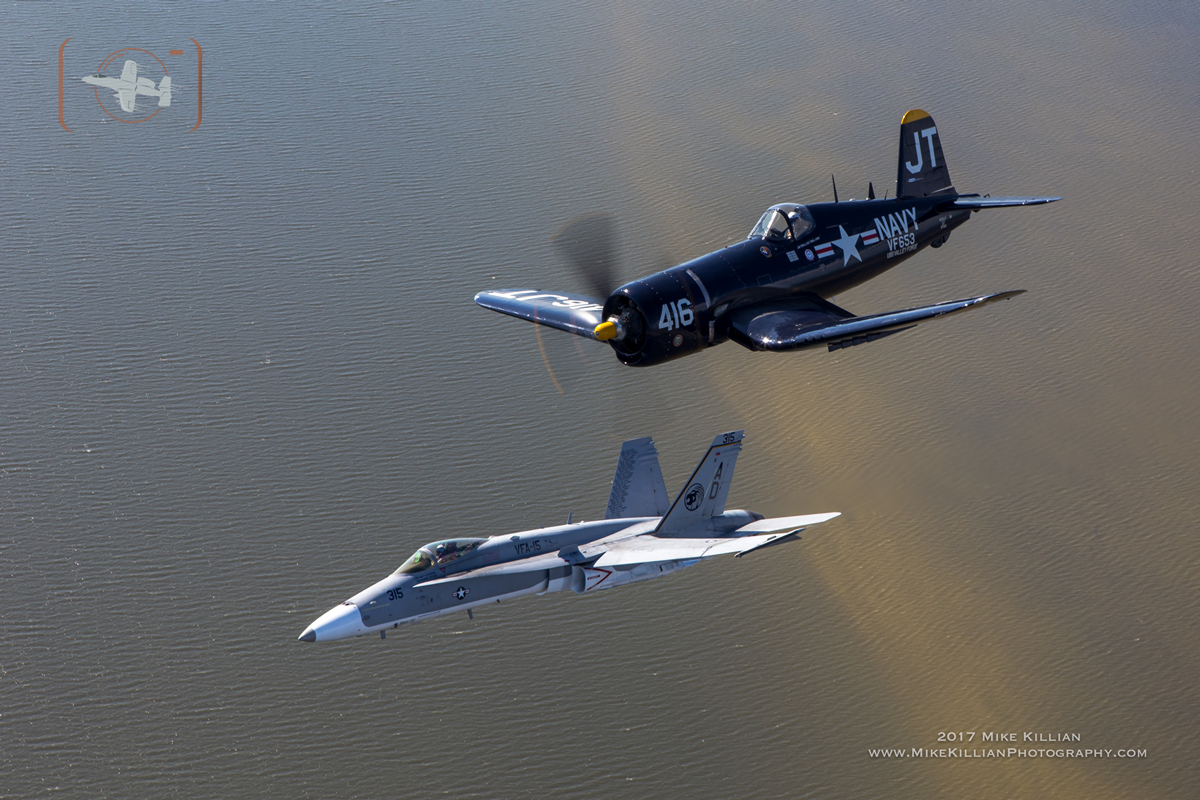 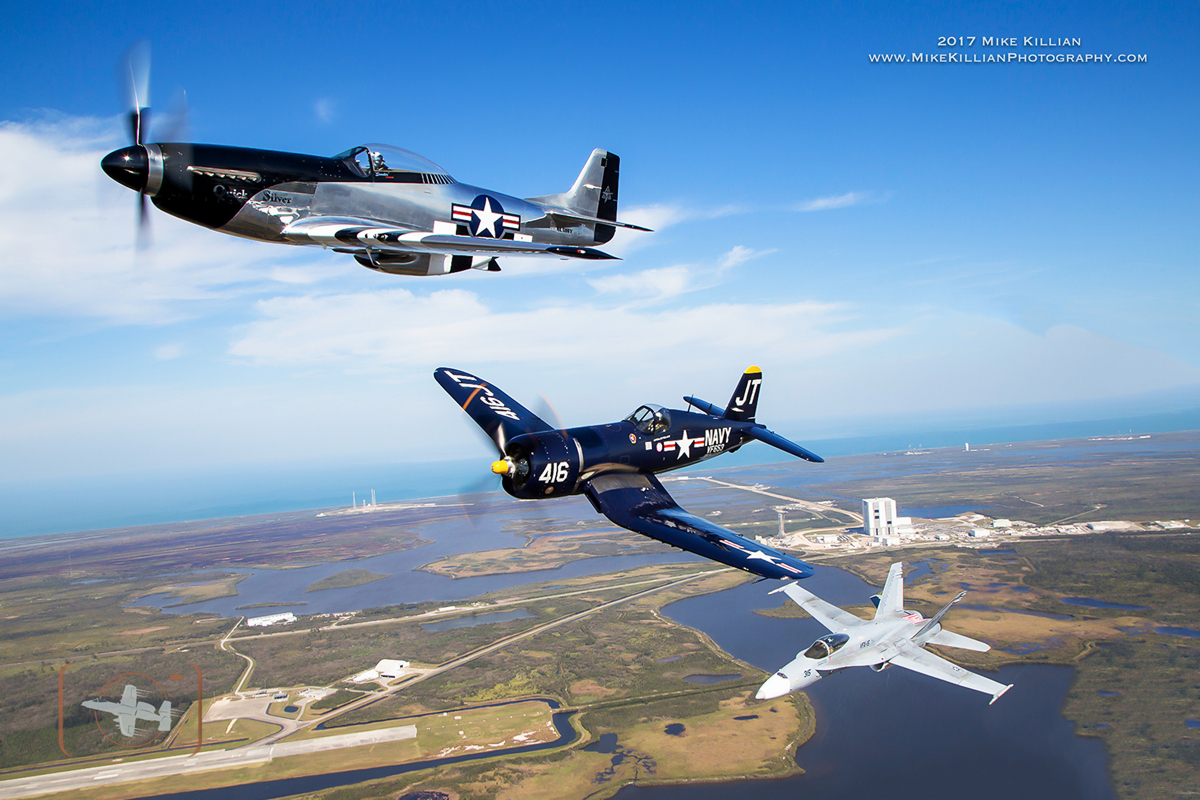 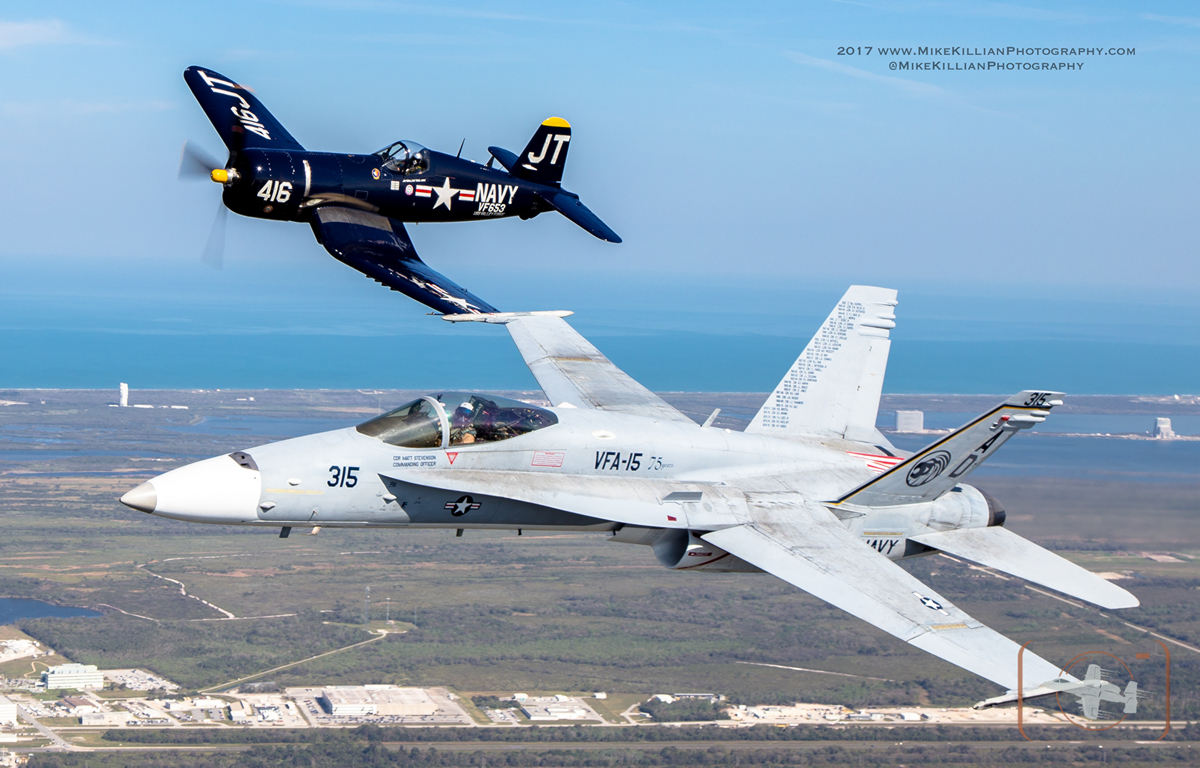 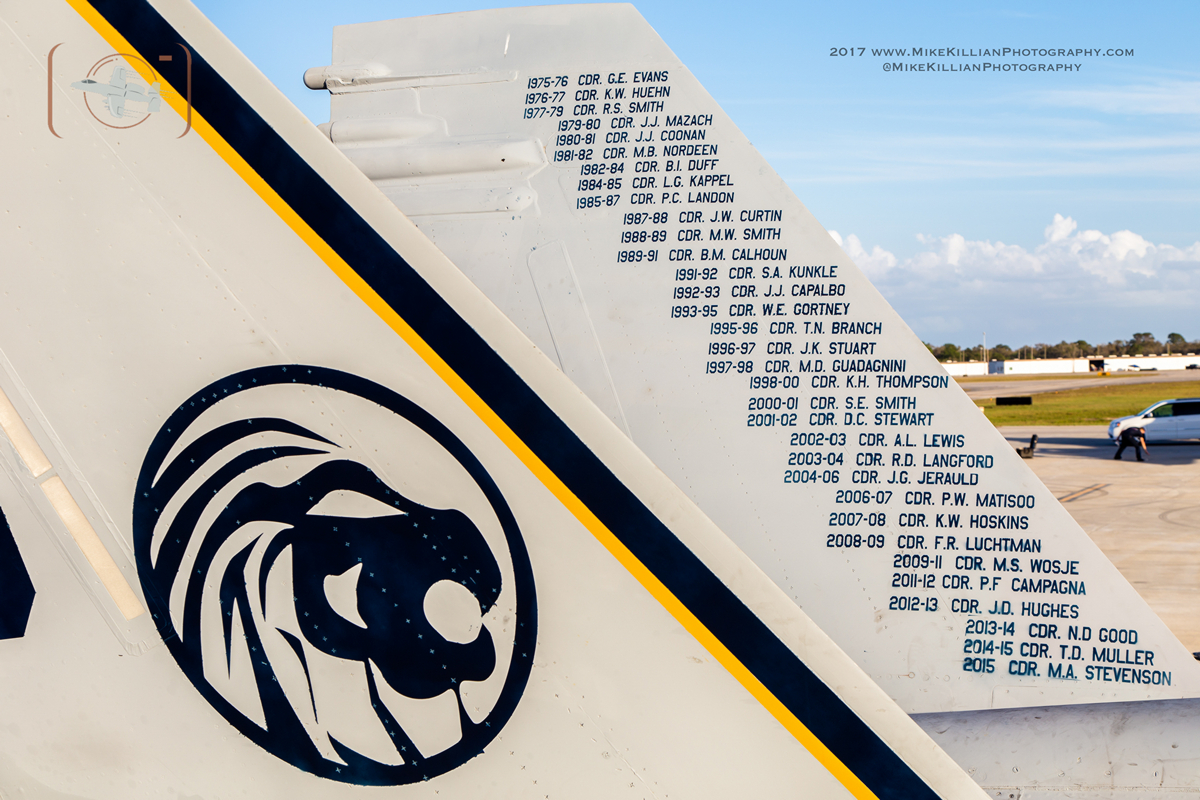