Spread out across the United States, US Coast Guard Air Stations are unique at being a key element in both domestic as well as foreign operations.

Air Station Miami showcases all of the Coast Guard’s unique mission set at one location. While not the biggest Air Station by far, it is definitely one of the busiest all year round. Situated as part of the Coast Guard’s 7th District, Air Station Miami operates a mix of 5 HC-144 Ocean Sentry fixed wing aircraft and 5 MH-65E Dolphin Helicopters. Based at Opa Locka in Miami Dade County, the Station was once part of the US Navy Base that had existed on the premises.

The Station has just recently (Fall of 2020) completed the upgrading its helicopter crews to the “Echo” model, having previously flown the MH-65D “Delta” model. The “Echo” features a glass cockpit with upgraded avionics along with 4 new Multi Functional Display screens which allows MH65 pilots better situational awareness, this advancement is extremely helpful in reducing pilot workload in complex scenarios during challenging weather. During 2020 the Station’s Helo pilots rotated in segments through the Coast Guard’s advanced flight training school in Mobile, Alabama to get qualified on the new upgraded version of the Helicopter. The 3 week course includes both simulator training as well as multiple flights on the new type.

The Station has a cadre of crew that range in both sections from the younger end of the Coast Guard pipeline. Coast Guard Technicians, Swimmers or newly minted MH-65 or HC-144 pilots can find themselves getting acclimated to their platforms in Miami, gaining their first operational experience prior to moving around in their respective fleets.

The challenges the Air Station faces are part of the same challenges the Coast Guard’s 7th District faces. The 7th District’s area of responsibility is approximately 1.7 million square miles, it stretches down south from the border with Cuba all the way up to South Carolina with 34 foreign countries and territories within its jurisdiction including Puerto Rico and the Bahamas.

Air Station Miami’s aircraft have regular scheduled deployments to many of these locations, primarily to Puerto Rico and Central America. These deployments are in support of Operation Unified Resolve, the Organized Crime Drug Enforcement Task Force (OCDETF) program and the Caribbean Corridor Strike Force (CCSF). The Station’s HC-144 Ocean Sentry aircraft, with an airborne sensor suite, preform ongoing sorties over these waters searching for drug runners using a myriad of shipborne vessels in an effort to evade detection.

When visiting the Station, the friendly rivalry between the 2 sections is noticeable. Both of the Station’s elements take part in both counter drug as well as rescue missions, with these 2 mission types being the bulk of the Station’s operational assignments. Both sections capabilities seemingly complement each other.

Much of the War on Drugs is shrouded in secrecy along with much of the techniques used to identify possible targets ahead of time is done in the shadows. The Coast Guard’s part is usually the end of the investigative line and sees light often with its frequent drug busts. A large part of this War takes place off the Southern Florida coastline and within the Miami Air Station’s AOR. The “Drug Corridor” as it is known, is made up of mostly (but not only) small “go fast” boats from South and Central American countries transiting via the Caribbean with its final destination aiming for coastal USA. Every so often low vis, indigenous submersibles are detected as well. The task to intercept these shipments takes place mostly in International waters in the Caribbean and the Eastern Pacific, Miami’s air assets play a pivotal role in stopping these attempts. Air Station Miami alone, assisted with the seizure of a combined amount of almost 2 tons of illegal drugs during 2020.

The importance of each platform’s unique capabilities and proof that they are on constant alert can be showcased by the sheer amount of routine interdiction missions. In this category the HC-144 with its capability of staying airborne for almost a dozen hours and ability to fly “low and slow” is instrumental in identifying the multitude of fast boats making attempts to transit drugs between the various islands en route to the US. The HC144 and its crews conduct hours upon hours of maritime patrol. Miami Air Station HC-144 Ocean Sentry aircraft deploy routinely to Puerto Rico. Once a suspicious boat is identified in open waters, the Ocean Sentry crew vectors other USCG Boats towards the suspected boat. These missions which involve the monitoring of the suspected vessel by the Ocean Sentry, until interception by another CG platform, can take anywhere up to 10 hours. The suspicious vessels are generally intercepted by a Coast Guard Cutter or a Puerto Rican Government boat. This story repeats itself on almost a weekly basis, with seizures in the amounts of hundreds of KGs in narcotics in each bust are the normal amounts tend to being found on the traffickers. Last year the Coast Guard Commandant recognized an Ocean Sentry Crew for their assistance in “busting” a shipment of narcotics that weighed over 600 kgs.

On the other side of the Office, MH-65 pilots have the mission to provide assistance to the hundreds of thousands if not millions of boats that sail the waters off the coast of South Florida. They are called in for any type of imaginable dire situation at sea, whether a sinking boat or someone having a heart attack on a cruise ship, MH-65 pilots are on 24 hour, 7 days a week alert to respond to any call that comes in.

On a standard mission profile the MH65 gets airborne with a crew of 4, a Pilot Commander and Co-Pilot, add to that a Flight Mechanic who operates the hoist as well as an AST (Aviation Survival Technician) more commonly known as a “swimmer”, whose job it is to rescue individuals from either the water or the water borne vessel they are in.

For any Coast Guard personnel stationed in and around Florida and the Caribbean, the one constant thought in the back of every serviceman’s mind is how they are best prepared for an incoming Hurricane. In this area of the US and particularly in the MH65 community, whether pilot, swimmer or technician, all are geared towards how they can best prepare in the event of extreme weather.

Interestingly, one of the key issues COVID has brought with it to the Air Station to complicate matters is not a medical one, rather a real estate one. With people from across the USA moving to the less restrictive State of Florida, Miami has become the center of one of the biggest real estate booms in the US. The prices of housing in certain areas has tripled leaving challenges for service members stationed in the area to find housing properties available and affordable to rent when posted to the Miami area.

Though counter interdiction missions are probably on the more exciting end in the waters off Florida’s coast, the Station’s run of the mill daily operations comprises of a seemingly never ending amount of distress calls from the various boaters that find themselves in a life threatening situation and in need of immediate assistance.

Miami has an abundance of waterways that rivals only its congested highways. Given that there are so many private boats, CG Service members, especially on the MH65 side of the Station, see ship to shore rescue as their main occupation.

Often training missions are cut short by calls for a rescue. During our time at the Station we witnessed this more than once including the cancellation of a training flight we were meant to join in favor of a rescue call.

During the week we visited the Station in the middle of June, there were already Hurricane warnings creeping up from the Caribbean, all of the base’s leadership were constantly looking for ways to get the Station’s men and women best prepared for the incoming storm. This type of preparation starts the moment meteorologists can provide an indication for a storm approaching the farthest reaches of the AOR.

While everyone had their eyes on the Storm’s path, daily rescue operations are ongoing. On the random Tuesday night we had packed up and gone home, in the middle of the night a single uncorrelated MAYDAY call was made over a radio that was pinpointed to an area at sea 30 miles from Stuart Florida. LT N. (full name withheld for security reasons) launched with his crew and MH65 to investigate. The MH65 crew started a search pattern and on the last leg of the search (with an already lowered BINGO fuel flight profile), the MH65’s Flight Mechanic noticed a flashing light in the dark ocean. The Pilot spoke with Sector Miami which updated that a rescue boat launched to the location was still 2 hours from the scene. The crew decided to lower a swimmer and basket to recover the 2 men that went fishing and their dog. One of the survivors happened to have a GPS Navigation device the flashing light on the device, this is what the MH65 Flight Mechanic spotted and provided the ability to identify them at night, the individual managed to send one call out on the boat’s radio just before their boat sank and they ended up on a dinghy raft. The crew recovered the survivors and the dog to Witham Field near Stuart, Florida and landed there with very little fuel to spare.

Two nights later, as we were preparing for a night shoot with one of the “on call” MH-65s, another call came in, this time an individual who had gone kayaking failed to return home, this sparked an alert launch to start Search and Rescue efforts, thankfully, an hour later, the search was called off when the individual was located safe and sound by his family. This is just another example of how active things can get on just a “regular” day.

Like other Military installations, the past year has been a challenging one for the Miami Air Station. While all military installations have had to find protocols regarding their service members interactions with civilians with regards to COVID, the Coast Guard has had to become creative since it is an integral part of lifesaving missions in the civilian World. Adding to their “regular” missions, transporting and assisting in the rescue and of COVID afflicted patients has been added to their job description and mission set over the past year. Like many other Service members in other branches, the Men and Women of Air Station Miami are constantly adapting to the new era post pandemic.

The Author would like to thank the Men and Women of Air Station Miami, 7th District Public Affairs and Tomcat for hosting him for a week and making this feature possible. 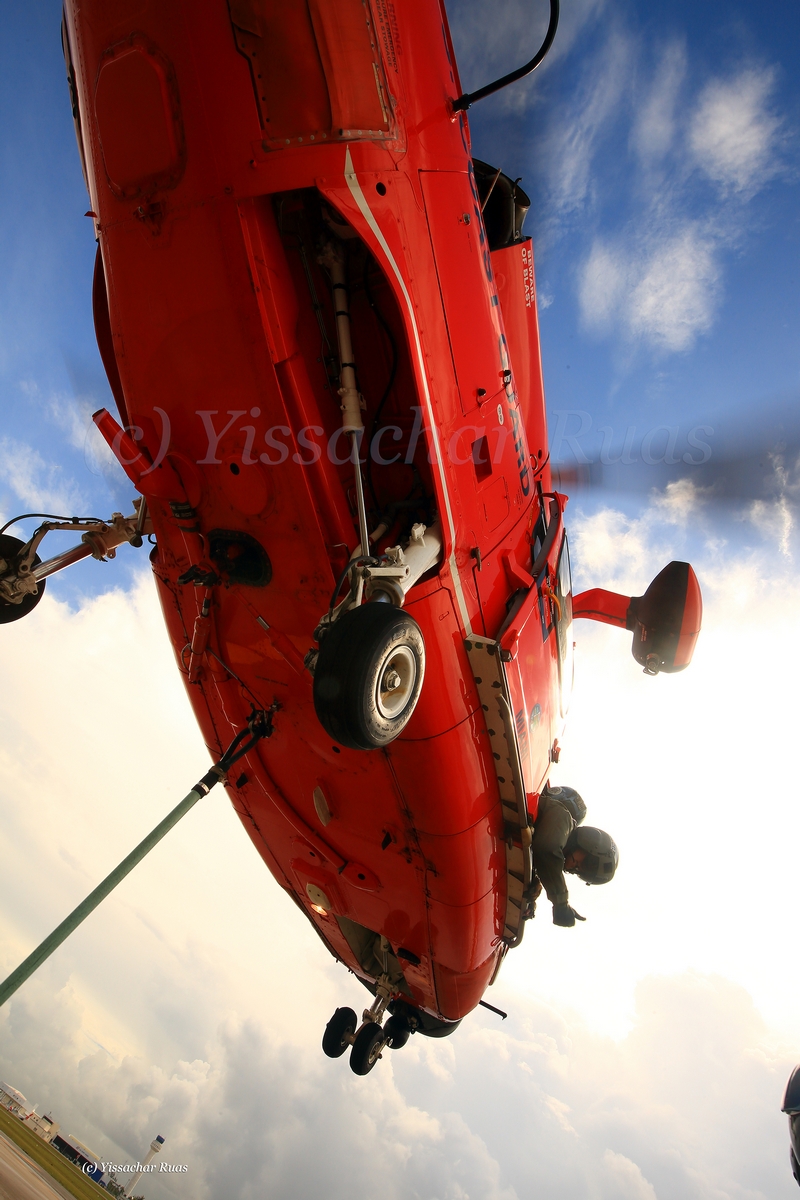 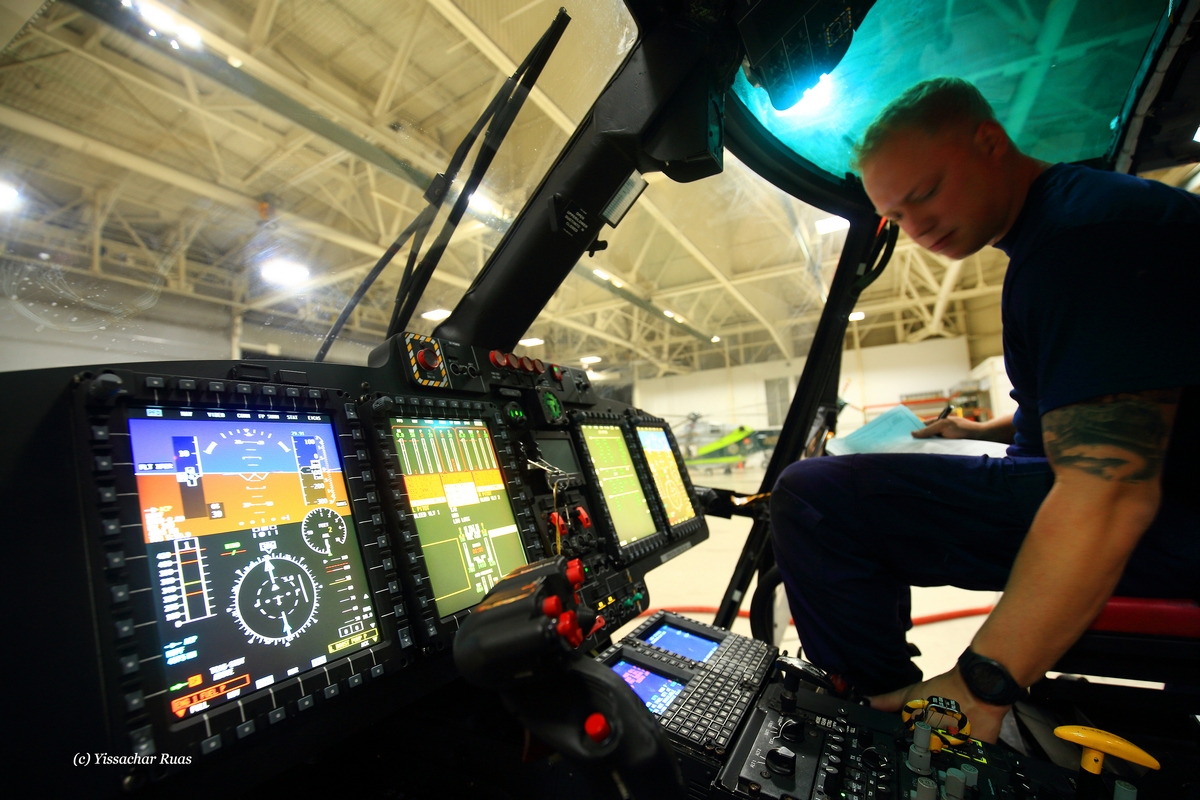 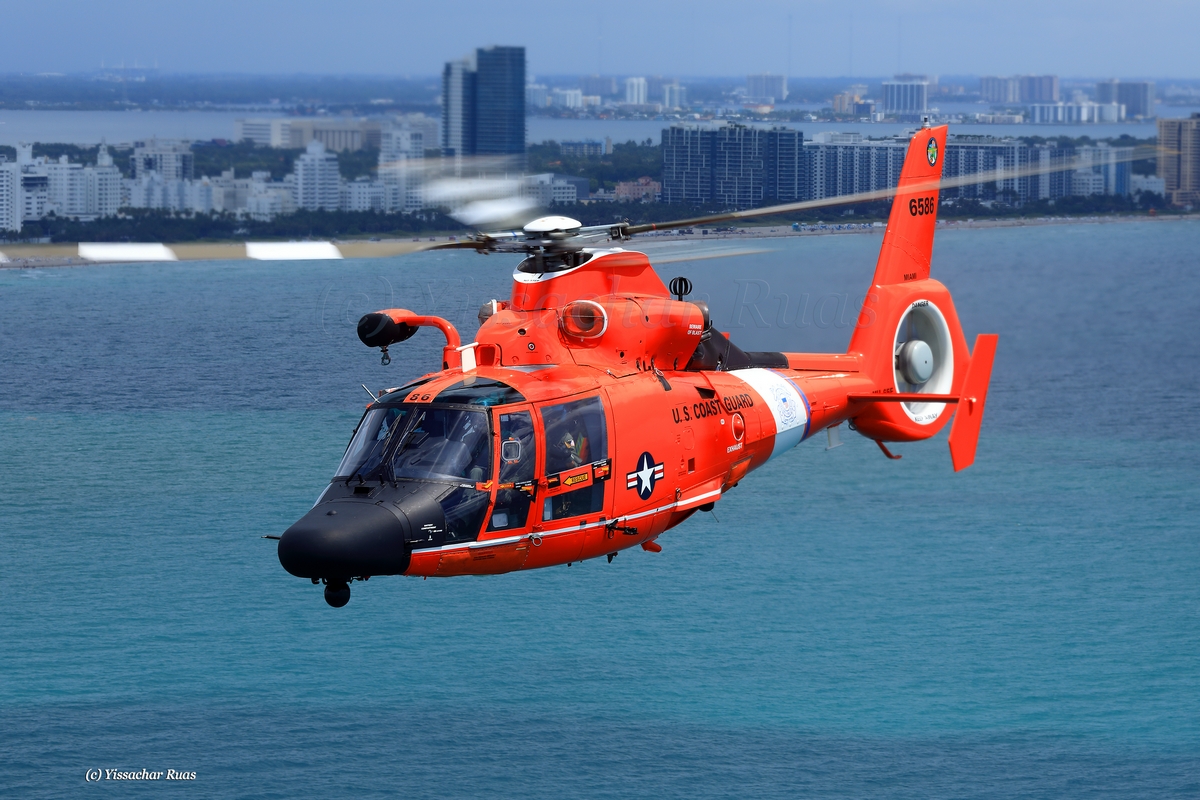 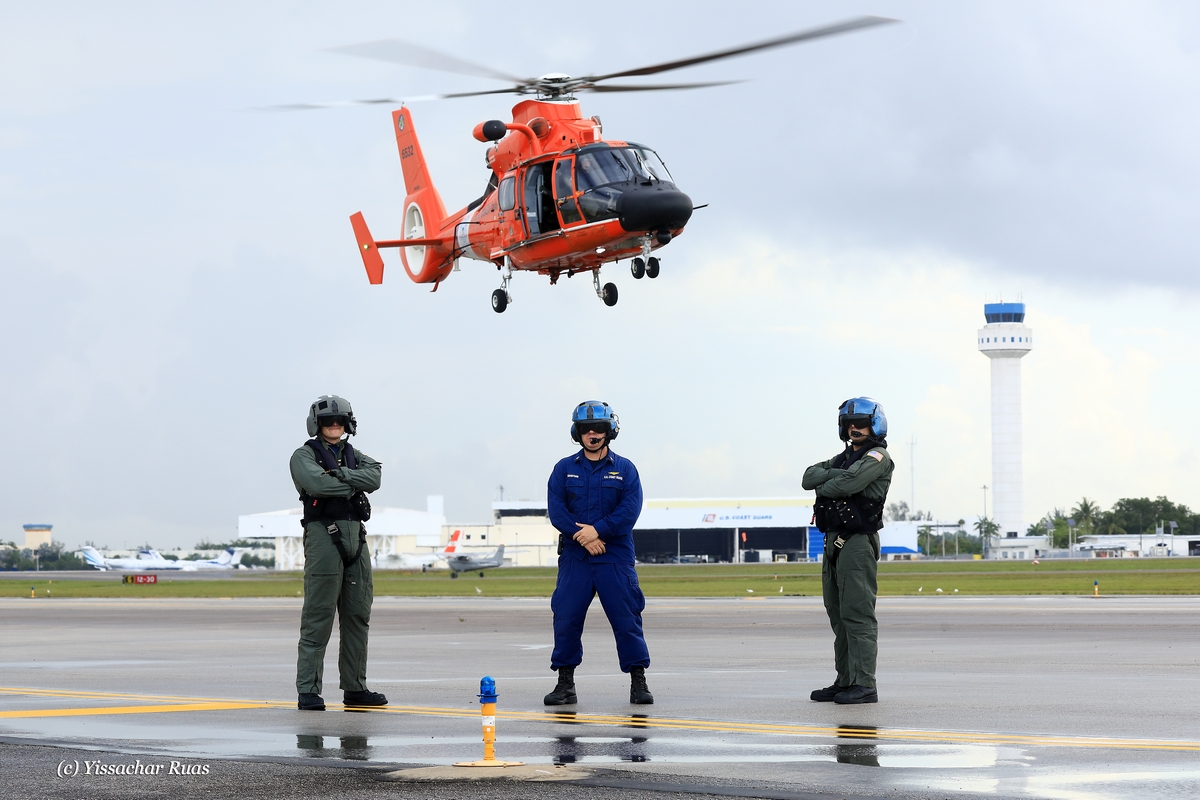