Tigers roar over the Top End

Tigers roar over the Top End.

Royal Australian Air Force (RAAF) Exercise Diamond Storm 22 which is the termed as the “graduation exercise” apart of the RAAF’s six month Air Warfare Instructors Course (AWIC -pronounced A’wick) has seen a number of firsts during the 2022 iteration of the exercise held in Darwin since the exercise was lastly held back in June of 2019.

Our feature Video Documentary will be out later this week (29th June) highlighting the AWIC course, but since 2019 legacy platforms such as the F/A-18A/B Classic Hornet and PC-9 have been retired from service which has seen new assets come online in particular the introduction of the F-35A Lightning to replace the RAAF’s front line legacy fighter.

AWIC is not just focused on training students from the RAAF’s Air Combat Group fast jet fraternity, the exercise is designed to take some of the most talented aviators from across Air Force through a six-month training program, with the purpose of the course to create platform and capability experts, key integrators of air combat effects for the joint force, and most importantly, instructors for their communities.

The course is the most high intensity form of training the students will ever participate in during their tactical careers. By the time the students get to Diamond Storm, they should have already achieved the peak level of planing and integrating tactics and the purpose of Diamond Storm is to bring everything they have learnt over the six month AWIC course together and lead everyone to the next level achieving objectives to the mission sets. 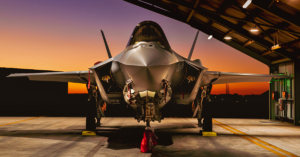 Exercise Diamond Storm 22 is all about teaching the students how to integrate and layer air combat effects across the joint force to solve offensive counter air problems – taking the fight to the adversary. Missions require coordination across five warfare domains – air, land, maritime, space and cyber – so that candidates can overcome threats, hit their targets, and return home safely.

As mentioned there has been a number of firsts for this years AWIC course and Diamond series of exercises which has seen crews from the P-8A Poseidon, PC-21 (4 Squadron) and F-35A Lightning communities participate for the first time.

Wing Commander (WGCDR) Jordan Sander the Commanding Officer of No. 2 Operational Conversion Unit based at RAAF Base Williamtown, gave a unique insight into what it is like bringing a fifth generation fighter capability into AWIC and the Diamond Exercise series for the first time, which would see F-35A AWIC students if successful upon graduation become Fighter Combat Instructors.

“The detailed planning for the first course began in January 2021, a year before AWIC22 began. No. 81 Wing (All RAAF F-35 Squadrons come under 81WG) which selected an F-35A Course Director who was responsible for developing the high-level structure of the course,” WGCDR Sander said.

“There was consideration of how many sims and flights would be required for the F-35A FCI course. This included the learning outcomes for each flight and sim, and the resources required which includes the airspace, Red Air elements and ground threats. The F-35A Course Director then delegated the development of mission specific detail to several Phase Commanders.

Successful return to Darwin for this 2OCU Lightning during Diamond Storm 22. -Jaryd Stock

Phase Commanders are given responsibility for a section of the course containing several flights and sims. With the learning outcomes and assigned resources identified by the Course Director, the Phase Commanders would develop the detail for each flight and sim. It was a tremendous amount of work and we are very proud of what we achieved.”

The quality of the first F-35A FCI course has exceeded expectations within 2OCU and also ACG reflecting the technical competence and devotion to duty by all the staff in the F-35 equiped Squadron. Like anything in Air Force, there are many people behind the scenes who make this all possible not just the pilots.

And to highlight that point in Diamond Storm 22, the last of Classic Hornets retired back in November 2021 with 75 Squadron, which is based at RAAF Base Tindal located south of Darwin in the Northern Territory, the squadron transitioned from Classic Hornet to Lightning operations last December.

What was surprising for onlookers and defence analysts was that 75 Squadron were participating in Diamond Storm, meaning that the workload being done by those “boots on the ground” within and contractors supporting the Squadron and the mountain like load of work carried out by ACG to ramp up operations to get them to a level where they could participate in the exercise would have been immense, yet rewarding for all of those involved.

WGCDR Sanders details the complexity of introducing the F-35 to the AWIC series, “Our operations, mission support, security, orderly room, logistics, off-board information systems and maintenance staff; the workforce is a mix of uniformed, public servant, and contractors.

The hardest thing has been doing this in the middle of a transition as we’re still bringing the F-35A into service. This transition has meant there are low experience levels and a new aircraft type where things are often new or unknown.”

Even though big exercises like Diamond Storm test the capabilities especially when operating an new aircraft as WGCDR Sander mentioned, there is still the relationship between the RAAF and U.S. Air Force (USAF) with the later being a key to enable the RAAF to establish its own operations of the aircraft. Those experiences based on what the USAF has learnt operating the F-35 and the capabilities it brings benefits the RAAF, as they get experience and learning in how to overcome obstacles and challenges that are faced operating a new aircraft, apply what they have learned and provide a solution according to the problem at hand.

The relationship with key personnel within the USAF Weapons School (at Nellis Air Force Base in Nevada) has been key in both tactics and FCI course development as well. That key relationship began with the RAAF’s own conversion onto the F-35A (completed with the 61st Fighter Squadron at Luke Air Force Base in Arizona), and in doing this it has been seen as critical clog in the wheel for ACG and F-35 Squadrons to ease if you will into F-35 Lighting operations. 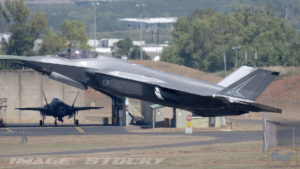 A35-025 rocketing out of Darwin- Jaryd Stock

This is the 68th year for the FCI course and it has a rich history in training Australia’s best Fighter Pilots, in other words this is the Aussie version of Top Gun. But with the introduction of new types of aircraft such as the F-35 the thought could be what was applicable even back in 2019 is not applicable today because new more capable aircraft have been introduced to service and things have changed into how tactics are now developed, and that is true to a certain extent but the solid foundation of which the exercise is based on is still there as WGCDR Sander explains.

“The overall flow of the course remains unchanged. We start by focusing on the candidates’ instructional skills before we move onto air-to-air, ending in a Defensive Counter Air exercise called Diamond Shield (Which was held in May from RAAF Bases Amberley and Williamtown).

We then conduct air-to-surface skills training ending in a large offensive exercise called Diamond Storm. Everything below this high-level course flow needed to be adapted to F-35A and the threat identified for the course.

Given we only run this course every two to three years, the course needs to be constantly rewritten with ongoing upgrades and changes to our capabilities, the threat and therefore our tactics.

Creating these challenging missions is not without its issues; every time we fly, we need to do so against a capable adversary. In this regard, 2OCU has been incredibly well supported by numerous units across Defence. These include other F-35A squadrons who provide the adversary air threats, and contractor operated ground-based systems that represent surface-to-air missiles. Without the level of complexity that these assets provide it is hard to truly challenge the F-35A and the students.” stated WGCDR Sander

Apart of complexity and challenges of the Diamond Storm exercise is the Marine Rotational Force-Darwin Aviation Combat Element led by VMM-268 ‘Red Dragons’ from Kaneohe Bay, Hawaii participating in Diamond Storm 22, they will be the subject of our next article on AWIC 22.

This article wouldn’t be possible without the help from the Diamond Storm RAAF Public Affairs team, a huge thank you for your assistance in this series of articles. 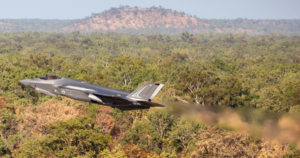 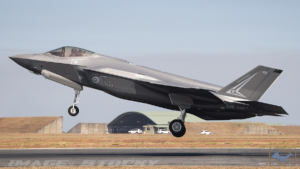 A35-048 rotating out of Darwin on another sortie for Diamond Storm- Jaryd Stock. 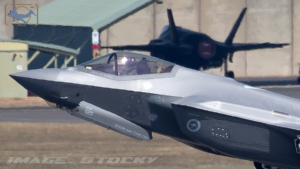 025 tucking up the gear. -Jaryd Stock 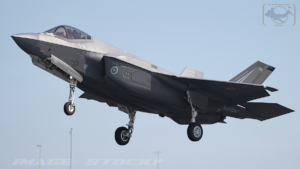 004 blasting out of Darwin. -Jaryd Stock