With the warm weather signifying the coming of spring in many of the Sunbelt states of the U.S., this same weather also marks the beginning of the air show season around the world.

Tucson, Arizona, home to Davis-Monthan Air Force Base, often has mild 70-degree temperatures this time of year, with very little rainfall. This ideal aviation weather helps attract squadrons from around the U.S. to train at Davis-Monthan AFB under the Total Force Training program, formerly known as Operation Snowbird.

Davis-Monthan AFB began in 1925 as Davis-Monthan Landing Field, which evolved into Davis-Monthan Airport and later became Tucson Army Air Field in 1940. During WWII, when its military use became significant, the base became Davis-Monthan Army Air Field and was used by bomber groups for training and observation missions. During this time the Douglas B-18 Bolo, Consolidated B-24 Liberator and Boeing B-29 Superfortress bombers were seen flying in the skies of Tucson.

After WWII, Tucson’s low humidity and alkali soil made Davis-Monthan an optimal location for aircraft storage and preservation. The base was used as a storage site for aircraft no longer in service. This would provide a foundation for what’s known today as the 309th Aerospace Maintenance and Regeneration Group (AMARG), also known as….”The Boneyard.”

In 1948, at the onset of the Cold-War, Davis-Monthan Army Air field became, what is known today as: Davis–Monthan Air Force Base and is now the headquarters of the Twelfth Air Force (12 AF; Air Forces Southern, AFSOUTH) of the USAF’s Air Combat Command (ACC). 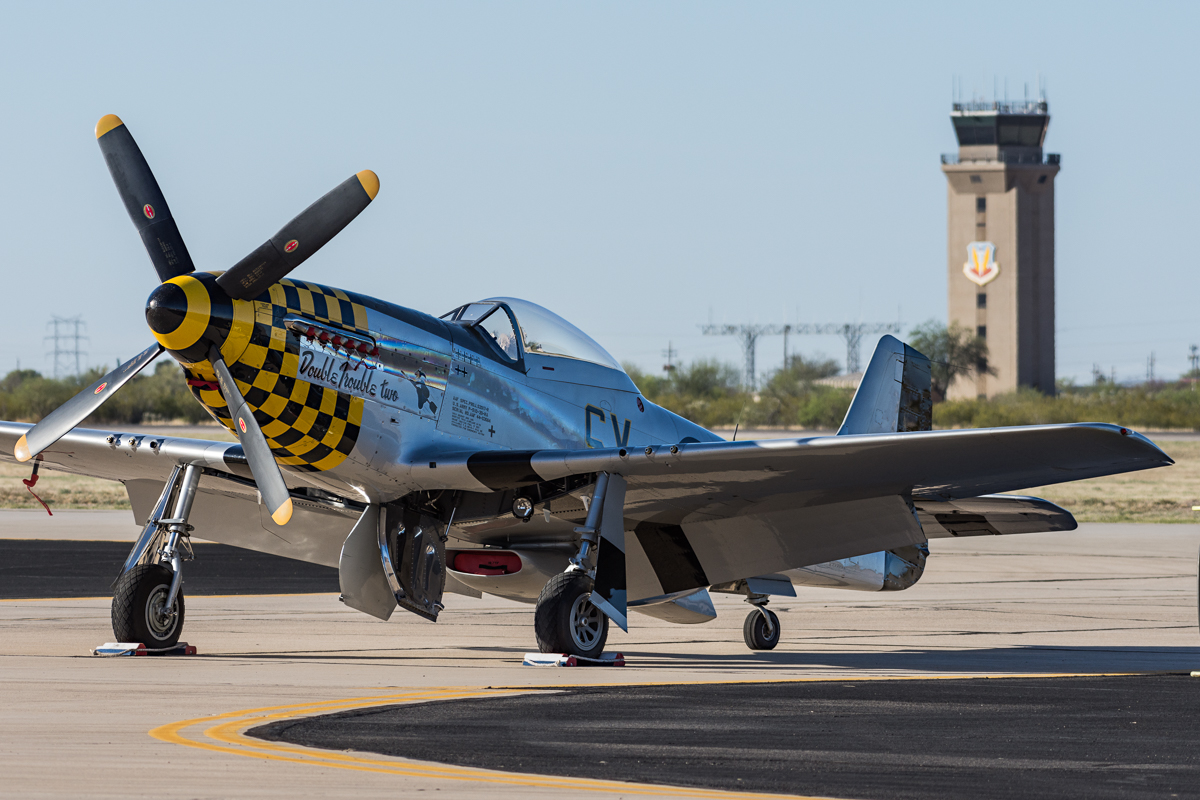 Today, in addition to being known as the host base for 309 AMARG, Davis-Monthan has been known for training world-class pilots on the Fairchild Republic A-10 Thunderbolt II “Warthog.” In a broader perspective, Davis-Monthan AFB today is synonymous with one of the most important roles in combat…Combat Search and Rescue (CSAR).

In an effort to show the local community what the base is all about, Davis-Monthan hosts a biennial open house entitled: Thunder and Lightning over Arizona. Thousands of people from Tucson area, around Arizona, even around the world, are invited on base to enjoy military and civilian aerial shows, static aircraft displays, a variety of food and drink options and other forms of entertainment. 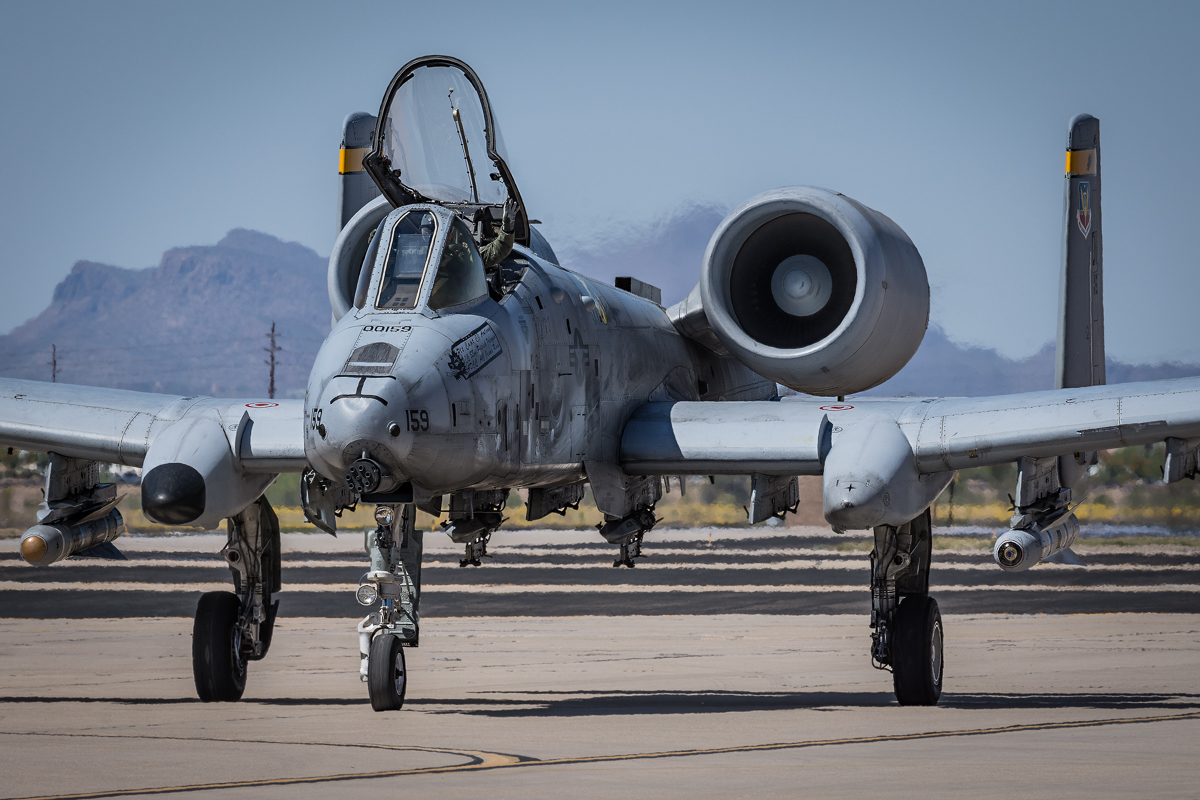 The Harrier is a marvel of British engineering. An airplane with the ability make a short takeoff and land vertically much like a helicopter.

Based on the Hawker-Siddley Kestrel designed in the late-50’s, the current Harrier flown by the USMC was a joint venture with McDonnell Douglas (now Boeing), British Aerospace (now BAE Systems) and Rolls-Royce.

Powered by a single Rolls Royce Pegasus F402-RR-406/408A turbofan engine that provides over 20,000 pounds of thrust, the Harrier is an attack aircraft that specializes in close air support (CAS). 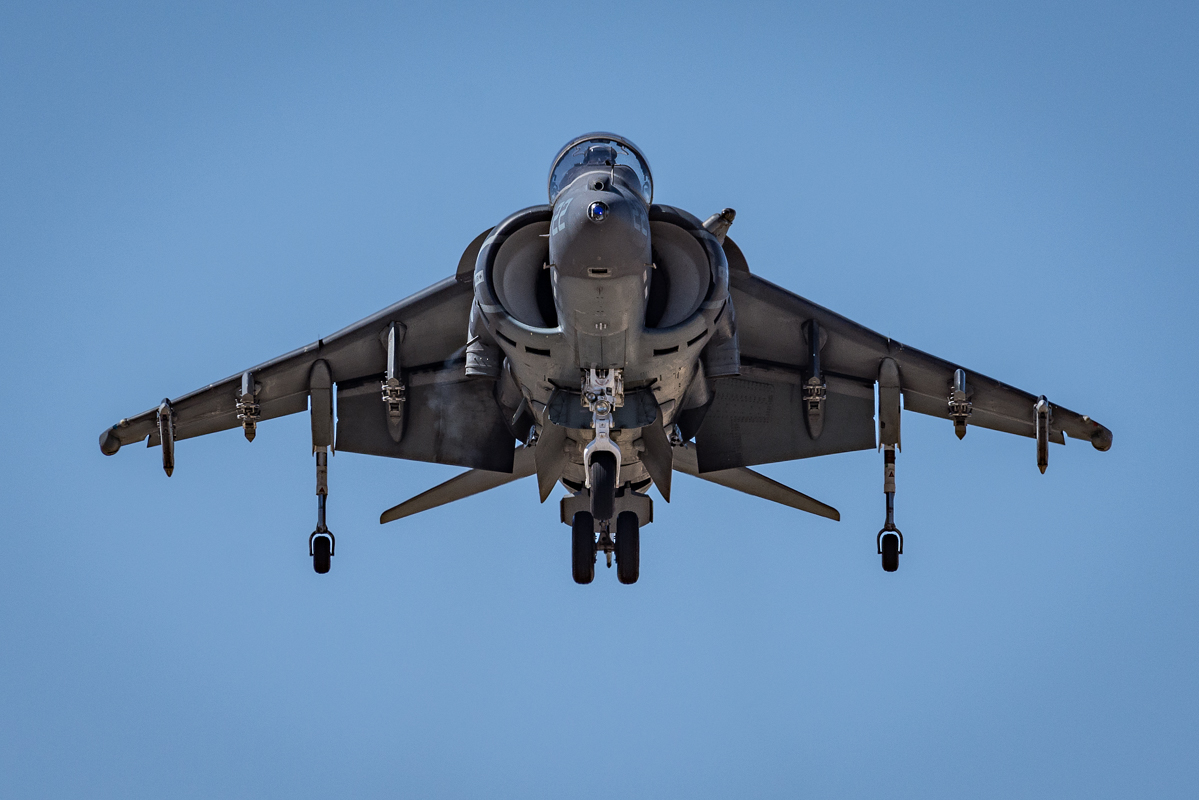 Production of the Harrier ended in 2003, but today’s version is a result of many upgrades since then. The USMC is beginning to replace the Harrier with the Lockheed Martin F-35B Lightning II.

The Harrier demo at Thunder & Lightning over Arizona 2016 showed the crowd some of the Harrier’s capabilities including its ability to hover like a helicopter, land vertically and utilize a short/vertical takeoff.

One of the more exciting aspects of military air shows is the “house demo,” the military demo that displays the specialty of the base. It makes sense that Davis-Monthan’s house demo would be the CSAR demo. 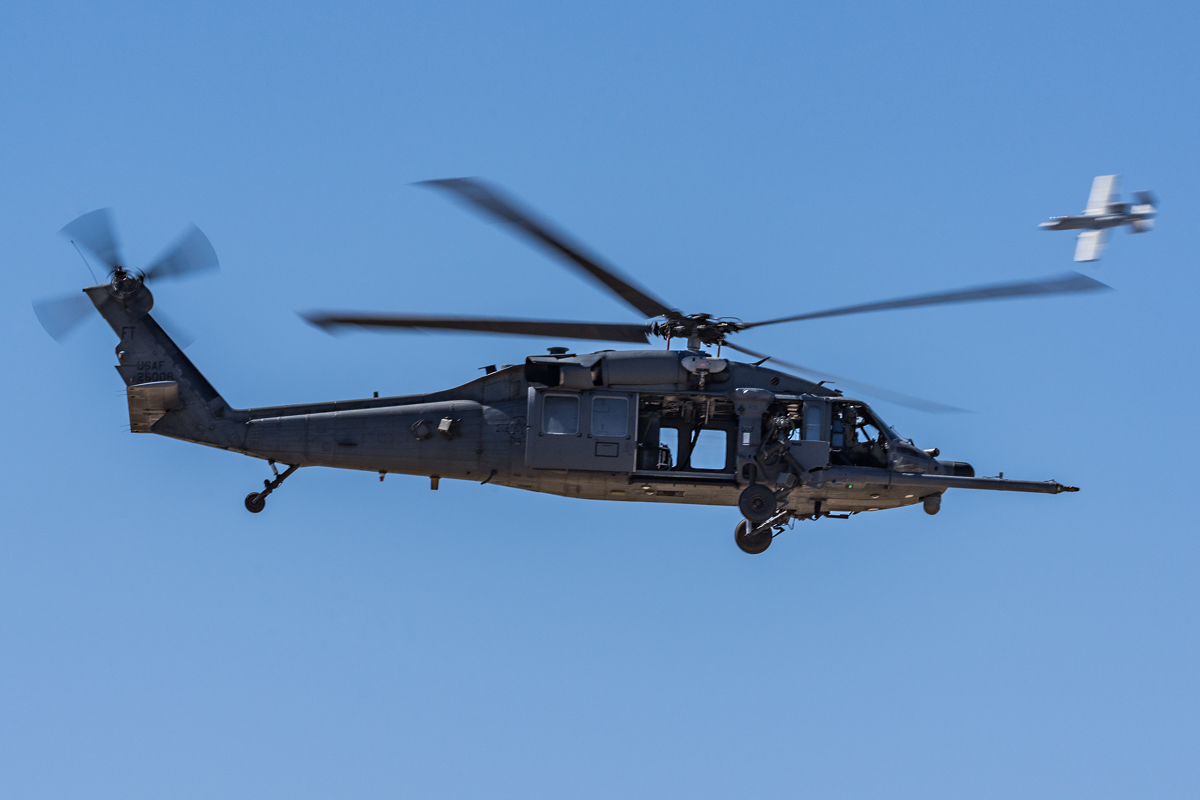 Using assets that are based at Davis-Monthan, the Lockheed Martin C-130J Combat King II, the Lockheed EC-130H Compass Call, the Sikorsky HH-60G Pave Hawk and the Fairchild Republic A-10 Thunderbolt II were utilized in a downed pilot scenario.

Complete with pyrotechnics and A-10’s strafing while providing close air support, the crowd was treated to a realistic simulation showing what happens during a rescue operation.

The F-22 Raptor demo is one of the most exciting aerial demonstrations that can be seen.

The F-22 is the USAF’s air superiority aircraft. The Raptor is a 5th generation fighter with the ability to point its nose, at will, at any adversary.

The F-22 package includes stealth, supercruise, state-of-the-art sensor capability, integrated avionics and advanced maneuverability. Simply put, there is no other fighter like it in the world. 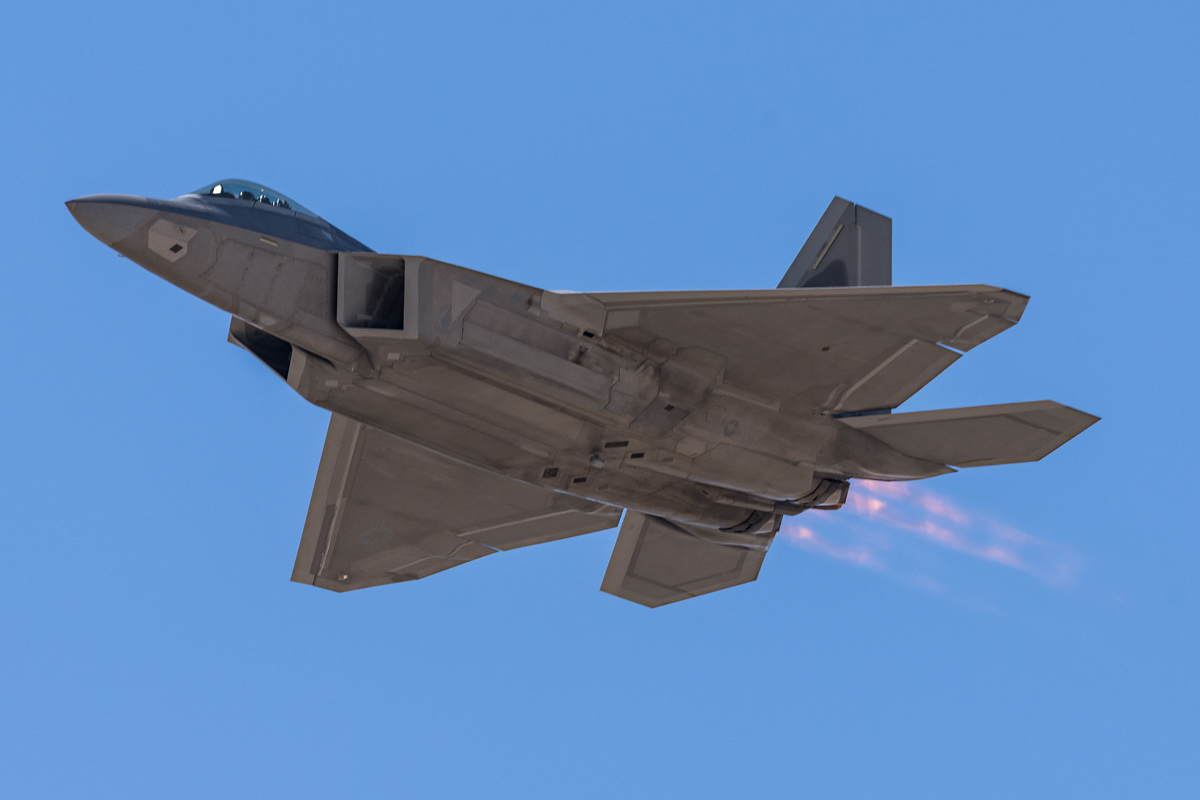 Taking over this year for the former F-22 demo pilot John “Taboo” Cummings is Maj Daniel “FFits” Dickinson who has been flying the F-22 since 2008. The F-22 Demo team is based at Joint Base Langley-Eustis (formerly Langley Air Force Base).

Maj Dickinson had this to say to Aviation Photography Digest about the F-22 Demo and Heritage Flight: “It’s an honor to get to bring the F-22’s into the Thunder and Lightning over Arizona air show. The chance to bring the Raptor, one of our premier stealth combat fighters, and also bring the P-51 Mustang to fly together with the Heritage Foundation is just a great chance to really inspire the next generation of airmen and a chance to give back to the public and interact with them as well.”

When asked about his favorite part of the demo, Maj Dickinson told us: “One of my favorite parts of the demo is the takeoff. You know…go running down the runway, air speeds kick in, afterburners lit, get the gear up in the well and I have a pretty high-G pull right at show center where I just start screaming up towards the sky. And that’s probably one of the best parts of the demonstration. We’ve got awesome music going at that time as well and it really is a great way to start off the show.”

As with most aerial demonstrations, safety is important with the F-22 demo. “Safety is paramount for us. So, first and foremost, I’m spending 94 percent of my time making sure I’m hitting all my minimum altitudes and air speeds. I do spend a decent amount of time looking outside, not at the crowd, but at all the different show markers. So, there’s corner markers I’m paying attention to. We’ve got different show lines that I’m flying on to make sure that we’re giving the most safe performance possible for the public,” Maj. Dickinson explained. 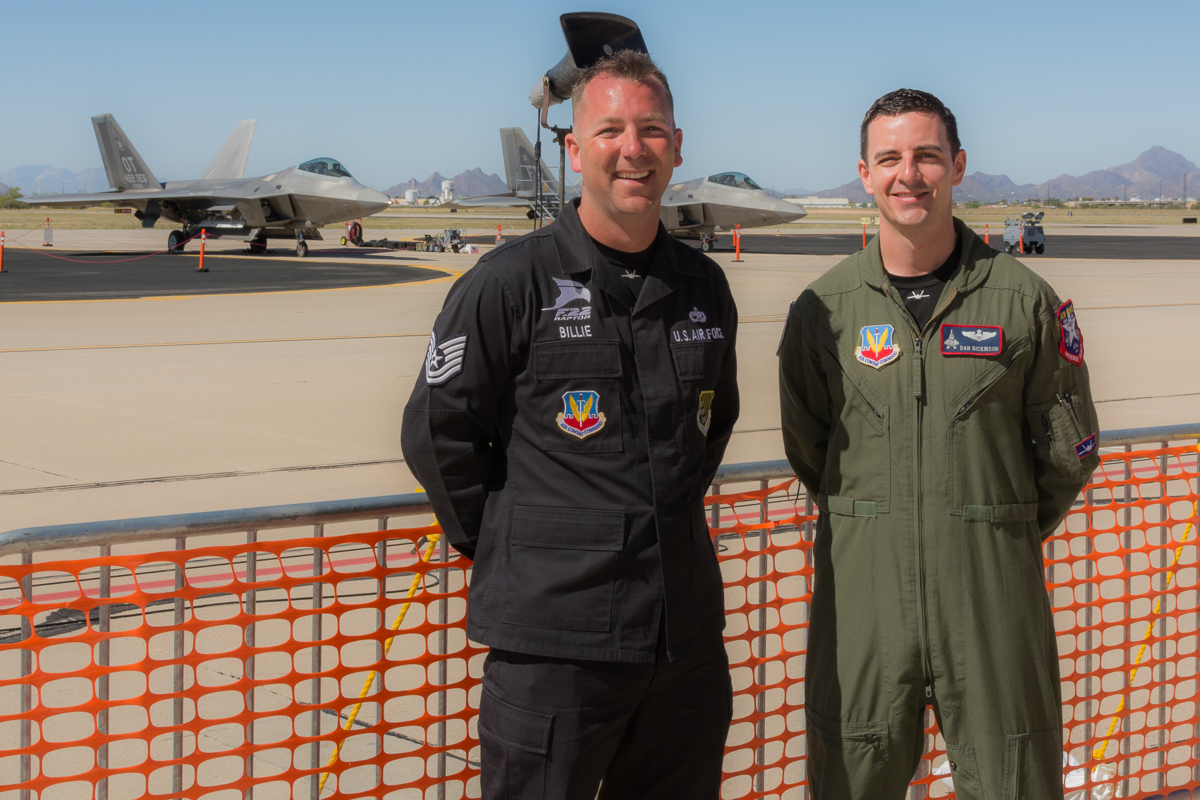 APD also had a chance to speak with Maintenance Team Chief TSgt Jonathan Billie and he had this to say about his important role with the F-22 Demo team: “I’ve got three main jobs. The first one, which is pretty important, is I will make sure that everything is taken care of, from lodging to cars, to making sure that the airplanes are there on-time prior to us getting to the air show site. Once we are at the air show site, I oversee all of the maintenance and make sure that everything is done safely so that Major Dickinson has a safe aircraft to take up for the show. And then , the most fun thing that we do is I’ll narrate and let the general public know exactly what Major Dickinson is doing up in the air.”

While many of the Raptor’s capabilities, such as its low observable, “stealth” capabilities cannot be displayed in a public showing, Maj Dickinson was able to show the crowd why the F-22 is the most capable fighter in the world.

The USAF Thunderbirds have been entertaining crowds since the days of them flying the Republic F-84 Thunderjet/Thunderstreak back in 1953.

Since 1983, “America’s Ambassadors in Blue” have been flying the General Dynamics F-16 Fighting Falcon, known by some as the Viper. However, they do fly “block 50” F-16s with the latest in avionics and a more powerful engine than the earlier F-16 models. 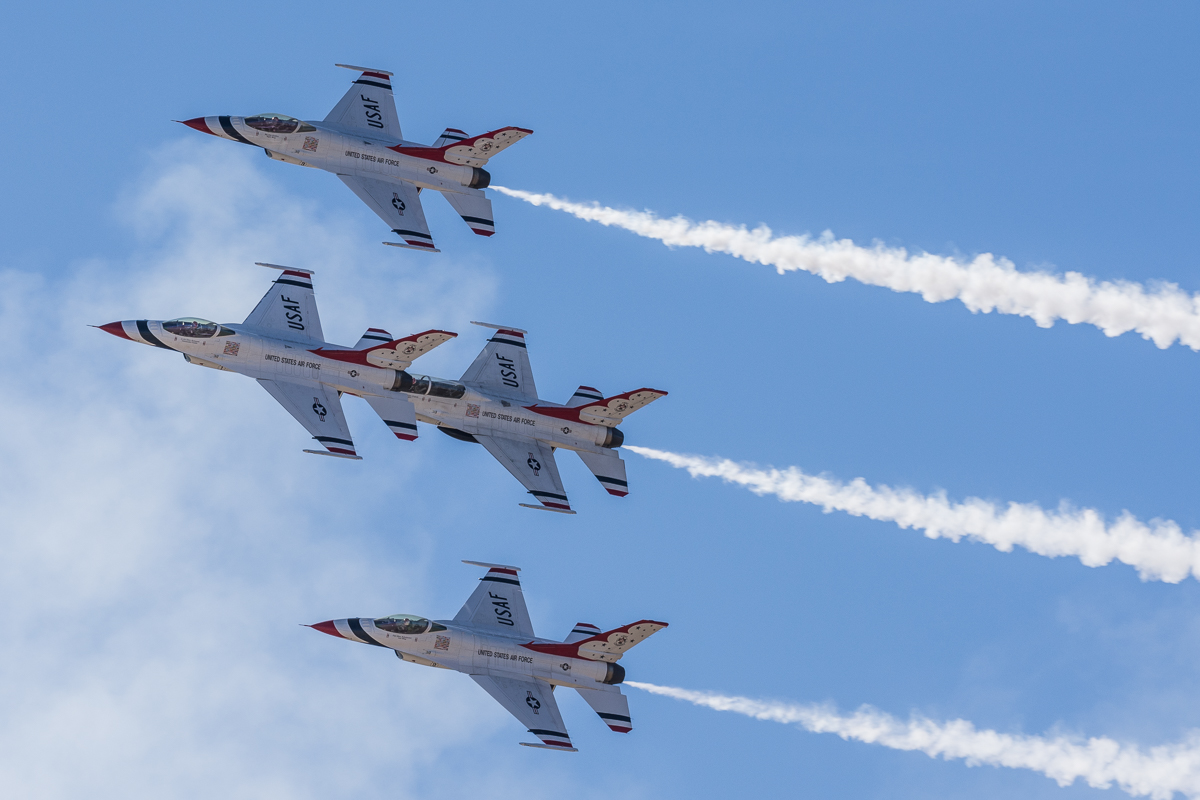 Based out of Nellis AFB in Nevada, the Thunderbirds have over 35 performances per year at air shows and open houses around the U.S..

While their performance at Thunder & Lightning over Arizona 2016 was limited due to an injury to one of the pilots, the USAF Thunderbirds showed off their signature maneuvers to the crowd.

The USAF Skydiving Team “Wings of Blue” 49 year history began as a parachute club and has evolved into having a primary mission to run the Air Force’s Basic Freefall Parachuting course, known as Airmanship 490 (AM-490). 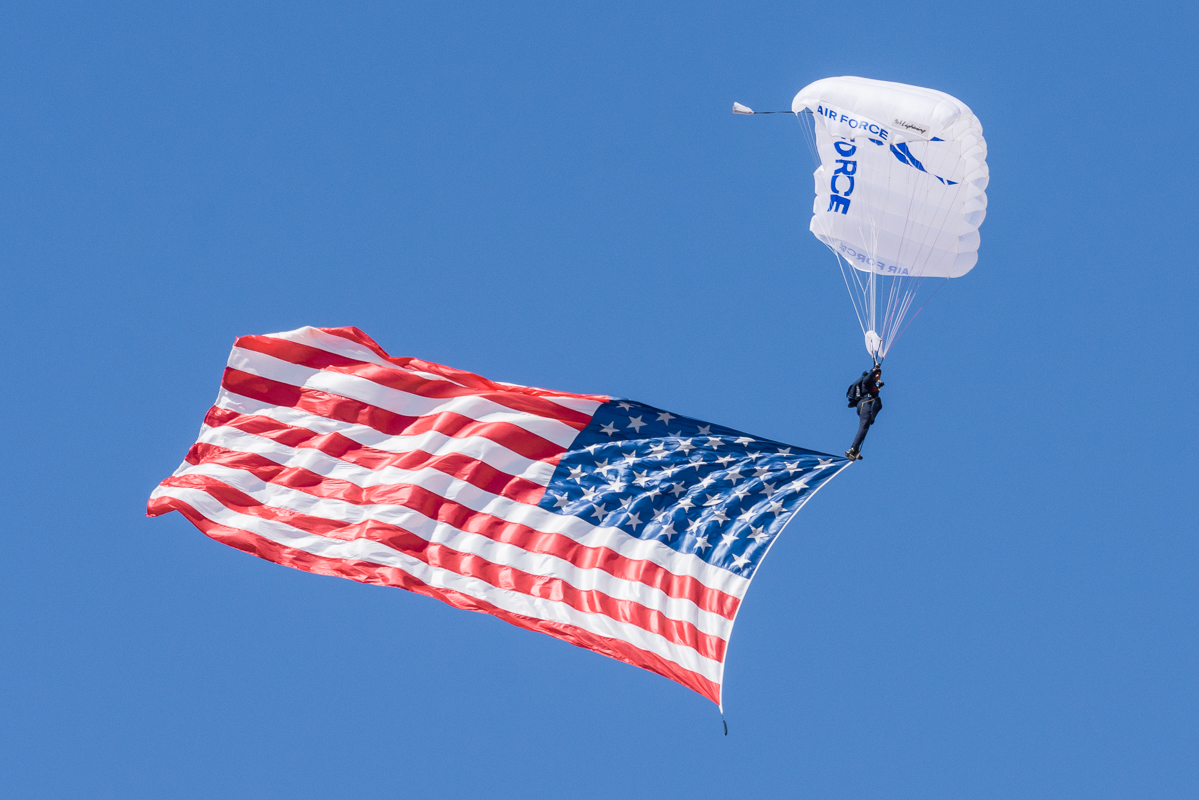 With both a demonstration team and a competition team, the Wings of Blue represent the USAF in precision parachuting.

At Thunder & Lightning over Arizona 2016, Wings of Blue performed several jumps throughout the show to help keep the audience engaged.

Thunder & Lightning over Arizona 2016 contain several non-military performances which added a nice balance to the lineup.

Another “house demo” that took place, but was not military-related, was the U.S. Customs and Border Protection Demo. 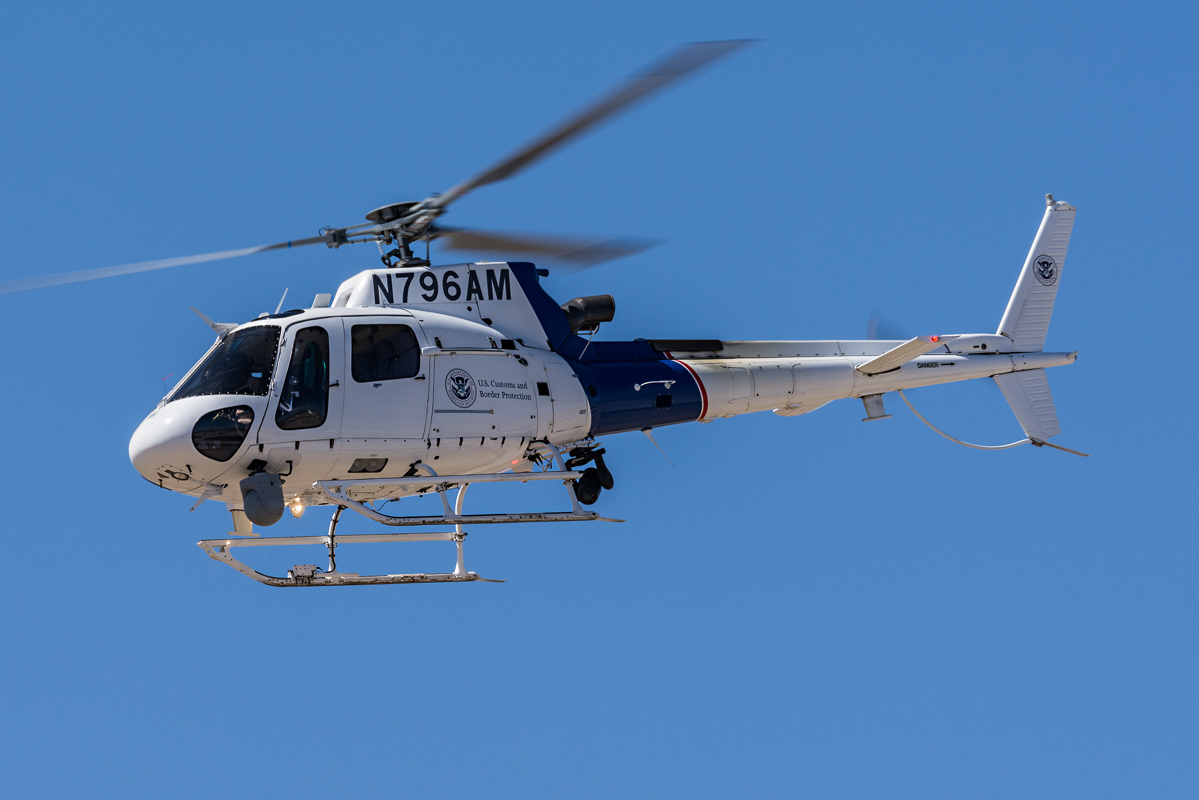 Davis-Monthan AFB is home to the largest air operations program within the U.S. Customs and Border Protection’s Office of Air and Marine. Operating several helicopters and light fixed-wing aircraft, the U.S. C/BP OAM flies almost 20% of its total flight hours out of Davis-Monthan.

The C/BP demo at Thunder & Lightning over Arizona 2016 showed attendees how a combination of ground vehicles and air assets are used to apprehend suspects. 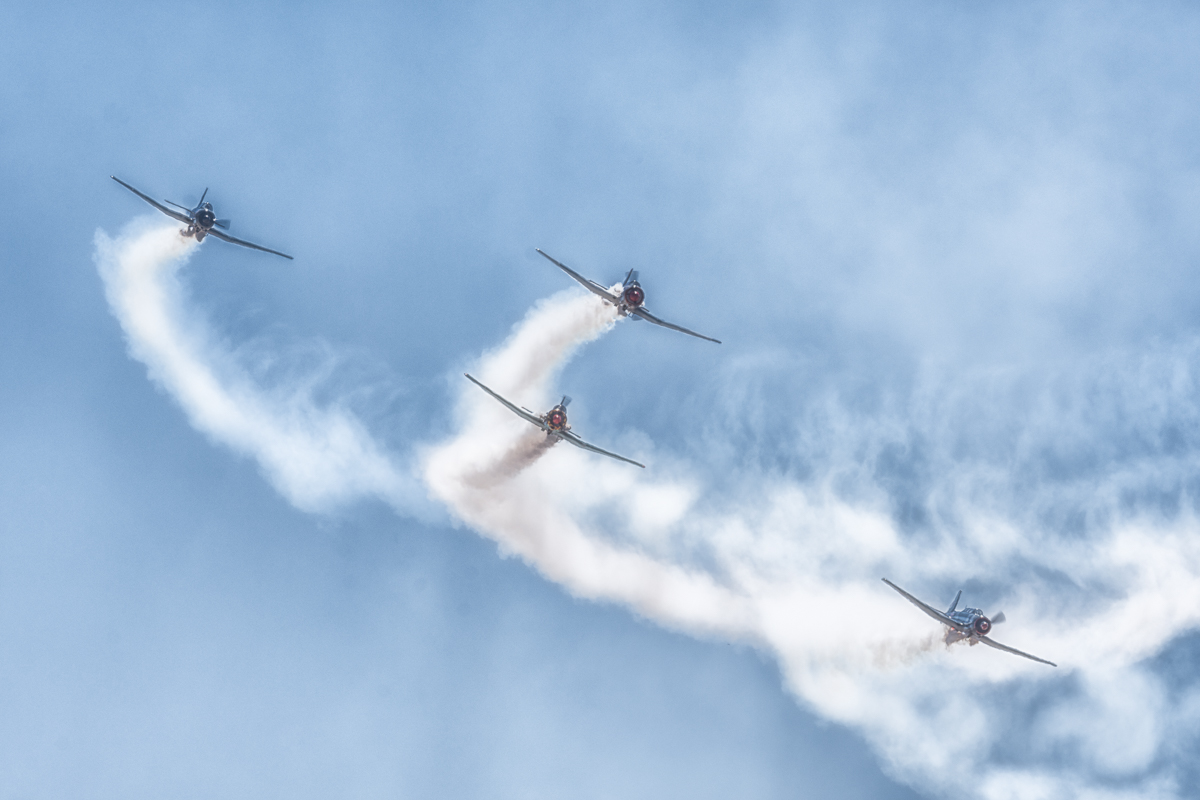 Other performances included Bill Braack’s Smoke-N-Thunder Jet Car, Kent Pietsch and his Jelly Belly aircraft, Rifle Shetterly and his Van’s RV-8, the Desert Rats Warbird Demonstration Team, Jacquie B Airshow’s Jacquie Ward in her EXTRA 300. All of which kept the audience entertained throughout the open house.

Being the headquarters of the Twelfth Air Force and being in the aviation-friendly state of Arizona has its perks. Close proximately to Pima Air & Space Museum (across the street) and being the gatekeeper to the “Boneyard” helped provide some interesting static aircraft displays. Davis-Monthan was also able to put an impressive lineup together for its open house, both with aerial performers and displays of aircraft active in the USAF.

The planners of Thunder & Lightning over Arizona 2016 did an outstanding job putting together a true representation of American airpower today while providing entertainment for the thousands of attendees. The only complaint is that one has to wait two years for the next one.