The Yellow Peril; 75 Years in Canada and the Harvard is still roaring!

Home » Articles » Aircraft » The Yellow Peril; 75 Years in Canada and the Harvard is still roaring!

The Yellow Peril; 75 Years in Canada and the Harvard is still roaring!

During World War II, and for some years afterwards, the aircraft jokingly referred to as “a bunch of parts flying together in a very tight formation,” earned its reputation as one of the most successful and outstanding trainers in the annals of flying.

This single-engine, advanced trainer was designed and produced in the US by North American Aviation in the 1930’s and designated as the AT-6 Texan.  It was best known outside the US as the Harvard and has probably 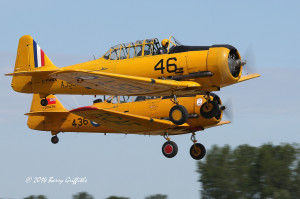 trained more pilots than any other aircraft.

In 1939, at the outbreak of WW II, Canada made its first purchase of the Harvard Mk I and was immediately faced with the problem of getting the aircraft from the US to Canadian air bases without compromising the USA’s position of neutrality.  The issue was resolved when the Harvards were flown from the North American Aviation factory to a number of international border crossing points. On arrival, they were pushed or towed over the border where they were received by RCAF officers and then flown to their bases in various parts of Canada.

In January 1940, Noordyn of Montreal started to build the Harvard Mk IIB version under licence in Canada for the RCAF, RAF and USAAF.  It was a very successful operation and by the end of hostilities, the company had produced a total of 2557 Harvards for the war effort.

The Harvard, with its distinctive yellow paint, quickly achieved its reputation as a versatile, robust training aircraft when it was selected as the advanced single-engine trainer for the British Commonwealth Air Training Plan (BCATP).

The flight training program began with 50 hours of initial flight instruction on primary trainers such as the Tiger Moth, Fleet Finch and Cornell. On successfully completing this program, the graduates of the “learn-to-fly” program were then transferred to an advanced training squadron in one of the fifteen Service Flight Training Schools across Canada.  It was here that they were introduced to their next trainer, the Harvard, in which they continued to hone their flying skills and make the challenging transition from low-powered primary trainers to high performance front line fighters. 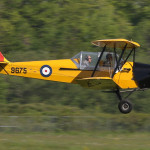 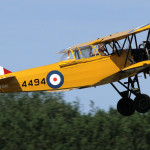 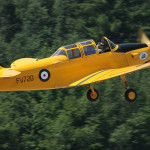 The flight training program for embryo fighter pilots began with initial instruction on these primary trainers,

The Harvard was fully aerobatic, pleasant to fly and eminently suited to its BCATP advanced training role of preparing pilots to operate the thoroughbred Spitfires, Hurricanes and Mustangs fighters.  In addition, one of its very important strengths lay in the fact that it had enough bad habits to teach inexperienced pilots to respect the even more powerful fighters they would soon be flying. They quickly found out that the Harvard required a delicate touch to maintain the proper attitude upon take-off and landing and also had an undeniably tendency, caused by the tail wheel and high centre of gravity, to ground-loop. Although modifications were made, it still needed careful handling to avoid this problem. With these performance and handling characteristics firmly embedded in the Harvard’s DNA, it is easy to understand why many pilots fondly recall it as “Pilot Maker” and others “The Yellow Peril”.

The Harvard required a delicate touch to maintain proper attitude on take-off and landings. 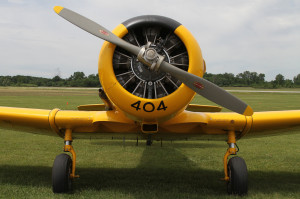 With the distinctive snarl from its 600 horsepower Pratt & Whitney engine, together with its nine foot propeller which, when in fine pitch at high rpm, approached sonic speeds, the Harvard was a familiar sight in Canadian skies.

The BCATP was the most ambitious flight training program in Canadian history and, in late 1944, as the tide turned in favor of the allies, the BCATP was gradually phased out and closed down completely in 1945.  During its period of operation through the war years more than 11,000 Canadians and 8,000 from allied countries received their pilot training on the Harvard aircraft in Canada.

At the end of WW II, after being placed in long term storage on abandoned airfields across Canada, most of the Harvards in the RCAF inventory were sold off to civilian operators, although the RCAF did retain a limited number of them as an advanced trainer. By 1949 the Cold War with the Soviet Union was in full swing and this post war decision proved costly for the RCAF.  In order to fulfill its NATO responsibilities  it urgently needed large numbers of advanced trainers to train Canadian and other NATO pilots who would go on to fly F-86 Sabres and CF-100 Canucks in the defence of Europe and North America.

As a result, 100 T-6J Texans were leased temporarily from the USAF and a further 270 Harvards, the Mk. IV version, were ordered from Canadian Car & Foundry in Thunder Bay, Ontario.  The Harvard Mk IV remained the workhorse of the RCAF and NATO pilot training programs with more than 6000 Canadian and NATO student pilots being trained on it before they were finally retired in 1966 and sold by Crown Assets into civilian hands.  Today, 48 Harvard 2 and Harvard 4 aircraft are listed in the Canadian Civil Aircraft Registry as privately owned and remain in airworthy condition. Many others are flying in the US and are a reminder of the importance of simplicity in training and function.

The Canadian Harvard Aircraft Association (CHAA) recently celebrated the 75th Anniversary of the Harvard at their home base in Tillsonburg, Ontario by inviting the public and veterans to participate in a weekend of celebrations.  The many veterans who instructed, flew, maintained or were somehow connected with this icon of Canadian aviation turned out to be honoured with backseat flights in one of the six Harvards flown by the CHAA, an exhibition by the Harvard Formation Team, a mass fly-past of Harvards and featured guest speaker Lieutenant-General DeQuetteville, Commander, Canada Air Command (Retired).

In chatting with CHAA President Pat Hanna and PA Chair Terry Scott, it was clear that the 75th Anniversary of the Harvard in Canadian skies is only the beginning and that the 600 members worldwide of the CHAA are fully focused on the notion of celebrating the 100th Anniversary the Harvard in Canada. They noted that the organization has a good inventory of parts, and since it’s a common aircraft there is an ample supply of parts North America-wide to keep their Harvards in the air for decades to come.

It is unimaginable that the Harvard, which has had such a monumental influence on Canadian aviation and is now so endowed with the enthusiasm and dedication of private owners and volunteer organizations like the CHAA, would not be around to excite the imagination, stir the heart, and mark its next gigantic milestone ….. 100 years in Canada and still roaring!