The Return of the RCAF

The Royal Canadian Air Force (RCAF) is a relatively small while an extremely potent force. Despite its relatively calm surroundings, the RCAF is not new to the European Theatre of operations, as an active NATO member, the RCAF deploys frequently to the continent. A contingent of RCAF CF-188 Hornets have deployed as part of NATO’s Air Policing Mission to Lithuania, Iceland and Romania in recent years. Its last deployment coming just last October to Romania. The RCAF’s last Air Policing Mission, was its last prior to the Russian invasion of Ukraine, the deployment concluded on the cusp of the Russian invasion.

While RCAF Personnel might have been expecting their usual Eastern European routine last October, by now with tensions in Eastern Europe have gone far beyond their boiling point, the RCAF is deploying to a new environment that is much more guarded than before.

The RCAF’s frontline fighter contingent deployed is based on the F/A-18A/B Hornet, known locally as the CF-188 Hornet. The aircraft deployed are from a mix of 3 Wing/Canadian Forces Base (CFB) Bagotville’s two CF-188 Squadrons (425 and 433 Tactical Fighter Squadrons).

While sometimes less noticeable – but equally as important, is the RCAF’s Transport Squadron, 437 Transport Squadron, also known as the “Husky Squadron”. The RCAF’s “Husky Squadron” operates five CC-150 Polaris Aircraft, with two of the aircraft converted to “T” Models, for Air-to-Air refueling (AAR) operations. The Polaris is based on Airbus’s A310-300 and is an ex-airliner. These aircraft are based out of 8 Wing/CFB Trenton.

The RCAF as a rule of thumb, bases its aircraft movement on homegrown Tanker support. So whenever a directive is issued for RCAF CF-188s to be deployed across the Globe, there is almost certainly a “Husky” Polaris contingent in a key role supporting the mission. “Husky” has supported all past missions to the NATO Alliance, piggy backing Hornets to Iceland, Lithuania and Romania.

The Polaris, uses the drogue system to refuel its Hornet counterparts, in something of an upgrade from the KC-130, it has cameras on the fuselage to provide the refueler with better situational awareness.

In addition to its crew of two pilots and refueler the Polaris also has a Loadmaster in charge of cargo. In many cases that the aircraft deploys abroad RCAF contracted maintenance will also join the mission.

During the middle of August 2022, the 437 Transport Squadron once again deployed to Romania pulling along a contingent of CF-188s slated for Enhanced Air Policing, under Operation REASSURANCE, to supplement the RoMAF defense of Europe’s South East flank. The CF-188s headed for the familiar Mihail Kogălniceanu Airbase along the shores of the Black Sea where they were stationed in the previous deployment, while the sole Polaris aircraft which dragged them over was stationed at Bucharest-Otopeni International Airport’s Military side – also known as the 90th Airlift Base.

During the recent “Husky” deployment to Romania there were several added elements. In addition to supporting the EAP (Enhanced Air Policing) role, the 437 Transport Squadron participated in Exercise THRACIAN VIPER, supporting the RCAF contingent alongside the Romanian, Bulgarian and Greek Air Forces. The Exercise is meant to enhance interoperability between the forces with an emphasis on the Air Policing mission as well as Air to Ground missions.

The 437 Transport Squadron conducted one AAR mission per day during the 2 weeks it was deployed. The everyday mission tempo with a small contingent on hand allowed for a compact and intense syllabus for the crews involved.

In addition to supporting the RCAF CF-188s, the 437 Transport Squadron had an internal mission objective. On the deploying crew’s checklist was to get a “Husky” pilot’s status upgraded from Aircraft Commander, to certified as a CC-150 Tanker Commander. In order for this pilot to get his upgrade, there was a need for the 437 Transport Squadron to deploy with several IPs (Instruction Pilots), These IPs provided training and guidance for the new candidate. The Tanker Commander upgrade process has a standard timeline, so when the candidate reaches a certain amount of hours as a “Standard Tanker Pilot”, he is saturated with type specific missions alongside an instructor pilot to provide him guidance on how to address those missions as a Tanker Commander. The 437 Transport Squadron operates a cadre of IP’s meant for exactly this situation and this upgrade is done “in house”.

On August 25th the “Husky” contingent concluded its operational and training mission successfully and returned via Prestwick to its home base in Trenton. 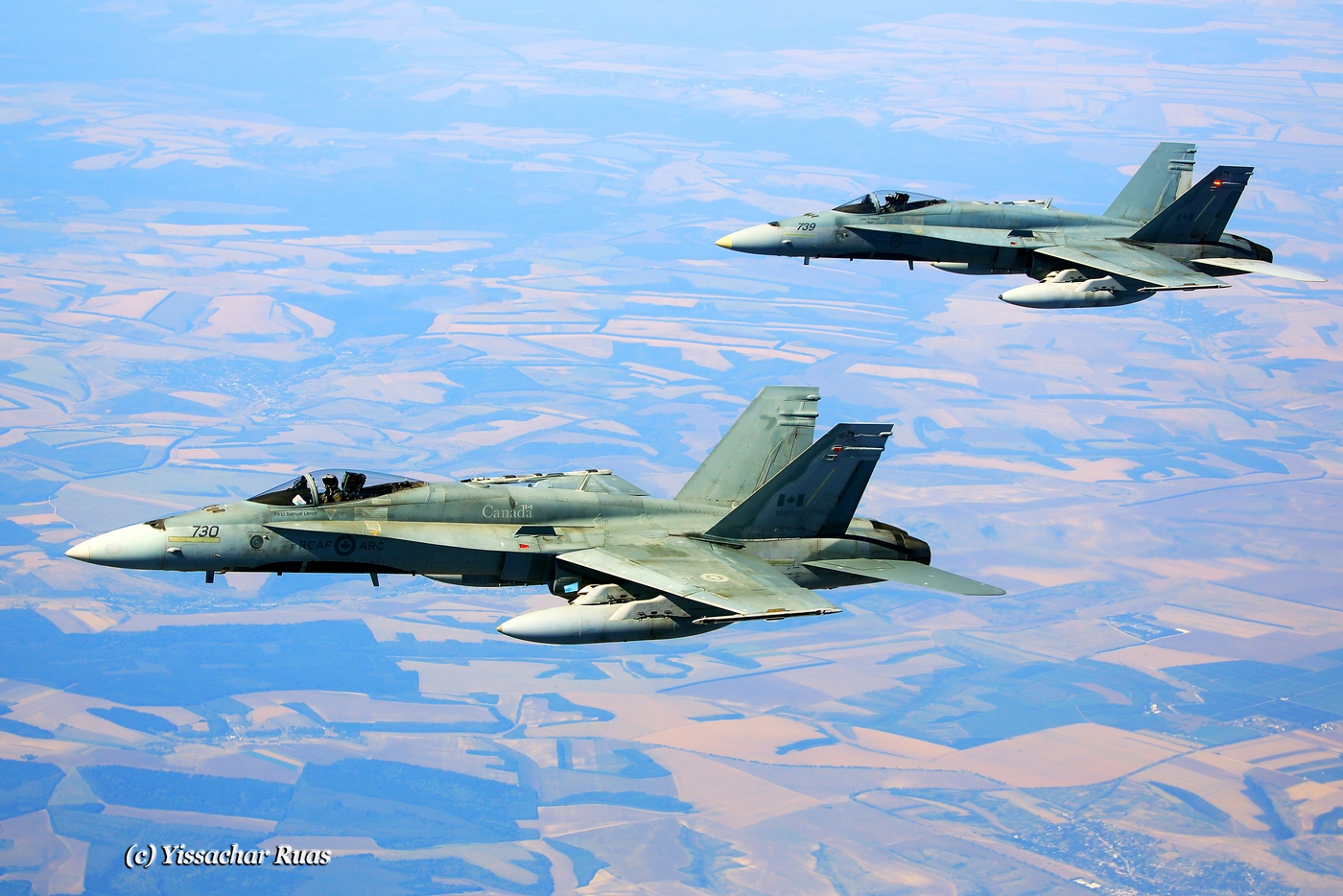 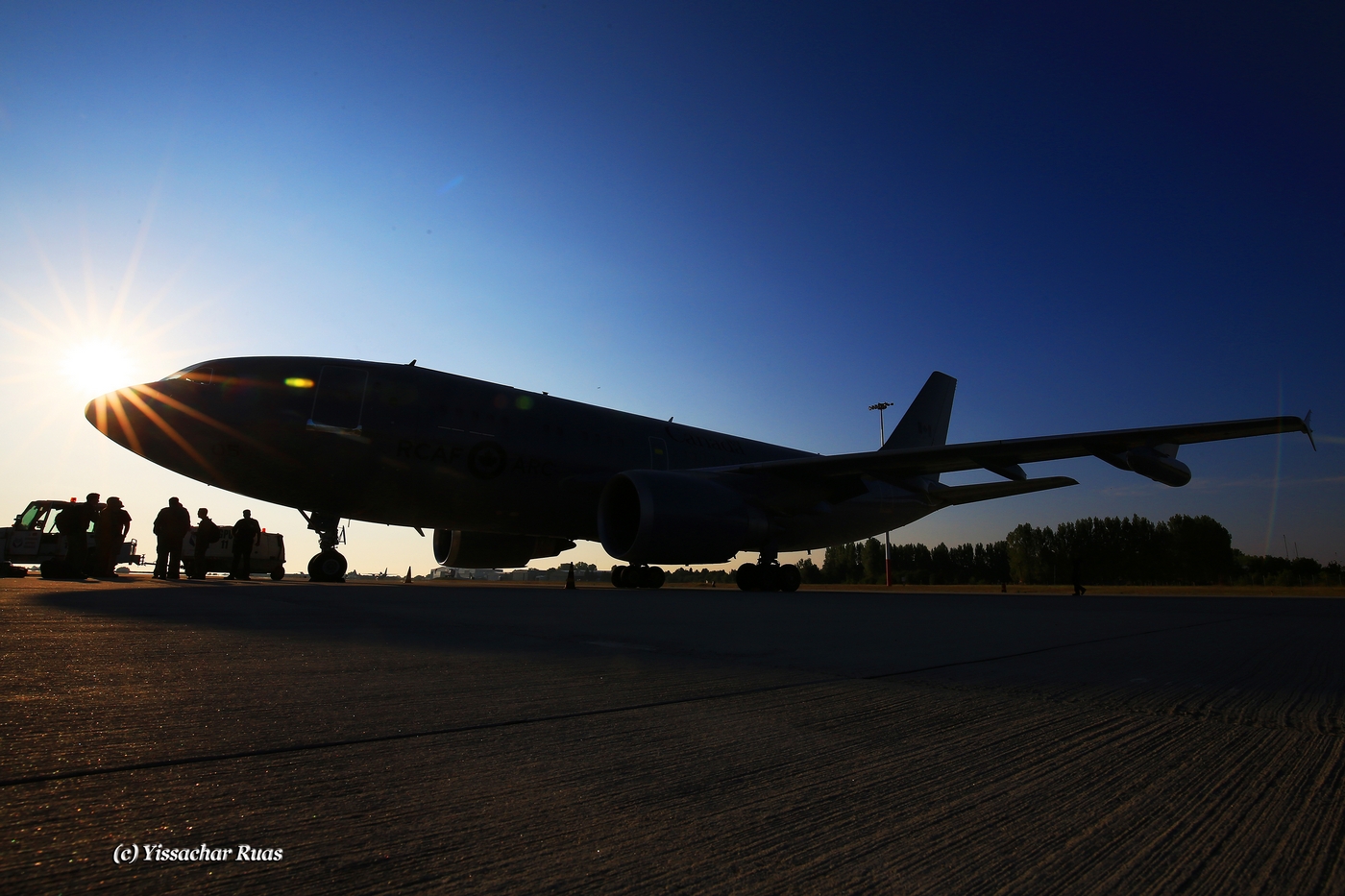 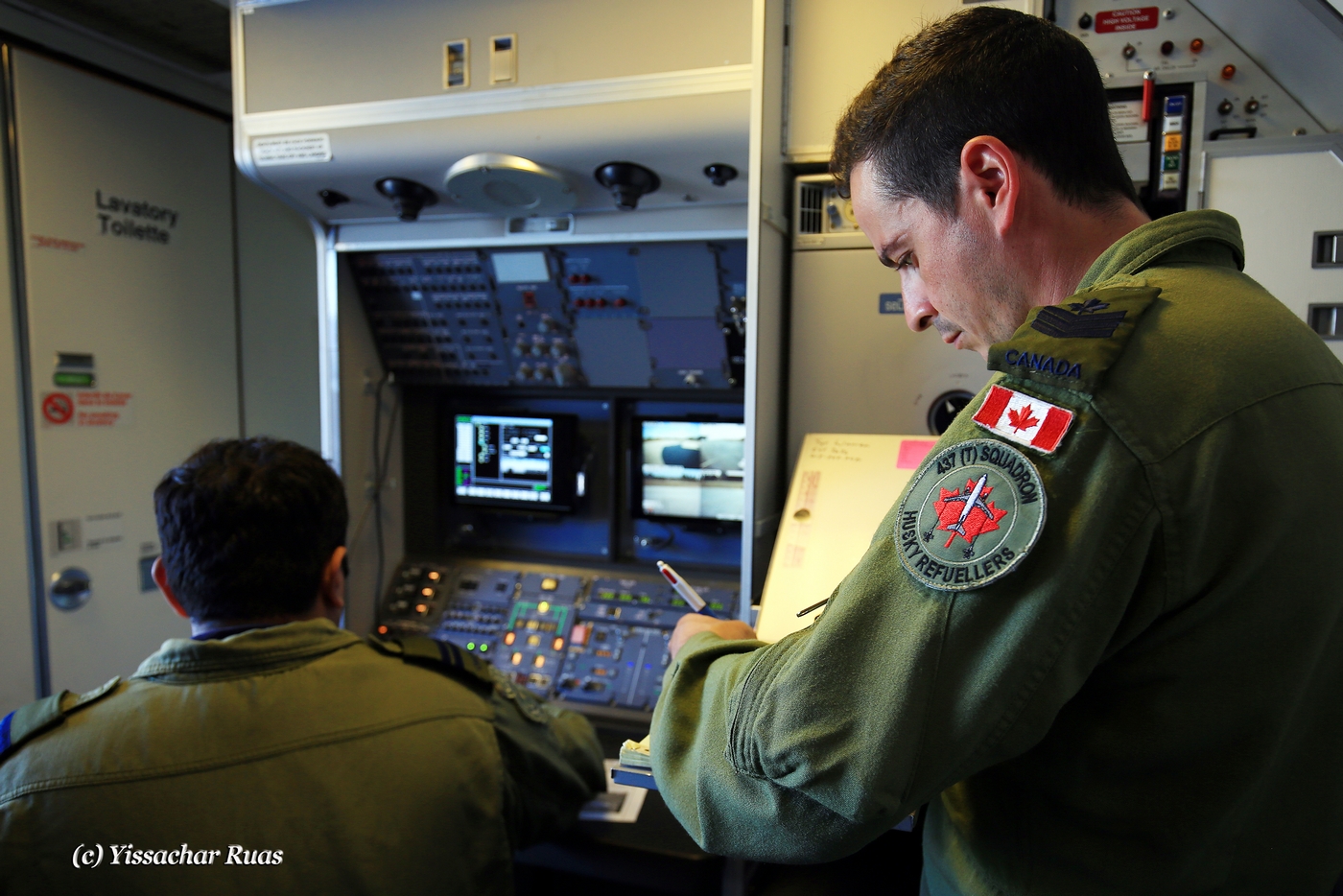 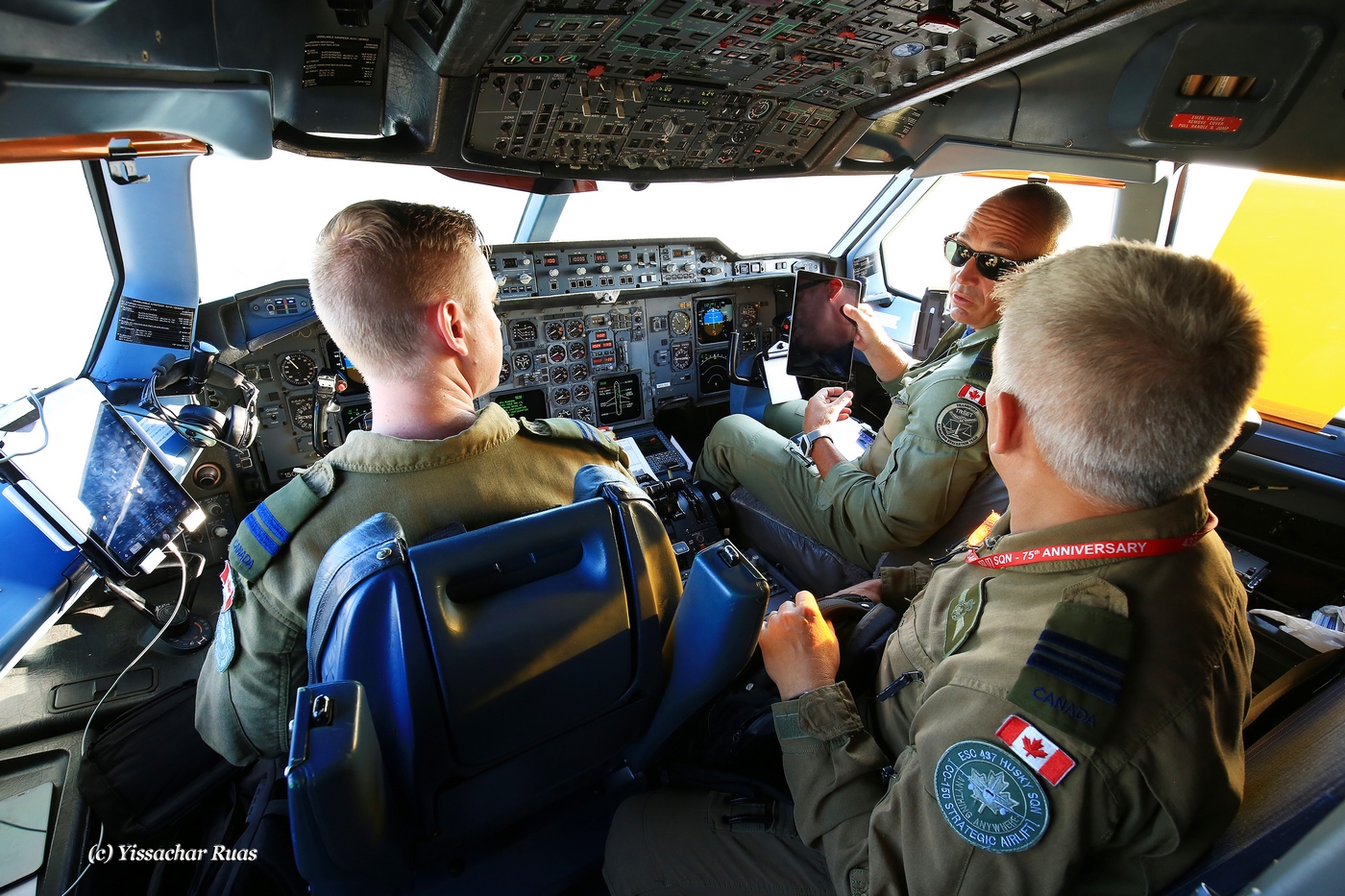 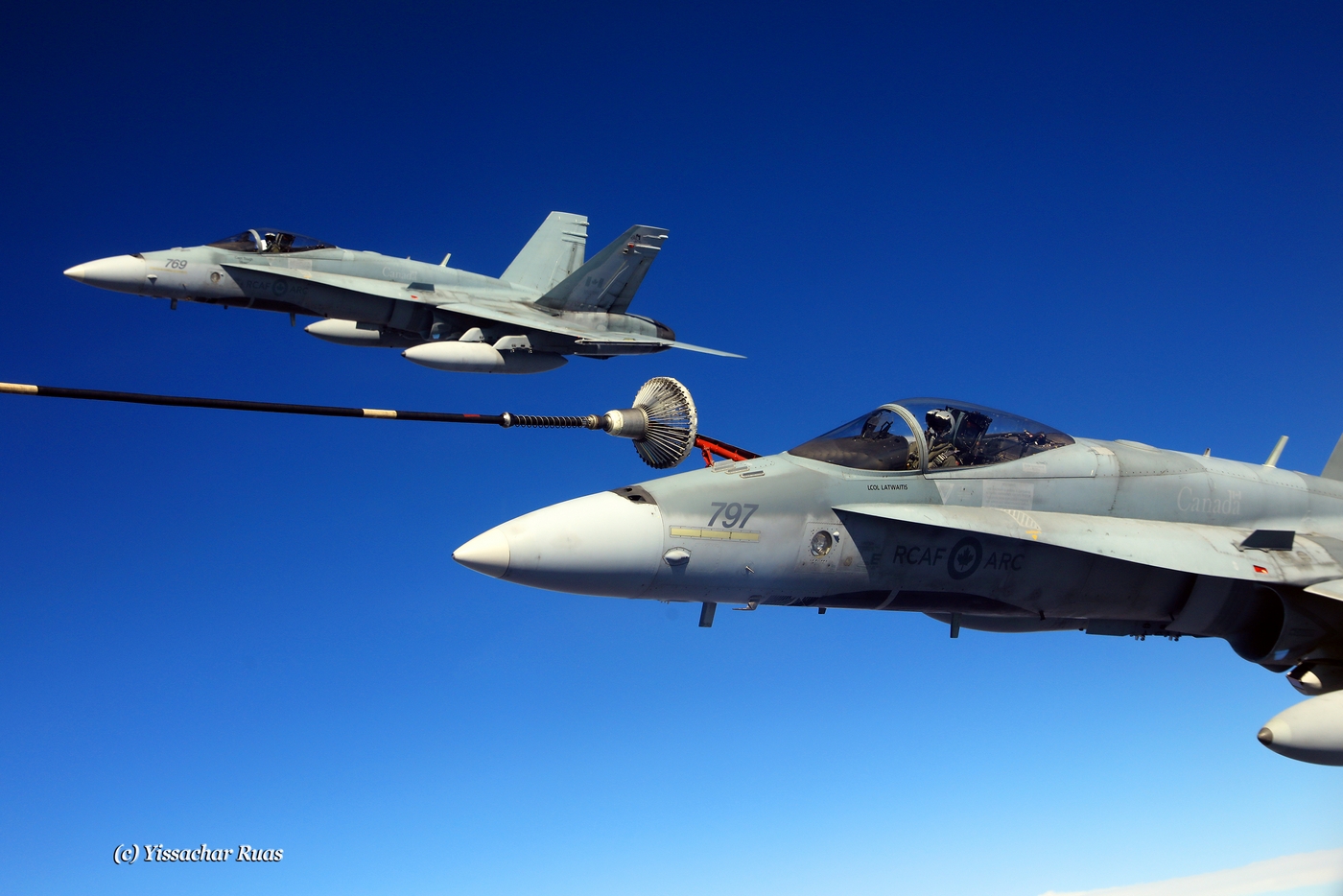 https://www.facebook.com/yruasphoto
Send this to a friend
SUBSCRIBE TO OUR NEWSLETTER
All rights reserved © Aviation Photography Digest, 2023
Subscribe to our FREE newsletter and get notified when new articles are published.
Subscribe
×