After World War I, the need for mass transportation was recognized by Henry Ford. Henry Ford and his son Edsel decided to invest in the Stout Metal Airplane Company and it’s engineer, William Bushnell Stout. Stout designed several aircraft emulating the design principles of Hugo Junkers, a German engineer and aircraft designer. Originally what was a single-engine design, became a multi-engine design. The final result was an aircraft with design cues similar to the Fokker F.VII/F.10 Trimotor and the Junkers G 24 Trimotor. In 1925, the Ford Trimotor was born. 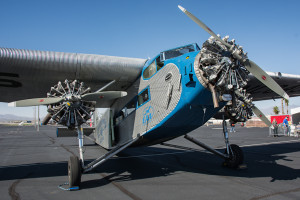 The “Tin Goose”, a corrugated alloy “all metal” aircraft

With it’s all-metal construction, Henry Ford claimed to have built the safest airliner around. Although it reduced performance and added weight, the metal alloy used to construct the aircraft wascorrugated for added stiffness and strength. According to Cody Welch, a retired Boeing 757 pilot who has been piloting the Ford Trimotor for 23 years, the corrugation: “gives it strength, the airplane is incredibly strong, it’s overbuilt”. Realizing he had to develop confidence in commercial flight from the public, Ford decided to build on the strength of an all-metal aircraft.

Another factor that would help convince people that the aircraft was reliable was the number of engines. After World War I, people noted that aircraft engines were unreliable. For consumer confidence to improve in airline transportation, people had to feel that the airplane was also mechanically safe. As Cody Welch stated: “you had to convince people it was reliable and get by that “engine out” perception, so the third engine is there just purely to please the general public”.

Since, in the 1920’s, runways were not developed yet throughout the U.S.. Any aircraft designed for commercial use had to be able to take off from short grass runways. The Ford Trimotor was also designed with this in mind. “So we have an airplane that can carry a lot of weight, it’s extremely reliable, made out of metal, three engines, and can take-off and land on these short fields. That’s how Ford birthed an industry. So all the great airlines started with a Ford”, says Welch.

Founded in 1953 by Paul H. Poberezny, the Experimental Aircraft Association (EAA) began with a focus on home-built and experimental aircraft. Today, EAA has expanded it’s mission in aviation to include antiques, classics, warbirds, aerobatic aircraft, ultralights, helicopters, and contemporary manufactured aircraft. EAA is headquartered in Oshkosh, Wisconsin, as a non-profit 501(c)(3) corporation that includes over 180,000 members in more than 100 countries.

EAA is responsible for programs such as Young Eagles, which has introducing aviation to over 1.8 million youths of between the ages of 8 and 17 years old since 1992. The Young Eagles program was able to provide a first flight experience, through EAA’s network of volunteer pilots, to many youths. The program has helped jump-start many aviation careers. The Young Eagles program continues today in many locations throughout the U.S..

EAA is also host to the annual EAA AirVenture Oshkosh which is the largest air show in the world. Commonly known as the Oshkosh Airshow, or simply, “Oshkosh”, 12,000-15,000 aircraft visit Oshkosh every year with an average attendance of over 500,000 visitors.

EAA currently operates two Ford Trimotor aircraft with the purpose of showing the public 1920’s luxury and reliability in aviation. The first, a 1929 Ford Trimotor 4-AT-E (NC8407), was purchased by EAA in 1973, after being damaged in a windstorm, and was restored to airworthy condition from 1973-1985. This aircraft has it’s original Eastern Air Transport (which later became Eastern Airlines) markings. This was the airplane that started Eastern Airlines. EAA expects over 9000 passengers to fly on this aircraft in 2015 with an additional 70,000 to 80,000 to view it. The history of this aircraft is as follows: 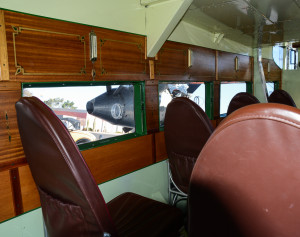 With it’s partial wood-lined interior, comfortable seating, and large “picture” windows, flying in the Trimotor was the equivalent of first-class travel today

The second EAA-operated Ford Trimotor is Liberty Aviation Museum’s 1928 Ford Tri-Motor 5-AT-B (NC9645), which was acquired by was acquired by Ed Patrick and the Liberty Aviation Museum in Port Clinton, Ohio in 2014. After making sure the aircraft was fully-airworthy, EAA entered into a lease agreement with Liberty to showcase the aircraft around the U.S..

According to Cody Welch, several modifications had to be made to these antique aircraft in order to make them airworthy in modern times. These modifications include:

With a partial wood interior, comfortable seating, and large “picture” windows, flying in the Ford Trimotor in the 1920’s is the equivalent to first-class travel today.

Both EAA-operated Ford Trimotor aircraft are currently touring the U.S.. For $75 ($70 if booked in advance) an adult ($50 for children) can take a trip back in time and experience what passenger flight was back in the 1920’s. The full EAA Ford Trimotor tour schedule is located HERE.

I would like to send out a special “thank you” to Olivia Rasmus, EAA Air Tours Program Coordinator, for the invitation to fly on this wonderful aircraft and to pilot Cody Welch for his informative interview and excellent piloting in 26 MPH wind gusts in Tucson, AZ. The Ford Trimotor certainly stayed true to it’s durability and reliability…it was a great experience.