The F-22 Raptor Demo : A Demonstration of Air Superiority

The F-22 Raptor Demo : A Demonstration of Air Superiority

The 2015 Heritage Flight Training and Certification Course was recently hosted by Davis-Monthan Air Force Base in Tucson, Arizona. From February 26 through March 1, current F-16 and F-22 demonstration pilots trained with pilots of classic warbirds on formation flying for the upcoming air show season. This year’s training included classic aircraft such as the P-51 Mustang, the P-40 Warhawk, the P-38 Lightning, P-47 Thunderbolt and the F-86 Sabre, flying along-side modern aircraft such as the F-16 Fighting Falcon and the F-22 Raptor. The purpose of the training is to practice formation flying with dissimilar aircraft while certifying the pilots for the Heritage Flight demonstrations for the upcoming air show season.

The most advanced aircraft used for the Heritage Flight is the stealth tactical fighter known as the Lockheed Martin F-22 Raptor. The F-22, a 5th generation fighter, is an air superiority fighter with capabilities for precision ground attack, electronic warfare, and other roles. The low observable and highly maneuverable F-22 reached Initial Operational Capability (IOC) on December 15, 2005 and has been a valuable weapon in the arsenal of the United States Air Force (USAF) ever since. 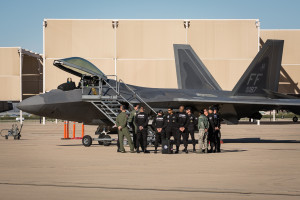 According to Captain John “Taboo” Cummings, the 2014 and 2015 F-22 demonstration pilot: “we call it a 5th generation fighter, in that: stealth, supercruise, which is the ability to exceed the speed of sound and sustain it without afterburner, integrated avionics, which is the fusion of a bunch of data from a lot of different sensors via computer, rather than all that data being interpreted by the pilot, and, then finally, superior maneuverability with the thrust vectoring engines we have on the airplane”.

One of the showcase performers at many air shows throughout the U.S. has been the F-22 Raptor Demo and the F-22’s integration into the Heritage Flight performance. Based out of Langley Air Force Base in Virginia, the Air Combat Command (ACC) F-22 Demonstration Team is preparing to embark on a new air show season beginning with the Northrop Grumman Air and Space Show 2015 in Melbourne, Florida on March 21. The complete F-22 demo and F-22 Heritage Flight schedule can be seen HERE.

The purpose of the F-22 demo is to show the public the capabilities of this highly-advanced aircraft. While the stealth capabilities, supercruise, and integrated avionics cannot be properly showcased during the demonstration, “you can see just exactly how capable the jet is in terms of it’s maneuverability, which is what we show the American public” added Capt. Cummings. 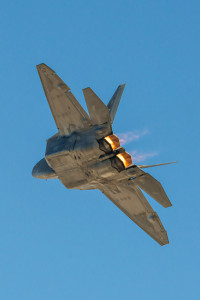 The maneuvers performed during the demonstration come from set guidelines developed by the USAF. Capt. Cummings elaborated: “it’s the same all of the time and there’s an Air Force instruction that governs the profile and says exactly what it is that we do. So, those maneuvers have changed slightly over the years, but, since the first demonstration in 2007, we have pretty much been going with the same profile. The Raptor is fairly unique in that it has a couple of capabilities that other airplanes don’t. Mainly the thrust vectoring and the ability to point it’s nose at will, in any direction, in any conditions. So, we showcase those capabilities with a couple of unique maneuvers other than what you see with other demo teams”.

According to Capt. Cummings his favorite routine is performing with the Heritage Flight. “All the maneuvers that the Raptor does in the air show can pretty much be performed by any (Raptor) pilot. In fact, they are used to teach new pilots the unique capabilities of the Raptor, I just do it a little closer to the ground then we normally would. Not everybody gets to fly with an historic airplane…a P-51 from World War II or an F-86 from the Korean War era…and that’s pretty cool” Capt. Cummings told APD.

In addition to performing the key maneuvers closer to the ground for an audience, the F-22 Raptor Demo is confined to performing these maneuvers within a specific perimeter within the demonstration venue. According to Capt. Cummings: “The idea is to hit all the parameters, as you want them, at a specific point in show center. …what’s really about making the show look good is rolling out, setting your line, doing good repositioning turns, and then you arrive exactly where you want to be with the parameters to get the maneuver”.

There are additional challenges when a modern jet fighter performs alongside slower/older aircraft as with the Heritage Flight. “The airplane is totally different, the power plant is different, which brings different characteristics in either a radial engine, inline engine, or a jet. The second is the wing, they have a cambered wing, we have a critical wing, so when we increase bank angle of attack, everything like that, that’s a significant change in induced drag versus the cambered wing that’s operating at the top of it’s envelope. When he starts to turn, believe it or not, because they are at the top-end of their envelope, the warbird can turn and pull away from the Raptor because we are so slow and we are already at a high-level of reduced drag with the design of our wing. That’s why we are here, that’s why we train at the Heritage Flight Conference, so we can understand what those differences are, so we can look good” said Capt. Cummings. 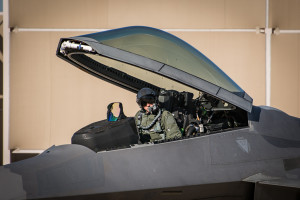 Captain John “Taboo” Cummings has been flying the F-22 for 5 ½ years and is an operational F-22 instructor pilot. He is the leader of the F-22 Demo Team, oversees any maintenance of the demonstration aircraft, and is the demonstration pilot for 2014 and 2015. Prior to joining the F-22 Demo Team, Capt. Cummings was assigned to the 94th Fighter Squadron (94 FS) out of Joint Base Langley–Eustis, Virginia.

For 2015, the F-22 Demo Team is schedule to perform at 21 different open houses, air shows, and other aviation-related events including two locations outside the U.S.. These locations include Abbotsford, BC Canada and Seoul, Korea. Some of those performances will include a Heritage Flight.

A special thanks to Lt. Erin Ranaweera, SSgt Courtney Richardson, Nicole Dalrymple, and the remainder of the 355th FW Public Affairs team for their hospitality and assistance during the 2015 Heritage Flight Training and Certification Course.

Steven can be reached at: [email protected]odigest.com
Send this to a friend
SUBSCRIBE TO OUR NEWSLETTER
All rights reserved © Aviation Photography Digest, 2022
Subscribe to our FREE newsletter and get notified when new articles are published.
Subscribe
×