Earlier this year, the Collings Foundation took a selection of their WWII-era warbirds on the road for the “Wings of Freedom” tour. This tour showcases three aircraft from the Collings Foundation’s prized aircraft collection. A Consolidated B-24J Liberator “Witchcraft”, Boeing B-17G Flying Fortress “Nine-O-Nine”, and a North American TP-51C Mustang “Betty Jane” embarked on a journey to bring aviation history to the public. 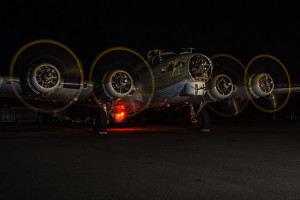 According to a Collings Foundation background sheet, “the “Wings of Freedom Tour” has two goals: to honor the sacrifices made by our veterans that allow us to enjoy our freedom; and to educate the visitors, especially younger Americans, about our national history and heritage”.

The background sheet also stated: “The Collings Foundation is a non-profit, Educational Foundation (501c-3), founded in 1979. The purpose of the Foundation is to organize and support “living history” events that enable Americans to learn more about their heritage through direct participation”. The Wings of Freedom tour has been a mainstay of the Collings Foundation for many years. According to Hunter Chaney, the Director of Marketing for the Collings Foundation: “The Wings of Freedom tour aircraft have been on a national tour for 26 consecutive years. It is the most long-lived and extensive tour in the world. Every year we visit around 110 cities across the United States over 11 months of the year. Our current stop in Murietta, CA is our 2,975th stop since we started”. It is estimated that over 3.5 million people see these fully restored historic aircraft annually.

Built in Long Beach, CA by the Douglas Aircraft Company and accepted on April 7, 1945. Did not see combat in WWII, but was used by the Military Transport Service. Spent some time as a fire bomber. Named “Nine-O-Nine” in honor of a 91st Bomb Group, 323rd Squadron plane of the same name which completed 140 missions without an abort or loss of a crewman.

The world’s only fully restored and flying consolidated B-24J Liberator. Was built at the Consolidated Aircraft Company’s Fort Worth, Texas plant. Under the British flag, the B-24 saw combat in the Pacific Theater in operations ranging from anti-shipping to bombing and re-supply of resistance force operations. After the war was used by the Indian Air Force. On September 10, 1989, after more than five years of hard work and 97,000+ hours of labor, the B-24 flew for the first time after restoration. Painted as “Witchcraft” in honor of the veterans of the 8th Air Force, who flew in the European Theater during WWII.

Built as a P-51C by North American at it’s Dallas, TX facility. Rebuilt in 2002-03 as a two-seat training version. The rebuild added a second seat with a full second set of controls and instrumentation that could be used for training purposes. 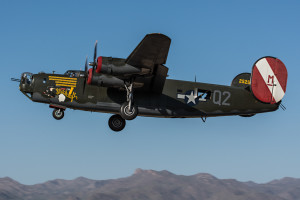 To keep these aircraft flying can be a very expensive undertaking. According to one of the B-17 crew members, for every hour of flight, ten hours of maintenance goes into the aircraft. In addition, the engines on these warbirds were not created with fuel efficiency in mind. It is estimated, while climbing, the B-17 uses 600 gallons of fuel per hour. While cruising, this number is reduced to 200 gallons per hour.

To help offset these costs, donation-based rides are offered on the warbirds along the tour, and a small donation is asked for people who would like to see the warbirds up close and tour the interior. According to Chaney, “To see these historical aircraft in a museum you might remember. To see these aircraft flying – you never forget. It all comes down to funding. It is incredibly expensive to keep these aircraft in tip-top flying condition. Airshow organizers no longer have the budget to pay for rare civilian war-bird demonstrations. We now depend mostly on donations to keep these aviation treasures flying and accessible to the public”.

Donations are only part of what is required to bring these aircraft to the public. Many of the pilots, maintainers, crew members, and other necessary staff donate their time as volunteers. Thousands of hours of volunteer assistance helps offset the potential labor costs that could make sustaining these aircraft unrealistic.

As for the Collings Foundation’s aircraft collection, it is an impressive one. An overview of the collection can be found here:

With the Collings Foundation, aircraft acquisition and restoration is ongoing. Chaney elaborated: “We are currently working on a very rare Spitfire restoration, P-40 restoration (last surviving Pearl Harbor fighter), a Focke Wulf F-8 and D-9 restoration, – just brought in the core Jacques Littlefield Collection (largest privately held collection of tanks and military machines) and building The American Heritage Museum to house the collection, and almost complete on a new TF-51 Mustang restoration”. Cheney also hinted that much more is in the works.

The Collings Foundation motto “Preserving Living Aviation History” does not only apply to aircraft, they also have an extensive collection of historical vehicles and military machines.

Carp was just a small boy when he remembers his Uncle Chuco showing up unexpectedly at a family home. Carp remembers Chuco yelling “is anybody home”, realizing it was his uncle, little Carp ran to see him. Chuco was wearing his United States Army Air Corps gear complete with duffle bags, as this was a quick visit home before being deployed to the European Theater of Operations during World War II.

Uncle Chuco was known as Jesus M. Salas from Globe, Arizona. Sgt. Salas was with the 367th Bomb Squadron of the 306th Bombardment Group. He was a Ball Turret Gunner on a Douglas-made B-17G “Four Leaf Clover” (42-37942). On May 8, 1944, Sgt. Salas lost his life when “Four Leaf Clover” went down over Germany on the way to a bombing run over Berlin. 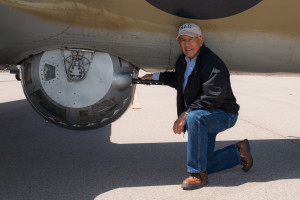 Carlos Salas near the ball turret on a B-17

Carp, Carlos Salas, was seven years old at the time he lost his uncle. As a young child he did not realize the impact losing his uncle would have on himself and the small community of Globe, Arizona. “It was a real traumatic situation, I was seven years old, in second grade, we were pulled out of school because the family received the first telegram that he was missing in action. When we got home, we lived in a small barrio of nothing but Hispanic people, and the house was just packed inside and outside with lots of family members, mostly older people that were there to comfort the family on that telegram that we had received”, said Carlos.

As Carlos grew older and he read and understood the many documents from the Department of Defense, he became fascinated with the aircraft his uncle flew on…the B-17. “It began in my high school years, when I got older, since I was only seven years old when my uncle’s plane came down over Germany in 1944. It wasn’t until later years I was able to see the documents about what had happened. So, my fascination with the B-17 began when I was 17 or 18”, Carlos stated.

On April 16th, Carlos got to fulfill a lifelong dream of flying in a B-17. The B-17 he flew in was the Collings Foundation’s B-17G “Nine-O-Nine”. This “G” model is very similar to the one Carlos’ uncle flew in and it was manufactured in the same Douglas facility in Long Beach, CA. 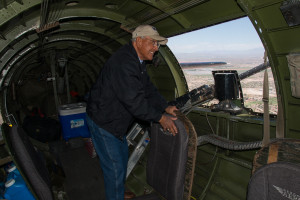 The flight from Mesa, AZ to Marana, AZ was an emotional one for Carlos. “I had to hold back the tears. Especially, standing over the bottom turret gunner’s area know that that’s the area he was stationed and just thinking when his plane was going down, how terrible it must have been for him not to get out of there, or for any of his comrades,  that could not get out of that plane and they all perished”, said Carlos.

It also brought back some positive memories of his uncle. “It brought a lot of memories of running around with my uncle and him protecting us when we were mischievous when we were little kids. Like I said, I was only seven years old when he lost his life but I remember him quite well. He cared for us a lot. The whole history of it is that myself, and my two older brothers, we were raised by our grandparents. My mother’s family consisted of nine brothers and sisters, plus my grandmother and grandfather, so it was fourteen of us living in one household”, Carlos reflected.

Several years ago Carlos visited his uncle’s burial place at Ardennes American Cemetery and Memorial in Neupré, Belgium. Carlos mentioned that the visit brought some closure to the tragedy of losing his uncle. He saw that his uncle was in a beautiful place, surrounded by his brothers in arms, and he felt at peace. While riding on the B-17 was not quite as significant, it did help Carlos feel closer to the uncle he lost many years ago.

Moving forward, the Collings Foundation will look to continue their tradition. As Hunter Chaney stated: “Since the Collings Foundation was founded in 1979, our goal is to engage people in history as both a means to better understand and motivation to want to learn more. We had found the organizing of ‘Living History’ events – particularly around aviation and transportation – is a very effective means to do just that – engage. We will continue our objectives in presenting history in a manner that you will never forget. I have always regarded our programs as the finest form of “edutainment””.

The aircraft on the Wings of Freedom Tour represent an era in history that was vital in shaping our country into what it is today. They remind us that many sacrifices were made for our freedom. They represent a special significance to the veterans and family members of veterans that fought in WWII. People like Carlos Salas can attest to this significance.

For more information on the Wings of Freedom Tour, or to see if the tour is coming to an airport near you, you can view the tour schedule HERE.

A special “thank you” to Hunter Chaney, Ryan Keough, Jim Harley, and the rest of the Collings Foundation Wings of Freedom Tour crew for their assistance and wonderful hospitality in the preparation of this article.