Stunning Air to Air video of the ‘Doomsday Plane’

It continues last years series of trials between the KC-46 and the E-4B which has the nickname, “The Doomsday Plane”.

The E-4B serves as the National Airborne Operations Center (NAOC) and is a key component of the National Military Command System for the President, the Secretary of Defense, and the Joint Chiefs of Staff.

With a total of four aircraft are operated by the 1st ACCS and in case of national emergency or destruction of ground command and control centre’s, the aircraft type provides a niche role with a highly survivable command, control, and communications centre to direct U.S. forces, execute emergency war orders, and coordinate actions by civil authorities.

If the NAOC is conducting its primary mission well then it is not really what you want to be witness to, as these aircraft are only rolled out for that mission set when something really bad has happened like September 11 2001.

Other roles the four E-4B aircraft are used for is to provide transportation for the United States Secretary of Defence and also shadow Air Force 1 most notably when the current sitting U.S. President conducts engagement with International partners overseas.

The four E-4B’s have been deployed to Lincoln Airport since March 2021 due to Offutt AFB conducting upgrades to the main runway at the base, which is scheduled to reopen later this year in September. 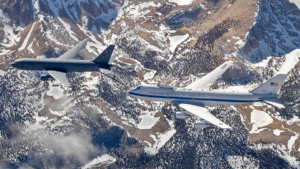 Test pilots and personnel from the 418th Flight Test Squadron, out of Edwards Air Force Base, California, conducted aerial refueling testing with a KC-46 Pegasus and an E-4B Nightwatch, out of Offutt Air Force Base, Nebraska, in the skies over Southern California, April 4. (photo by Christian Turner) 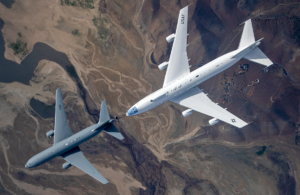 Test pilots and personnel from the 418th Flight Test Squadron, out of Edwards Air Force Base, California, conducted aerial refueling testing with a KC-46 Pegasus and an E-4B Nightwatch, out of Offutt Air Force Base, Nebraska, in the skies over Southern California, April 4. (Photo by Christian Turner)