Spartan’s working in the Dust

Pitch Black 2018 provided many firsts for the Royal Australian Air Force. Among them, was utilising the capabilities provided by the little pocket rocket battlefield air-lifter the Alenia C-27J Spartan operated by No. 35 Squadron currently based at RAAF Base Richmond.

As Pitch Black is centred around air control or maintaining air superiority objectives which is the main training objectives tor all participants. Also, there is a much broader focus now on ground forces or Special Forces insertion and extraction provided by capable tactical transport aircraft such as the C-27J. This translates to the Air-Land integration focus that is now a prominent feature of the last two Pitch Black exercises.

Apart of this year’s exercise was the objective to establish a forward operating base by the construction of an austere airbase in two days at Batchelor airfield in-between Darwin and Katherine where RAAF Base Darwin and RAAF Base Tindal are located.

Two No. 35 Squadron C-27J Spartans parked on the flight line at RAAF Base Darwin during Exercise Pitch Black 2018. © Commonwealth of Australia, Department of Defence

The location to construct an austere airfield was chosen in an ideal area to showcase the RAAF’s ability to set up a base in the remote parts of Australia’s north.

To begin a Combat Control Team from Air Force’s No. 4 Squadron descended upon Batchelor in the early stages of the exercise supported by close air support and air superiority aircraft.

Their goal was to capture, survey, mark and control the airfield – ensuring it was fit for purpose and control air traffic before handing it over to No. 382 Contingency Response Squadron (382CRS) to commence the build of an austere air base.

“We conducted a survey task in preparation to hand off to the combat support group follow-on force.”

Flight Lieutenant J then said more about what their tasking involved in this part of Exercise Pitch Black.

“Our main combat controller integration has been with Air Combat Group and Air Mobility Group.”

The Combat Control Team was also supported by the US Marine Corps who transported two operators and the All-Terrain Vehicles to Batchelor using the MV-22 Osprey. Once landed and prepared,  teams can use highly sophisticated equipment to measure gradients, lengths, soil strength and many other things crucial to successful aircraft operations.

Combat Controller Sergeant S discussed what is at their disposal to achieve their objectives.

“The equipment we use to fulfil our missions depends on what the specific mission is,” Sergeant S said.

Once 382CRS has constructed and maintained control over the airfield which was supported by Security Forces from the U.S. Air Force Army and the Australian Army’s 9th Force Support Battalion along with No.2 Security Forces Squadron.

382CRS objective was to be capable of receiving C-27J Spartan aircraft and turn them around in support of the wider operations being undertaken by No.35 SQN.

For No.35 SQN operating in this environment in the Australian Outback especially operating from a austere airfield at Batchelor especially with short an unpaved runways and apron areas that were used for loading and unloading the aircraft. 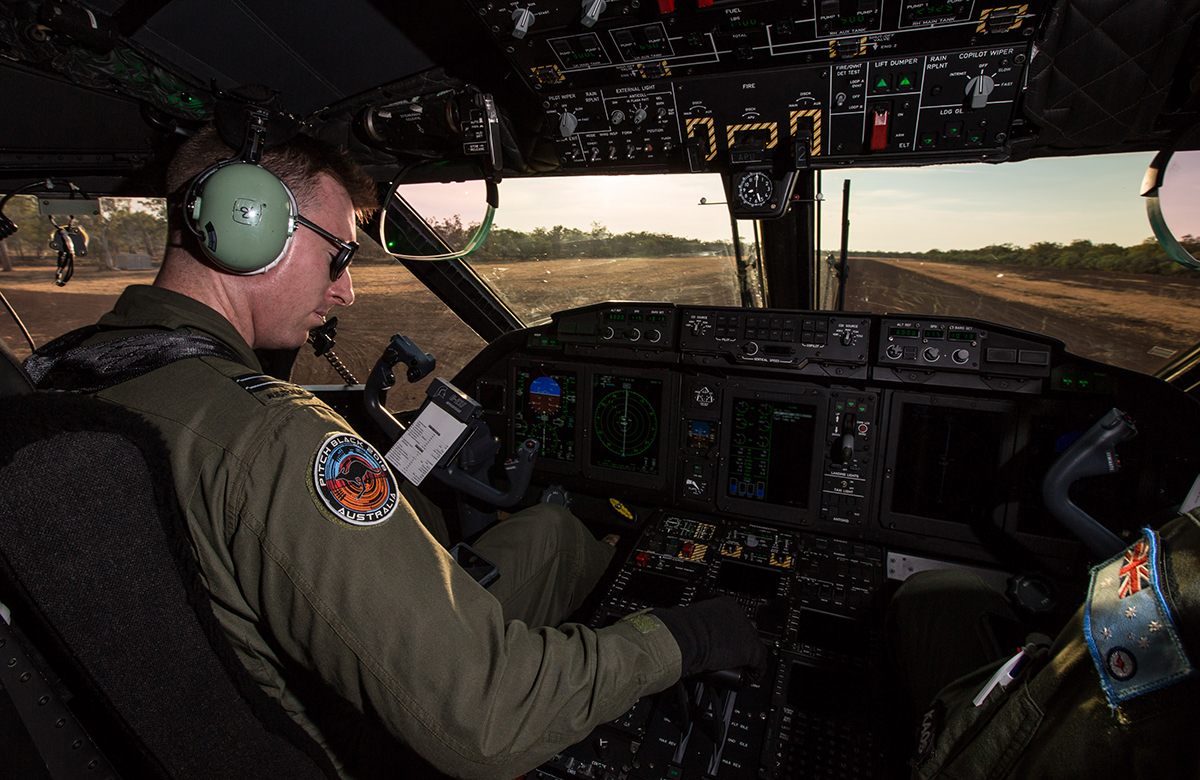 RAAF Flight Lieutenant Daniel Braid a pilot from No.35 Squadron said that Batchelor was a great training ground for the crew and the newly acquired aircraft which recently received its 10th and final C-27J earlier in the year.

“Operating a Spartan from an austere airbase has been challenging as it was something different to the training we do back at home.” FLTLT Braid said.

“It’s the reason why we bought these aircraft- so we could operate from the more forward deployed locations.”

A part of this year’s Pitch Black, which was more of an add-on to this year’s exercise for No.35SQN, was that the abilities of the Spartan could be utilised in operating from a forward austere airfield. Mission scenarios that were undertaken in support of simulated humanitarian assistance- disaster relief roles. This is something which this aircraft is very capable of performing relatively quickly being a fixed wing aircraft, but also being able to operate from shorter runway lengths relatively close to a disaster zone’s epicentre.

No.35SQN though conduct a varied array of missions from humanitarian assistance to the support of ground forces in a simulated battle area.

FLTLT Braid stated, “The Austere setting allowed us hostage all of our C-27J capabilities.” “At Batchelor we conducted air land and air drop of cargo and personnel on various drop zones that we had around the Northern Territory, this type of resupply capability for troops

in the field is one of many tasks for which hotel Spartan is suited.” he said.

Speaking to Commanding Officer of No.35 Squadron Wing Commander Ben Poxon he was able to highlight to APD the three key objectives to learn from in Exercise Pitch Black 18 for No. 35 SQN were:

WGCDR Poxon states, “One of the primary roles for the Spartan crews during Exercise Pitch Black was the capture and sustainment of Batchelor Airfield, approximately 100 kilometres south of Darwin. It’s not too far, but the combination of big airspace and large formations meant this was probably the most complex exercise 35 Squadron’s been involved with to date.”

Up to this stage, No.35 SQN has been able to take part in exercises in the South Pacific area most notably at Exercise Cope North 2018 deploying two C-27J Spartans to Andersen Air Force Base in Guam and as recently training with the Australian Army and the Marine Rotational Force Darwin MAGTF (Marine Air Ground Task Force) at Shoalwater Bay training area near Rockhampton in Queensland for Exercise Hamel.

He continues, “Obviously a key focus for Pitch Black is on the Large Force Employment, but the Air-Land Integration piece has grown significantly in recent years, with the involvement of airfields at Delamere and Bradshaw.”

With Exercise directors to rehearse a wider variety of Air-Land and Combat Support missions that the Spartan sat at the heart of introducing Batchelor airfield into this year’s exercise allowed those scenarios to take place and allow No. 35SQN to train in a unique environment.

WGCDR Poxon goes on to explain exactly what aircrews from No.35SQN were able to achieve during the exercise in a large force employment exercise.

“Once ‘Blue Force’ is able to win control of the airspace, we’re able to come in and deliver effects on the ground. That might include airdropping Special Forces or supplies to our Joint Terminal Attack Controllers to a Drop Zone, or landing on an austere airstrip to evacuate non-combatants or ‘wounded’ from a forward airfield.”

“Exercise Pitch Black 18 was probably one of the best demonstrations of what we want to achieve with the Spartan as our Battlefield Air-lifter to date. The aircraft’s still in the very early stages of its RAAF career, although in the past 12 months we’ve conducted Exercises Southern Katipo, Cope North and Mhanuu across the Pacific, and Hamel at home.”-he said.

WGCDR Poxon continues, “What made the Pitch Black experience unique was we were able to demonstrate a range of airlift missions in different scenarios and threat environments, sometimes getting into airfields that were off limits to larger air-lifters (C-17A Globemaster/ C-130J Hercules).”

“There’s going to be room for us to grow our mission as we develop the capability to FOC and beyond, but Pitch Black 18 was a very positive learning experience for us.”

With the C-27J now at full strength with No.35 SQN and with a big year training at various exercises around the South Pacific, aircrews with the Squadron are looking forward to showcase what the Spartan can do at future exercise the Squadron are participating in.

It will also be a big finish to the year into 2019 when the Squadron transfers its home base of operations from RAAF Base Richmond to RAAF Base Amberley, something that the Squadron is very much looking forward to. 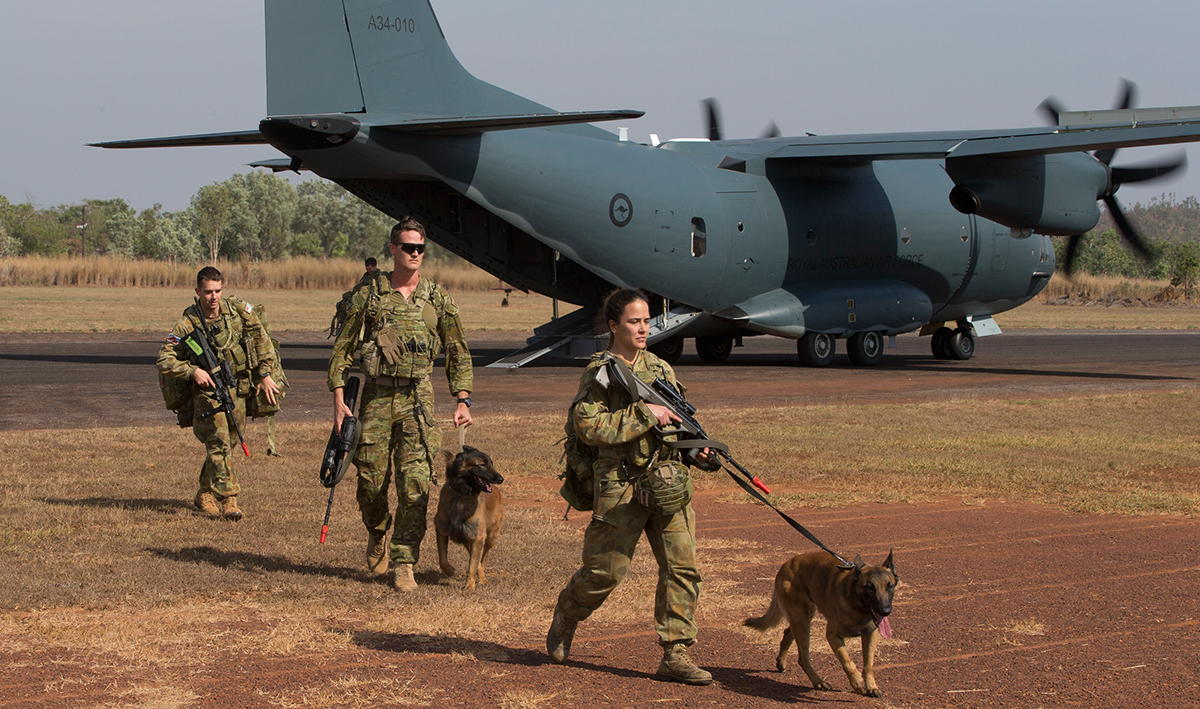 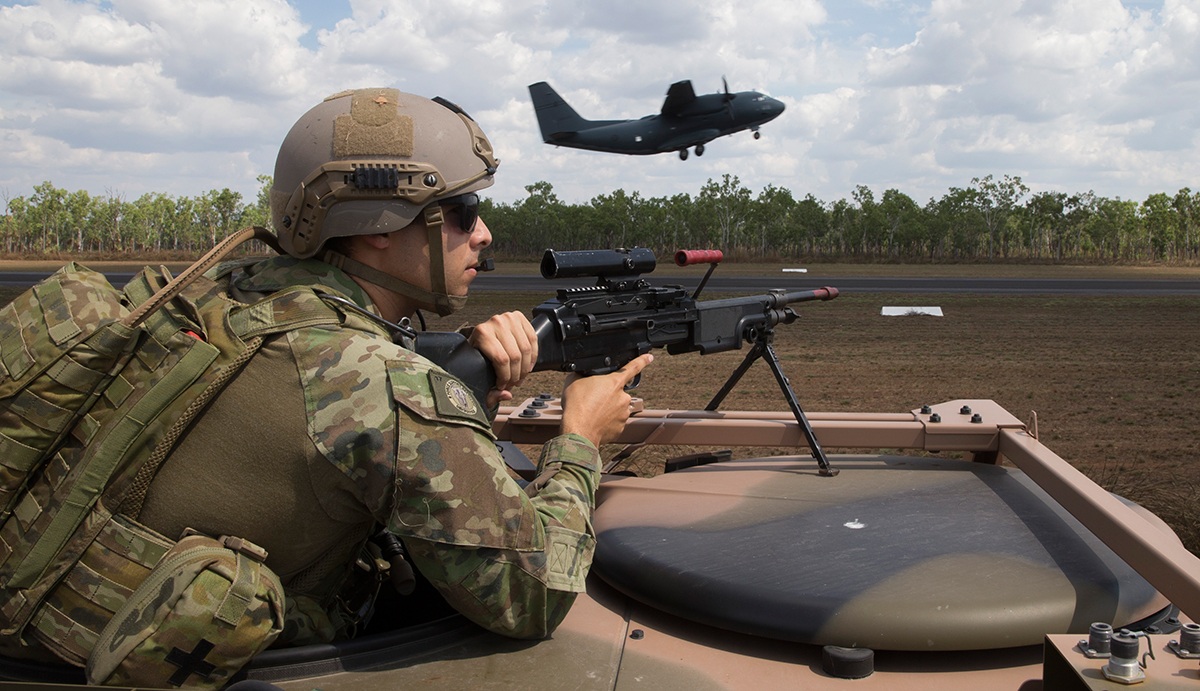 Australian Army Private Salvatore Fazio from the 9th Force Support Battalion protects the airfield as a C-27J Spartan takes off from Batchelor Airfield in the Northern Territory during Exercise Pitch Black 2018. © Commonwealth of Australia, Department of Defence 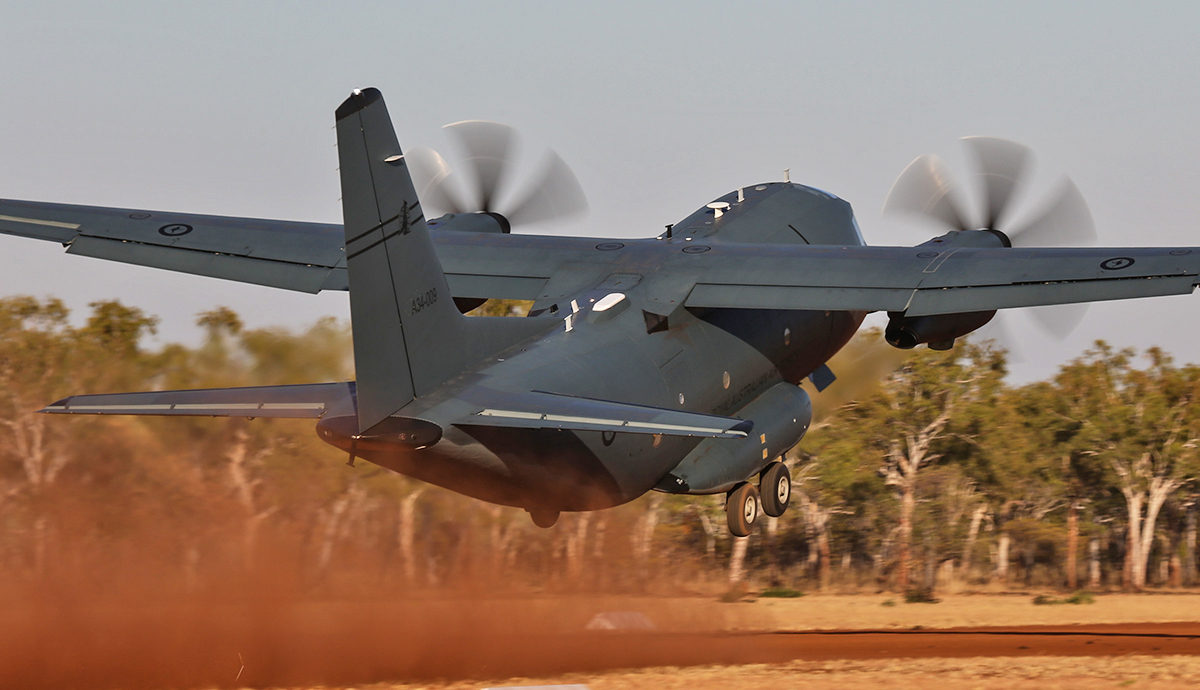 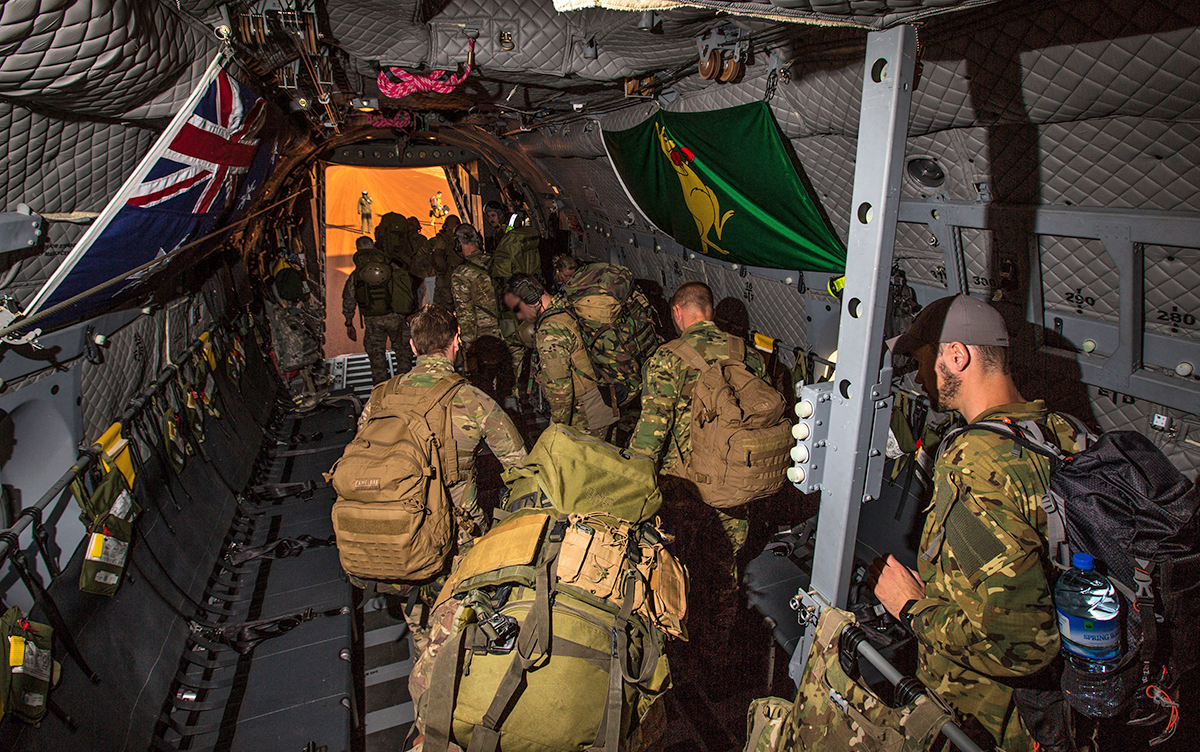 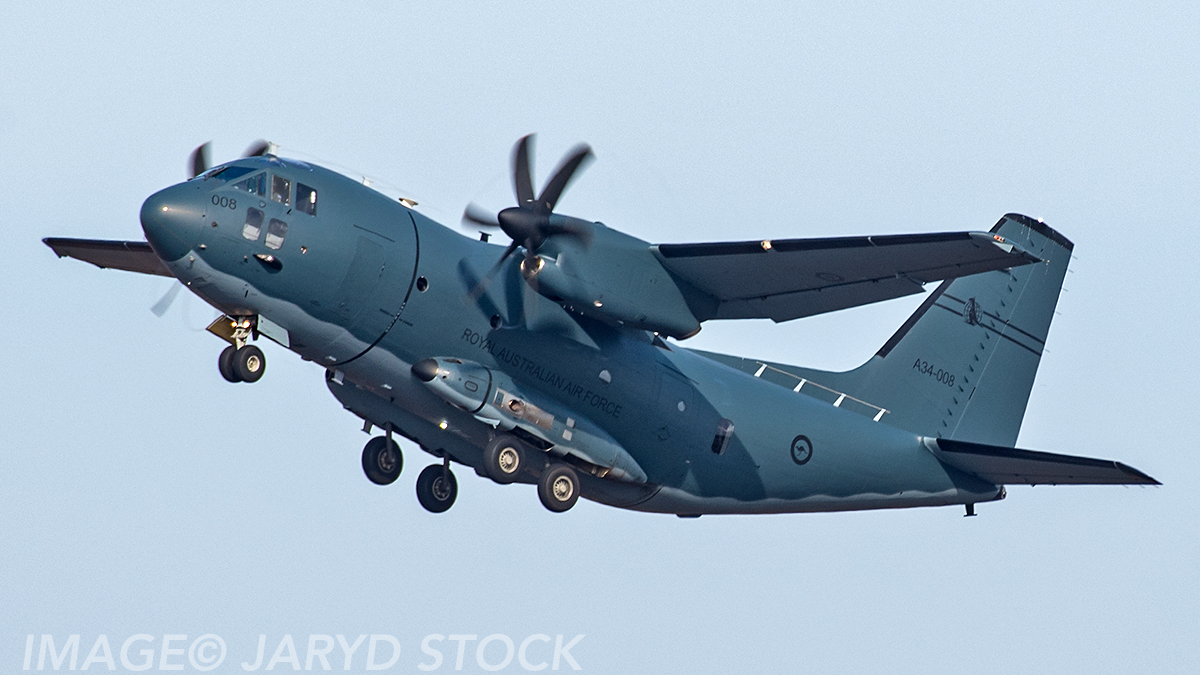