Spartans and their Flying Stallions

If you have any sports team that is dominating the competition in whatever it is they are playing, like NFL (gridiron) or in Australia, the Aussie rules football (AFL); when the coaches and the players of that team are asked by media why are you so successful; they will usually respond to that question saying, “We all know our roles and we get the basics right and train over and over again.”

This principle of knowing your own roles and getting back to basics was certainly on show during Talisman Sabre 21, with Royal Australian Air Force (RAAF) No 36 Squadron conducting a variety of roles during the exercise. This was on show last week as over one hundred United States Spartan Paratroopers ﬁlled the skies over Charters Towers at the Kangaroo drop zone in a spectacular airborne display highlighting the RAAF’s ability to work with United States Army.

The C-17 paradrop is not a new thing conducted in this year’s Talisman Sabre as past iterations of the exercise have seen C-17 airborne assaults being conducted. Most notably a ﬁve ship formation of C-17’s that saw a mixed company of RAAF and United States Air Force (USAF) Globemasters operate together for the ﬁrst time, ﬂying from Joint Base Elmendorf-Richardson Air Force Base non-stop to the Shoal-water Bay Training Area where they conducted the airborne assault, before all ﬁve aircraft landed at RAAF Base Amberley after their mission.

Even with a worldwide pandemic that certainly had an eﬀect on the size of Talisman Sabre 21, it wasn’t able to stop No 36 Squadron and the U.S. Army paratroopers training together and gaining even more conﬁdence in working together. The U.S. Army Paratroopers – known as the Spartan Brigade – that participated in the assault were based in Alaska from the 4th Infantry Brigade Combat Team (Airborne), 25th Infantry Division.

“This is one of the large-scale activities that Exercise Talisman Sabre is renowned for. It’s a demonstration of immense skill by a highly-trained team, and a true test of our ability to operate together,” Major General Ellwood said.

Once on the ground, the Paratroopers were airlifted by an Australian CH-47 Chinook helicopter to the Townsville Field Training Area where they joined soldiers from the 3rd Brigade to assault enemy forces as part of a ﬁctitonal training scenario. Spartan Brigade Commander, Colonel Michael ‘Jody’ Shouse said the parachute drop was a key activity for TS21, demonstrating how Australia and the US can operate together to execute complex manoeuvres.

“Executing airborne operations thousands of miles from our home station alongside our allies and partners such as the Australian Defence Force is the strength of our organisation,” Colonel Shouse said.

“Exercises like Talisman Sabre really show the capability of our Paratroopers.”

U.S. Army Brigadier General Eric Strong who was on the ground at the Kangaroo drop zone overseeing operations talked to APD and explained what the paratroopers role was once they are inserted on the ground.

“As a part of the tactical scenario, once they land they will go ahead and secure the local area for follow-on forces, which will take them on a series of small unit tactical actions. Once the commander determines that he has secured the area the paratroopers will link up with Australian Ch-47 Chinook helicopters and link up with Australian Army 3rd brigade operating in the Townsville Filed Training Area.” 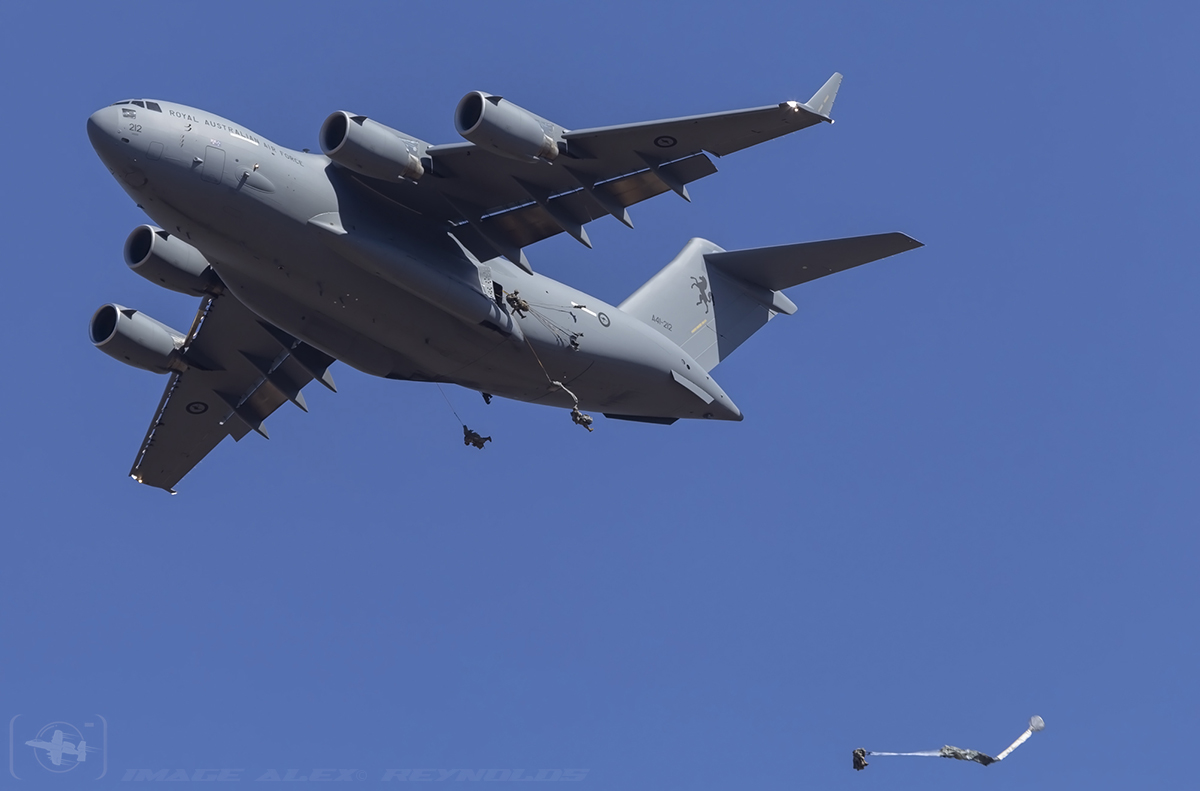 These operations working together take years to coordinate between the U.S. and the Australian defence units, with Bri.Gen. Strong saying that once one iteration of Talisman Sabre is over, planning for the next one starts immediately. The training in Talisman Sabre for No 36 Squadron and the U.S. Army again is something that has been seen before, but it’s building on those past relationships that have been established to get a better understanding of how one another works and doing the basics right the ﬁrst time.

Inside the aircraft it is a dynamic environment as the C-17 descends in altitude from its causing height and is ﬂying low, heading fast towards the drop-zone. Due to natural heat thermals, turbulence shakes the Globemaster as all paratroopers are now standing in the rear cargo hold, attached to a line running the length of the aircraft, going through their ﬁnal checks.

As the minutes tick down, the paratroopers pat each other down, changing their drills. The seconds dwindle, the Australian loadmaster raises his ﬁngers in the air, his voice muﬄed over the loud roar of the open side door. Over the headset, the pilots can be heard beginning to countdown.

Rushing out the two side doors one on either side of the massive aircraft, the paratroopers step outside into the open Queensland sky, their heavy ﬁeld packs attached to their fronts, parachutes billowing out the back one after the other.

From the ground, a line of parachutes descends across the horizon, slowly trailing the C-17A.

Over the headset, the pilot once again counts down the seconds until the drop zone disappears from view.

The loadmaster slams the side doors closed, as over 100 United States paratroopers disappear into the exercise below. Another Exercise Talisman Sabre training serial complete.

He continues, “We also have that human dimension to that relationship, so we have U.S. service members and Australian service members working side by side that will spend the next 72 hours together working in the ﬁeld together and you don’t get to experience that all too often.”

Training over and over again, knowing your role and doing the basics right will always see the dominant team win the day. Exercise Talisman Sabre for No 36 Squadron and the 4/25 infantry division will help galvanise the strong relationship that has been forged together, and ensure that objectives are always met and the team will win on any given day. 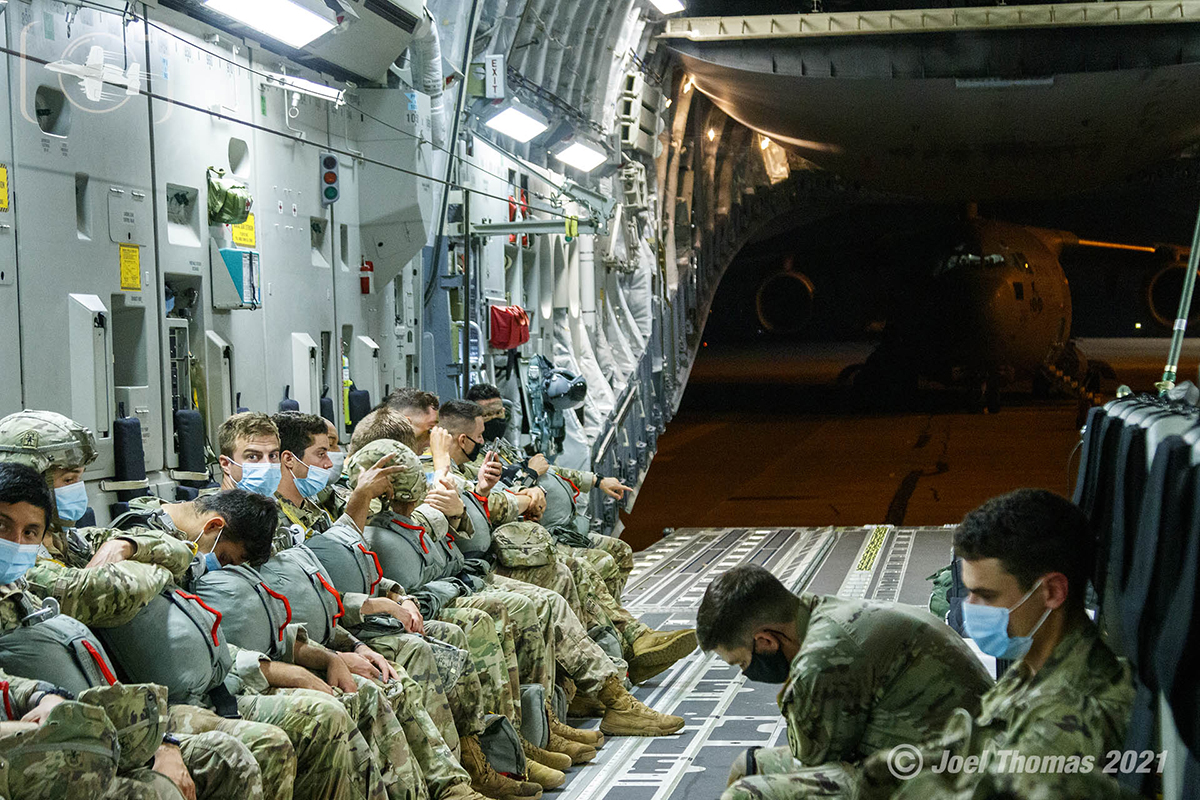 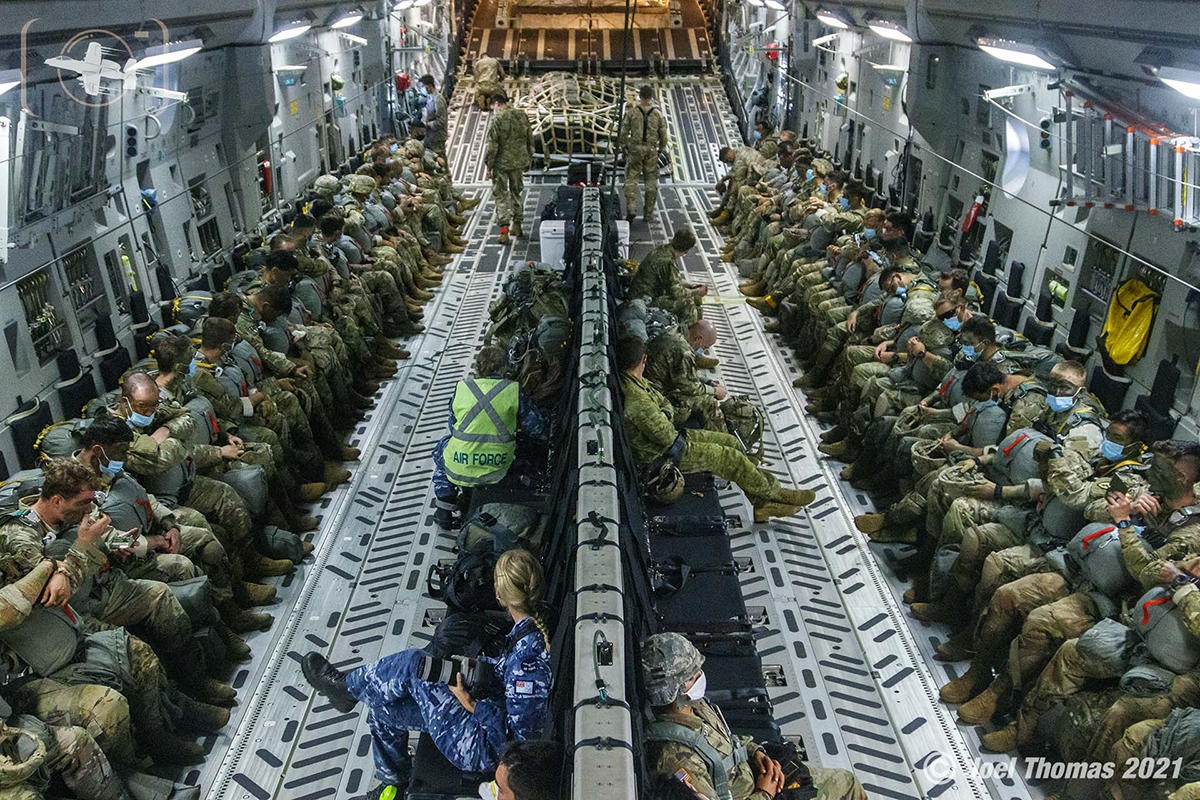 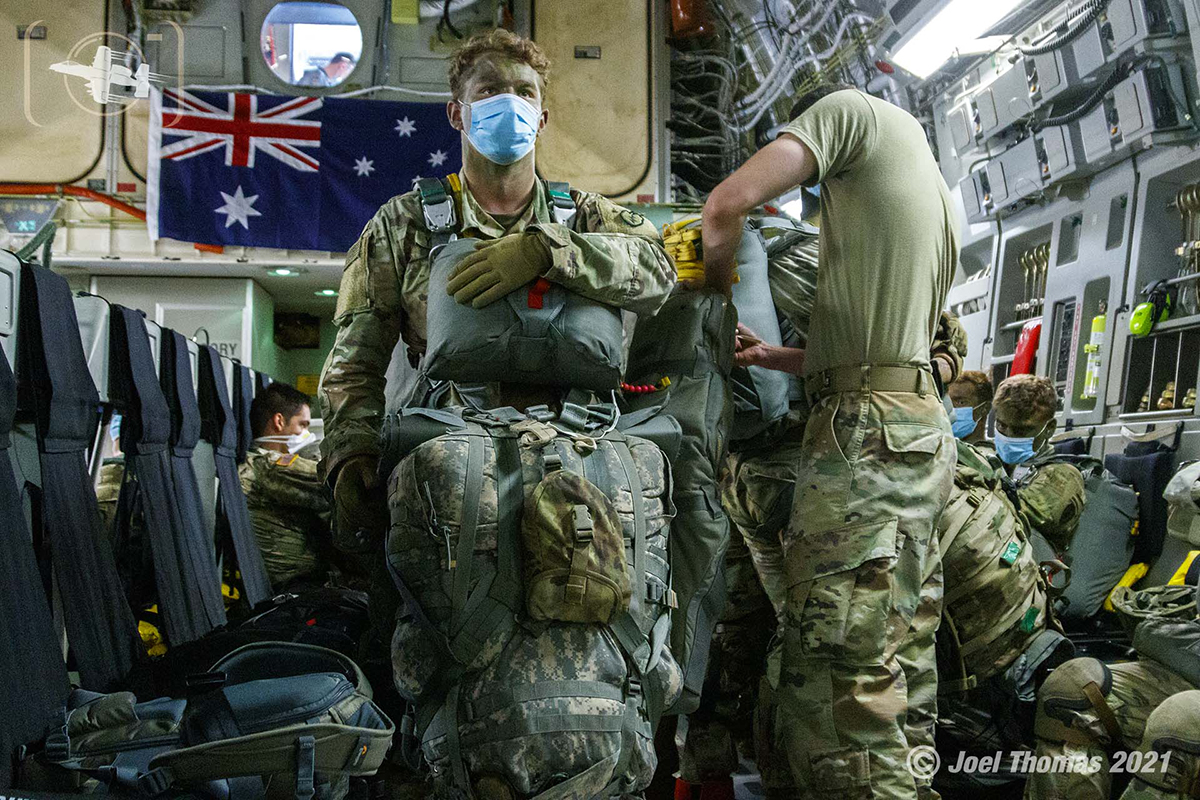 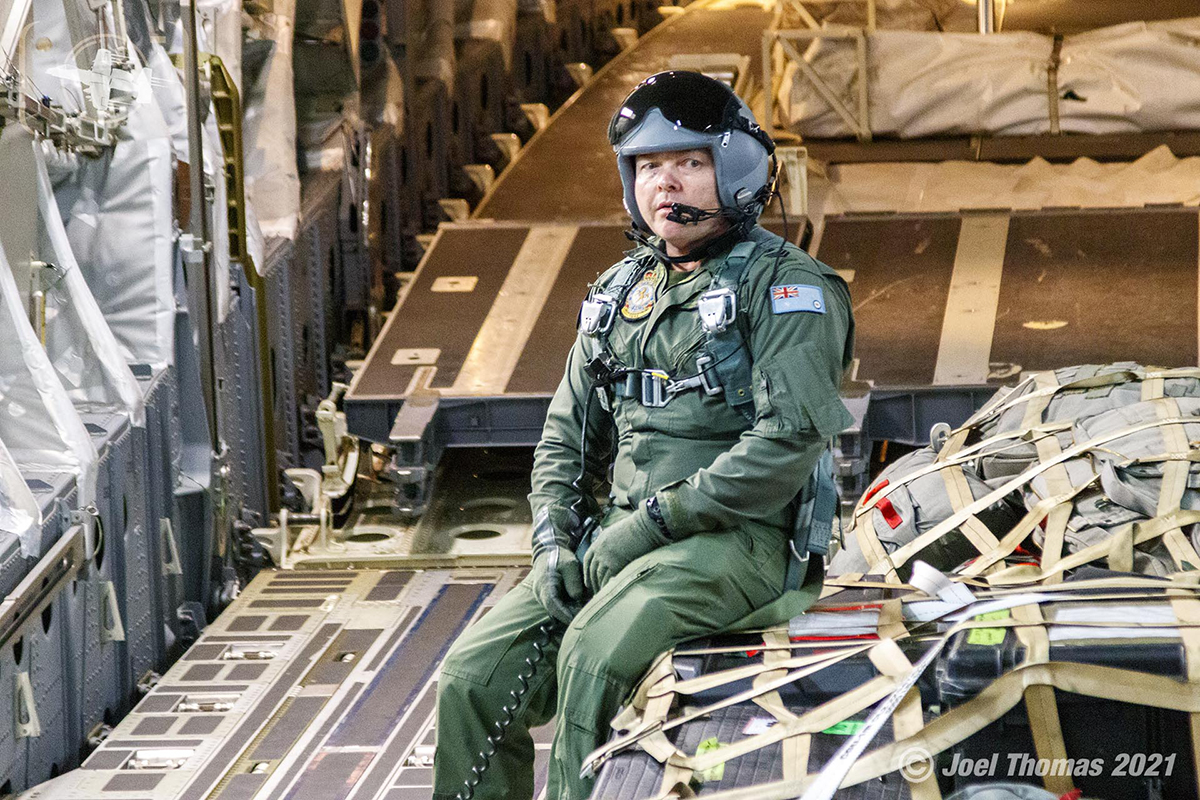