SERE : Preparing for the Unknown

SERE : Preparing for the Unknown

On June 2, 1995, United States Air Force Captain Scott O’Grady’s F-16C Fighting Falcon was shot down over Bosnia by a Serbian SA-6 “Gainful” surface-to-air missile and was forced to eject into hostile territory. Capt. O’Grady was able to evade capture for six days until he was rescued by a United States Marine Corps tactical recovery team. During those six days in enemy territory, Capt. O’Grady stored whatever rainwater he could and ate bugs, grass, and leaves. The reason Capt. O’Grady was able to survive can be attributed to his strong will and an extensive training course he took that prepared him for the possibility of being downed behind enemy lines. This training course was SERE.

SERE (Survival, Evasion, Resistance and Escape) training is conducted for all members of an aircrew in all of the U.S. military branches. The purpose of the training is prepare members of an aircrew to be able to survive on their own in any environment, under any conditions, in the case they have to eject from an aircraft or the aircraft crashes. This training, a combination of classroom and field training, is among the most important training military aviators and crew members will receive.

For the United States Air Force, the SERE school is located at Fairchild Air Force Base in Washington and is conducted by the 336th Training Group. SERE training takes place at three levels. Level A is entry-level basic SERE training. Level B is more advanced and focuses on survival and evasion. Level C focuses on resistance and is reserved for those at a high risk of capture.

SERE training is built around the six articles of the Code of Conduct. These articles have roots that began with the experiences of POW’s from the Korean War. The six articles are:

1) I am an American, fighting in the forces which guard my country and our way of life. I am prepared to give my life in their defense.

3)If I am captured, I will continue to resist by all means available. I will make every effort to escape and to aid others to escape. I will accept neither parole nor special favors from the enemy.

4) If I become a prisoner of war, I will keep faith with my fellow prisoners. I will give no information nor take part in any action which might be harmful to my comrades. If I am senior I will take command. If not, I will obey the lawful orders of those appointed over me and will back them up in every way.

5) When questioned, should I become a prisoner of war, I am required to give name, rank, service number, and date of birth. I will evade answering further questions to the utmost of my ability, I will make no oral or written statements disloyal to my country and its allies or harmful to their cause.

6) I will never forget that I am an American, fighting for freedom, responsible for my actions, and dedicated to the principles which made my country free. I will trust in my God and in the United States of America. 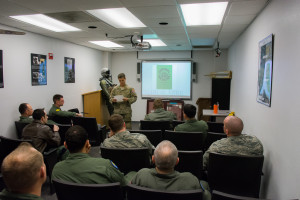 According to a USAF Survival School fact sheet: “The basic course, which instructs all aspects of SERE, lasts 19 days and occurs 49 weeks out of each year. The majority of the course is taught at Fairchild AFB; however, six days are spent approximately 70 miles north of the base, in the mountains of the Colville and Kaniksu National Forests. This course consists of physical and psychological stresses of survival, hands-on training in post-ejection procedures and parachute landing falls, survival medicine and recovery device training and equipment procedures. In the field, students receive additional training which includes food procurement and preparation, day and night land navigation techniques, evasion travel and camouflage techniques, ground-to-air signals and aircraft vectoring procedures and shelter construction. Finally, students are returned to Fairchild and receive Code of Conduct Training in evasion and conduct after capture”.

While most of the training is encompassed into the basic SERE course, ongoing training is done regularly on a local level for USAF aircrew. At Davis-Monthan Air Force Base in Tucson, Arizona, Combat Survival Refresher Training takes place monthly and rotates in pilots and aircrew members that are based at Davis-Monthan AFB for refresher training. While some time is spent in the classroom going through an overview of survival techniques, according to SERE Specialist TSgt Tony Fancher application of the techniques takes place out in the field. Combat Survival Refresher Training involves “practice going out into field, being an isolated person, surviving off the land, evading enemy forces, and trying to get recovered” stated TSgt Fancher.

Two important points that are stressed during the classroom portion of the training are to know and understand what plants, bugs, etc… are edible or medicinal in the area of risk, and most importantly, understanding how the “will to survive” can provide added determination, strength, and courage to survive and evade. Having a positive mental attitude (PMA) and a strong “will to survive” can help overcome insurmountable odds. Arctic explorer Ernest Shackleton and his crew of 28 men became shipwrecked in the harsh Antarctic Ice. Surviving in the harsh arctic cold against all odds, all 28 men were able to survive for the nearly two years they were stranded in those conditions. Shackleton’s “will” and determination to save, not only himself, but every single one of his crew members prevailed.

While basic SERE training at Fairchild AFB utilizes the lush National Forests of Washington State, local training is often limited to the local terrain. According to TSgt Fancher, one of the biggest challenges of the local Combat Survival Refresher Training is: “making it realistic enough for them. It helps when I have volunteers that come out and play opposition forces, or enemy forces, or people to help me out logistically, to make the scenario more realistic”.

Other survival training techniques include training on how to survive in water. This type of training typically takes place in a pool on the base. As an example, students are pulled across the pool to simulate how a chute landing in water would be pulled by the current. Students learn how to react and stabilize themselves in these situations and properly release from the canopy. 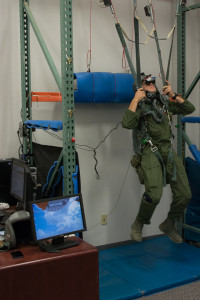 A Virtual Reality Parachute Simulation in action. The desktop monitor is displaying what the aircrew member is seeing.

Before survival techniques and tactics can be executed, a proper ejection from the aircraft is the first step. Whether a pilot is ejecting via an ejection seat, or a crew member jumping from an aircraft, good parachuting techniques are a must. From untangling twisted lines, selecting a good landing zone, and proper landing techniques, ongoing parachute training is vital to the SERE curriculum.

Fortunately, this type of training can be conducted indoors via Virtual Reality Parachute Simulation. Using a specialized harness for the look and feel of the parachute and other equipment that may be attached, parachute simulation training utilizes a head-mounted display. This display presents a simulated 360 degree image of a jump and landing area and uses head position sensors within the helmet and goggles to determine what image to present. Using these simulators, pilots and aircrew can practice proper parachuting techniques. A variety of real-world scenarios can be presented using multiple landscape models.

At Davis-Monthan AFB, this training helps prepare air crews for the ejection process during an in-flight emergency. Some unconventional landings, such as a landing in a heavily wooded area, are also incorporated into the Virtual Reality Parachute Simulation. Conventional parachute landings are practiced using standard gym mats. Techniques such as proper positioning of the body and proper roll techniques can be practiced using this conventional method. 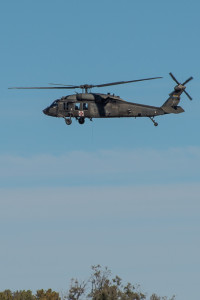 A UH-60A Black Hawk helicopter from Detachment 1, C Company, 5-159th Air Ambulance, based out of Phoenix drops a line to rescue a down pilot during a training exercise

On January 20, 2015 on one of Arizona’s many military operations area’s (MOA’s), U.S. Air Force and Arizona Army National Guard units conducted a joint training exercise. This training exercise drew on the SERE training and simulated the downing and rescue of two pilots. Air assets were used during this training. A-10C Thunderbolt IIs from the 354th Fighter Squadron, based out of Davis-Monthan AFB, and a UH-60A Black Hawk helicopter from Detachment 1, C Company, 5-159th Air Ambulance, based out of Phoenix participated in the exercise.

The situation involved two injured pilots downed in a remote enemy location. The pilots were two Airmen in a simulated role. SERE Specialist TSgt Tony Fancher helped coach the Airmen through the evasion and rescue process. A-10’s were used in a close-air support role to help identify the location of the downed pilots and suppress any identified enemy threats. During the exercise, the two downed pilots notified the A-10’s of their positions. When the A-10’s arrived the locations were confirmed with signal mirrors. After suppressing any enemy threats, the Black Hawk was called in for the rescue effort. Colored smoke was used to mark the pickup location for the Black Hawk.

Training exercises such as this not only help pilots and aircrew apply the lessons learned during SERE training, but it also helps units from different armed service branches, with dissimilar aircraft, learn how to integrate for future missions. In an interview with 355th Fighter Wing Public Affairs, Chief Warrant Officer 2 Jonathan Rovey, Det. 1, C Co., 5-159th Air Ambulance pilot in command stated: “Joint training between Army and Air Force crews is important so we can understand each other’s procedures, abilities and limitations”. “Flying with the A-10s was exciting and not something we do every day.”

Much like the term muscle memory, stress inoculation is one of the main objectives of the SERE training. The more someone is prepared, the more something is practiced, the less the likelihood that stress will impact performance and decision making. Ultimately, SERE training prepares aircrews for the worst to happen.

In the event an aircraft is downed in enemy territory, SERE training ensures that aircrew are prepared for the unknown. For the USAF, this training begins at Fairchild AFB, but requires ongoing refresher training to help build inoculation from stress if the worst happens.

Aviation Photography Digest would like to thank Lt. Erin Ranaweera and her team at 355th Fighter Wing Public Affairs for their assistance with this article.