The Royal Norwegian Air Force (RNoAF) was established in 1944 as a separate arm of the Norwegian Armed Forces. The Army Air Arm and the Naval Air Arm were merged to form the new Royal Norwegian Air Force. The RNoAF is headquartered at the Rygge airbase which is approximately 50 miles south of Oslo. Currently the RNoAF fixed wing inventory consists of 57 Fokker built F-16AM and F-16BM models, 4 Lockheed C-130J Transport aircraft and small numbers of Lockheed P-3 Orion and Dassault Falcon 20 aircraft for reconnaissance and patrol.

The RNoAF has approximately 1430 personnel (officers, enlisted staff and civilians). Also 600 draftees are serving their one-year national service. With mobilization the air force would consist of approximately 5500 personnel. In recent years the Royal Norwegian Air Force has participated in operations with their helicopters, F-16 fighters and C-130J cargo planes in areas such as Bosnia and Herzegovina, Kosovo, Lithuania and Afghanistan. 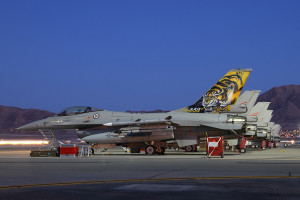 This March, the Royal Norwegian Air Force returned to Nellis AFB to participate in Red Flag 15-2, in this  the 40th year of Red Flag. They last attended the large scale exercise in 2009. The RNoAF brought 10 jets  over from the 338, 58, 51 and 52 squadrons out of the Orland and Bodo air bases, all F-16AM models. In addition, they brought over one C-130J and 200 airmen.

The RNoAF was represented by Major Egil Angell-Jacobsen at the Red Flag 15-2 interview panel. Major Jacobsen explained that they brought over as many operational pilots as they could. Pilots were selected partially by experience, he added, some have been to Red Flag before and some have not had any Red Flag training. The veterans pass on their experience from earlier flags and get the rookies up to speed quickly.

Major Jacobsen went on to explain that their role in the exercise will be essentially similar to the other F-16s involved; specifically 50% air to air and 50% air to ground. They are also here to test all their weapons and systems at the vast Nevada Test and Training Range (NTTR) which he characterized as exceptional. 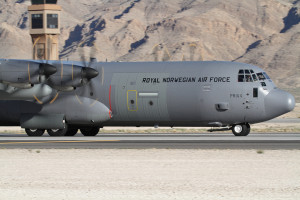 When asked if there are any challenges encountered at Red Flag, Major Jacobsen stated that there are no big challenges working with the other coalition partners, since they already train a lot with the US back home and they have been at Red Flag several times. The RNoAF does things almost the same way and uses the same publications for training as the US uses for their F-16s. He stated that no big integration issues have been encountered, and went on to say “of course, that’s why we come here – just to see that we are up to standards to join a coalition with the United States”.

Since they don’t have a large training range such as the NTTR, Maj Jacobsen says they perform most of their training over the sea and, since they have a large coastline, it’s easy to do that. There are some training areas in the south of Norway as well, which provide training in mountainous terrain.

When asked about the role of the C-130 in the exercise, Major Jacobsen stated that it would provide tactical airlift capability – dropping cargo and personnel.

One of the RNoAF F-16s, tail number 671, had a special tiger paint scheme on the tail initially added in  honor of the 2004 NATO Tiger Meet and it has remained on the tail ever since.

Interesting note: Major Egil Angell-Jacobsen passed 3000 hours in the cockpit of an F-16 fighter jet en-route to the Red Flag exercise. When he landed at Nellis Air Force Base, this accomplishment was recognized by his colleagues with a customary dousing of water as soon as he climbed out of the jet and touched American soil. This puts Major Jacobsen 4th all-time among F-16 pilots.

Aviation Photography Digest would like to thank the 99th Air Base Wing Public Affairs Office, MSgt David Miller and A1C Joshua Kleinholz for their assistance.