The Australian State of New South Wales and the City of Sydney have been inundated with rain for the last six days, where rising flood waters and strong winds have wrecked havoc along costal communities which has now endured their forth flood in eighteen months.

As a result the Australian Government tasked three Australian Defence Force Helicopters to be placed on standby before the rain event hit, to conduct various operations in support of Operation NSW Flood Assist if the need for such predominately rescue operations were tasked by Government.

A Royal Australian Navy Sikorsky MH-60R Romeo helicopter from 816 Squadron based at HMAS Albatross 2.5 hours drive south of Sydney has evacuated three residents from their home in the Upper Kangaroo Valley following threats to their safety from rising flood waters.

The helicopter was tasked when a Defence liaison officer working at Flood Watch Sydney based at Homebush, Sydney identified the State Emergency Services request.

Specialist civilian rotary wing aircraft which  had been unable to perform the evacuation due to severe weather conditions.

Commanding Officer of No. 816 Squadron Commander Lee Pritchard said the air crew overcame challenging conditions to ensure the safety of the isolated residents.

“An air crew member was initially lowered to the residence by winch, after which it was determined that three residents required evacuation, one of whom had exhausted their supply of medication after being isolated by flood waters nearby.

“Fortunately, the MH-60R helicopter is a very capable aircraft and, combined with a high degree of training and preparedness by our aircrew, has ensured the three residents are now safely under the care of the State Emergency Services.”

At the time of the tasking, the MH-60R helicopter had been airborne performing a training sortie while simultaneously on standby to respond to civil emergencies under local Defence Assistance to the Civil Community (DACC) arrangements. 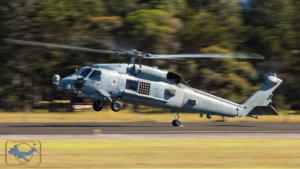 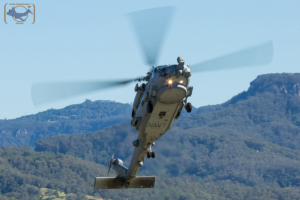 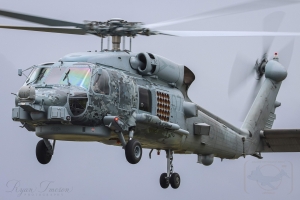