The Royal New Zealand Air Force (RNZAF) has deployed a C-130H Hercules from No.40 Squadron based at RNZAF Base Auckland and a 50-strong team to Europe to further support Ukraine against Russia’s invasion which is now in its seventh week since war broke out.

New Zealand Prime Minister Jacinda Ardern announced the deployment earlier in the week, with $13 million in further support including a contribution via the United Kindgom to procure weapons and ammunition.

“Our support is to assist the Ukraine Army to repel a brutal Russian invasion because peace in the region of Europe is essential for global stability,” Jacinda Ardern said

The C-130 Hercules (Serial: NZ7003) and crew are expected to begin transporting donated military aid bound for Ukraine from centres in Europe from next week. With the Hercules leaving RNZAF Base Auckland on the 13th of April with a crew of nine personnel on board.

The majority of the approximately 50-strong Air detachment will deploy independently to Royal Air Force Base Brize Norton in the United Kingdom in advance of the aircraft’s arrival, to start the preparations for the movement of donated military aid destined for Ukraine. 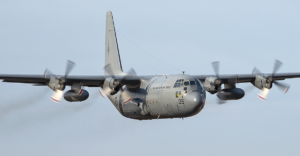 Once based at Brize Norton, the Hercules will begin flying between third countries in Europe, picking up donated military aid and transporting the cargo to destinations from where the stores can be taken by land into Ukraine, most likely Poland.

Additional support from N0.40 Squadron sees one of two Boeing 757-200 (Serial: NZ7571) used in the VIP and transport role loading equipment in New Zealand bound for The United Kingdom. 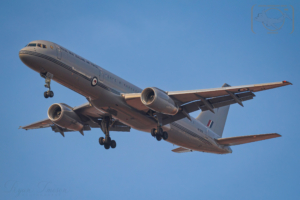 The movement of donated military aid around Europe is being coordinated by an international coordination centre in Stuttgart, Germany.

The New Zealand Defence Force is deploying a group of eight personnel, including New Zealand Army logistics personnel and RNZAF air liaison and air movements personnel, to work as part of the international team coordinating the logistics for donations, matching transport to aid consignments, as well as receiving, packaging, and arranging the onward transportation of military aid into Ukraine.

A three-person advance party is currently in the United Kingdom, where they are facilitating the arrival of the aircraft and assimilation of personnel into the Stuttgart coordination centre, before themselves travelling to Stuttgart later this week.

The deployment of the Hercules, air transportation and logistics personnel is in addition to the deployment of NZDF intelligence staff to the United Kingdom. As well, an officer is also being deployed to the UK Permanent Joint Headquarters, and a liaison officer will be working at a NATO headquarters in Belgium.

The NZDF’s open source intelligence capability is being utilised to take advantage of time zone differences between New Zealand and the United Kingdom.

A consignment of helmets, body armour, radios and other equipment was flown by military aircraft to Europe and delivered to Ukraine.

“It’s complex and the situation in Ukraine is changing almost daily. With the deployment of our air transport and logistics support, we’re working with purpose to get them established in Europe,  working alongside our partners, so they can get underway with transporting the large quantities of donated military aid to third countries, and to where it’s needed most, Ukraine.”

Commander of RNZAF base Auckland, Group Captain Andy Scott, was at the departure as the aircraft left the Air Force base in Whenuapai for Europe.

“We should never underestimate the value we can provide to partners with the contribution of a cargo aircraft and a team of professional, highly motivated service personnel. In situations like this airlift, logistics support and intelligence analysts are always key enablers and we are proud to be able to help,” he said.

Wing Commander Lisa D’Oliveira, the Commanding Officer for RNZAF No 40 Squadron, said the Squadron was excited to be sending a C-130 Hercules and detachment to support air transport operations in Europe.

“This will provide the opportunity for us to operate in a multi-national environment ensuring donor aid can be made available to support the Ukrainians,” she said.

The deployment of the Hercules and RNZAF detachment is for up to 60 days, while the logistics team has been deployed for up to 90 days, with the 757-200 going back and forth between New Zealand and Europe delivering the donated supplies.

Title for this article in Maori means “To the Four Winds” and is the motto for No. 40 Squadron, APD wish all the crews safe travels away from home and that they return safely to Aotearoa. 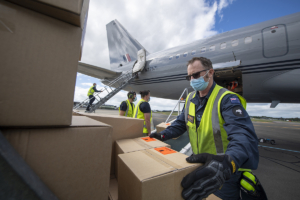 Boxes of helmets, armour plates and webbing are loaded onto an RNZAF Boeing 757 in order to help support the people of Ukraine.- RNZAF