The annual Rhode Island National Guard Open House Air Show was held the weekend of May 30 and 31 at Quonset State Airport in North Kingstown. This being the 23rd anniversary of one of the best shows in the Northeast, there was great weather and huge crowds. The show was fortunate to attract three major jet teams where most shows would be happy with just one. The three teams being the Canadian Forces Snowbirds, the Breitling Jet Team and the US Navy Blue Angels.

Saturday seemed the better day weather wise and attracted a record crowd of over 50,000, according to a local TV station. Sunday, with the expectation of rain, brought a smaller crowd, however the rain held off until the show ended.

The Breitling Jet Team from France, which operates L-39C Albatross jets, were on their first US tour. They brought their blend of technical ability, mastery and finesse to the New England skies. They showed off some unique maneuvers including the Apache Roll where a soloist performs continuous rolls around a formation of four jets. Their graceful performance ended with a display of pyrotechnics using flares. 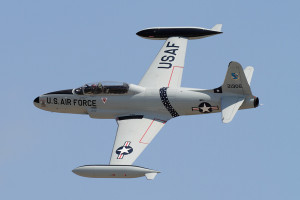 Gregory ‘Wired” Colyer brought one of his pristine Lockheed T-33 jets named “Ace Maker” to the show. He performed a fast paced demonstration including some very low level passes. The T-33 is a training version of the Lockheed P-80 Shooting Star which saw service. Gregory, is a commercial pilot and formerly served in the US Army.

The Geico Skytypers made the short hop over from Long Island, NY and performed their show with their 6 North American SNJ-2 trainers. Their demonstration showcased maneuvers, formations and tactics used during WWII.

There were four civilian aerobatic single ship demonstrations. Firstly, the very popular Sean D Tucker performed his fast paced extreme routine in his Oracle Challenger biplane. He flew his trademark triple ribbon cut inverted and then flew the plane backwards, straight down at more than 100MPH. At some point during his performance he got on the radio and talked the crowd through some intense maneuvers. Hard to believe someone could speak through some of those high G pulls.

John Klatt Airshows brought two aircraft to the show. The jet powered Waco was certainly a crowd favorite – as the name implies, it is a 1929 Waco biplane powered by a traditional radial piston engine plus a jet engine from a Learjet. Flown by Jeff Boerboon, it performed an entertaining routine with high speed climbs that no other Waco could hope to achieve. The other aircraft was an MXS, a world class aerobatic aircraft, capably flown by Lt Col John Klatt who has served in the Air National Guard for over 20 years.

New England aerobatic pilot Rob Holland brought his all carbon fiber MXS-RH aerobatic airplane to the show. This aircraft is capable of pulling 14 positive G’s and has an astounding roll rate of 500 degrees per second. Rob performed a thrilling routine demonstrating the capabilities of the aircraft.

Another civilian performer which is a huge favorite, especially amongst the younger air show fans, is the Shockwave jet truck. Shooting 40 foot flames out the back and billowing clouds of white smoke makes for a huge spectacle. The jet truck gets to perform a high speed run down the runway at speeds approaching 375 mph and easily beat the Jet Waco aircraft in a race.

Mark Murphy brought his P-51D Mustang “Never Miss” to the show. The Mustang is among the best and most well-known fighters used by the Army Air Force in WWII. Powered by a Rolls Royce Merlin V-12, Mark Murphy and the Mustang performed a thrilling demo each day. 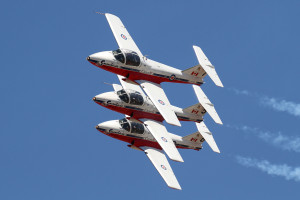 The Canadian Forces Snowbirds returned to Rhode Island to perform their 9 jet demonstration. They fly Canadair CT-114 Tutor trainer jets in their show. They featured some close, precision formations with crisp formation changes, creative crossovers and beautiful downward formation breaks. A very graceful performance overall. The Tutor jets are setup with two seats in a side by side configuration. Captain Avert Pyne who flies the number 2 jet, explained that the pilots who fly primarily on the right of the formation, sit in the left seat and those that fly on the left side of the formation pilot from the right seat.

One of the stars of the show was the Canadian Forces CF-18 demo which featured the beautifully painted CF-188 jet. The paint scheme designed by Jim Belliveau, commemorates the 75 anniversary of the Battle of Britain and is the latest in a series of very attractive demo jet paint schemes. Captain Denis “Cheech” Beaulieu performed an aggressive and skillful demo. This resulted in much vapor during the high speed and high G maneuvers.

The F-16 Viper Demo Team returned to the airshow circuit this year with Captain Craig “Rocket” Baker as the pilot. The team based out of Shaw Air Force Base in South Carolina flies the Lockheed Martin F-16C Viper. The demonstration was fast paced and featured plenty of afterburner and vapor. Captain Baker showcased the Viper’s exception maneuverability. At the end of the demo, Capt Baker joined up with Jim Beasley in a P-51 Mustang “Bald Eagle” for the Heritage Flight. The Heritage Flight program was founded in 1997 and featured modern fighter aircraft flying in close formation with World War II, Korea or Vietnam era fighters. The display serves to honor the brave women and men who have served or are currently serving in the USAF. 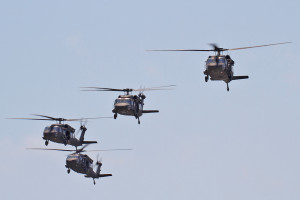 The US Navy Blue Angels were the headliners and they certainly lived up to their top billing. Firstly, “Fat Albert”, the C-130 cargo aircraft that carries the ground crew and their gear, performed their demonstration with maneuvers that are quite extreme for such a large cargo aircraft. Ending with a steep tactical approach and a very short rollout on landing.

The Blue Angels demonstration team then took to the skies and performed their typical exciting show which featured the graceful aerobatic maneuvers of the four jet diamond formation, combined with the high speed of the two solo pilots. They showcased the precise formation flying with 18 inch wingtip to canopy clearances on some formations. Under the leadership of Captain Tom Frosch flying in Blue Angel 1, the team performed a tight demonstration and represented the US Navy very well.

Kudos to the show organizers for putting on an action packed show with something for everyone.

Aviation Photography Digest would like to thank the RI Air Show Public Affairs Team for their assistance and professionalism. In addition, special thanks to the Rhode Island Army National Guard’s 1st Battalion – 126th Aviation Squadron for the media flight.