Another Red Flag exercise came to an end. From March 3rd to March 14th, 2014, Red Flag 14-2 took place at Nellis Air Force Base in Nevada. Red Flag, the most realistic combat training exercise in the World, takes place over the ranges of Southern Nevada, while using Nellis AFB as the main base of operations for most of the aircraft. Aircraft, maintainers, and support personnel from several branches of the U.S. armed forces combine with the air forces, and their support units, of allied countries to embark on the largest military exercise of this kind.  For Red Flag 14-2, the U.S. Air Force and the U.S. Navy teamed up with air forces from Belgium, Denmark, Saudi Arabia, and UAE. 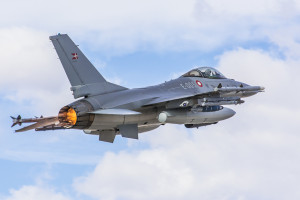 This Red Flag exercise concentrated heavily on the capabilities of the F-15 and F-16 fighters. From the state-of-the-art F-16 Desert Falcons of UAE and F-15S’s from Saudi Arabia, to the F-16 AM’s from Belgium and Denmark, a variety of F-15’s and F-16’s were represented. While lacking some of the more exotic aircraft that have participated in past Red Flag exercises, the pilots of the F-15’s and F-16’s showed why these aircraft are the mainstays of many air forces worldwide. In addition to the F-15 and F-16 aircraft, support was provided by aircraft such as the Boeing B-52 Stratofortress, Boeing E-3 Sentry, and Lockheed C-130.

The odds of a fighter pilot surviving in combat increase substantially after the first ten combat missions. Red Flag is designed to provide pilots with those first ten missions. The Red Flag exercises have evolved since they began in 1975. For Red Flag 14-1, a fictitious threat was created from a fictitious country with real-world combat scenarios that required strategy and tactical implementation. This combat scenario was extended to the maintainers and support units where limited time and resources emulated a combat environment. According to 1st Lt Chris Clements of the 547th Intelligence Squadron, the main storyline is carried over to other Red Flag exercises during the course of the year, but individual scenarios will be tailored based on the participating assets. As the days progress through the Red Flag exercise, the degree of difficulty also increases. According to the Commander of the 57th Adversary Tactics Support Squadron (ATSS), Lieutenant Colonel Jon Berardinelli, as Red Flag progresses, there are varying degrees of difficulty that the adversary (Red) forces can challenge the blue forces with. The degree of difficulty is determined by the Red Flag commanders based on the progress of the blue forces using a document called the Threat Matrix as a guideline.

Since 1975, another type of threat has evolved in which pilots, maintainers, and other support units have to be prepared for. This is the threat of electronic and cyber attacks. Cyber/electronic warfare prevention and preparedness are now part of the Red Flag exercises. In addition, Combat search and rescue (CSAR) has also been incorporated into the Red Flag exercise. This ties into what 1st Lt Chris Clements stated, that planners now look to “integrate all assets” during Red Flag, as you would during a real combat scenario, which, in this case, includes incorporating CSAR into the fictitious war. 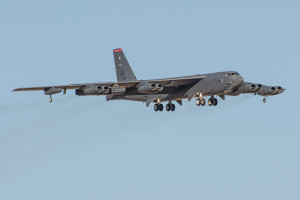 Red Flag is a large undertaking. According to Lieutenant Colonel Jordan Grant, the 414th CTS deputy commander, the blue forces for Red Flag 14-2 were comprised of approximately 104 aircraft from other parts of the U.S. and the world. During a typical Red Flag exercise, the visiting squadrons will spend the first Saturday familiarizing themselves with the airspace and the range in a non-hostile environment, and the first Sunday will be spent in briefings where pilots and support personnel will be familiarized with the procedures of Red Flag. After a long briefing early on Monday, the participants should be prepared for their first day of flying.

For aviation enthusiasts, the volume of activity can keep you busy observing and/or clicking the shutter. With good locations to photograph off-base, photographing at Red Flag can quickly fill a DSLR’s memory card. The highlights of Red Flag 14-2 were the UAE F-16E/F Desert Falcon’s, Saudi F-15S’s and the B-52’s from Barksdale, LA. It was also nice to see the air forces from Belgium and Denmark flying their F-16AM’s.

Red Flag is the largest exercise of it’s kind in the world. With the facilities, airspace, and ranges, Nellis Air Force Base has become, what Lt. Col. Jordan Grant stated, the “center of airpower excellence”. With this in mind, for aviation enthusiasts/photographers, this is one of those high yield exercises that should be visited at least once per year.

Aviation Photography of the West would like to thank the 99th Air Base Wing Public Affairs office, with a special “thank you” to A1C Monet Villacorte for managing the media through two Red Flag exercises scheduled very close together.