RCAF CF-18 Air Demo Team: The Hornet with a Sting

Story and Photographs by Barry Griffiths

One of the Quinte International Air Show’s featured performers, a brightly painted CF-18 Hornet, lined up at the end of the active runway as the huge crowd waited expectantly for it to launch into its signature take-off routine: a steep climb, followed by the “Dirty Roll”. Then, Capt. Ryan (Roid) Kean, the RCAF’s 2016 CF-18 Demonstration Pilot, quickly applied full military power to the twin GE turbofans, punched in the afterburners, and started his take-off roll. When he reached the precise speed of 170 knots, Capt. Kean yanked on the stick and immediately became airborne with nose up at 30 degrees. Seconds later he reached an altitude of 200ft and then, with the landing gear down, flaps lowered , and everything hanging out, he continued through 360 degrees of roll until the jet was once again rubber-side down.

With this awesome manoeuver completed, the CF-18 Hornet demo bird was set up to perform an amazing array of high and low speed aerobatics that would showcase the skill and professionalism of the Royal Canadian Air Force.

This spectacular launch and the aerobatics that followed were the result of many hours of high intensity training for Capt. Kean, a 1600 hrs instructor pilot from 410 Tactical Fighter “Cougars” (Operations/Training) Squadron.  In fact, his 2016 North American air show odyssey had begun in mid-November, 2015 when he was selected as the RCAF’s CF-18 Demonstration Pilot. In March, 2016 he started his training in earnest with a series of 21 simulator, dual pilot and solo pilot missions over a forty-five day period. An important feature of this training program was the role of the previous year’s demo pilot. Capt. Kean explained, “He initially runs my simulations and then sits in the back seat of my jet when I go up and do the routines. He’ll grade me on the trips and then, when I am cleared solo, he’ll stand on the ground and watch my routine. At the end of each mission we’ll review my tapes to look at each manoeuver to see if I can do any better and improve on it for the next day’s trip.”

Capt. Kean commented on how the manoeuvers of the air demonstration routine were selected and put together into a balanced performance. “It’s similar to the previous year’s program, with tweaks. All of our approved performance manoeuvers come from our CF-18 demonstration training manual which is approved at the Air Division level. This year’s manoeuvers are then taken from this manual and the show is built from that bank of manoeuvers.”  He also mentioned that the Air Demonstration Team is acutely aware of crowd safety and the demonstration has to fall within the guidelines of  both Transport Canada and the FAA.

He described how important the simulator missions were to his training program.  “As with most of my show routine, it’s all about speed. I get to sit in the simulator and practice hitting the speeds that I need to hit in each of these manoeuvers. When I am in the sim I look at the numbers rather than getting a feel for the aircraft. This is because I am always looking at numbers when I am flying the show routine; the simulator really helps with this aspect of the training. The other thing the simulator helps me with is practicing emergencies.  If I want to pull an emergency simulation, it’s possible to bring up an emergency I might have during the demo. This allows me to see how it might affect me and then I can practice dealing with it”. 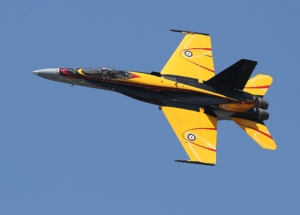 After being cleared for solo training flights, Capt. Kean then started his manoeuvers at higher altitudes and worked his way down to the show altitude of 300ft. When his training program was completed, but before the Demo Team took to the road and the skies, Capt. Kean performed his routine at CFB Comox, BC in front of Major-General Wheeler, the Commander of 1 Canadian Air Division.  The General signed off on the CF-18 Hornet’s demo routine and then approved the show for the 2016 season.

Maj Holly Brown, the Public Affairs Officer for the CF-18 Demonstration Team, made an interesting point when she told APD that, “The CF-18 Demonstration Team is special and I like to call us “the real deal” as we are the real operational side of the RCAF. We come together for a short period of time, from our respective operational locations across the country, to highlight the professionalism of the Canadian Forces and then we return to our bases. This CF-18 Demo Team gives the RCAF the opportunity to connect with Canadians and show them the real side of their air force.  We let them see what the CF-18 can do, its role in aerospace defence, and a chance to see the professionalism of its demo pilot and the crew that supports him.”

Each year the CF-18 Demonstration Team selects a theme and it was decided that 2016 would feature the 75th Anniversary of the British Commonwealth Air Training Program (BCATP) in World War II.  This year the CF-18 Demonstration Team is commemorating Canada’s greatest contribution to the Allied victory during the Second World War when 131,553 pilots, observers, flight engineers, and other aircrew were trained in 151 training schools across Canada. As a result, the demo Hornet was specially painted with a unique and stunning commemorative paint job at CFB Cold Lake, AB. Sgt Daniel Pare, the CF-18 east coast maintenance team crew chief, who has spent four show seasons with the Demo Team, told APD, “In my opinion, this year’s paint job is the best one I have seen.”

The jet features striking yellow wings, the colour of the primary aircraft used during the BCATP program, a black fuselage signifying the darkest days of World War II, and a red line for the “life line” the Canadian people made towards the war effort. In addition, the names of all of the communities who hosted a training centre are painted on the jet.

The CF-18 Demonstration Team has a heavy schedule of air shows during the 2016 season and will appear at 22 shows in Canada, 13 shows in the USA, plus many special visits to local communities, hospitals and schools.

Since this heavy schedule and demanding show program places a lot of stress on the demo CF-18 Hornet, a highly skilled team of RCAF technicians is assigned to the Demo Team and is an integral part of the operation. These maintainers are at the top of their game and they ensure the demonstration Hornet is always airworthy and in peak working order. Capt. Kean put things in perspective when he said, “Both the East Coast and West Coast maintenance teams are phenomenal and without them I wouldn’t have anything to fly.”

APD caught up with the East Coast crew, as they were completing their pre-flight routines and checks, and asked about the potential difficulties in keeping an aging aircraft in the air. As Cpl. Frederik Leclerc, the airframe technician, explained, “Our jet, up to now, has been really reliable and we haven’t had any big issues come up. This is likely because we are all very close to the plane; we complete regular inspections and look over it daily. The age of this plane is also not a factor as the parts and the software have been upgraded regularly. The CF-18 doesn’t break down any more often than before, but it is like your car, sometimes you have something pop up that needs fixing.”

He followed up by saying, “It’s an amazing experience for us because it’s like working on a racing car.”

Sgt Daniel Pare elaborated on this point when he told us, “We have to rely on having the parts available with us to fix any problems with the plane. If there is a problem we can’t repair, we call on the MRP (Mobile Repair Party) at our home base to fix it. The MRP would come to us and fix if it isn’t flyable or we can take the aircraft back to CFB Bagotville, QC for repairs”

The pride these highly motivated technicians have in their demonstration team role was obvious when Cpl Leclerc pointed out that, “The best part of the air shows for us is meeting the people. It’s beautiful! We are also able to explain to them what we do with the jet and “brag” about our job. They find out that we love our job and our first priority is to maintain our aircraft and put the tires on the ramp every show day.”

When two front-line fighter jets, the CF-18 Hornet and the F-22A Raptor, perform at the same show as they did at the Quinte International Air Show, it provides the pilots with a unique opportunity to compare notes and experiences. Capt. Kean mentioned this when he related that, “I have talked with Maj “Rock” Dickinson, the F-22 Raptor demo pilot, on multiple occasions and we have developed a friendship that we’ll have for many years to come. I was also lucky and fortunate enough to go to Shaw AFB where the USAF F-16 Viper Demo Team is based. I went up with “Rocket” (Maj. Craig Baker), the F-16 demo pilot, for his demonstration and it was a wonderful experience. It’s always nice to get into another fighter aircraft and see how its air show demo is flown and how the briefs and debriefs go. To experience the sheer power and manoeuverability of this aircraft was just great.”

The CF-18 Demonstration Team is a highlight of the North American airshow circuit and gives the RCAF and opportunity to show the real side of their air force.  If you get the chance to attend one of the air shows listed below you will witness first-hand the outstanding skills and professional qualities of the men and women of the Royal Canadian Air Force.

Click on a photo below to page or swipe through the gallery:

Barry can be reached at: [email protected]
Send this to a friend
SUBSCRIBE TO OUR NEWSLETTER
All rights reserved © Aviation Photography Digest, 2018
Subscribe to our FREE newsletter and get notified when new articles are published.
Subscribe
×
In order to provide you with the best possible experience on our website, we use cookies. If you continue to browse we will assume your permission to use cookies.I UnderstandRead more