A new perspective on travel with another middle eastern juggernaut arriving in Sydney.

Sydney Airport has welcomed a new airline, with Qatar Airways’ inaugural flight touching down in Sydney on the 2nd of March 2016.

Arriving as flight QR908 the Boeing 777-300 (A7-BAO) performed a missed approach and headed North making a right hand turn over Sydney Harbour performing a flypast of the iconic Sydney Opera House and Harbour Bridge at
2100ft before touching down just after 6pm to the delight of Qatar CEO His Excellency, Mr Akbar Al Baker and other passengers onboard. 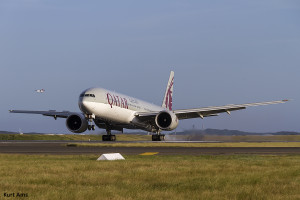 “It will also foster trade, providing greater air cargo capacity and access to the Middle East. Australian exports to Doha grew by 23 per cent last year, and the State of Qatar’s high demand for livestock, cereal, meat, dairy products and crops provides a significant opportunity for Australian exporters.”

The daily Doha-Sydney service will be operated on a 335-seat Boeing 777-300 aircraft, featuring the new Oryx One inflight entertainment system with more than 3,000 entertainment options on individual screens in all classes. In Qatar Airways’ award-winning Business Class, passengers will experience fully flat beds and an on-demand à la carte menu service allowing them to order anything from the menu at any time during the flight.

With a total of 335 seats (42 seats in Business Class in a 2–2–2 configuration and 293 seats in Economy in a 3–3–3 configuration). The Business Class Seats are fully flat-bed. In Economy Class, the seats offer a pitch of up to 34 inches and 10.6-inch TV screens, designed to offer optimum viewing. Both Business and Economy class cabins offer in-seat PC power supply.

“We are delighted to be able to offer passengers flying from Sydney the opportunity to connect to more than 150 places on our global network via our state-of-the-art airport in Doha. We look forward to taking the people of Sydney to the places they want to go on our modern aircraft, and giving them a taste of the Arabian hospitality and comfort which earned us the aviation industry’s most prestigious title of Skytrax Airline of the Year in 2015”.

He goes on, “I would like to personally thank Sydney Airport and city authorities for welcoming us and we look forward to strengthening our relationships with them and the people of Australia in the coming years as we all go places together.”

Mr Akbar Al Baker stated that Qatar’s flagship the Airbus A380 will service Sydney from June this year replacing the Boeing 777-300ER as part of a seasonal boost to its newly-introduced Sydney to Doha. “We will be operating an Airbus A380 during peak periods from June onwards”. Mr Al Baker says that the airline’s first Sydney-Doha flights are “fully booked”, and also teased the possible extension of its Australian network to another destination – most likely Brisbane – “in the not-too-distant future.” 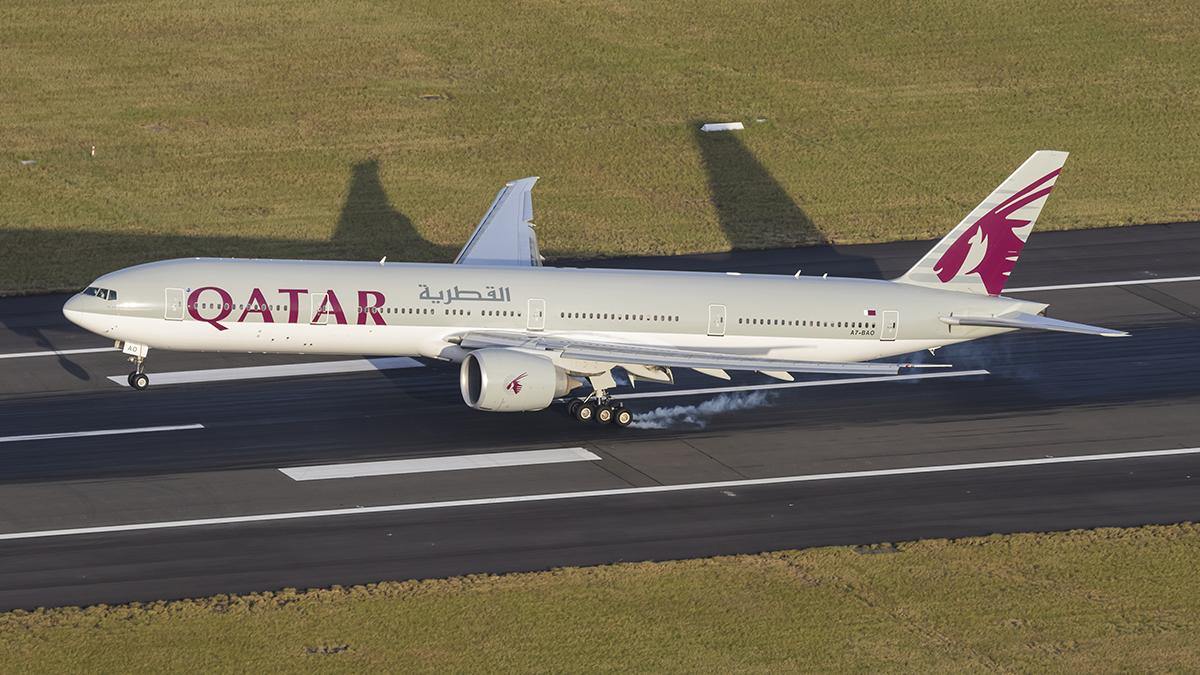 The superjumbo will offer travellers with it’s first class seating on offer and its latest generation of business class products, as well as an impressive inflight bar and lounge, giving its passengers and those flying with the Airline a new experience over other Middle Eastern giants such as Etihad and Emirates who both service Sydney with non-stop flights between their middle eastern hubs and Kingsford Smith Airport in Sydney.

Obviously, when additional airlines arrive, or existing airlines add routes to a city, it brings financial benefits for the cities and countries alike through tourism and trade. The State of New South Wales Minister for Trade, Tourism and Major Events Stuart Ayres said: “I am delighted to welcome the first Qatar Airways flight to Sydney which will provide a valuable increase in aviation capacity from the Middle East and greater connectivity to Sydney and Regional NSW, particularly for travellers flying from the United Kingdom and Europe via Doha. The NSW Government, through its tourism and major events agency Destination NSW, will be working in close partnership with Qatar Airways to promote travel to Sydney and the surrounding NSW regions from the United Kingdom and Germany”. 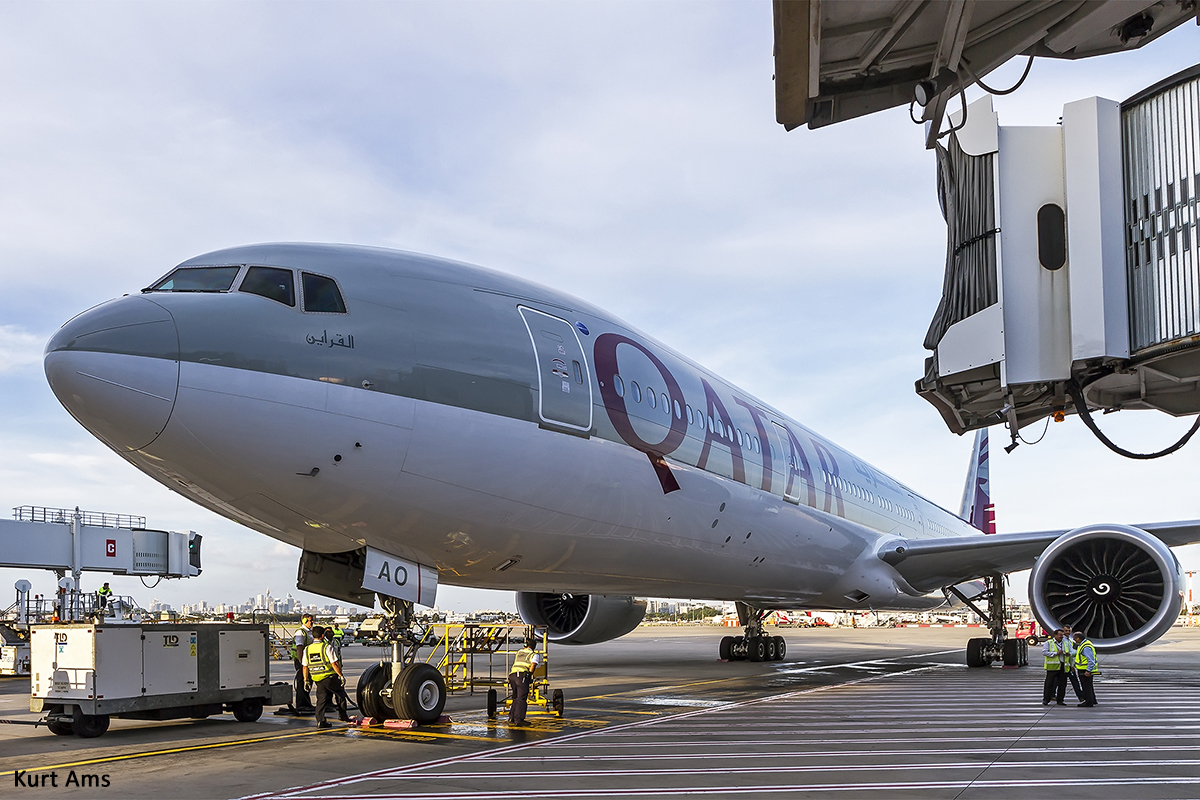 “Our State is Australia’s home of international travel and the NSW Government is committed to working with the aviation industry to increase air travel to Sydney via airline partnership agreements, Ayres added.”

Tourism Australia Managing Director John O’Sullivan also welcomed the airline’s arrival. “In recent years, we’ve seen the Middle East become an important aviation hub for international travellers wishing to fly on to Australia from some of our most important European markets, including the UK,” Mr. O’Sullivan said. “The launch of Qatar Airways’ new Sydney service provides air travellers with another convenient option to explore Australia and generate additional international expenditure for our tourism industry”.

Qatar Airways is one of the fastest growing airlines operating one of the youngest fleets in the world.
The airline is a member of the Oneworld global alliance, which includes airlines servicing Sydney such as Qantas, Cathay Pacific, American Airlines, British Airways, JAL, Malaysia Airlines and LAN.

But for the Aviation photographers who call Sydney home and those who visit Sydney flying with Qatar experiencing the best of inflight products, a new experience for Sydneysiders has just begun. 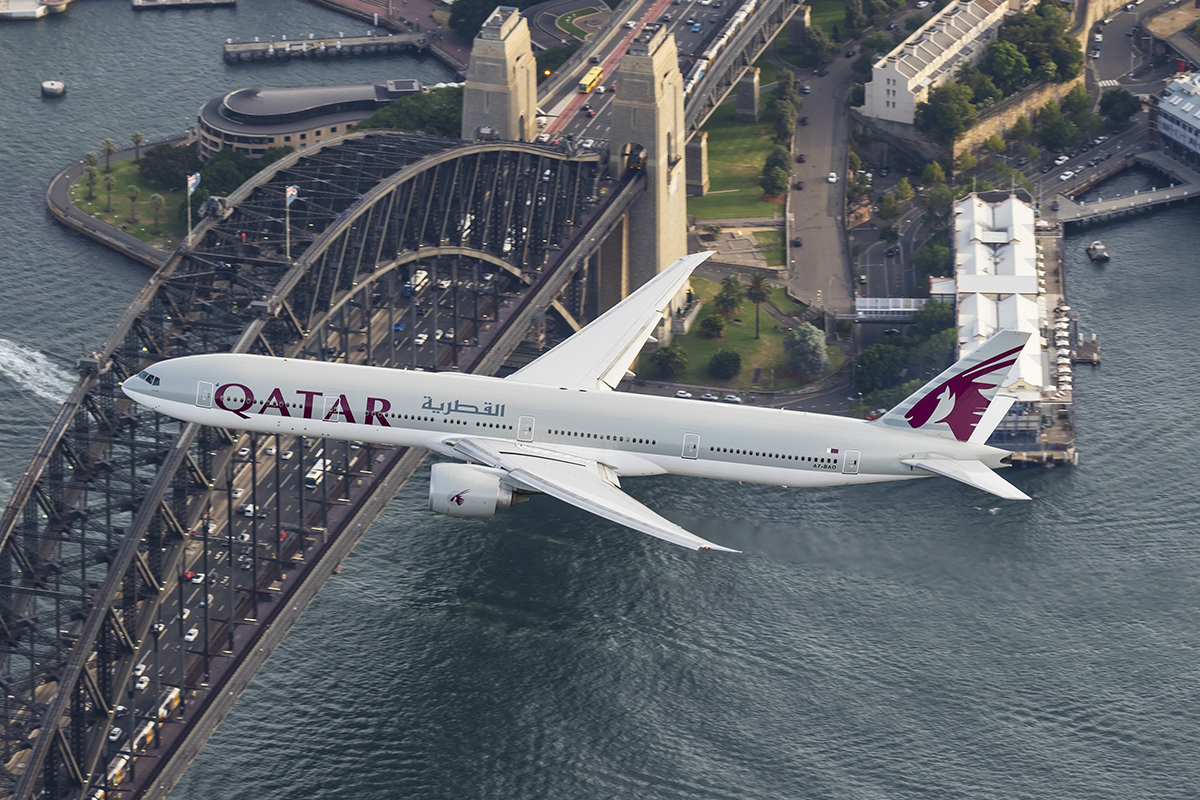 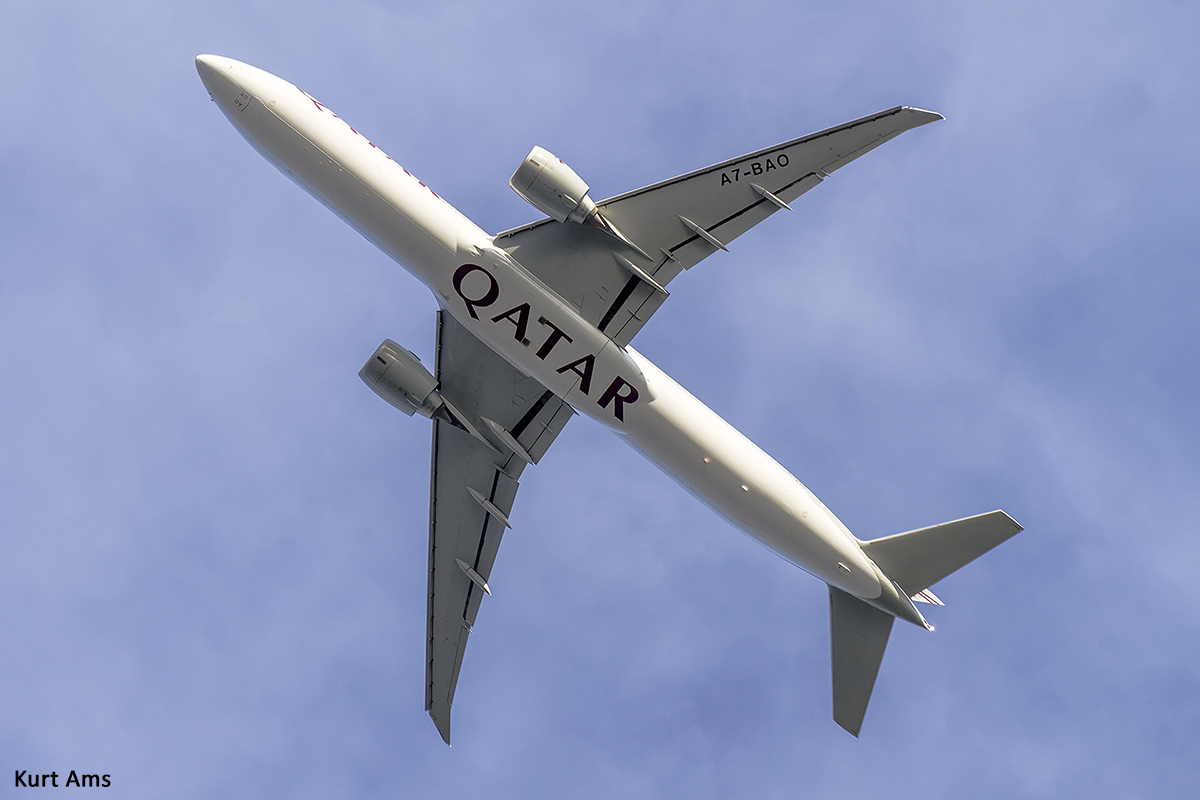 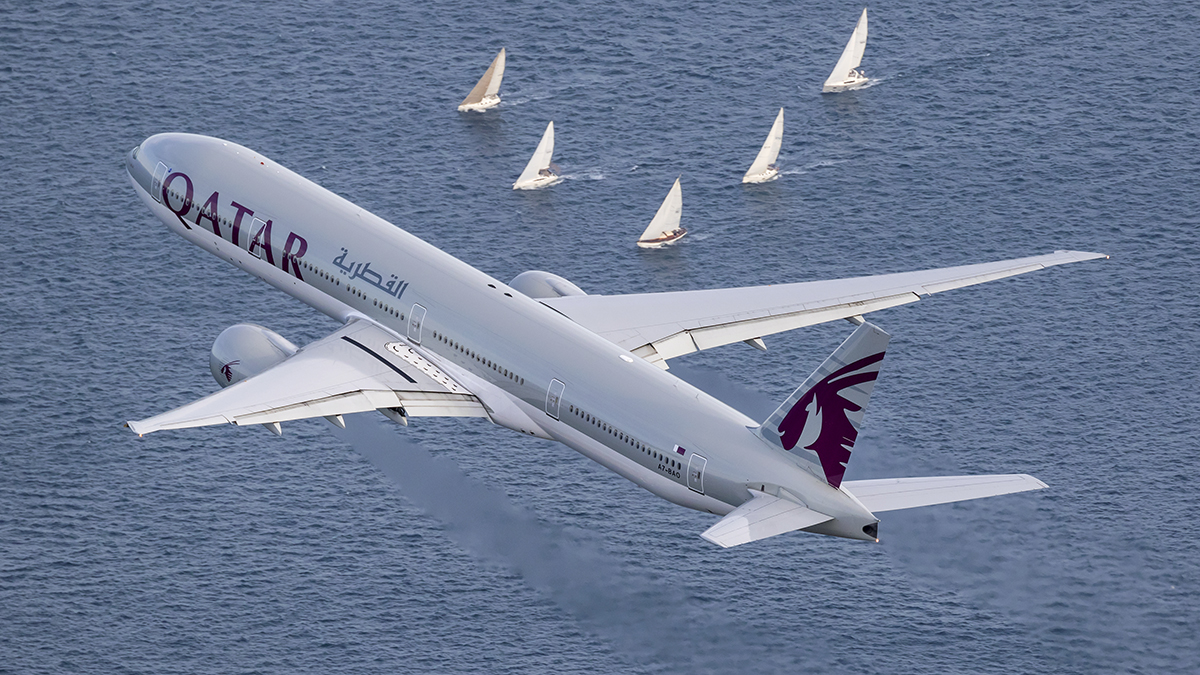 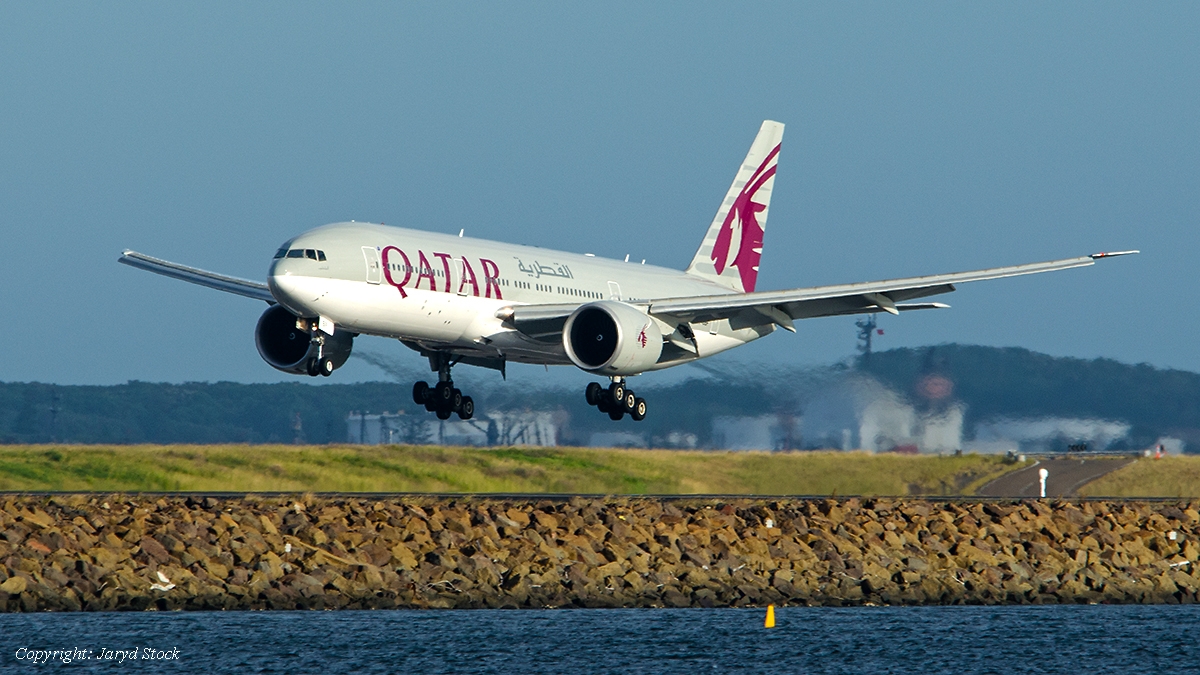 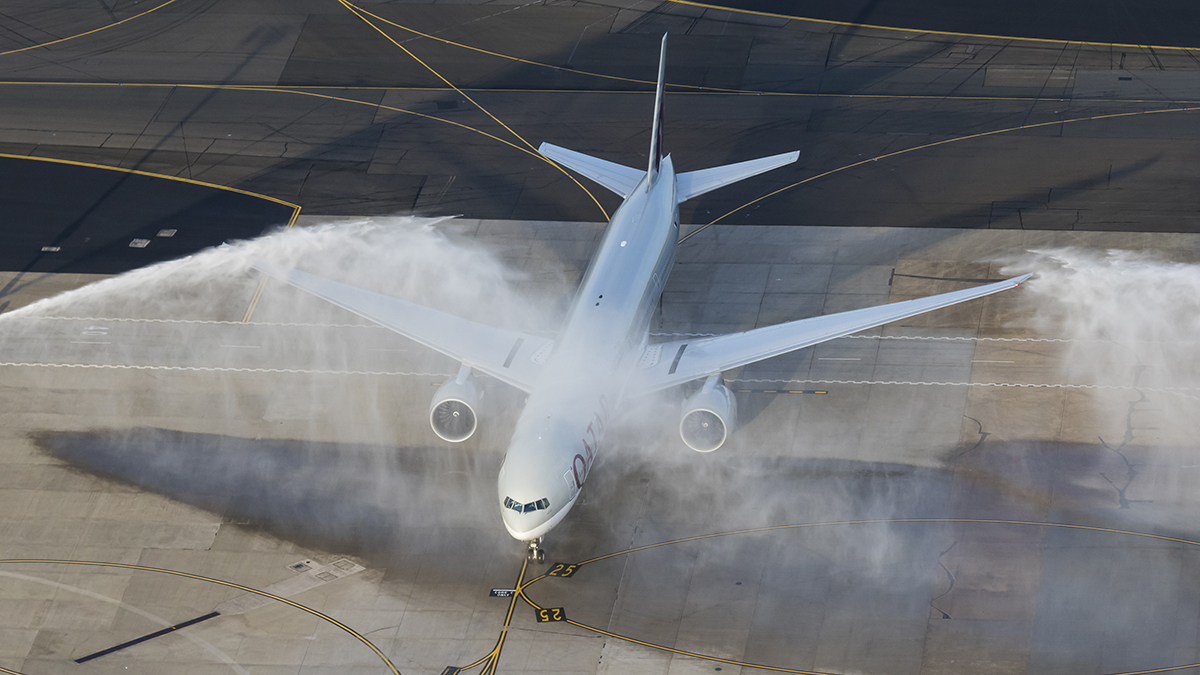 Jaryd picked up a camera at a young age and has never looked back. He now combines photography and writing to highlight "Downunder" aviation; especially U.S. DoD units. Jaryd uses Nikon cameras and lenses.
Send this to a friend
SUBSCRIBE TO OUR NEWSLETTER
All rights reserved © Aviation Photography Digest, 2018
Subscribe to our FREE newsletter and get notified when new articles are published.
Subscribe
×