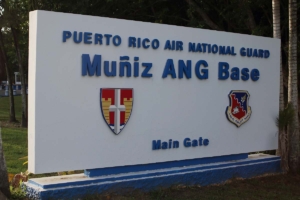 The Puerto Rico Air National Guard has a rich history of flying operations with the United States Air Force dating back almost 70 years. The 156th Airlift wing is based at Muñiz Air National Guard Base, Carolina Puerto Rico with the 198th Airlift Squadron which operates six WC-130 Hercules aircraft. The WC-130 can operate in less than ideal locations from rough, dirt strips and is the primary transport for air dropping troops and equipment into hostile areas.

The Puerto Rico Air National Guard traces its existence back to 1947 just as the US Air Force had become a separate military service. Led by Colonel Mihiel Gilormini, Colonel Alberto A. Nido and Lt Colonel José Antonio Muñiz, several officers were sworn in as members of the nascent Puerto Rico Air National Guard on October 26, 1947. The 198th Fighter Squadron and the attached units were federally recognized on November 23 1947.  The 198th started with 18 officers and 34 enlisted members organized as a unit under Captain Alberto Nido. The PRANG received 25 P-47 Thunderbolts and two C-47s (DC-3). All of the Air National Guard units operated P-47s between 1946 and 1955. Originally, post-World War II ANG units east of the Mississippi were to operate P-47s and those to the west were to fly P-51s. 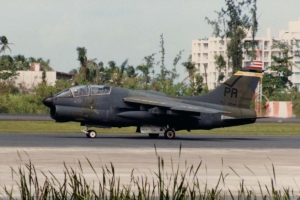 On November 15 1952, the 198th Squadron was redesignated as the 198th Interceptor Squadron. On April 10 1954 the squadron received its first T-33 trainers followed by their conversion to F-86 Sabres. The squadron was required to base their jets at the San Juan International Airport with the rest of its organization at Isla Grande Airport, which was still under construction. The short runways of Isla Grande Airport at the time did not allow for safe jet operations. The mission of the 198th Fighter Squadron was the air defense of Puerto Rico.  Several members of the 198th’s Flying Buccaneers broke the sound barrier in their F-86s, including Col. Alberto Nido, CDR. Mihiel Gilormini, 1st Lt. Peter Kryzanowski and 2nd Lt. José Bloise. On April 10 1958 the 198th Fighter Interceptor Squadron was upgraded to the F-86D day/night/all-weather version interceptors.

On October 15 1962 the Puerto Rico Air National Guard was designated Group status. The 156th Tactical Fighter Group was activated. The 156th was transferred to Tactical Air Command and the 198th became a Tactical Fighter Squadron, assigned to the 156th TFG. The 198th then received F-86H Sabre tactical fighters.  Other squadrons assigned to the group were the 156th Combat Support Squadron, 156th Material Squadron (Maintenance), 156th Headquarters and the 156th USAF Dispensary. During the Cuban Missile Crisis, all pilots were placed on alert and waited for orders while the crisis was solved in the nearby island. 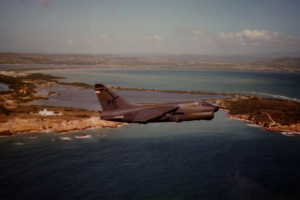 A PRANG A-7D flies a mission around the Island of Puerto Rico. Photo Julio A. Fuentes

In 1963 San Juan International Airport was renamed “Muñiz Air National Guard Base” during the 20th anniversary commemoration of its federal recognition. The renaming was in honor of Co-founder of the Puerto Rico Air National Guard, Lieutenant Colonel José Antonio Muñiz who was killed in the line of duty. He was lost on July 4 1960 when his F-86D lost power on climb out for a formation fly-by. Colonel Muñiz was a former United States Air Force officer during World War II who served in the United States Army Air Forces. Major General Orlando Llenza, who was a fellow aviator in the unit, later talked about the loss in the following translation.  “We were short one pilot and Joe (Muñiz) offered to stand in. I was formation lead. Right after departing the runway, his afterburner nozzles failed to open, indicating a loss of power. The ejection seats in use at the time could not safely eject a pilot at low altitude and Joe went in a little after takeoff. No one in the flight mentioned the event; we executed the flyover and were notified of the loss upon our return to base.”

Also in May 1963, the PRANG participated in the search for Mercury Astronaut, Scott Carpenter following his first orbital flight. Carpenter was located in his life raft, safe and in good health by Maj. Fred Brown under the command of the Puerto Rico Air National Guard. 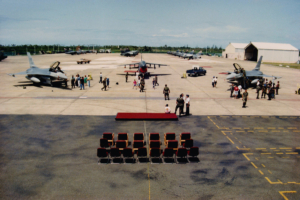 1992 was a very important year for the 156th Tactical fighter Group; a year of many changes due to the aircraft conversion. Photo Julio A. Fuentes

In March 1967, the 198FS deployed 5 F-86s to Howard AFB, Canal Zone, to participate in Exercise Cashew Tee III in Panama. A total of 117 sorties were flown by the Air National Guard in overcoming a simulated invasion. In April 1967 the 198th participated in exercise Clove Hitch III, a joint-service exercise, conducted in Puerto Rico with the Army and Air National Guard working together. The purpose of the joint amphibious and airborne training maneuver was to test tactical concepts in joint operation under simulated combat conditions.

Later in 1967 the 156th received F-104C Starfighters, upgrading the 198th FS to Mach-2 supersonic tactical fighter-bombers. The F-104C could carry bombs or rocket pods on under-wing and fuselage weapons stations. The F-104C retained the internal 20-mm rotary cannon from the F-104A as well as the ability to carry AIM-9 Sidewinder air-to-air missiles for air defense missions. Beginning July 13, 1967 and up until 1975, the 198th Tactical Fighter Squadron was the only Air National Guard Squadron to fly the tactical fighter version of the F-104 Starfighter. The Starfighters were transferred from active duty squadrons based in Thailand at Udorn Royal Thai Air Force Base. They had previously flown missions over North Vietnam. In 1975, the F-104s were finally retired from service. The 198th FS was the last USAF unit to operate the Starfighters.

In 1976 the 198th received the first of its A-7D Corsair II ground support aircraft, replacing the venerable F-104 Starfighter. Although the A-7 was primarily a ground attack aircraft, it also had a limited air-to-air combat capability. On January 12 1981 ten of the eighteen A-7s assigned to the squadron along with a single F-104 Starfighter which was to become a static display were damaged or destroyed by a group of homegrown Puerto Rican terrorists known as the Macheteros. After the incident, the Air Force and Air National Guard invested $5.5 million in Electronic Security Equipment, a Master Surveillance Control Facility, and added fencing to secure the flight line and operations area. In addition, Muñiz Air National Guard Base was provided security police manpower and civilian contract guards to bring the installation’s flight line and air base security up to a standard comparable to active duty air force bases in the continental United States. In 1991, the unit took part in exercise Granada South, Panama, and deployed to Iquique, Chile for Condor II Exercise. In August 1991 they deployed to Asunción, Paraguay with the Paraguayan Air Force for training. 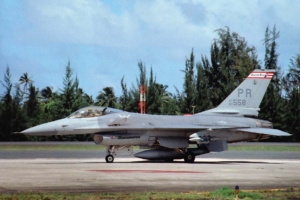 80-558 is taxiing to his parking spot for final inpections before take off. Photo Ed Rivera

the Continental Air Defense mission. F-16ADFs were standard Block 15 models that were converted to air defense fighters for the Air National Guard. They took over the fighter interception mission, which provided for the primary defense of North America against both bombers and cruise missiles.

In March of 1992, with the close of the Cold War, the 156th was re-designated as the 156th Fighter Group. The same year, on June 1st, Tactical Air Command was inactivated as part of Air Force Reorganization. It was replaced by Air Combat Command (ACC). From February 20 through March 6 1993, the unit took part in the “Caminos de Paz” exercise at Golfito, Costa Rica, then deployed from August 12-21 1993, to Asunción, Paraguay, marking its first F-16 Deployment. On October 1 1995, in accordance with Air Force policy of “One Base – One Wing” policy, the 156th was upgraded to Wing status; the 198th Fighter Squadron was assigned to the new 156th Operations Group. The wing then deployed to Brazil from October 21-30 1995 in support of Operation Tiger II. This was the first time U.S. Forces had deployed to Brazil since World War II. 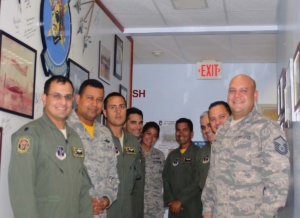 When an air wing deploys, they don’t just fly the aircraft to their temporary location. Aircraft maintainers also make the trip to ensure all of the aircraft are constantly ready for their missions. Pilots owe a lot to the maintenance personnel as they would not be able to fly the aircraft and feel safe doing so without the expert crew of professional maintainers. The head maintainer of the aircraft is called the “Crew Chief”. The crew chief coordinates the aircraft’s care and will call in specialists when they find a problem. The crew chief takes full responsibility for any work that is needed on his aircraft and is the last to sign off Most times you will find the name of the crew chief and assistant crew chief somewhere on the airframe. These men and women have more to do with keeping the planes up and flying than do the pilots.

In February 1997, the 156th Fighter Wing Mobility Exercise was conducted at Roosevelt Roads, Ceiba. 80% of its personnel were mobilized to conduct dramatic war time situations. From March 19-22 1997, the 156th Fighter Wing Operational Readiness Inspection was held at Roosevelt Roads. On November 22 1997, Muñiz Air National Guard Base received its first C-130s during the celebration of its 50th federal recognition Anniversary. 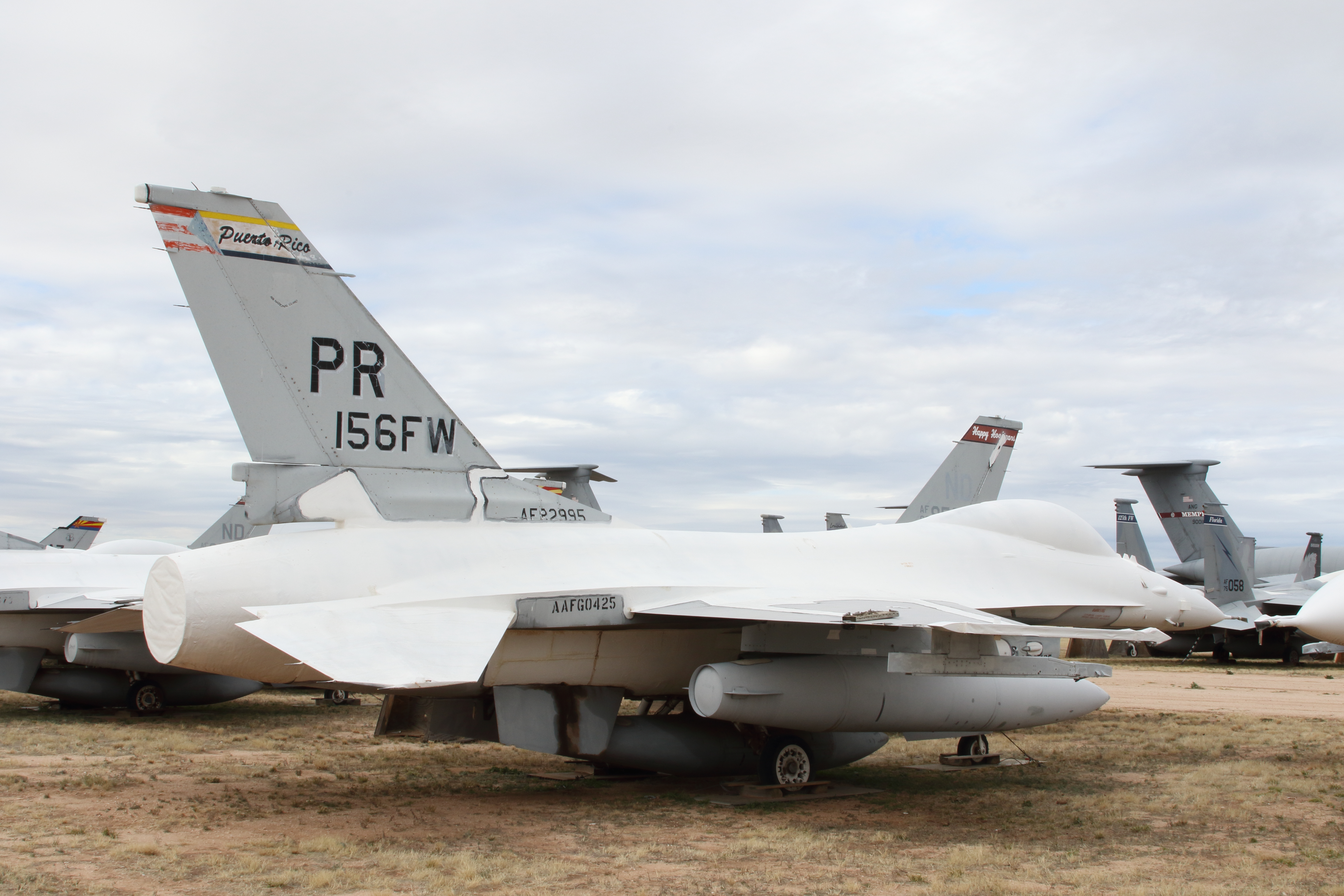 Many of the PR ANG F-16s were sent directly to the 309th Aerospace Maintenance and Regeneration Group (AMARG) in Arizona where they remain to this day. The airframes can be put back into service if needed or parts of them may be used to replace damaged or worn out parts on other F-16s. Some may even end up reconfigured as a QF-16 to be used as a manned/unmanned aerial target. 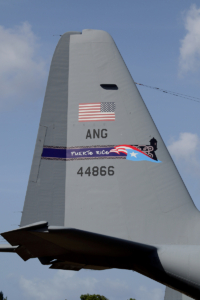 A PRANG WC-130 wears a new tail band. The band consist of the fort EL MORRO with the word Puerto Rico and the Puerto Rican flag in red white and blue. photo Ed Rivera 7-28-16

Beginning in June 1999, the primary mission of the Wing became support of Operation Coronet Oak. Air National Guard C-130 aircraft, aircrews and related support personnel deploy from the United States to Muñiz AGB providing theater airlift support for the U.S. Southern Command. The primary mission is to deliver Special Forces to any location in theater as directed by Southern Command. One C-130 is on alert 24/7/365 for that contingency. Coronet Oak shares the Muñiz flight line with the Puerto Rico Air National Guard, which also flies C-130s. The mission also includes any other kind of contingency and logistics support. Aircrews provide theater mobility, embassy support and airdrops. Along with their federal reserve duties, as commonwealth militia units, the elements of the Puerto Rico ANG can be activated by order of the Governor to provide protection of life and property, and preserve peace, order and public safety. Commonwealth missions include disaster relief in times of earthquakes, hurricanes, floods and forest fires, search and rescue, protection of vital public services, and support to civil defense. The unit also supports missions which fly people, food and mail. 2017 will mark the 70th anniversary of the Puerto Rico Air National Guard which has been an asset to the United States Air Force.

Photojournalist at Aviation Photography Digest
Born in New York, NY, Ed moved to Puerto Rico when he was 9 years old. It was in Puerto Rico where Ed's love for military aviation began. Watching the A-7's of the Puerto Rico Air National Guard (PRANG) inspired Ed to take up aviation photography in 1989 with a small point-and-shoot camera.

Before the retirement of the F-14 Tomcat, Ed had multiple air-to-air photo shoots with the Tomcats of NAS Oceana. He has also covered many Red Flag exercises at Nellis AFB.

Ed can be reached at [email protected]
Send this to a friend
SUBSCRIBE TO OUR NEWSLETTER
All rights reserved © Aviation Photography Digest, 2021
Subscribe to our FREE newsletter and get notified when new articles are published.
Subscribe
×