THE ERA OF WIDE-BODIED TRI-JETS COMES TO AN END

THE ERA OF WIDE-BODIED TRI-JETS COMES TO AN END

On October 25, 2014, two KLM Royal Dutch Airlines McDonnell Douglas MD-11 aircraft flew from Toronto and Montreal, Canada and touched down at Schiphol Airport in Amsterdam, Holland. These flights marked the last revenue flights for PH-KCB (Maria Montessori) and PH-KCE (Audrey Hepburn), the only two MD-11s in the world that were flying regularly scheduled passenger flights. After 20 years of KLM scheduled service with their ten MD-11s, the arrivals of these two “tri-jets” in Holland marked the end of an era and consigned the wide-bodied McDonnell Douglas MD-11 to a footnote in aviation history.

The McDonnell Douglas MD-11 was the successor to the Douglas DC-10 which entered service in 1971 and had its final commercial passenger flight in February, 2014. In its original concept it was designed to be a bigger and more robust DC-10 for the medium and long haul markets. Although the MD-11 appealed to its passengers because of its spacious, comfortable cabin and exceptionally smooth ride, it was not a commercial success. In fact, after its introduction in 1990, only 200 MD-11s were ever built over its brief 11 year production run and only 138 passenger versions were actually delivered. Since the company needed to sell almost 400 versions to break even, this sales disaster eventually forced McDonnell Douglas to merge with Boeing in 1997.

When the early MD-11s entered revenue service, operators were faced with an aircraft that did not live up to its performance hype. A major knock against the MD-11 was that it had safety issues related to its handling characteristics. In their efforts to improve fuel efficiency, McDonnell Douglas designers had moved the center of gravity much further back, than was usual in other commercial aircraft, and made it famously hard to land and take off particularly in a crosswind situation.  Five of the eight hull loss MD-11 accidents occurred during the landing phase forcing its operators to introduce special training for their pilots.

Airlines which had bought the passenger version earlier in its production run became frustrated with the performance shortfalls and started to bail out. American Airlines was unhappy with its 4%-over-specs fuel burn, plus unexpected aerodynamics problems.  The lack of range and payload restrictions of the MD-11s prevented Singapore Airlines from using them on their long haul routes and so its order for 20 aircraft was cancelled.  By the end of 2004, most of the airlines who had ordered the MD-11 had replaced it with the more capable B-777, A330 and A340 aircraft. 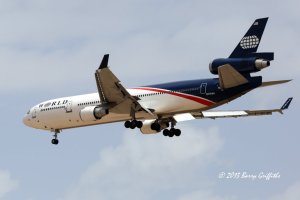 In an apparent lack of foresight and understanding of the aviation dynamics and economic downtrend that were in play at the time, McDonnell Douglas went ahead and introduced the MD-11 at a time when the commercial jet aviation landscape was changing dramatically and comparable aircraft like the Boeing 777, Boeing 767, Airbus A330 and A340 were being heavily marketed. Although, most of the MD-11’s problems had been resolved by the mid-nineties, its image had been irreparably damaged, its sales had plummeted, and it was clearly outmatched in all categories by its twin-engine competitors.

Ironically, the Boeing 777, which was designed and produced by the company that had bought out the struggling McDonnell Douglas entity in 1997, was the main reason the MD-11 sales tanked.  It could fly farther, with more passengers, and was significantly more fuel efficient and reliable than its tri-jet competitor.

Although Boeing had originally decided to continue producing the MD-11F freighter version, by 1998 it did an about turn and ceased its production after filling all of its current orders.  The last passenger version was sold to Sabena Airlines in 1998 and the last of the 53 freighters was delivered to Lufthansa Cargo in 2001. Since then, the all-cargo MD-11F continues to be operated by FedEx, UPS, and Lufthansa Cargo and others. 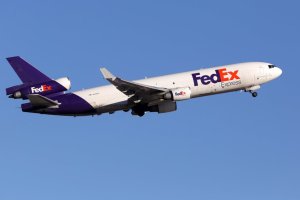 The MD-11 program was not only rife with major technical flaws but was also the victim of terrible market timing. It never recovered and now with KLM ceasing MD-11 operations the passenger versions have lost nearly all of their value and are only useful in providing spare parts for the remaining aircraft still flying. This controversial aircraft, despite all of its problems, was really appreciated by passengers and aviation enthusiasts alike, although pilots who experienced instances of inadvertent white knuckle flying operations are not likely to be as unhappy with its removal from service. Whatever their reactions it’s clear now that, with the retirement of KLM’s MD-11s, the wide-body, tri-jet era is truly over.

Barry can be reached at: [email protected]