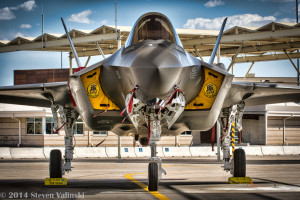 On March 31, 2015 the 56th Fighter Wing out of Luke Air Force Base in Arizona reached the 1000-sortie milestone in the Lockheed Martin F-35 Lightning II. The 56th FW is the fastest F-35 wing in the U.S. Department of Defense to reach this milestone. The sortie was flown by Maj. Joshua Arki of the 61st Fighter Squadron.

This is the second F-35 milestone Luke AFB has reached recently. Last week, Luke’s first F-35 student sortie was flown. The student that flew the sortie was none other than the 56th FW commander, Brig. Gen. Scott Pleus who is transitioning from the F-16 to the F-35. This training sortie signified an important step toward Luke’s mission of training the world’s greatest F-35 fighter pilots. Luke has already been training pilots on the F-16 Fighting Falcon since 1983. 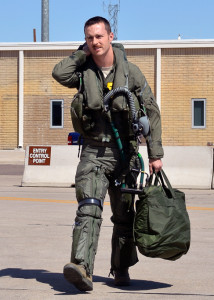 Brig. Gen. Scott Pleus had this to say: “I’m extremely proud of the extraordinary work our maintainers are doing to ensure our pilots have mission ready and safe jets. The F-35 is going to be the backbone of the Air Force’s fighter fleet for decades to come and Luke will play a vital role in producing the world’s greatest, most lethal F-35 pilots. With initial operational capability scheduled to occur late next year, it’s important that we get our training program and process dialed in and as efficient and refined as our F-16 training program is so we can help meet the Air Force’s scheduled goal.”

Presently, there are 20 F-35’s assigned at Luke. Two of these belong to an F-35 partner nation, the Royal Australian Air Force.

The first official class of F-35 student pilots is scheduled to begin at the Academic Training Center, a 145,000-square-foot two story state-of-the-art training center, in May.

Currently, the 61st Fighter Squadron is the only F-35 squadron at Luke and includes partner nation Australia. The 62nd Fighter Squadron is expected to stand-up in June, to be joined by partner-nations Italy and Norway. Flight operations for the 62nd are scheduled to begin in September of 2015. Other partner-nations that will be joining the U.S., Australia, Italy, and Norway in the F-35A training program at Luke will be the Netherlands and Turkey, in addition to Foreign Military Sales countries Japan, Korea and Israel.