Photos by Paul Negri and Steven Valinski (unless noted)

Lasting a month, ending on August 30th, Holloman AFB was the host of the USAF’s Light Attack Experiment, sometimes referred to as as OA-X. 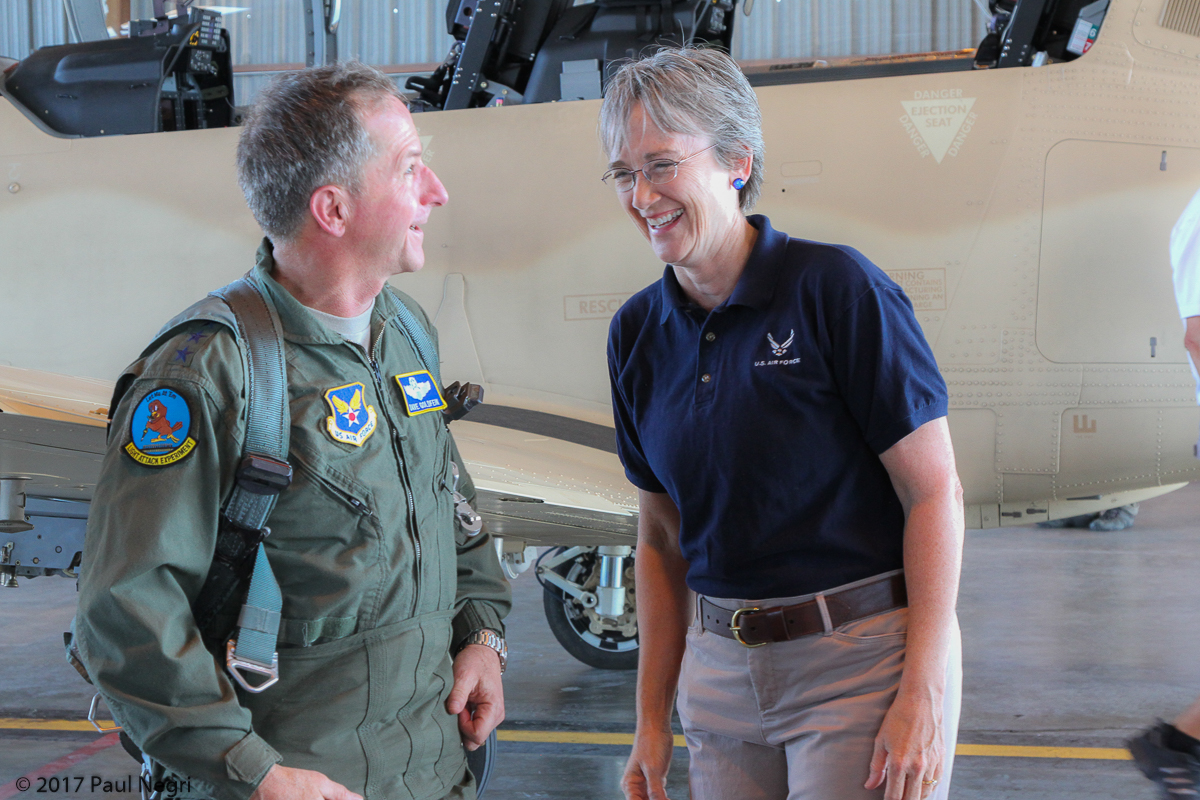 The Light Attack Experiment was not a competition or “fly off” but an experiment to see if some “off the shelf” aircraft in the present market could fill some of USAF needs in situations where the environment permits. Simply put, experiment equals learning.

“It’s also about how we do things; we are looking for new ways to do business, new ways to get ideas from the lab bench to the flight line faster, new ways to get capabilities to Airmen who need them today and can’t wait two or three years for a normal acquisition process and the way they were forced to do things in the past,” Wilson added.

Air Force Chief of Staff Gen. David L. Goldfein had this to say, “This experiment is about looking at new ways to improve readiness and lethality.”

“Working with industry and building on the Combat Dragon series of tests, we are determining whether a commercial off-the-shelf aircraft and sensor package can contribute to the coalition fight against violent extremism. I appreciate industry’s willingness to show us what they have to offer,” Goldfein added.

When one thinks of the word “attack” with military aircraft the A-10 Thunderbolt II ‘Warthog’ often comes to mind. For this reason many ask if the Light Attack Experiment is a method to seek a replacement for the A-10. The answer is “NO.” While a light attack aircraft can replace some of the A-10’s missions under certain conditions, the USAF sees a need for a lower cost platform to perform certain missions in permissive environments. With operating costs of an A-10C at $5,944/hr., F-16C at $8276/hr. and F15C at $23,124/hr., if an aircraft can perform some of the missions these aircraft perform at a much lower operating cost, it’s easy to see the USAF’s rationale for this experiment.

Another advantage of light attack is aircraft availability and maintenance downtime. In a recent article, Col. Mike “Starbaby” Pietrucha, who on staff at Air Combat Command and is at Holloman AFB for the experiment mentions that as of August 21st, “With over 100 experiment and training sorties flown, we have lost only three sorties to maintenance issues (all very minor), an availability rate that legacy jet fighters can’t come close to.”

Gen. Mike Holmes, commander of Air Combat Command told reporters, “We are going to continue to fly missions in support of both U.S. ground forces and coalition ground forces to fill in the gaps. We want to find a way to do it effectively, and in a way we can afford and in a way that won’t get in the way of us trying to regain our readiness in that most complex threat environment.”

A key advantage to “off the shelf” aircraft is that they are already through the development and operational testing phases and some of these aircraft are already fully-operational and combat proven in use with other countries.

The aircraft that participated in the USAF’s Light Attack Experiment were: the Textron Scorpion, Beechcraft AT-6 Wolverine, Sierra Nevada (SNC) A-29 Super Tucano and the L3 AT-802L Longsword. 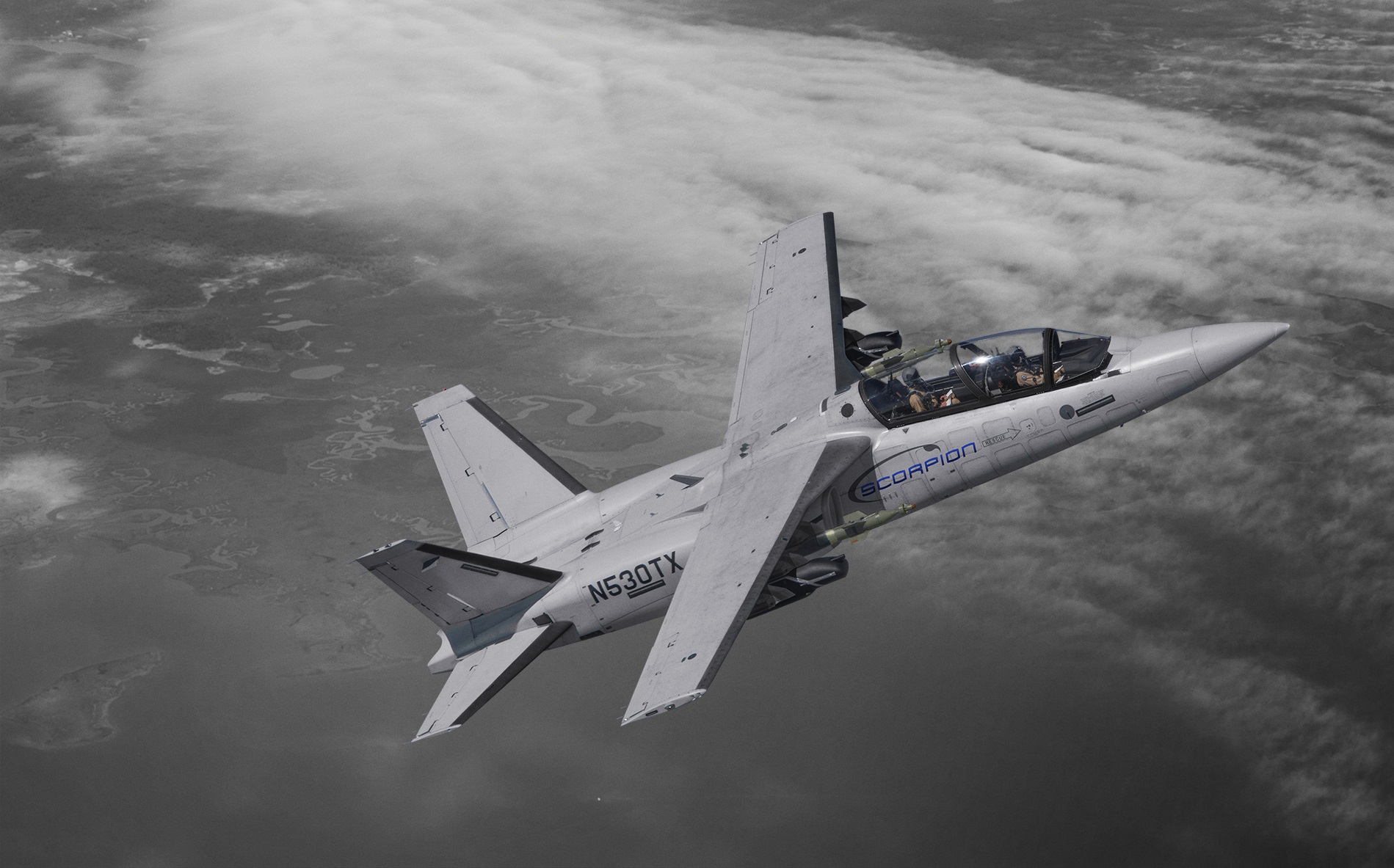 The only jet that participated in the experiment, the Textron Scorpion has the advantages of speed and payload capacity. According to Textron, “with the ability to get to an escalating situation quickly – yet can maneuver at much lower speeds, if the mission requires it. Quickly reconfigurable, Scorpion’s interior payload bay is provisioned for sophisticated ISR systems. Plus, Scorpion is capable of employing a variety of weapon sets, including precision guided munitions (PGMs) for precision strike.”

With a service ceiling of 45,000 ft., a max speed of 450 KTAS, six hardpoints capable of integrating a variety of weapons systems, payload bay, open architecture and its ability to be customized for such operations as taking on fuel mid-air, Textron feels it has a smart, fast and lethal jet.

More information about the Scorpion Jet can be found HERE 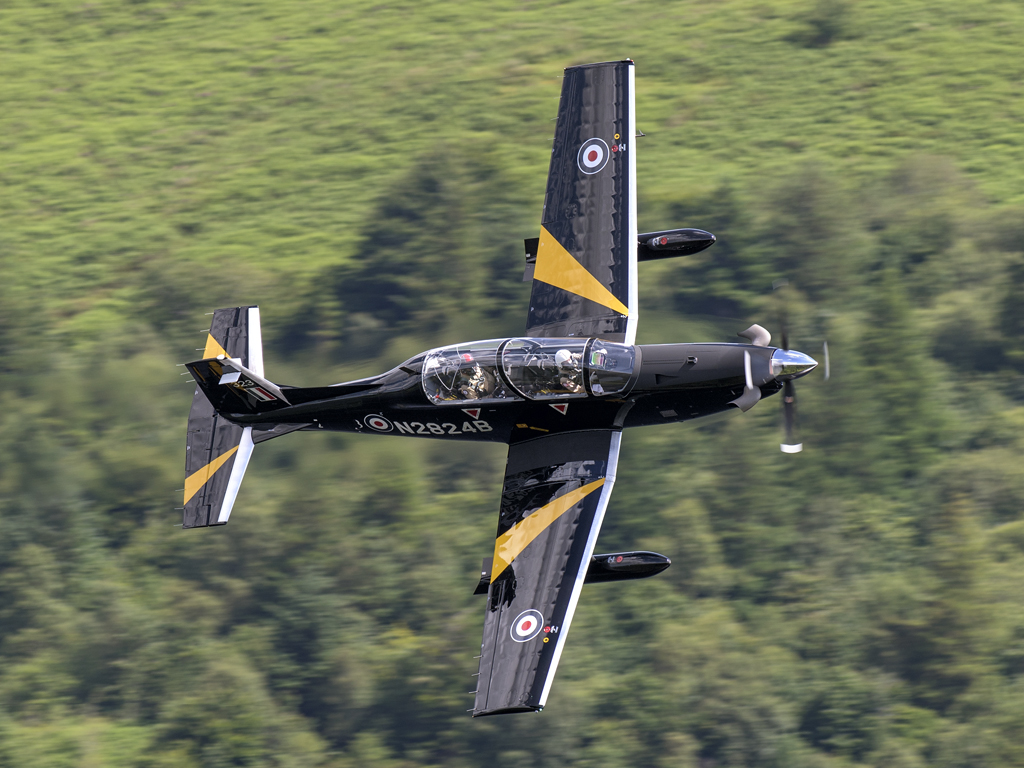 Technically another Textron offering, the AT-6 Wolverine has the foundation of the reliable T-6 Texan II turboprop with, among other things, upgraded avionics (including a Lockheed Martin A-10C mission computer), a reinforced structure and a more powerful engine.

According to Beechcraft, “The AT-6 outperforms the competition and provides a full suite of synchronized ground-based training capabilities as well as an established global logistics infrastructure. It is purpose-built for light attack, armed reconnaissance and counter-insurgency missions. The AT-6 leverages millions of investment dollars in the U.S. Air Force’s T-6, A-10C and MC-12 platforms. This translates into lower cost and makes the AT-6 available at a fraction of the acquisition, sustainment and training costs of more traditional combat aircraft.”

More information about the AT-6 Wolverine can be found HERE 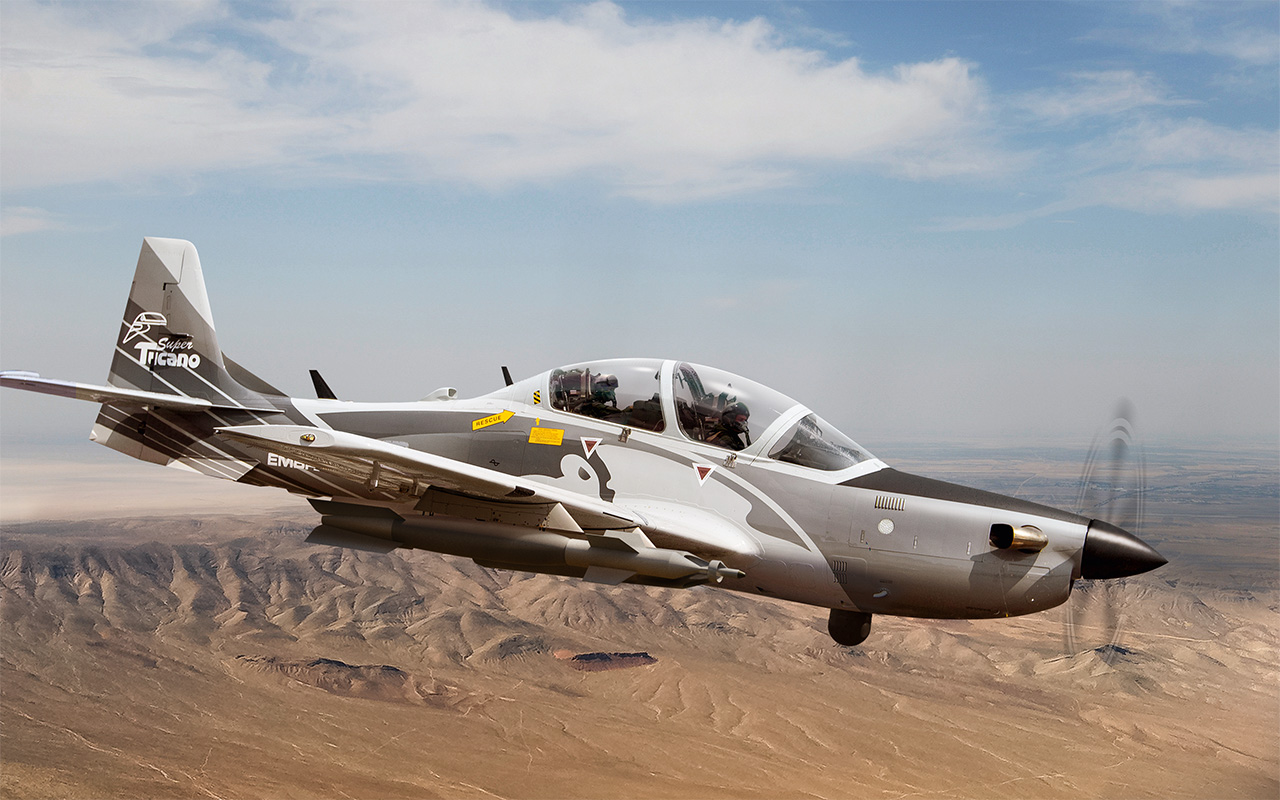 Based on the Embraer EMB 314 Super Tucano, the A-29 is the most combat proven aircraft in the experiment. The A-29 is flown by air forces in countries such as Chile, Columbia, Ecuador, Indonesia, Afghanistan and more. The A-29 has been in operation for over 12 years with thousands of combat flight hours. Presently, U.S. pilots and maintainers are training counterparts from Afghanistan at Moody AFB to operate and maintain the A-29.

According to Embraer, “The end of the cold war gave rise to new threats, which were previously dormant and which could not always be satisfactorily dealt with through high-performance vectors. This was particularly true in regard to territories with extensive and relatively porous borders.”

“Embraer kept these aspects in mind in the development of a radically new aircraft, ideally suited to deal with current and future military fight training requirements and also deployable in scenarios that do not fit high-performance combat aircraft. Named the Super Tucano, this new multi-purpose military turboprop aircraft embodies features guaranteed to make it as legendary as its predecessor, the Tucano, a favorite of so many air forces throughout the world.”

“Partnering with Embraer, we’re proud to present the U.S.-made, combat-proven A-29 as part of this experiment,” Gilbert added.

A late addition to the experiment, the L3 AT-802L Longsword is based on the Air Tractor AT-802U. The AT-802L’s strengths are its proven ruggedness and durability combined with its endurance in certain configurations.

According to L3, “Drawing on a 50-year heritage of rugged, reliable, and cost-effective made-for-the mission aircraft, the AT-802 Series is a versatile aerial solution for managing evolving security environments. From illegal border crossings, narcotic-trafficking and wildlife poaching to food security and wildfires — the AT-802 Series provides unrivaled versatility, performance and value. The AT-802L Longsword was developed by the companies to satisfy partner nation requirements. Longswords are currently in service with a partner nation and dozens of legacy Air Tractors are supporting light attack and surveillance missions elsewhere.”

In less than five months, what began as an idea, evolved into the USAF’s Light Attack Experiment. If the experiment shows that one or more of these aircraft can fulfill the needs of the USAF, a combat trial is the next step. This would involve utilizing the aircraft in combat situations, most-likely in the Middle East, sometime in 2018.

The Light Attack Experiment is a step in the right direction for the USAF. Innovation requires quicker adoption and implementation of new technologies. Recent defense authorization bills passed by Congress have opened the doors for the USAF to take new approaches to acquisition and procurement. As Secretary of the Air Force Heather Wilson stated, “We can’t just stand back, set out requirements, do analysis of alternatives, spend five years figuring out exactly what we want, put out an RFP, throw it over the fence, and take ten years to develop new technology because the adversary is innovating faster than we are.”

In the meantime, the results and observations of this this month-long experiment will determine if any of these out-of-the-box solutions can take on certain missions effectively with a substantial cost savings over traditional attack/fighter aircraft. The experiment itself provided a low cost way to do something vital to the future of the USAF….LEARN. 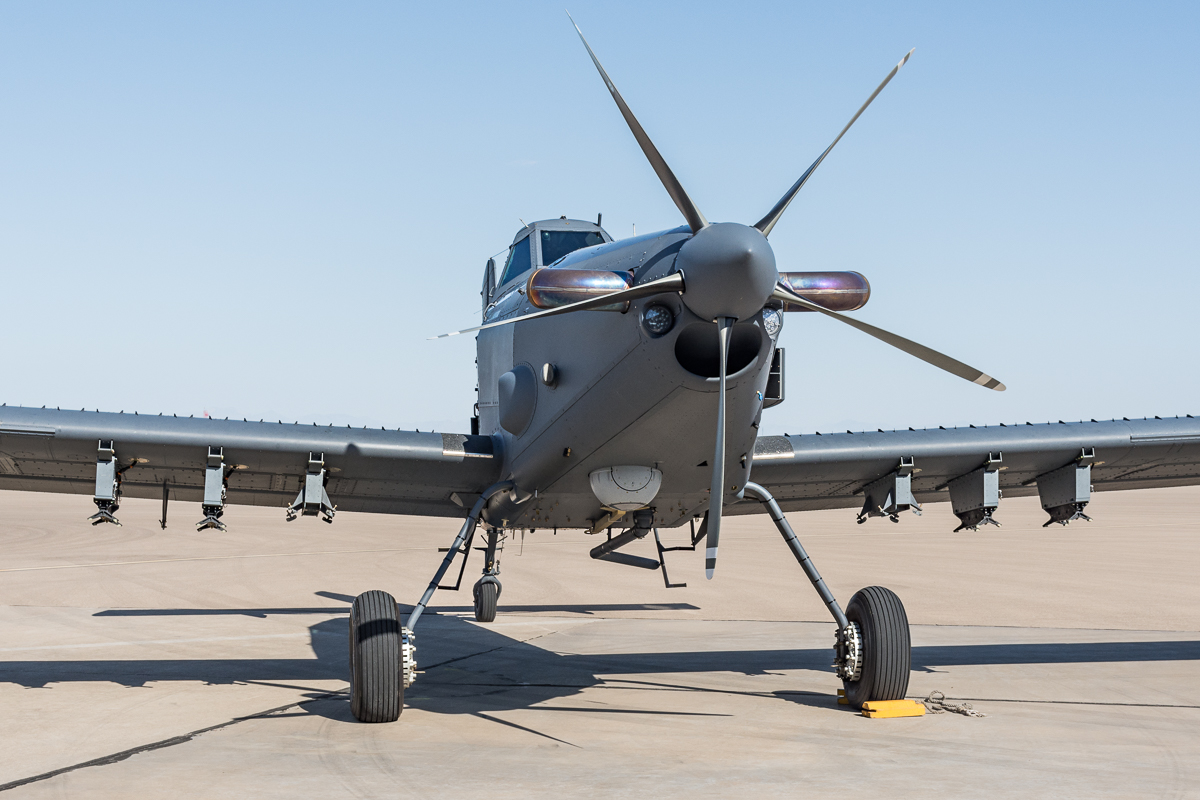 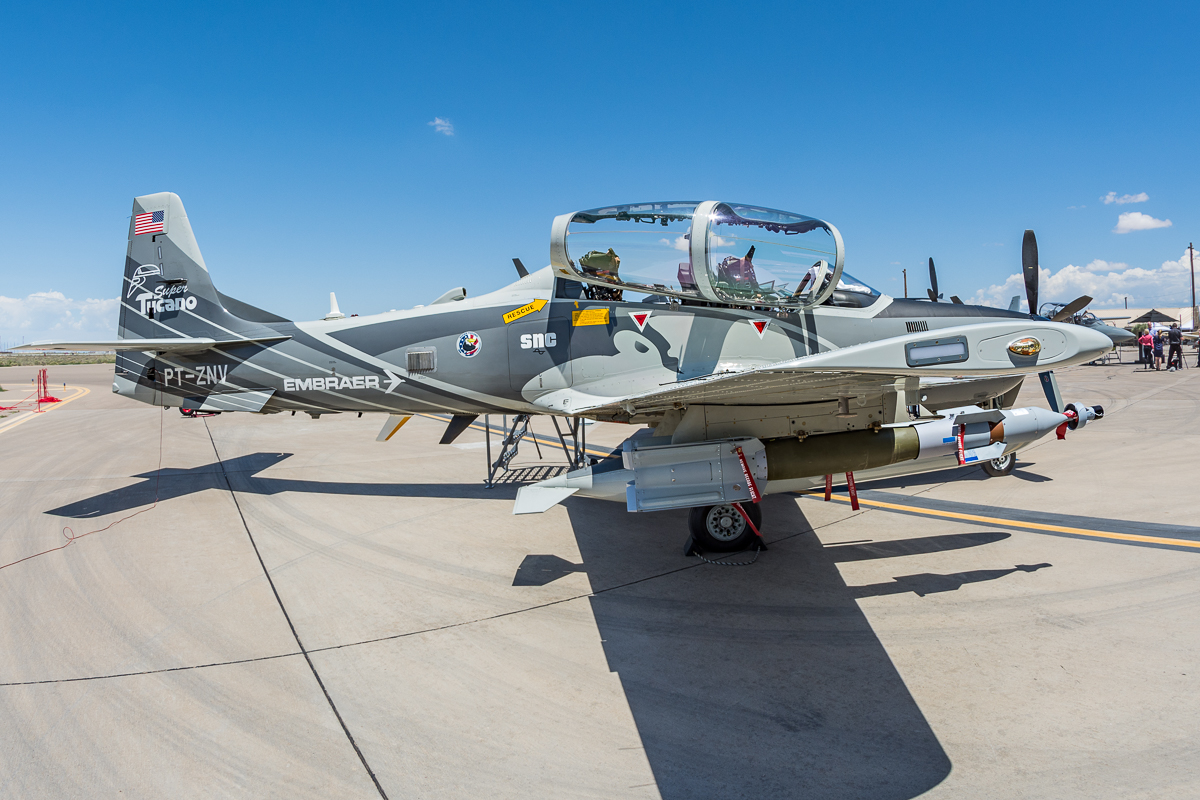 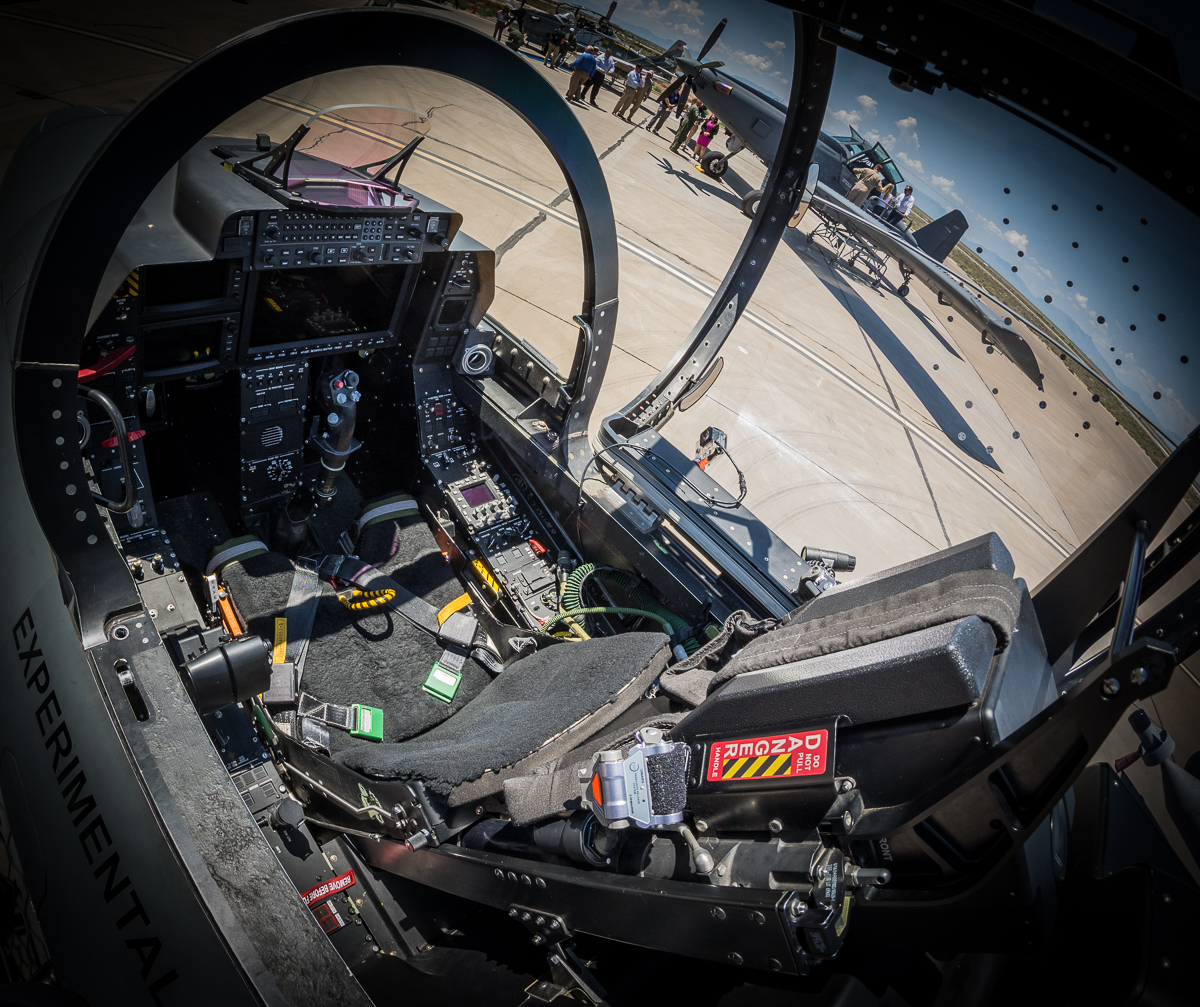 The cockpit of the Textron Scorpion 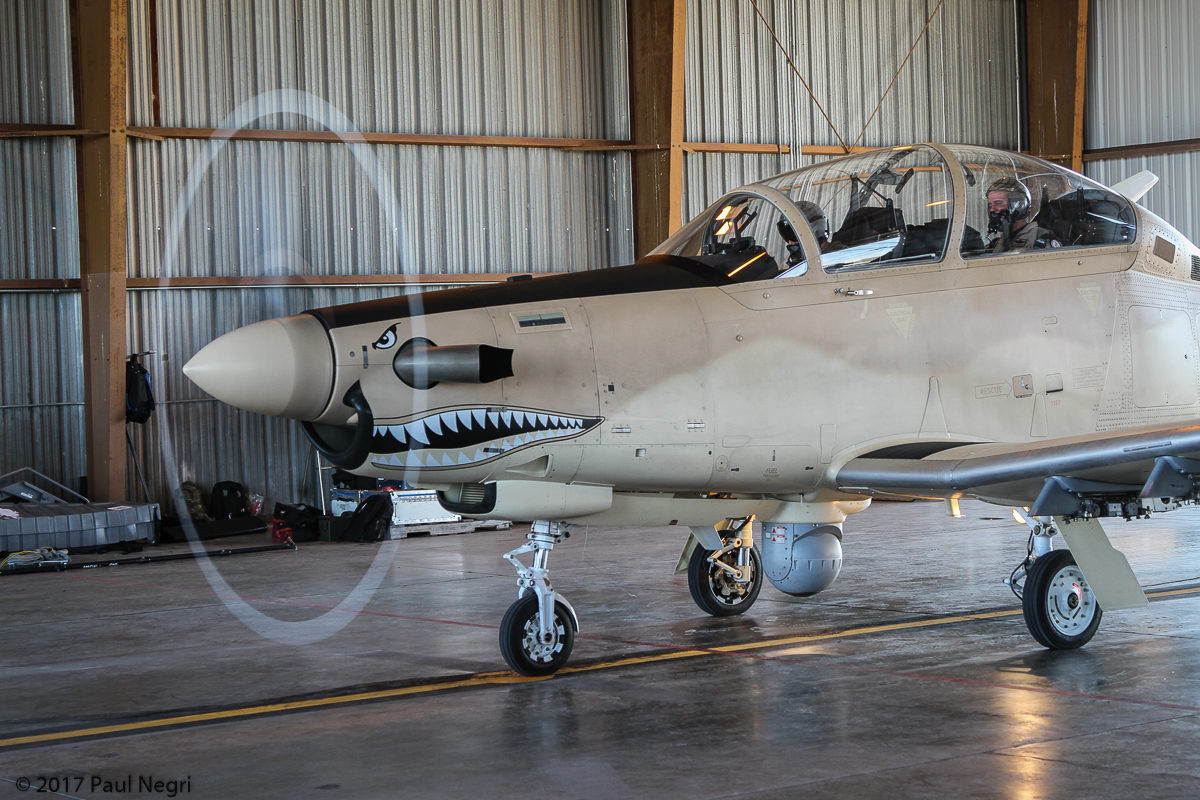 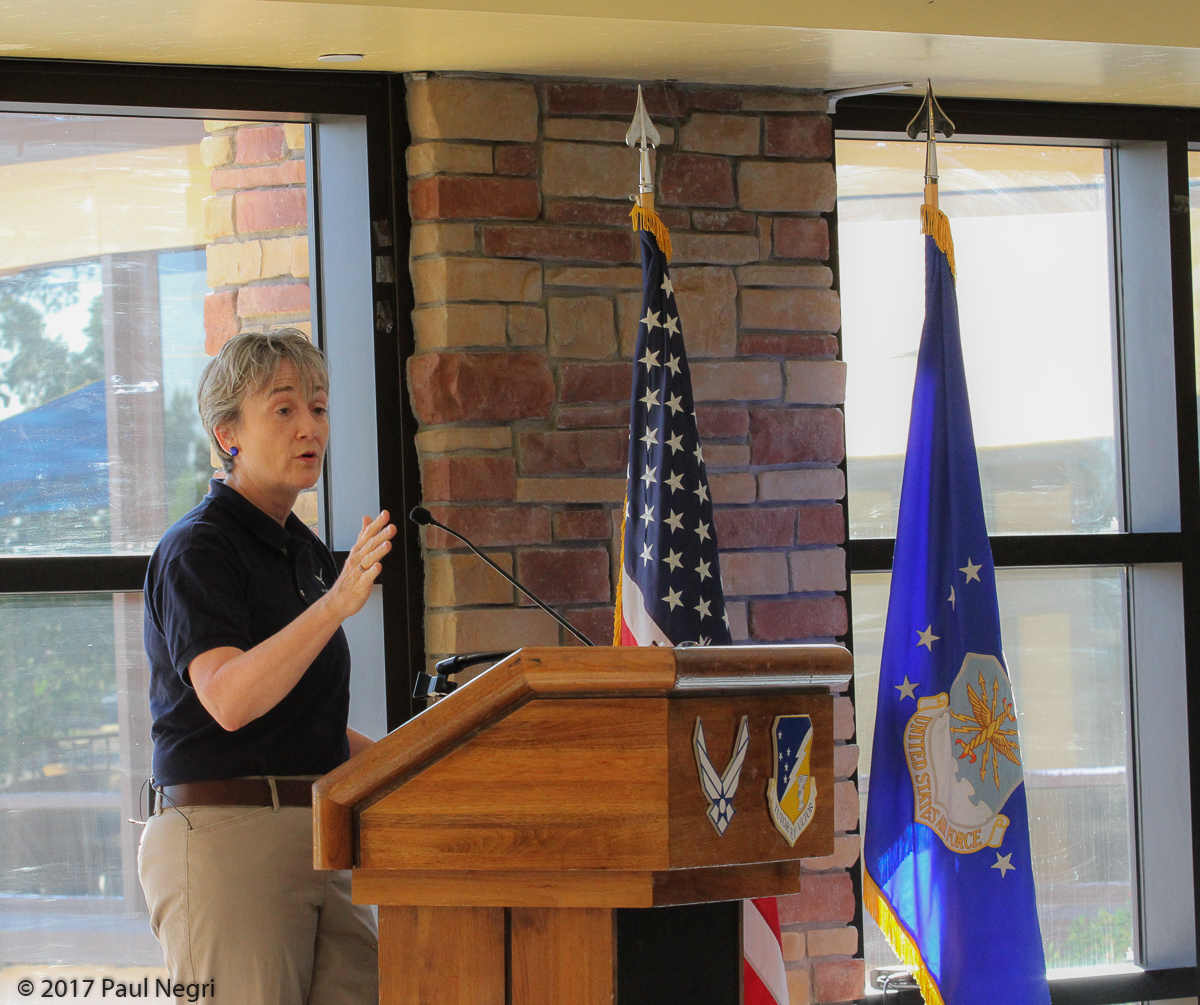 Secretary of the Air Force Heather Wilson addresses military members, dignitaries and members of the media at Holloman AFB 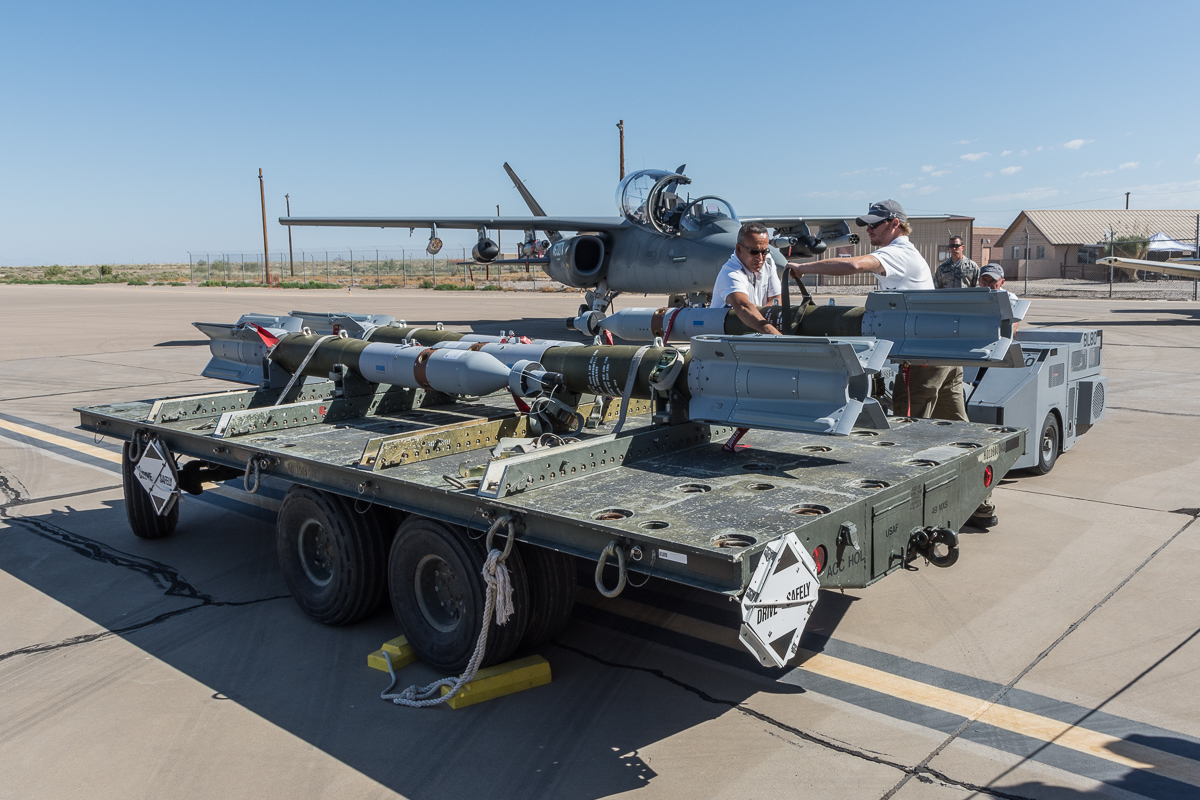 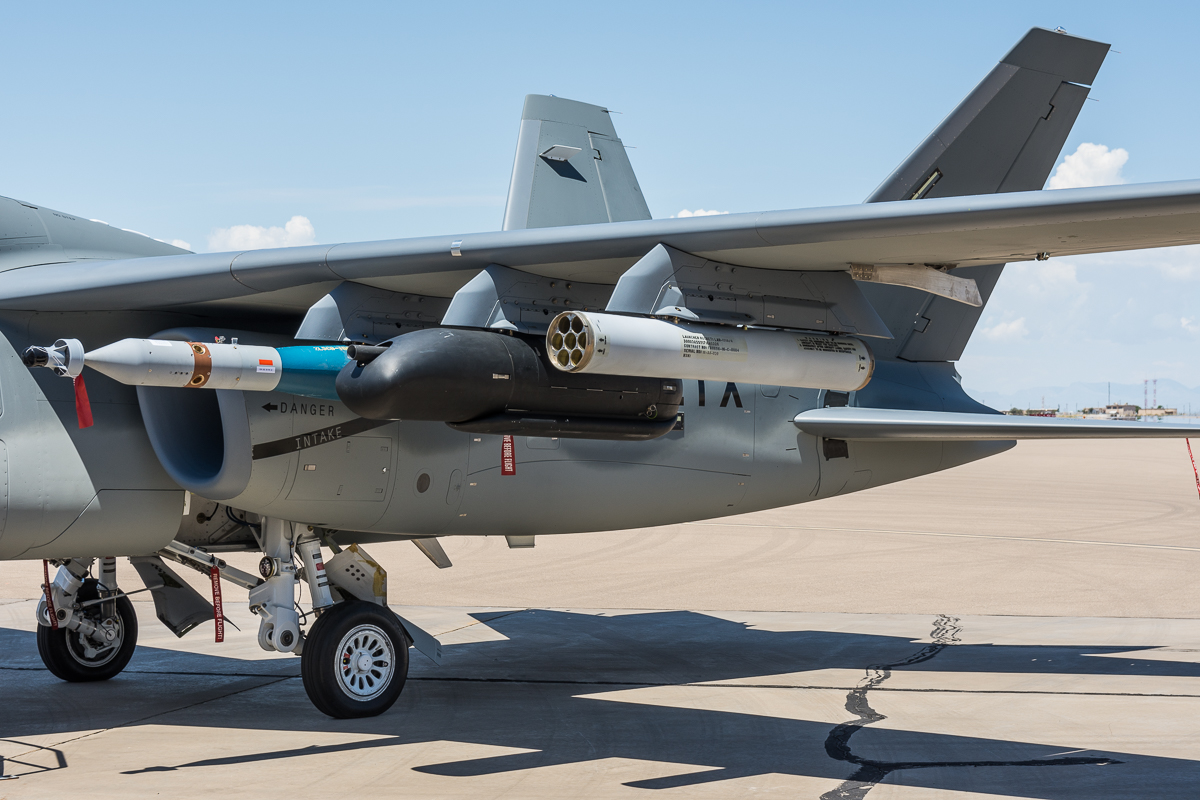