Isaac Lebowitz visited Nellis AFB for Red Flag 16-2 and gives us an inside look at Italy’s participation.

The Red Flag 16-2 exercise took place at Nellis Air Force Base from February 29 to March 11, 2016. The Italian Air Force returned to Red Flag, but this is the first time attending with their Eurofighter Typhoons.

They brought over eight Eurofighter Typhoons, three Lockheed C-130s and two Boeing KC-767 tankers. They also transported approximately 190 personnel to Nellis AFB to hone their skills and share knowledge with coalition partners during the two-week exercise.

The Eurofighter Typhoon is a twin-engine, canard-delta wing, multirole fighter with air-to-air and air-to-ground capabilities. Powered by two EJ200 turbofan engines, the Eurofighter Typhoon can cruise at supersonic speeds for extended periods without the use of the afterburners, and has a maximum speed of Mach 2.0 and a maximum altitude above 55,000 feet. 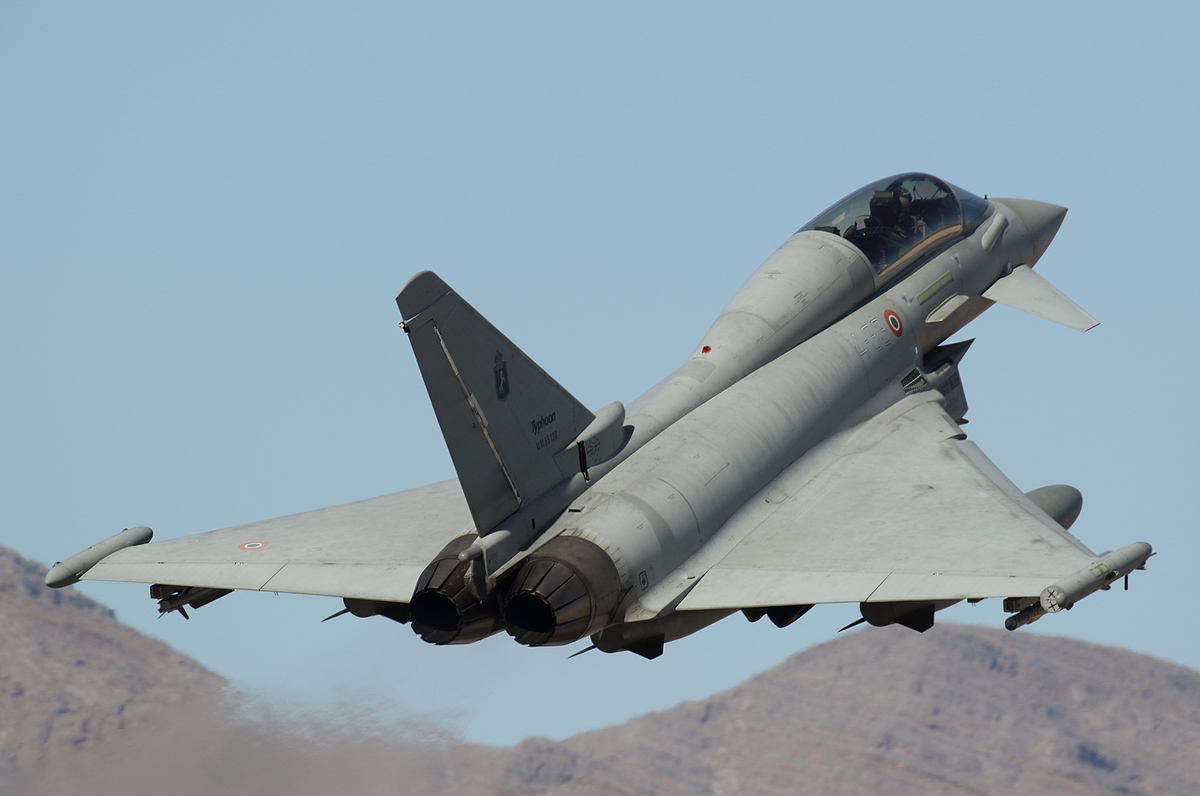 Its strengths include weapon availability (up to 6 bombs while also carrying six missiles, a cannon and a targeting pod) and sufficient processing power to simultaneously support missile in-flight updates and bomb in-flight targeting. The aircraft excels in the swing-role capability – which means that it can accomplish both air-to-air and air-to-surface roles on the same mission and swing between these roles instantly, offering great flexibility. This reduces cost, increases effectiveness and enhances interoperability with allied air forces. 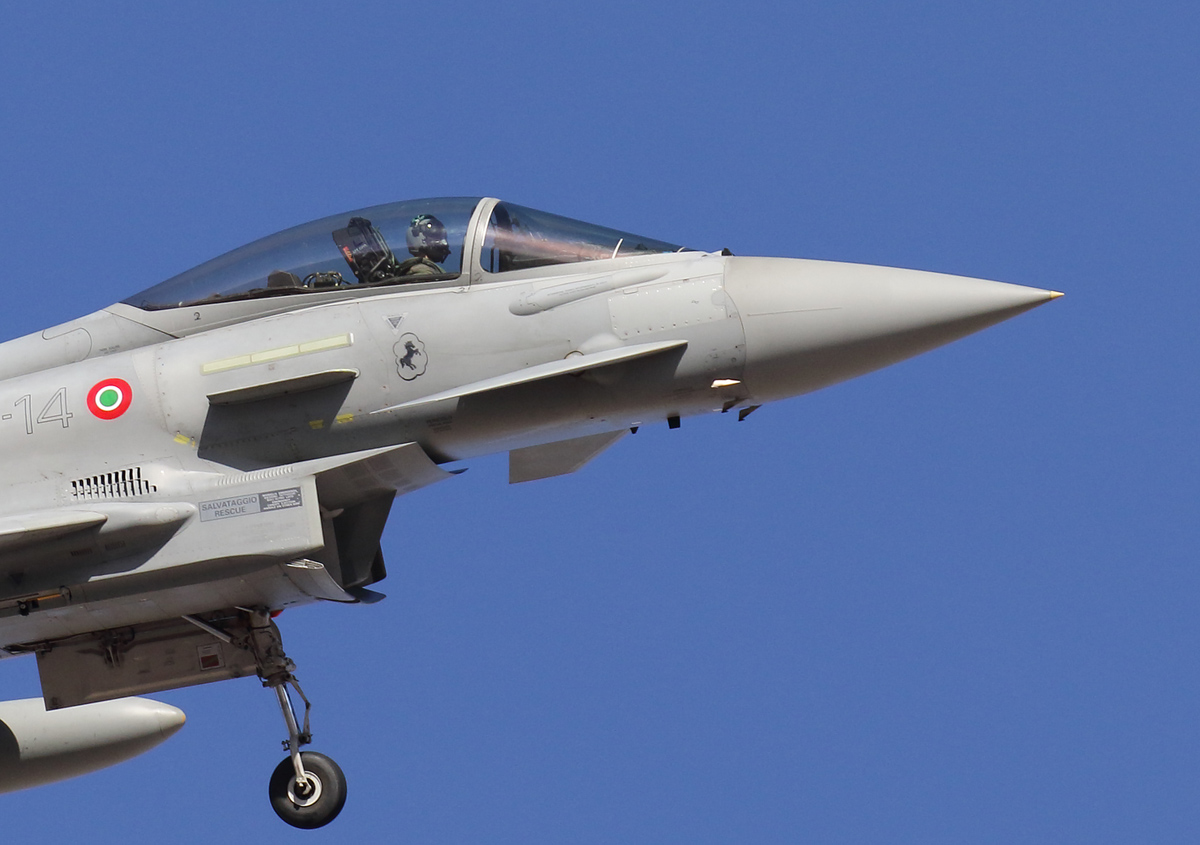 Colonel Marco Bertoli is the Italian Air Force combat forces command, detachment commander for Eurofighter Typhoon at Nellis. He says working together with U.S. forces and other coalition partners is the key to success for any operation. “Our integration with U.S. and Turkish (air force) allies has been great for us,” said Bertoli in a USAF interview. “Integration is the key for success in any operation in which we work with our partners. In order to prepare our pilots and technicians for future operations, Nellis and Red Flag is the right experience for us to integrate as a single big force.”

Bertoli went on to say that “It has been a great learning experience, I think our Typhoons and aircrews performed very well in this very unique environment. During the first two or three days (of the exercise), the learning curve was very steep because of integrating with everyone, but after that I think the force all came together and performed very well.” 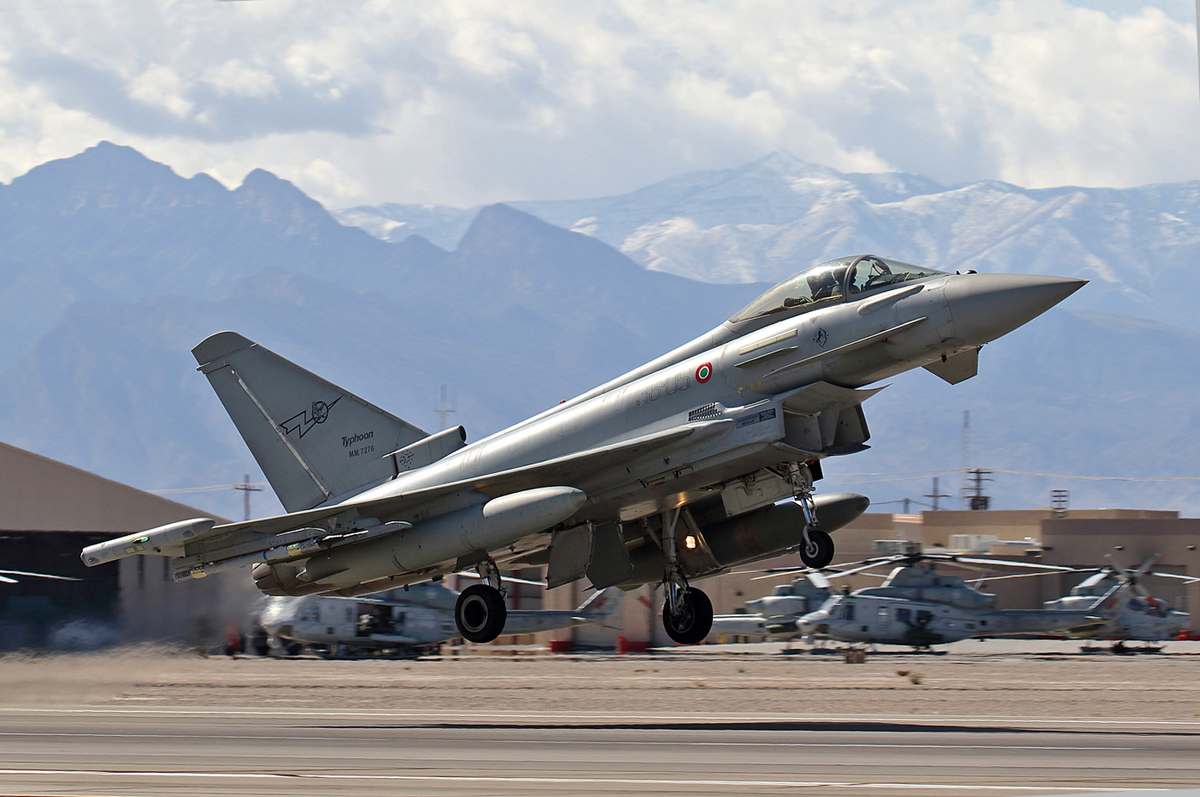 Bertoli reiterated that integration with other units and coalition partners are what make the mission successful and the training relevant for future operations. “If you want to operate in modern scenarios, you need to integrate and exchange ideas with your partners,” said Bertoli. “We need to work as a unique force at Nellis and we should design an exercise just like Red Flag in Europe because the training is very beneficial.”

“The Italian air force considers Red Flag to be the most important place in the world to train our pilots,” said Maj. Davide Tortora, Italian air force headquarters public affairs officer in a USAF interview. “Here we can train in air to air and air to ground where we hope our young pilots can bring this experience back to Italy and they can share with other pilots so we can enhance training in our home country. When Red Flag 16-2 ends, the Italian air force hopes this valuable training can transfer over to the personnel that were not able to attend. Red Flag provides an exchange of ideas through a series of intense training scenarios daily for joint and coalition units to enhance combat readiness and effectiveness for future real world missions.” 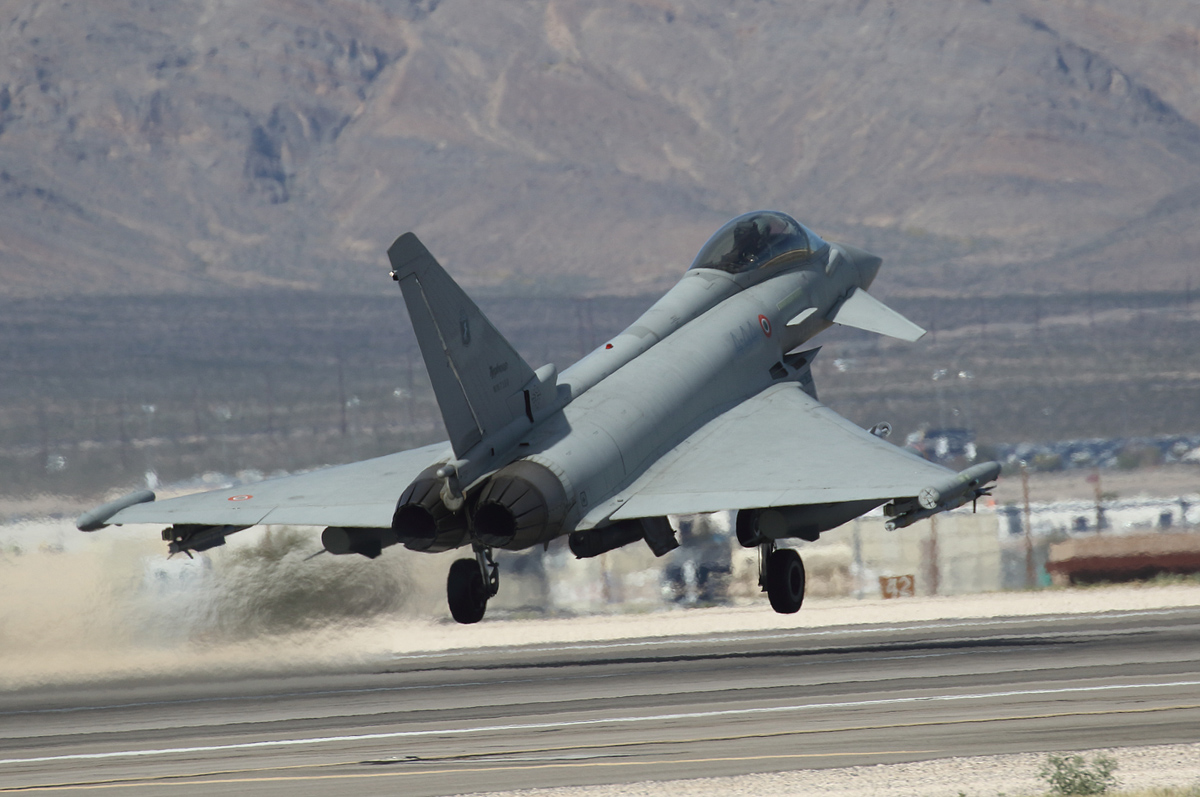 During the interview panel on media day, Col. Bertoli was asked what he hoped to accomplish at Red Flag, “The Italian Air Force feels that by far this is one of the best combat training environments that our pilots can find anywhere in the world. So we have committed ourselves with the Eurofighter Typhoon to train our pilots and integrate them with our manufacturers and give them the possibility of having great training and be ready for future operations.”

In addressing the challenges they faced, he stated that “Participating in this operation we faced many challenges, the first one is bringing 8 aircraft and 190 people 6000 miles away from home. So we have to show a very good deal of development and deployment capability. And then we are facing a lot of training challenges which is good of course, because our guys here put together a very realistic scenario. So depending on the adversity you find in the air and on the ground , our pilots are going to be ready to participate in any future operations along with our NATO allies.” This deployment to Nellis AFB is the furthest deployment that they have done so far with the Typhoon. 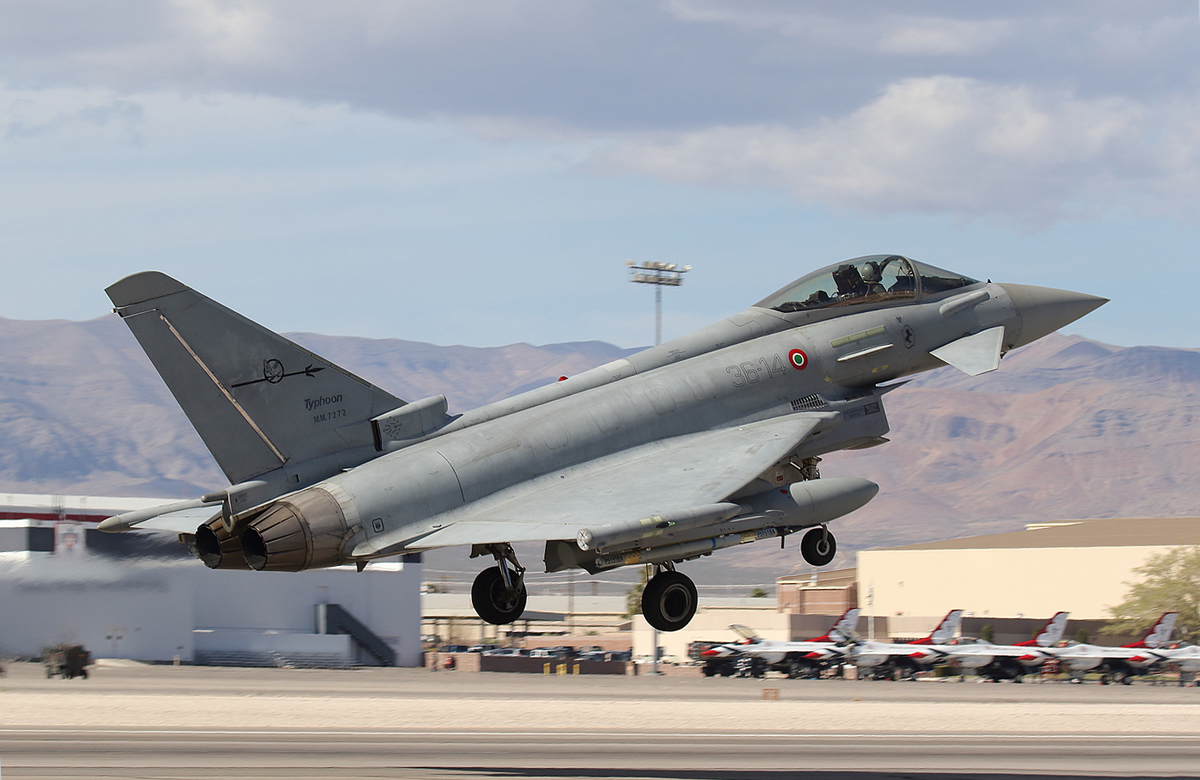 When asked if they brought experienced pilots, inexperienced pilots and are they all from the same squadron or a mix of the Typhoon force?  Col. Bertoli explained that the Italian Air Force with the Eurofighter doesn’t think any more about wings but of the entire force. “That is why we brought pilots from all three wings we have in Italy – we want them to standardize together and be able to operate as a single force. As far as the age of the pilots, we firmly decided in the spirit of Red Flag, to bring here the very young pilots. Because we need them to be able to train the other guys at home and be able to transmit the experience of Red Flag for several years into the future of the Italian Air Force.”

When asked what roles they would be training in, he mentioned that since the Typhoon squadrons primary role as an air superiority fighter is air to air, they are here to train their pilots in air to air. 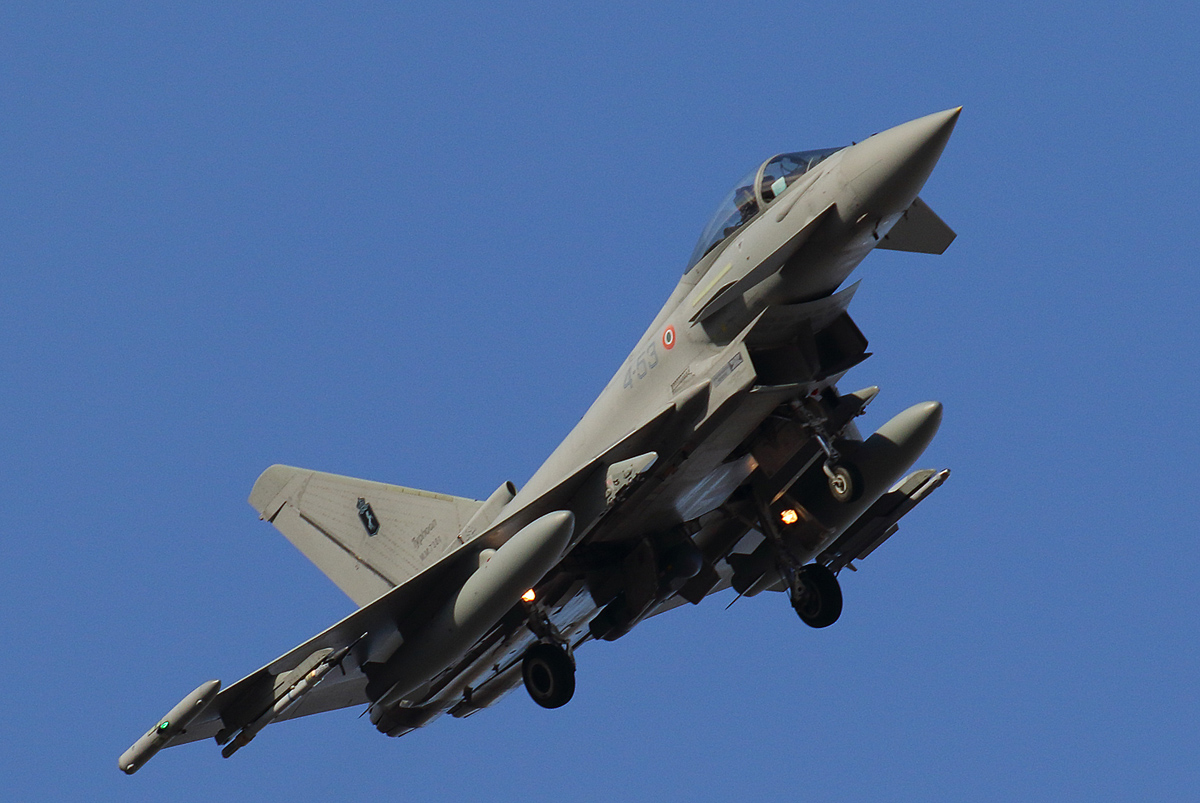 Since the United Kingdom had brought over Typhoons to the previous Red Flag, Col Bertoli was asked if the Italian Air Force had been in touch with them to get any lessons learned? “Well of course, not only for the Red Flag but for the Eurofighter community in Europe, there is a continuous exchange of TTPs (Tactics, Techniques, and Procedures), ways of thinking and best practices. We have a forum in Europe for the Typhoon interoperability project in which we exchange experiences. And of course, for sure we talked to our allies in Britain to ask them their perspective on Red Flag and for advice on how to come here on deployment.”

With this being the first time the Italian Eurofighter Typhoon has participated in Red Flag, Bertoli is thankful for the opportunity to come out here. “I’m very proud to be the commander of the first Italian Eurofighter squadron to take part in Red Flag and I’m really thankful to the U.S. Air Force for having us here and putting together this exercise to benefit our training.”

Aviation Photography Digest would like to thank the Nellis 99 Air Base Wing/Public Affairs office and SrA Thomas Spangler for their assistance and cooperation.