The Israeli Navy and IAF: Working Together to Maintain Readiness

The Israeli Navy and IAF: Working Together to Maintain Readiness

Israel has a relatively small amount of coastal waters, unfortunately, due to the fact that it is surrounded by countries that could potentially be hostile towards Israel, the need for a strong Naval Force is a necessity.

The Israeli Navy is considered one of the smallest in the Middle East, yet in the same breath, it is also the one that, according to some foreign sources (which is unable to be verified), the force that packs the most strategic punch in the form of an ultra-secret submarine fleet.

Since the submarine fleet is off limits to civilian photographers most embarkation requests involve either Israel Navy’s Cruiser or PT Boat fleet.

As with most requests, due to Israel’s high tempo of operational activity, nothing is ever guaranteed. After having requested to join a MEDEVAC op with the Navy’s PT Boat squad I waited patiently for approval.

On a hot summer night a couple of months ago, I received a call asking if I could report the next day to the Haifa Navy Base for an embark, very few details were provided other than a helicopter would be involved.

Arriving at Haifa Navy Base, I was escorted to the docks belonging to the 914 Squad. First thing I noticed when arriving where the well-oiled weapons of various calibers laid out for inspection. The saltwater of the Mediterranean can create rusty havoc on any piece of weaponry not properly taken care of.

After inspection, all weapons are reassembled and mounted on to the “Dvora” class patrol boat #814 which as goes with an old Navy tradition has the un-complimenting name – “The Monsters”.

The Dvora Patrol boat #814 leaves in tandem with another boat in order to commence this day’s exercise. Similar to the tradition in the US Navy the Dvoras leave with music blaring and the crew in high spirits. We make our way to International waters, situate ourselves in an area clear of the shipping lanes into Israel in order to begin our exercise. The crew prepares itself, within minutes we are notified that one of the IAF’S Panther Helicopters from the “Defenders of the West” squadron is en route to evacuate a simulated injured soldier from the vessel. The soldiers have the stretcher prepared in minutes to be hoisted to the helicopter along with a simulated soldier.

The SA 365 Eurocopter Panther helicopter (known in Hebrew as “Atalef” or Bat) it is the smallest in the IAF’s fleet, although it is piloted by IAF pilots and maintained by IAF personnel, its command structure falls under the command of the Israeli Navy, these helicopters are stationed primarily in Ramat David Airbase.

The Panther moves in quickly, matching his speed to that of the Dvora, the Panther’s Flight Mechanic drops a line for the crew on the Dvora’s deck to fasten to the stretcher and within seconds the stretcher is lifted to the helicopter. After completing its task Captain Cohen the commander of the squad approaches one of the soldiers for whom this is his first time performing this task and explains what needs to be improved for next time. “Next time” is 10 minutes later when the Panther returns for a second maneuver.

The soldiers of the Dvora have little time to rest, after the Panther exits the drill they are notified that an IAF CH 53 Yasur is en-route to perform the same type of rescue exercise, with a slight difference, the Panther is the IAF’s smallest helicopter, the CH-53 Yasur is the IAF’s largest helicopter, as such it creates a much more challenging environment to work with.

The downward rotor wash causes large amounts of water to wash onto the deck, a situation that during the spring may be at the most a bit annoying, but one can only imagine how the soldiers must feel performing this exercise in the middle of the winter. 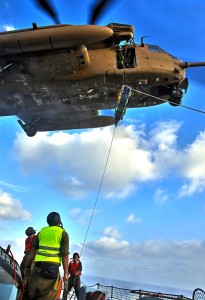 The CH-53 Yasur from the “Nocturnal Birds of Prey” squadron based in Tel Nof AFB performs its task a bit more cumbersomely than the Panther, but the job gets done quickly and efficiently just the same. After a significant amount of practice runs and getting a serious shower, the Yasur exits the training area.

As darkness falls, the exercise is repeated with both airborne platforms over and over. This is done with the purpose of instilling confidence in the Commanders the pilots and the soldiers so that should the need arise they will be able to perform this task quickly and efficiently whether by day or by night and in good or bad weather.

Towards the next morning we head back to port, skimming along Northern Israel, all along the soldiers are checking radar and sensors for enemy activity since in Israel you are always close to a hostile border, no matter where you are in the country.

After a long day at sea one thing is very clear, miles from the border, somewhere in the middle of the ocean, far from sight, there are soldiers guarding from a series of threats one can only imagine.