The Greek-hosted “Iniochos” exercise is a medium scale multinational (INVITEX) exercise taking place from the facilities of the Air Tactics Center on Andravida Air Base. It is located in the Northwest Peloponnese with operations mainly utilizing the Athena FIR during the exercise from March 15 through April 8. The exercise scenarios make use of the single base concept; flight operations from one single air force base. The only exception to this were the participating French Rafales, flying from Charles de Gaulle, Paris.

Iniochos’ history goes back to 1980, starting as a small-scale tactical exercise, fulfilling the need to train combined air operations for harmonization purposes. This was necessitated due to the standard operating procedures of the Hellenic Air Force. The exercise proved to be a success, leading to the decision of making it an annually recurring event. Its main objective: training personnel in planning and execution of Combined Air Ops (COMAO) in accordance with the HAF methodologies. The exercise provides a realistic environment to test operational plans and tactics including its evaluation.

Responsibility for the optimal coordination and planning of the exercise lay with the Hellenic Fighter Weapons School, deployed to Larissa. They formed the White Cell in the facilities of the National Center of Air Operations. Participating aircraft were also deployed to Larissa, at 110CW, from where they flew their missions.

The exercise was decentralized in 2005, keeping participating aircraft tied to their mother bases. The aforementioned White Cell operated in the Air Tactics Center and the Fighter Weapons School facilities in Andravida Air Force Base, implementing newly acquired means of command & control.

The Single Base Concept was adopted in 2013, expanding the spectrum of operations to a more realistic and demanding environment. The exercise acquired a more intensive and prolonged battle rhythm, increasing the level of training and thus effectively upgrading the exercise to medium scale. The exercise was first held in the form of an INVITEX (Invitation Exercise) in 2015 with the participation of the IAF and USAFE Special Forces (SOF) as JTAC. 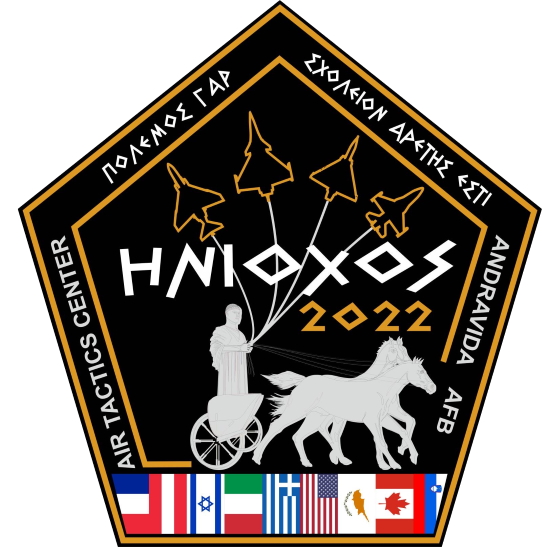 Ever since that first INVITEX in 2015, the Iniochos exercise saw a growing interest by other countries and has attracted the participation of a wide variety of countries such as the US, Israel, UK, France, UAE and Italy.

Participants of the 2022 edition of Iniochos were:

• France with the Rafale (operating from Charles de Gaulle) and AEW.

• Italy with the Tornado from 6TH stormo

• Cyprus with the AW139 helicopter.

Its main goal: providing realistic training by means of a realistic combat environment. This is done through assessment of recordings & event data. This tracking data is provided through on-board and ground-based sensors. The Fighter Weapon School instructors use this data in conjunction with specialized debriefing software to reconstruct the missions, keeping a close eye on the debriefing process.

The tactical command of the participating air forces is taken over by the HTAF chief, stationed in the ATC for this purpose. The HFWS oversees the missions from scenario planning to debriefing, ensuring the objectives of the exercise are met. This covers the full spectrum of the missions currently performed by the HAF such as:

Iniochos aims to be one of the most competitive exercises in Europe and the Mediterranean, providing participants with a high level of training standards and a unique experience. This is made possible by the highly skilled HAF-personnel and their ability to conduct exercises which involve a variety of weapon systems within one of the largest training areas in Europe.