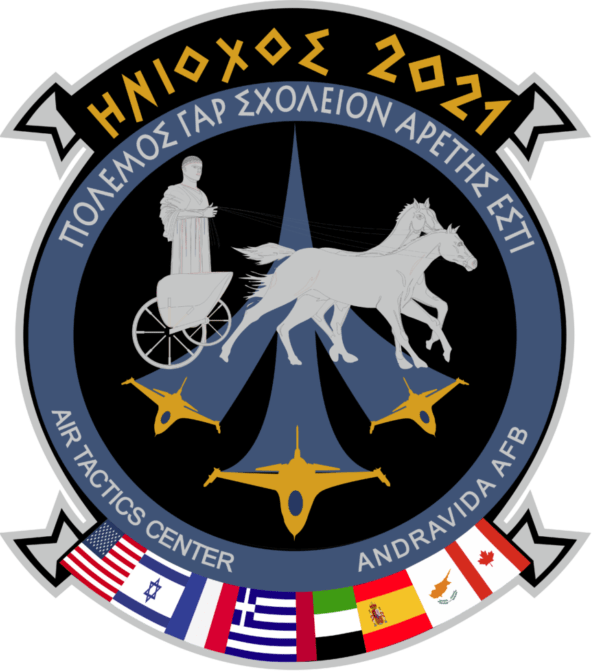 From 12 to 22 of April the Hellenic Air Force hosted a medium-sized multinational exercise named Iniochos 2021 at the base of 117 Combat Wing in Andravida, home of the last Greek Phantoms. George Karavantos reports.

In this exercise, the HAF, along with the other six participating Air Arms took advantage of one of the most suitable and at the same time most challenging airspace in Europe for conducting these large scale air operations, a wide variety of air defence systems and remarkable mix of modern aircraft and ordnance combined with considerably experienced crews.

The Iniochos exercise dates back to the late 80s, when it was established as a small scale air warfare exercise with only aircraft of the HAF. Initially the participating aircraft were deployed to 110 CW in Larisa, but in later years each aircraft operated from its home base. In 2005, Iniochos was transformed into a medium scale exercise, involving all three branches of the Hellenic Armed Forces.

On November 2013, the Single Base Concept was adopted for Iniochos and the selected host for this kind of event was 117 CW at Andravida air base. It was also decided that Iniochos would become an Invitex exercise, meaning that other nations could be invited to participate in the exercise. The main goal of the exercise has always been the design and execution of COMAO operations and Electronic Warfare in a simulated hostile environment with real-life components producing the threat.

The last consecutive years, Iniochos has gathered a true diversity of fighters and Nations with the biggest in 2018 when UAE, Israel, USAFE, UK and Italy had participated. 2019 saw the first F-35 from the Italian Air Force participating at Iniochos. Unfortunately last year’s event was cancelled due to the pandemic which affected almost all the military aviation events across the Globe. This year’s exercise was another big success, with 6 participating Air Arms and 96 aircraft in total.

The deployment of the Hellenic Air Force in this exercise was enormous and consisted all of types of aerial assets of its inventory with more than 30 F-16s belonging to various squadrons, 4 F-4Es, 4 Mirage 2000s and 1 EMB-145H AEW&C, while Cyprus was the last participant with the utilization of a single AW-139 helicopter.

Israeli Air Force and USAFE have been attended to all Iniochos exercises the past six years. Obviously the results were beneficial for both them as they all keep on returning to Andravida every to participate to the exercise. This year there were six Israeli F-16I Sufas from the 107th Squadron “ Knights of the Orange Tail” and another six F-15I Ra’ams from the 69th Squadron “Hammers” both based at Hatzerim AB, along with a G550 “Nahshon-Eitam” Airborne Early Warning & Control role (AEW&C). For the first time USAFE deployed 14 F-16s from Aviano AFB were deployed to Andravida along with approximately 260 airmen from the 510th Fighter Squadron “Buzzards”of the 31st Operations Group.

Bilateral cooperation between USAFE as well as Israeli AF and the HAF has been rehearsed many times in the past and has proven excellent. Both air arms have many similar traits to the HAF so joint composite operations can be accomplished. “Iniochos is an important opportunity for our Airmen to train alongside and learn from our Greek allies as well as the other exercise participants,” said U.S. Air Force Gen Jeff Harrigian, USAFE-AFAFRICA commander. “It both improves the relationships that underpin our military alliance and creates opportunities to refine critical skills that enhance our interoperability.”

Both the French and the Spanish Air Forces made their debuts at this year’s Iniochos. There were several invitations to Armee’ del Air in the past but due to operational commitments like the previous operations in Syria, that was not possible. French Air Force was almost certain that it would participate at this year’s exercise after the breaking news of the sudden order of French Rafales from Greece. Less than two months ago, four Rafales had visited Tanagra, the home of all the Greek M2000s during the “Skyros” exercise. The participation of the French Air Force was massive since they deployed not only Rafales C and Ds but also Rafale Ms along with Mirage 2000Ds.

The UAE had made their debut in 2017 by participating with their modern F-16Es Block 60 while next year they had brought their Mirage 2000-9s, both types relevant with the ones of the Hellenic inventory, which were of great interest for the Greek pilots. The Arabs returned again this year and brought again 4 F-16E/F Block 60 from Al Dhafra AB along with 100 people personnel. The F-16E/F Block 60 “Desert Falcon” is equipped with the highly capable AESA radar, the AN/APG-80, which is of special interest for the Greek Viper pilots, since the Greek F-16 fleet will be upgraded with this radar.

The main goal of the Iniochos exercise is to simulate as realistic as possible the so called “Battle Rhythm”, which includes the design, the operation, the collection of data from the battle assessment and the debriefing for each mission. The command of the aerial operations of all involved participants belonged to the Chief of the Hellenic Air Force General Staff, who was the officer scheduling the exercise in direct contact with the rest of the Chiefs of all armed forces inside a control room, called the White Cell.

During these ten days, the Hellenic Air Force launched fighters from all Tactical Air Commands and along with the other participating Air Arms accumulated a total of nearly 1000 sorties, day and night. In the exercise’s scenarios strike packages faced all available air defence systems, provided by all branches. The HAF cooperated with aerial assets from the Hellenic Army and the Hellenic Navy. In fact the Hellenic Navy performed it’s one major exercise called “Lailaps 21” which took place at the same time in order to make the whole scenario more realistic. The Hellenic Navy participated with ships and frigates and S-70 helicopters, while the Hellenic Army took part with CH-47D Chinook and NH90 and AH-64A/D Apache attack helicopters, each performing different kinds of missions.

All participating aircraft had the opportunity to strike various target types, ranging from tanks and frigates to air bases or other high-value assets. Each day a different mission in a different warfare scenario was flown. On a single day more than 100 sorties were made in 4 to 5 different waves, while additional aircraft were joining the exercise from other bases in Greek territory. The missions were being performed autonomously or combined with others, and also included air refuelling support. Practically all the Greek Combat Wings from all bases were involved in this exercise, with most of the Greek aircraft simulating the enemy aircraft (Red Air) taking part from their own bases to avoid airspace congestion, but also to have the element of surprise. Some of the missions were:

Greece is the perfect place for hosting such exercises since the rough terrain of Greece in combination with the Aegean Sea offers a great landscape for mission planners and crews to simulate different kinds of scenarios. Also, there are no densely populated areas and no competing air traffic to compromise the realism and the quality of training. Another encouraging factor is the excellent weather of Greece which offers the ability to fly and train at all altitude.

During the exercise, flight crews of the three nations, air defence systems personnel, and Special Ops members exchanged their views and ideas. Despite the fact that they speak different operational languages, they share common objectives. As the Chief of the Hellenic Air Force General Staff, Georgios Blioumis, said: “Given the high level of the HAF personnel and our capability to conduct exercises involving a variety of weapon systems within one of the largest exercise areas in Europe, the exercise Iniochos tends to become one of the most competitive exercises in Europe and the Mediterranean region, and provide participants with a high level of training and unique experience of participation”.

The results of Iniochos exercise 2021 have been excellent and once again the conclusions were drawn that this kind of exercise helps improving the joint operations capabilities. Several Chiefs of Hellenic Air Force have clearly stated in the past that the goal always was and still is for Iniochos to become the largest multinational exercise in the European theatre. In other words, a European Red Flag with a Greek stamp on it. For the first in its history, the Greek Prime Minister, Kyriakos Mitsotakis visited Iniochos exercise and stated as he was finishing his speech: “I wish in 2022 to see our first Greek Rafales taking part in Iniochos along with many more allies!”

One thing is for sure, Iniochos 2021 again raised the standards for next year’s exercise. The impression of all the participants was more than positive, so this exercise has strong potential for more Air Arms to join.

Photojournalist at Aviation Photography Digest
George Karavantos is from Athens, Greece. His love with military aviation started at the age of 10 when he accidentally read a Greek aviation magazine. Since then, he never stopped reading about fighter aircraft and taking photos of them. He was too tall to become a fighter pilot, so he became an airline pilot. Nowadays he is a Captain and a Flight Instructor on the A320 aircraft. Despite his profession, military aviation will always be his obsession.
Send this to a friend
SUBSCRIBE TO OUR NEWSLETTER
All rights reserved © Aviation Photography Digest, 2021
Subscribe to our FREE newsletter and get notified when new articles are published.
Subscribe
×