This past June 25th saw a personal milestone for the graduates of the Israel Air Force Academy in Hatzerim AFB, near the Israeli city of Beersheba. Along with their individual milestones, the Israeli Air Force (IAF) achieved some new milestones as one of the more impressive and advanced air forces around the World.  The Academy, which graduates 2 classes a year (one at the end of June and one at the end of December) is a 3 year long course and is considered the most prestigious course the IDF can offer young conscripts.

Cadets graduating qualify for a position as either a pilot, weapons officer, or airborne refueller. They also receive a Bachelor’s Degree from Beersheba’s Ben Gurion University.

The IAF Graduation ceremony is an exclusive event that draws much attention from the local media and many aviation photographers from around the World keep on their wish list of events to photograph. Since this event is extremely exclusive, many high ranking Israeli Government officials attend the ceremony on a regular basis. 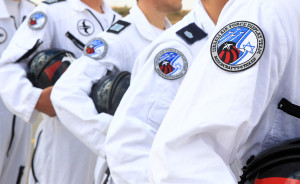 The reason for the attention, it draws is not only the security conscious secret aura that the IAF has with an abundance, but also the fact that most graduation ceremonies include a very impressive live fire exercise. In recent years there have been ceremonies on a much lower key due to budget constraints. Thankfully, this June, the IAF put on a very impressive display.

This June’s ceremony was unique in the sense that the IAF put on 2 brand new displays.

First it finally presented a full display of its new C-130-30J “Shimshon” (Super Hercules), including take off and landing as well as equipment offloading. Additionally the IAF’s new lead in trainer for combat pilots, Alenia Aermachi’s M-346 “Lavi” (Master) put on a full 7 minute display.

Additionally, the IAF, which had sent it’s only Supermarine Spitfire into overhaul almost 5 years ago, received it back.  The Spitfire, known as “The Black Spit” or “Ezer’s Spit” (was the late IAF Commander Ezer Weitzman’s personal aircraft in the 1960’s)  was returned to the IAF in pristine flying condition and was flown once again by IAF Ace Oded “Dedi” Rosenthal at this June’s graduation.

Generally, a short flypast of various IAF aircraft is scattered throughout the event along with a display by the IAF Aerobatic Team flying the T-6 Texan “Efroni”.

But the more unique part of the display is the scenario that includes troop insertion by a C-130-30J, low level precision bombing of targets by IAF F-16I s from the Knights of the Orange Tail squadron, a CSAR exercise which includes a CH 53 rescue along with AH 64A “Peten” (Apache) gunships laying down cover fire for the extraction.

The event’s final act is a 7 minute solo display put on by the F-15I with the IAF Aerobatic Team sealing the show.

It should be noted that most years include a very impressive “flare show” from the F-15I as well as the AH-64s, this year, following a scary incident last year in which a strong wind factor wasn’t taken into account and an AH-64 suffered a certain degree of damage, this year flares were not authorized for use.

All in all The IAF graduation is a short but very condensed action packed event, well worth seeing if you have the chance or opportunity.