Crete, the largest Greek island in the southern Aegean Sea, is the home of the 115 Combat Wing of the Hellenic Air Force, operating the Lockheed Martin F-16C/D Block 52+ from Souda Air Base. The 115 CW is comprised of two squadrons, 340 Mira “Alepou” (Fox) and 343 Mira “Asteri” (Star).

The Block 52+s are the most numerous F-16s in the inventory of the Hellenic Air Force. Most of them equip the 115 CW at the base of Souda AB on the island of Crete, where the two Squadrons, 340 Sq and 343 Sq, utilize 20 aircraft each. The rest of the delivered Block 52+s’ are based in 110CW in Larissa AB equipping the 337 Squadron “Phantom”.

The 340 Squadron (Alepou – Fox) was established on the 18th of April 1953 in Elefsina, home of the 112CW. It was equipped at that time with the Republic F-84G aircraft. In September of the same year the Squadron was transferred to the 111 CW in Nea Anghialos. In May 1958 the unit’s aircraft were replaced by the more advanced F-84F Thunderstreaks. On the 4th of February 1960, the unit was transferred to 115 CW in Souda from where it operates until today.

In August 1975, the unit started to accept the newer aircraft, Ling-Temco-Vought A-7H Corsair II. On the 10th of June 1977, it handed over 19 of its newly acquired aircraft to equip the 347 Sq in Larissa. In 1980 the Squadron received the first two-seaters TA-7H that were later ordered as a supplement to the previous order. On July the 31st 1992, the Squadron received half the aircraft of 347 Squadron’s inventory. On the 30th of September 2001, a deactivation ceremony was conducted in Souda, while all the remaining Corsairs were handed over to the 345 Sq. 50 years after its establishment, on March the 3rd 2003, the Squadron was reformed for the introduction of the new aircraft Lockheed Martin F-16C/D Block 52+ Fighting Falcon.

The 343 Squadron (Asteri – Star) was first established in September of 1955 in Elefsina and it was initially equipped with the North American F-86E Sabre in the day interception role. Six years later, in 1961, the F-86D replaced the ‘E’ version, which offered the capability for night interception. The ‘Sabre Dog’ was operated by the 343 Sq for a relatively short five years’ period and in March 1966 the squadron transitioned to the Northrop F-5A/B Freedom Fighter, with a primary role of day interception and a secondary role of air-to-ground strike. These aircraft continued to serve 343 Sq for a period of 35 years until March 2001 when operations were temporarily suspended. On 21 July 2003 the 343 Sq re-entered operational status in Souda with F-16 C/D Block 52+ aircraft.

The 337 Squadron Fantasma (Ghost) is the third oldest Squadron of the HAF. It assumed operational duties on March the 30th, 1948 and it was initially equipped with Spitfire Mk. IX. In 1952 a significant change in the history of the 337 Squadron took place, when it successfully passed into the jet era. Through the years, the 337 Sq utilized famous aircraft like F-84G Thunderjets, F-86D Sabres and F-5A Freedom Fighters.

On March the 31st, 1978, after the agreement of the “Peace Icarus II” Program for the purchase of extra Greek Phantoms, the 337 Sq was selected to become the third “Phamous” Phantom Squadron.

After almost three decades of operation of the “Phabulous” Phantom, the history of the 337 Squadron was rewritten again, this time with F-16 Block 52+s aircraft. The Squadron’s reestablishment ceremony took place at 110 Combat Wing in Larissa, on the 20th of October 2006.

With the introduction of the F-16C/D Block 52+ aircraft, the 115 CW entered a new era. The new jets introduced the capability of deep penetration due to the extended range that the conformal tanks incorporate, advanced night operations capability with the NVG systems and full integration of the Joint Helmet Mounted Cueing System along with the high-off bore sight missiles IRIS-T.

Nowadays both Squadrons operate an almost equal number of F-16C single-seaters, (13 for 340 and 14 for 343) but with regards to the two-seaters 340 Sq has ten and 343 has seven F-16Ds. Both squadrons have specific, specialised roles that are not interchangeable. The current role of 340 Sq is precision day and night strike with an approximate split of flight scheduling of 60% day operations and 40% night operations. 343 Sq has a primary role of interception and force protection with a secondary SEAD (Suppression of Enemy Air Defenses) role. In addition to their primary roles, both 340 and 343 Sq maintain the additional commitment to undertake readiness duties to defend their national airspace.

The 343 Sq uses AIM-9L, AIM-2000 (IRIS-T) and the AIM-120C AMRAAM in the air-to-air arena whilst the AGM-88B HARM is the weapon of choice in the anti-RADAR SEAD role. In terms of air-to-ground the aircraft carry also laser guided bombs and the AGM-154C JSOW (Joint Standoff Weapon).

Souda is also the home of the Hellenic Air Force’s F-16 solo demo team, named “Zeus” which represents the father of the Olympian Gods of Greek mythology. The team utilizes an F-16C Block 52+ as the display aircraft.

The effort to create an F-16 demo team began in 2009 when the Greek crew was trained by the Viper West F-16 demo team of the USAF. Two pilots of 115 CW, Captains Emmanuel Karahalios from 340 Sq and Dimitrios Kontoulis from 343 Sq were selected to become the first pilots. After almost a year, on 7 November 2010, the HAF’s F-16 Demo Team flew its first official air show at Tanagra Air Base.

During the initial years there was no one particular aircraft for the displays. Later the F-16C s/n 537 which belonged to 340 Sq was chosen as the demo aircraft and it initially received special markings only on its CFTs. In 2015, F-16C s/n 523 also belonging to 340 Sq received the full demo paintjob only a few days before RIAT 2015, where it made its first UK airshow appearance.

The main external difference of the newer Block 52+s is the ability to carry CFTs (conformal fuel tanks). The CFTs are mounted on the top of the fuselage and are easily removable. They provide 440 US gallons or approximately 3,000 pounds (1,400 kg) of additional fuel, allowing increased range or time on station and free up hardpoints for weapons instead of underwing fuel tanks. These external tanks can be attached on to the aircraft within 1 hour and they don’t obstruct any service panel making them easy in everyday use.

But the main core difference between the Block 52+s compared to the previously acquired Block 50s is the Block 52’s Pratt & Whitney F-100-PW-229. The P&W engine has longer and straight exhaust nozzle of carbon fibre, compared to the Block 50’s F110-GE-129’s shorter and curved nozzle of titanium. Both engines deliver around 29,000lb of thrust.

Another characteristic feature of all the two-seaters F-16D Block 52+s is the dorsal spine. All the electronics housed behind the cockpit on the single-seat version were moved to the top of the spine to make room for the second seat. It adds 30 cu ft (850 L) to the airframe for more avionics with only small increases in weight and drag. The rear cockpit can be occupied by either a Weapon System Operator (WSO) or an Instructor Pilot (IP) and can be configured for each with a single switch in the cockpit.

These newer Block 52+ models compared to the previously acquired Block 50s have several other improvements over the Block 50s, the major ones were:

All the Hellenic F-16s are equipped with the AN/APG-68 radar. The older Block 30 and 50 have the V(3) and V(7) versions respectively, while the later Block 52+ and 52M have the V(9). All are almost identical externally. The AN/APG-68V(9) radar of the Block 52+ provides both improved air-to-air and air-to-ground capabilities. These include a 30 percent increase in detection range, larger search volume and improved tracking performance, new Synthetic Aperture Radar (SAR) mode for the delivery of precision, all-weather, standoff weapons, plus improved Sea Surveillance and Ground Moving Target Indication modes. Overall, the V(9) offers about five times greater processing speed and ten times more memory compared to the previous AN/APG-68 versions. 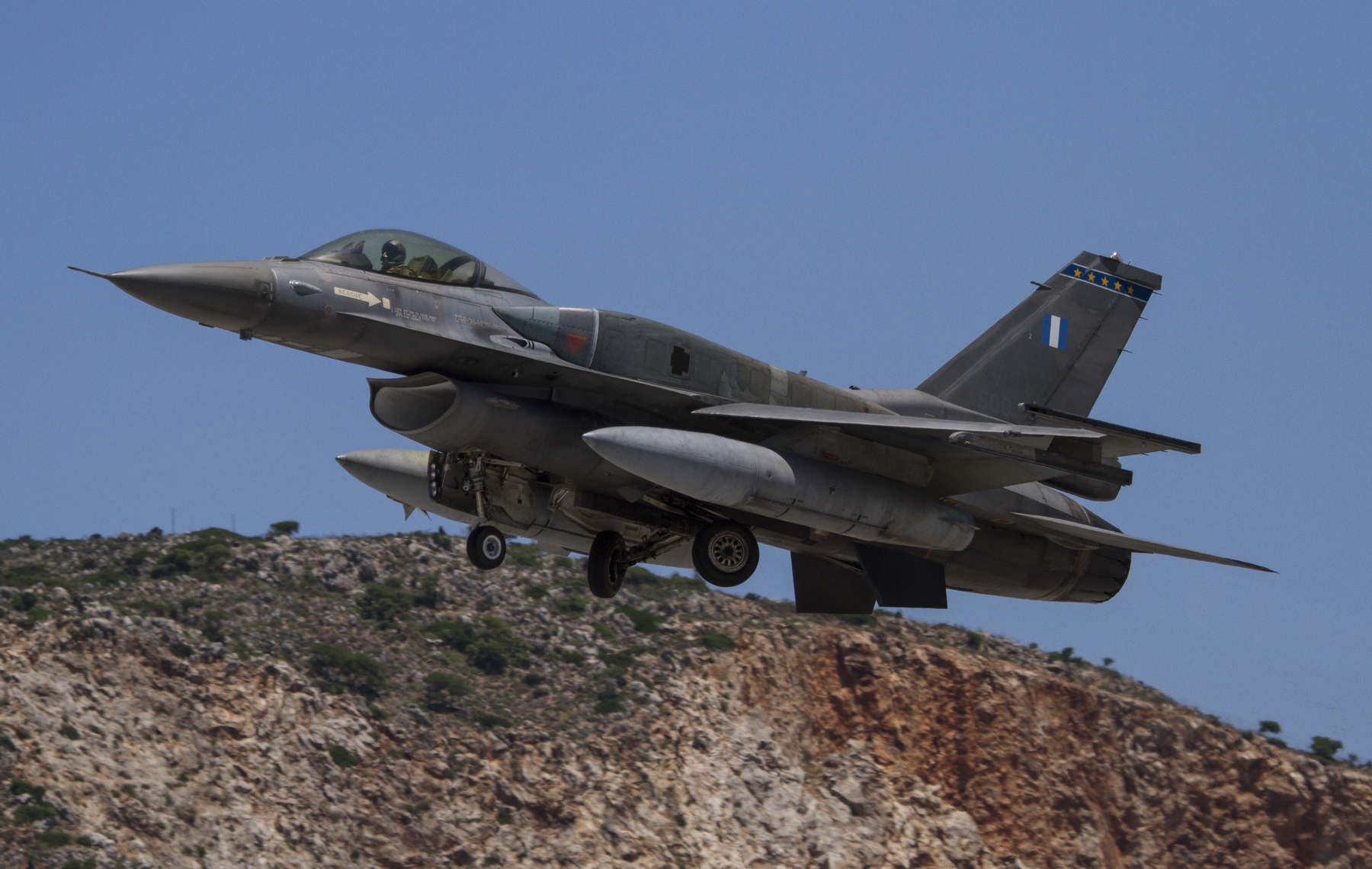 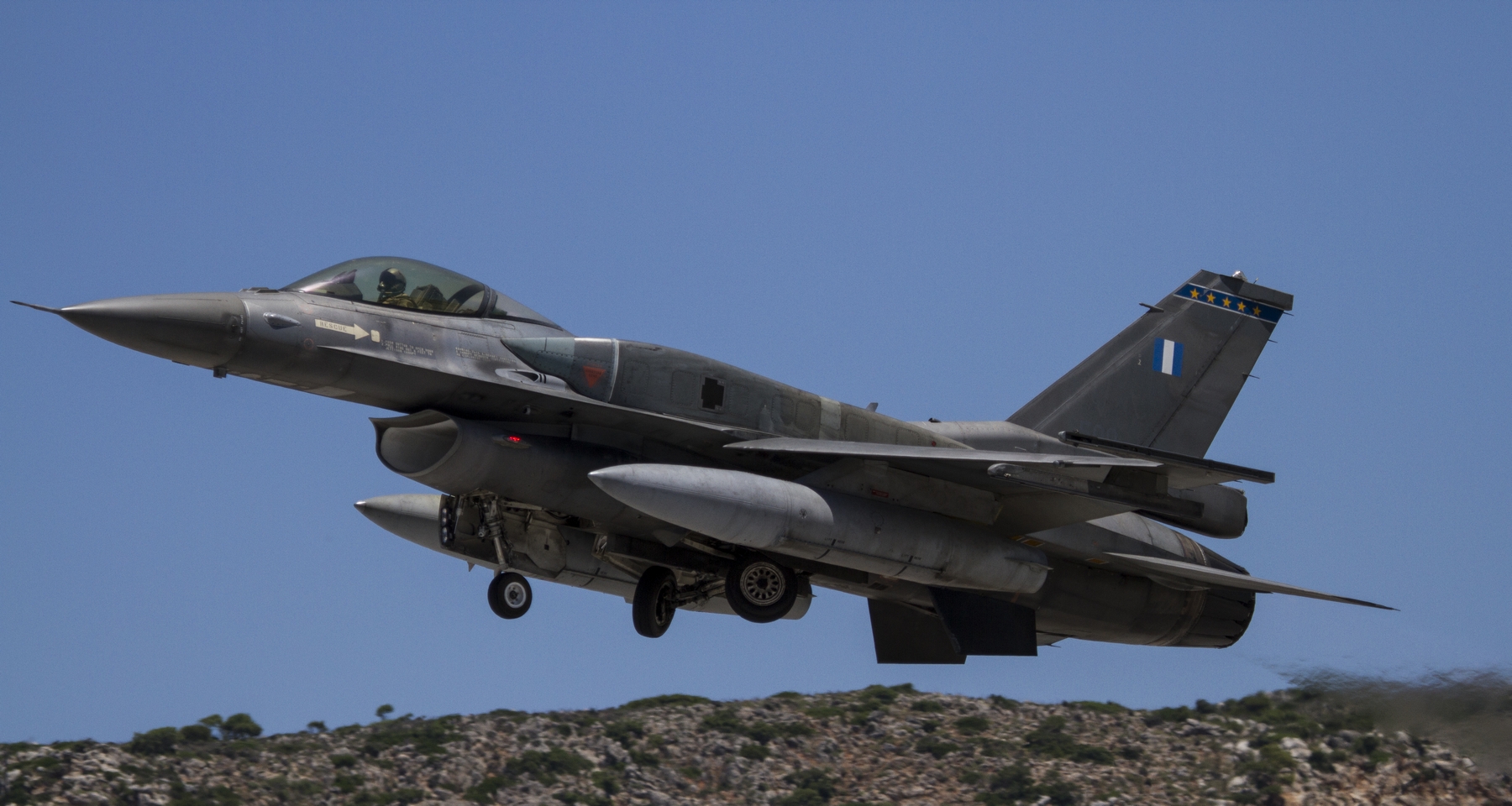 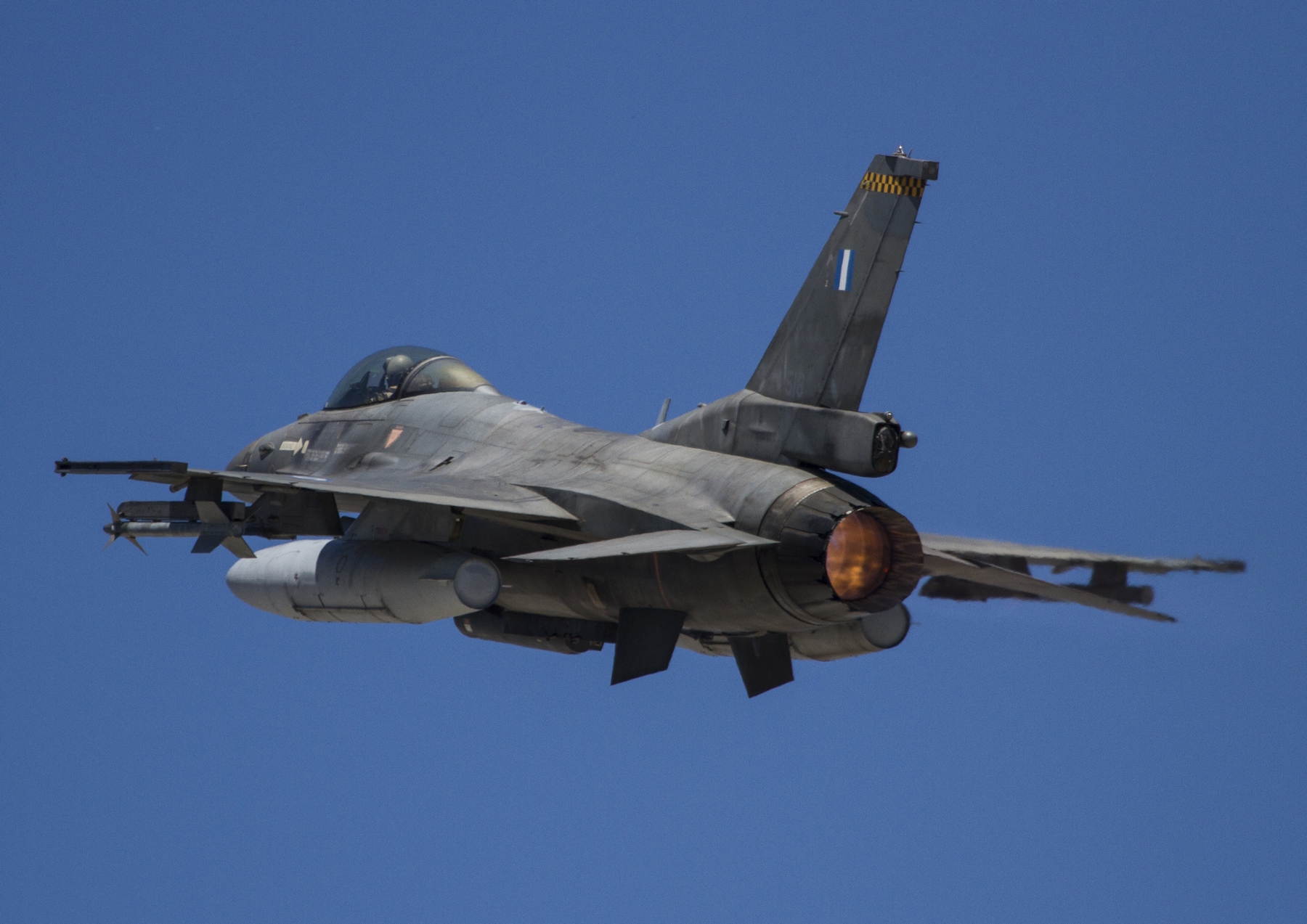 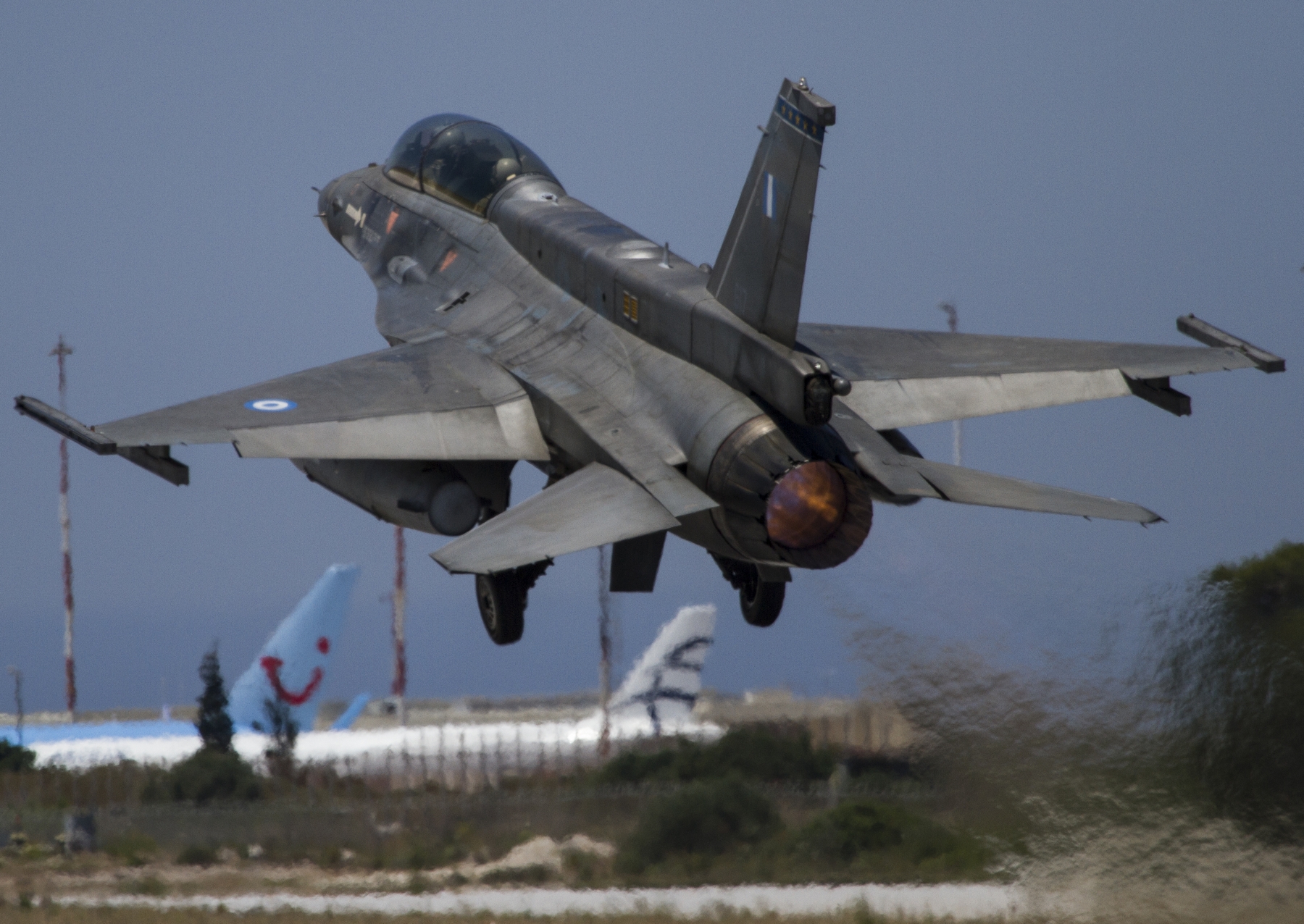 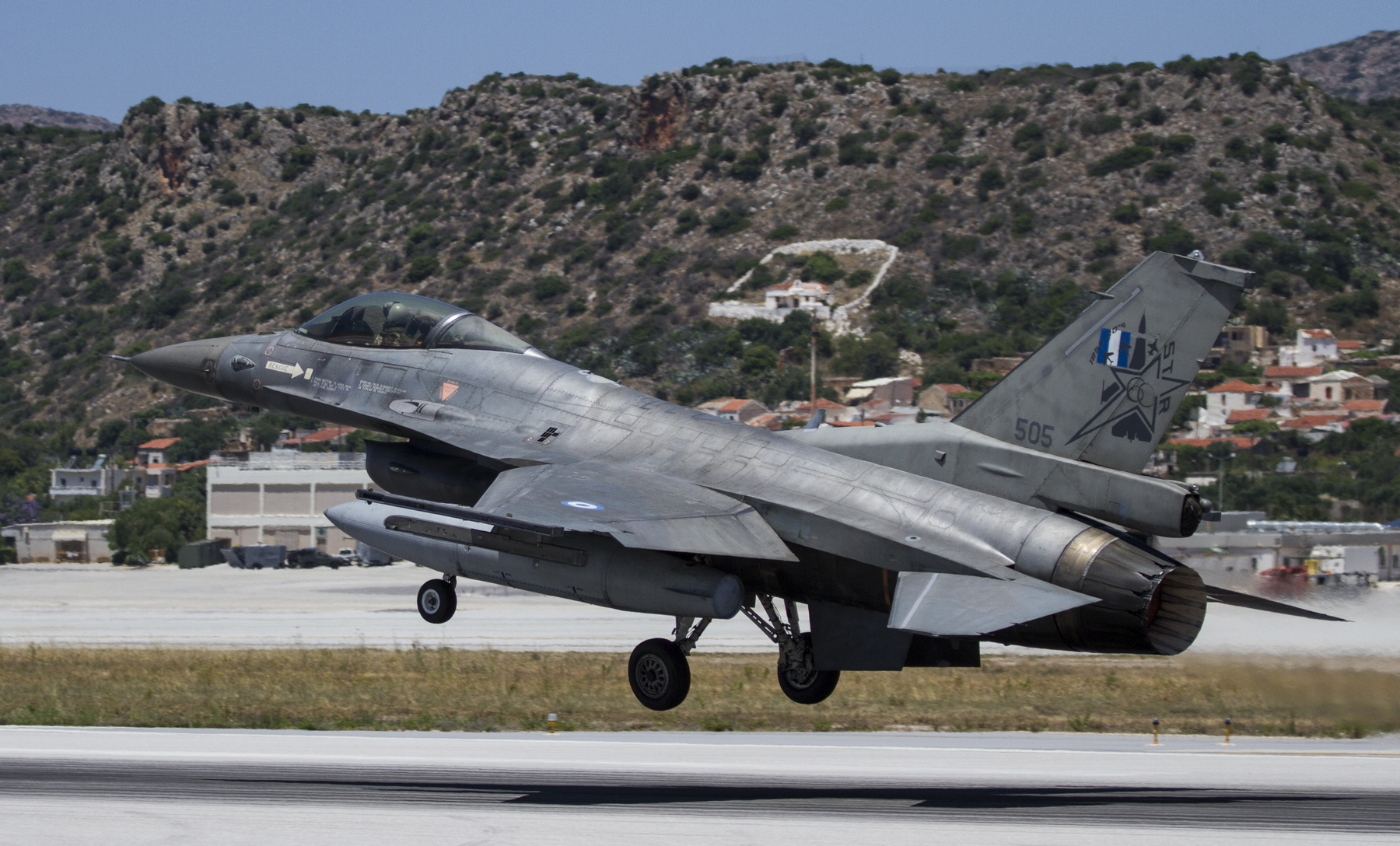 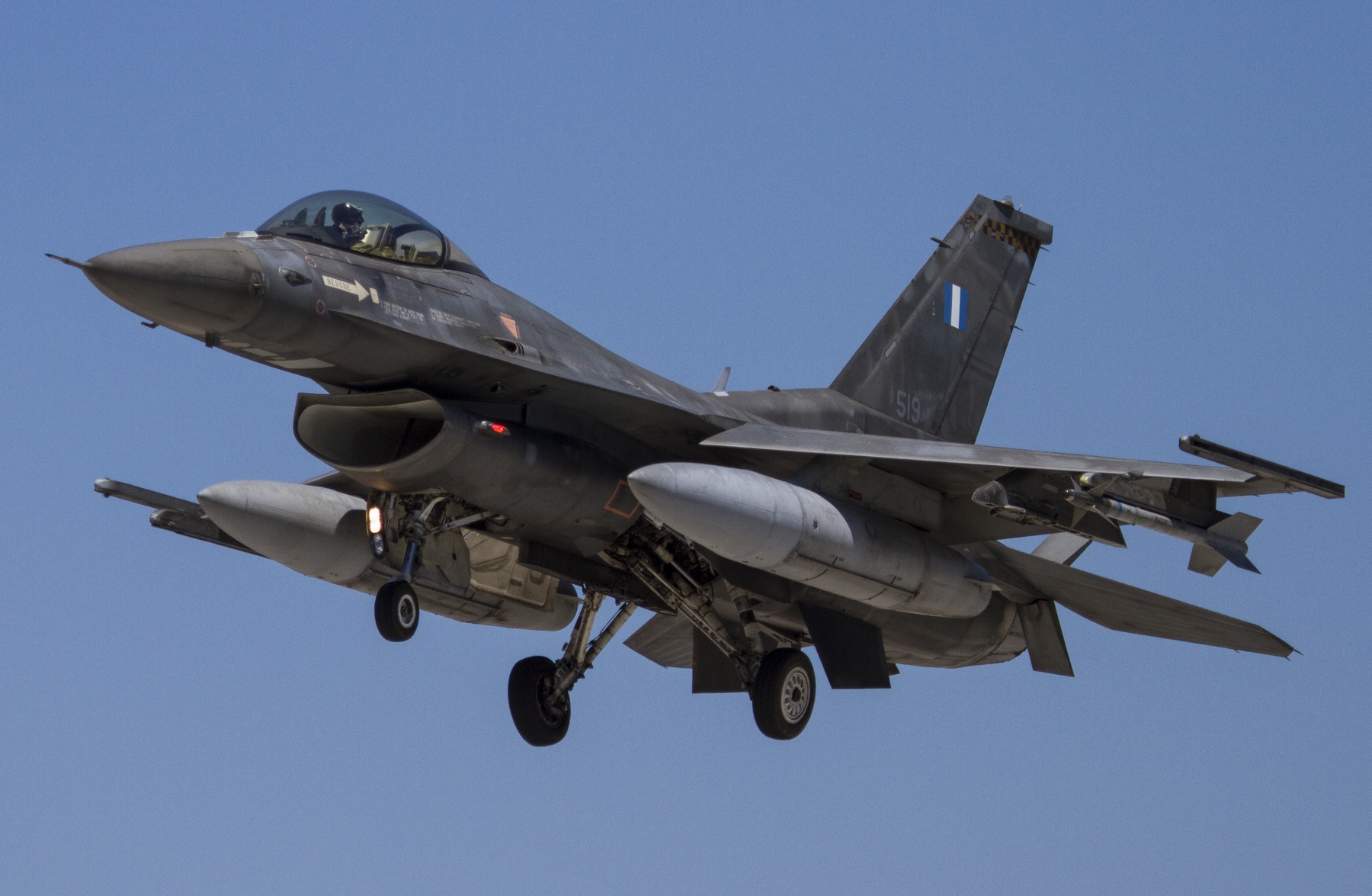 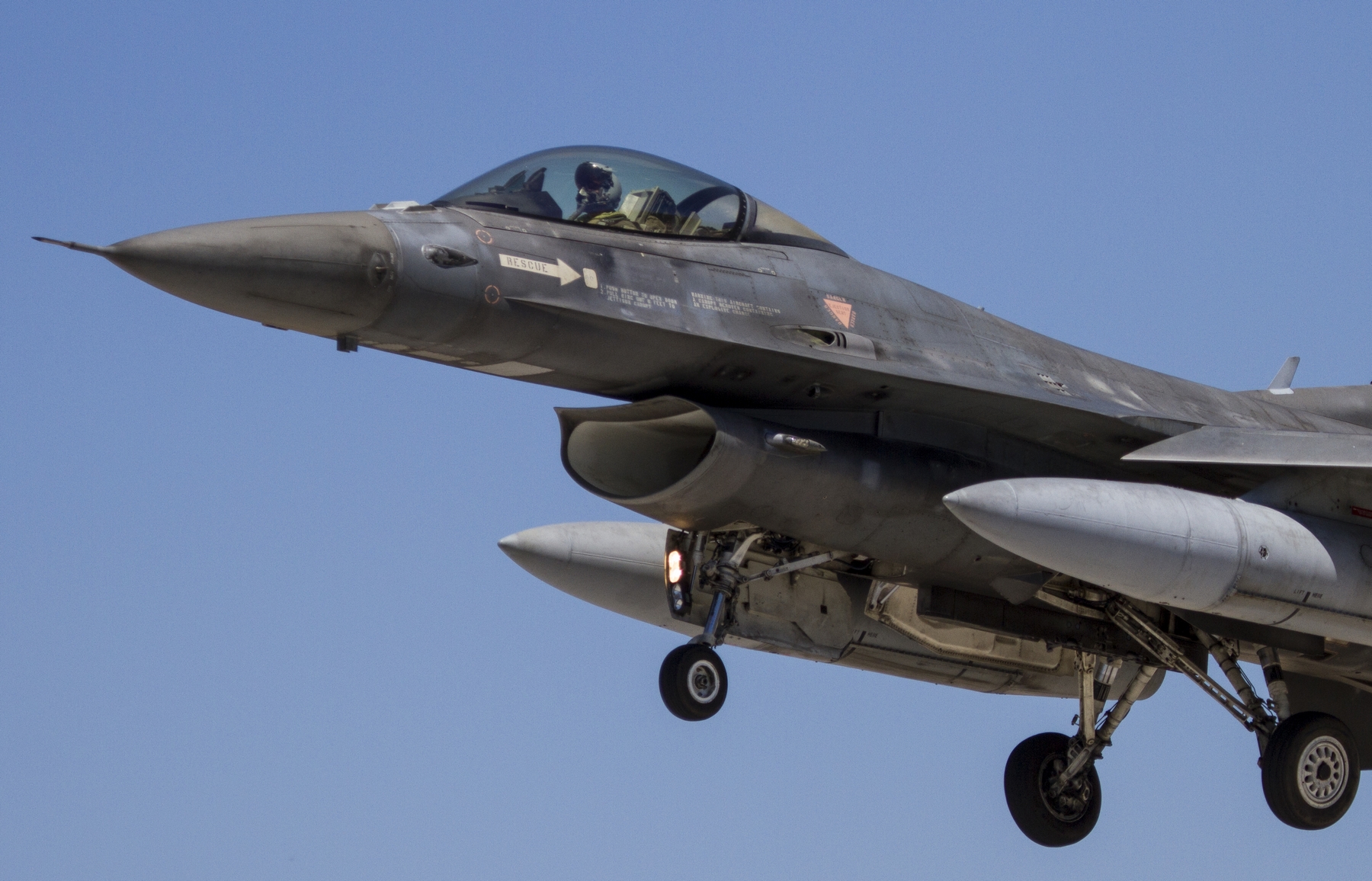 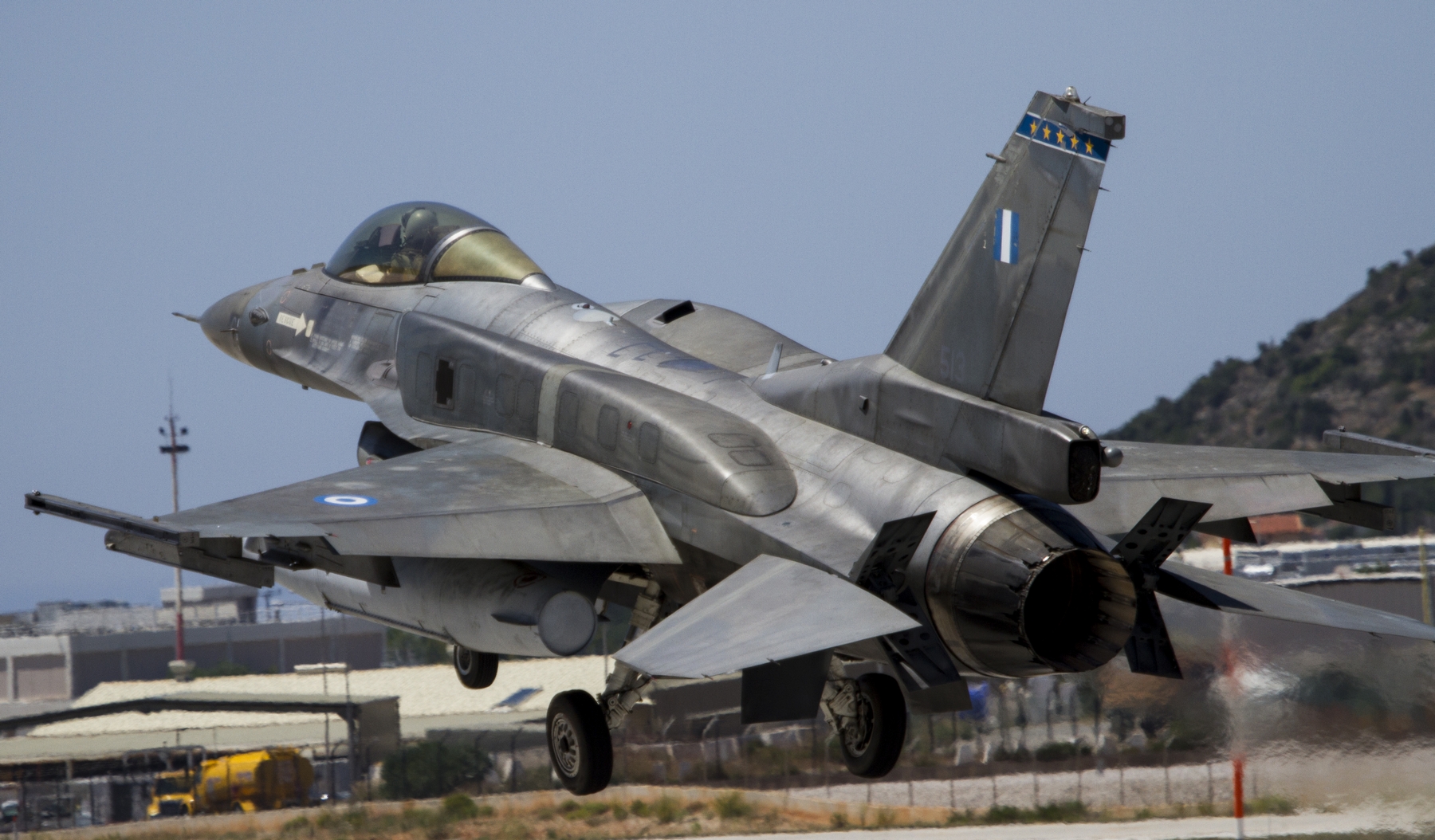 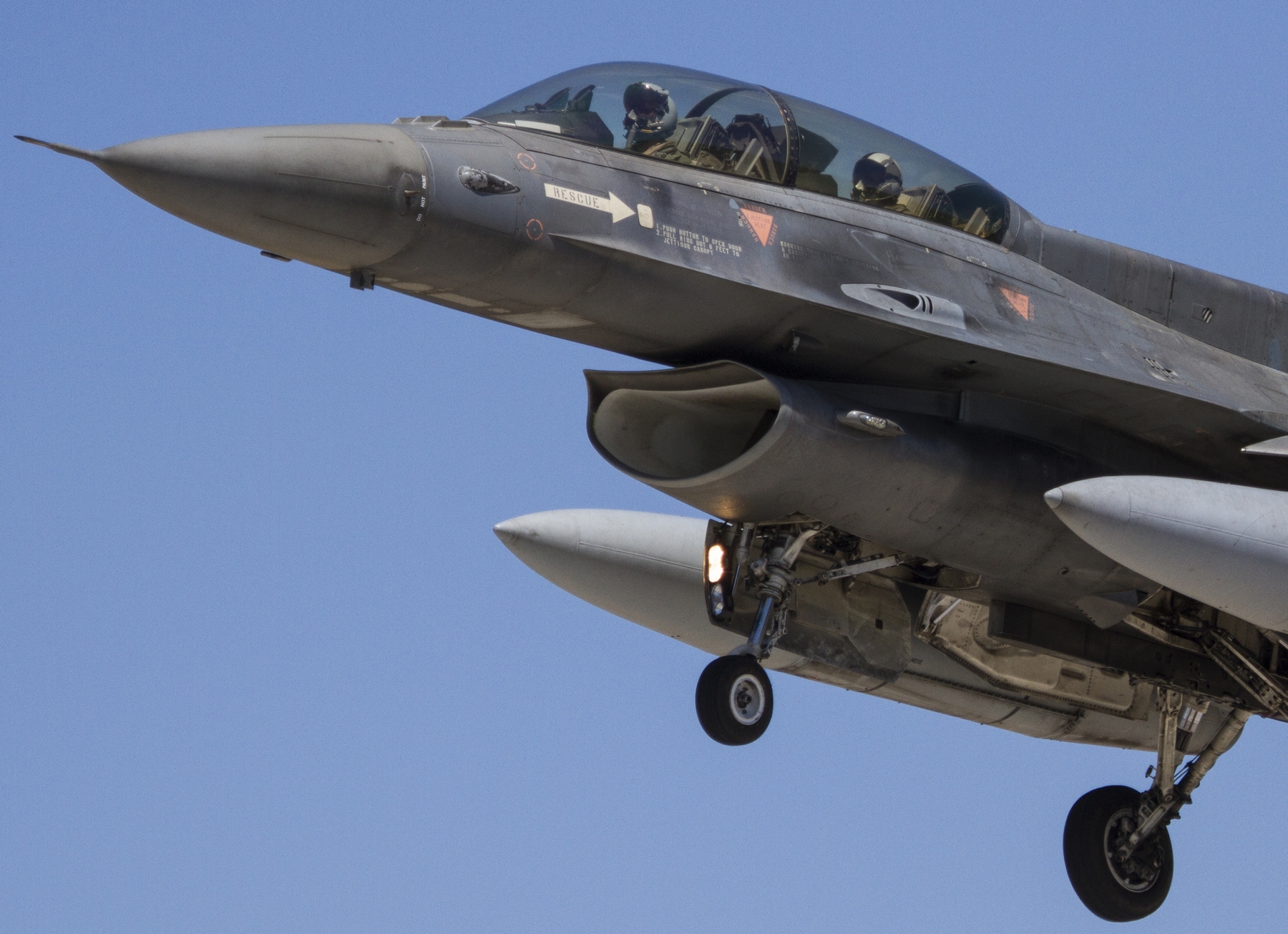 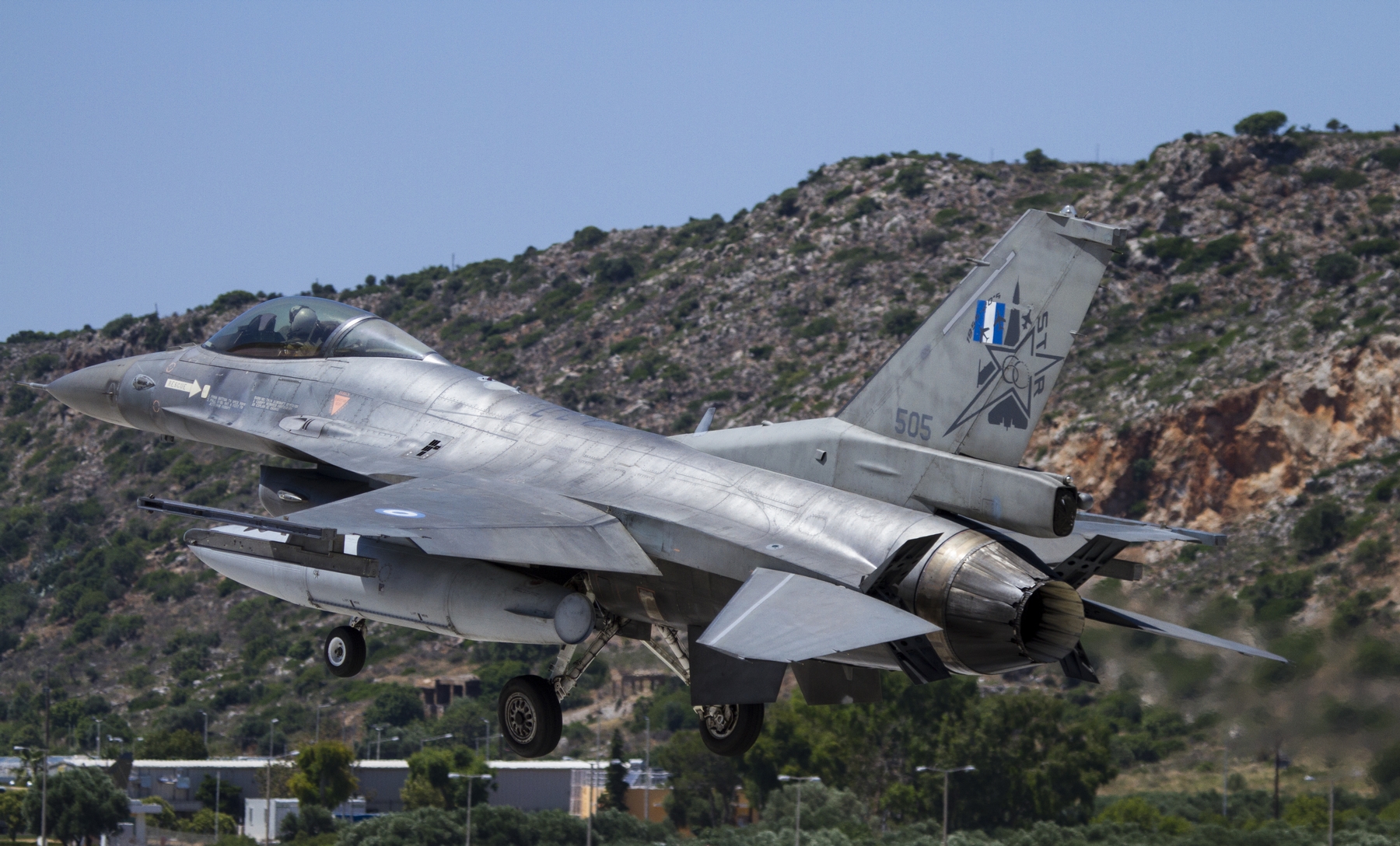 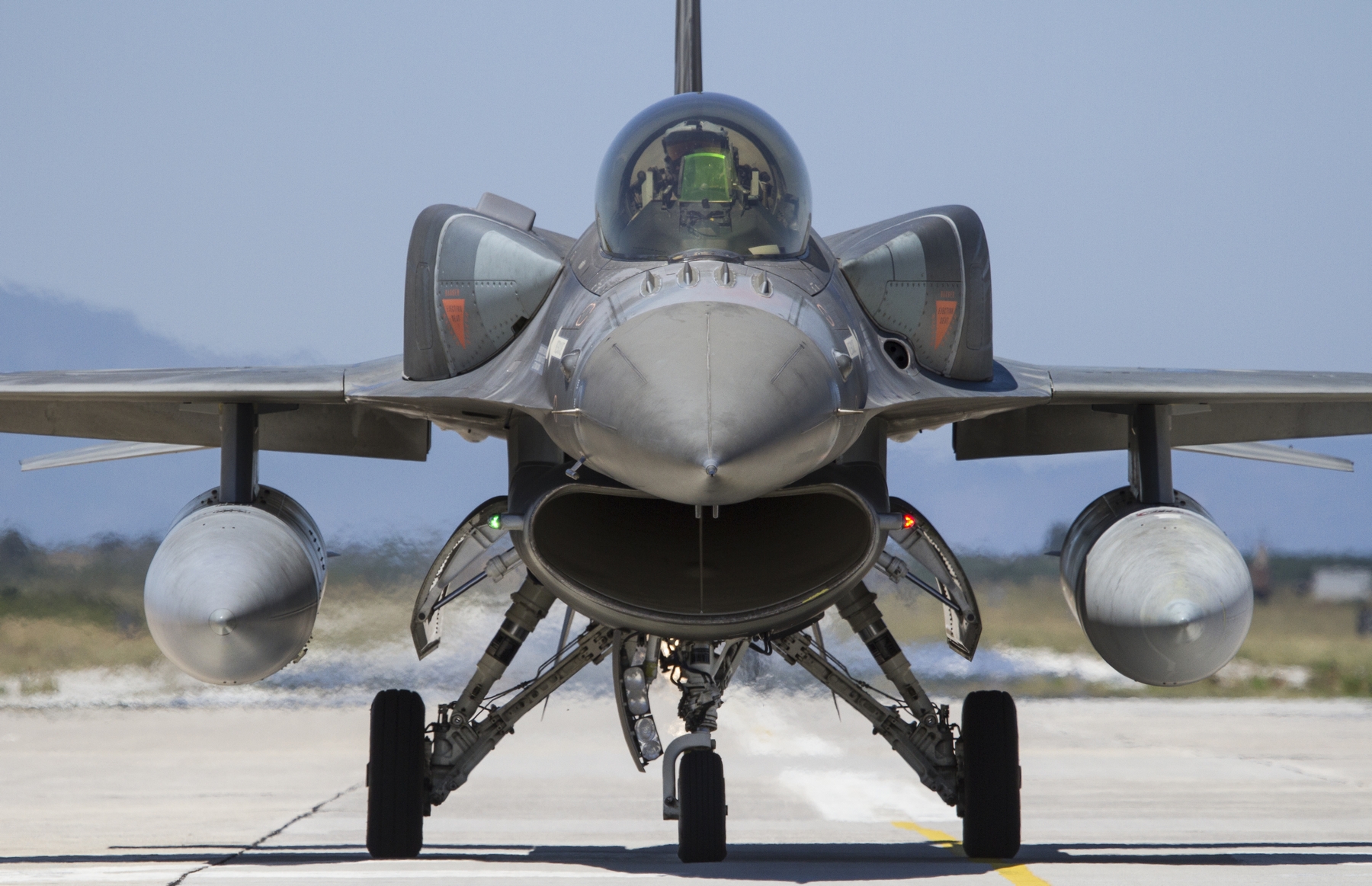 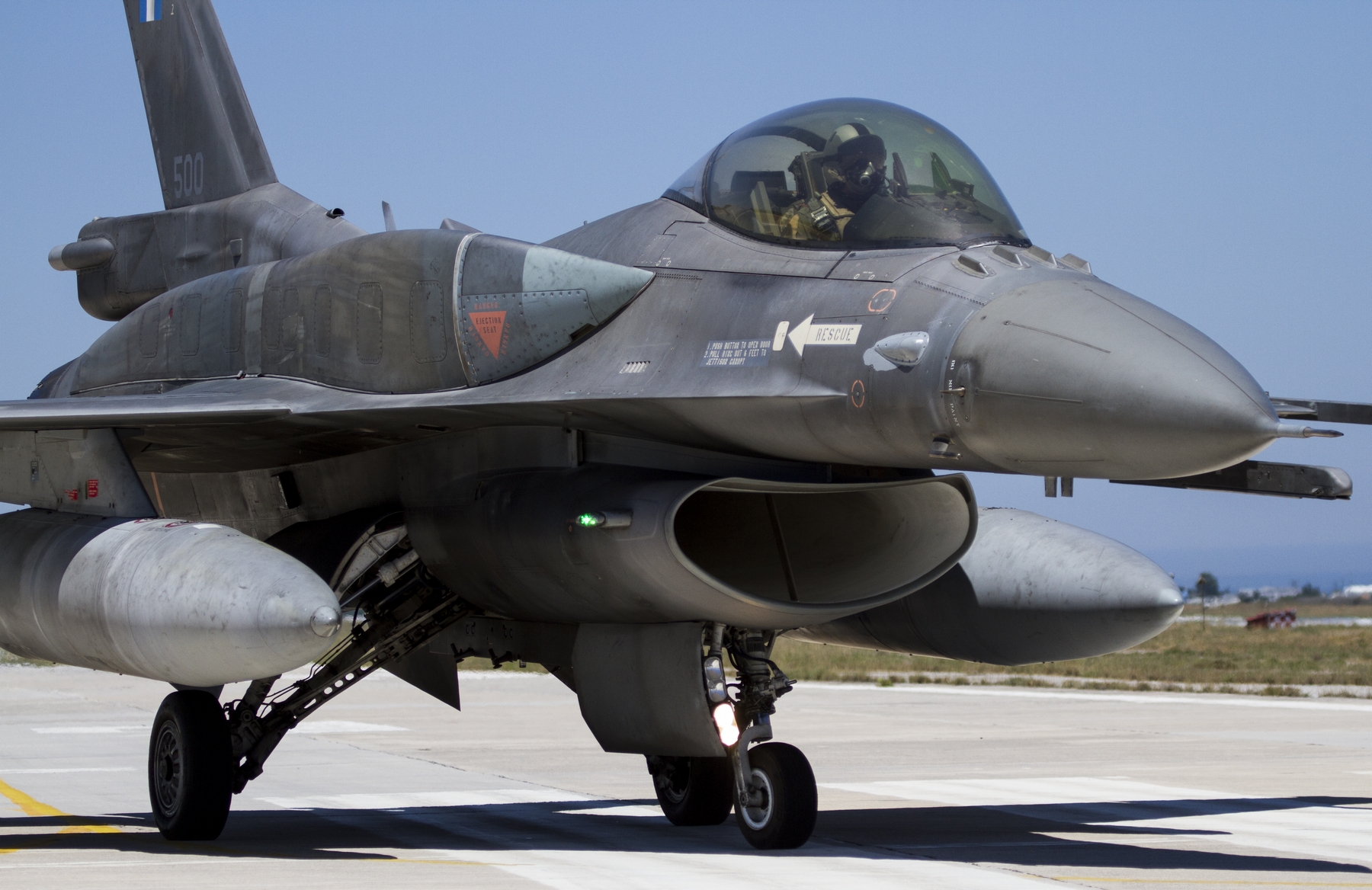 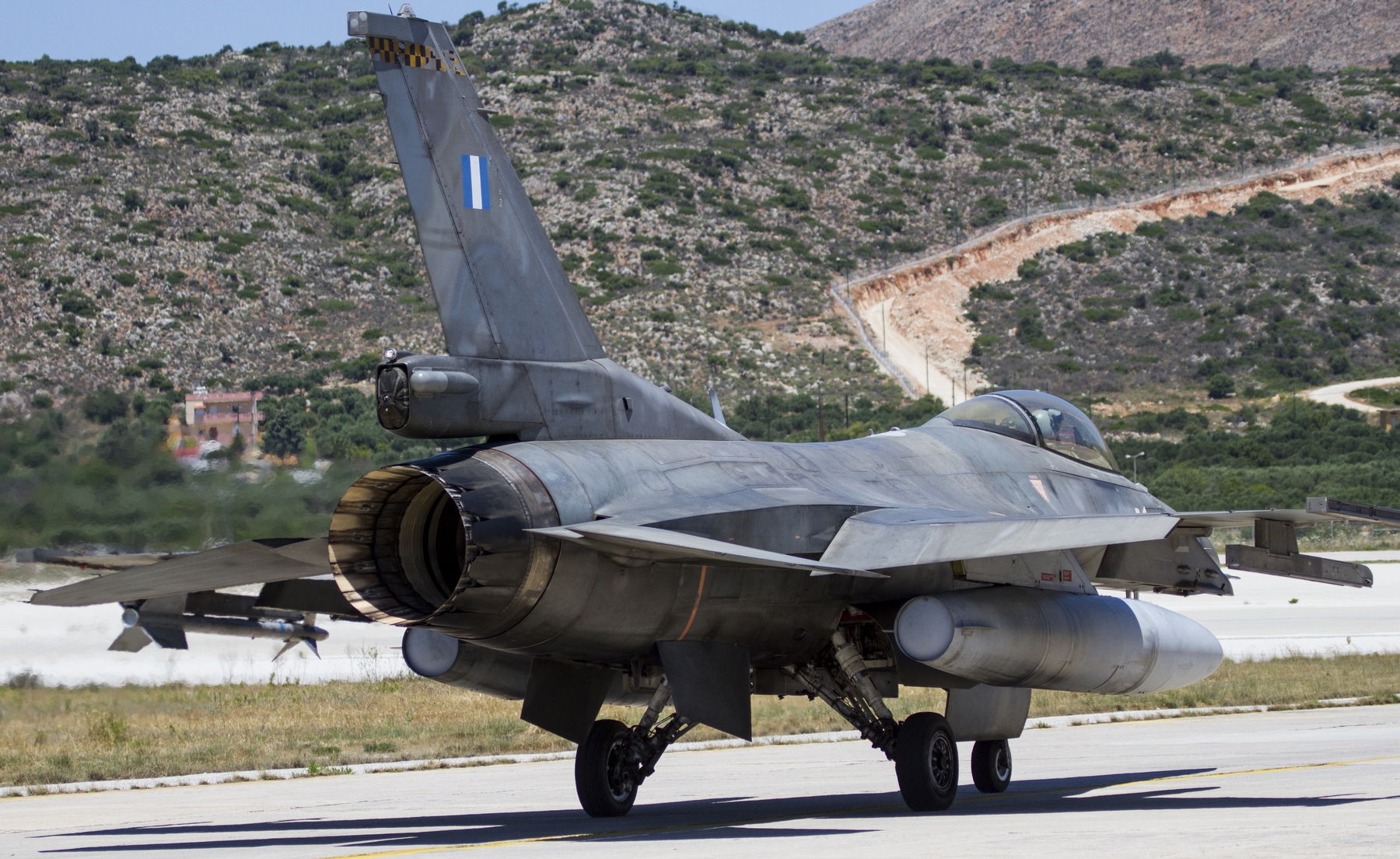 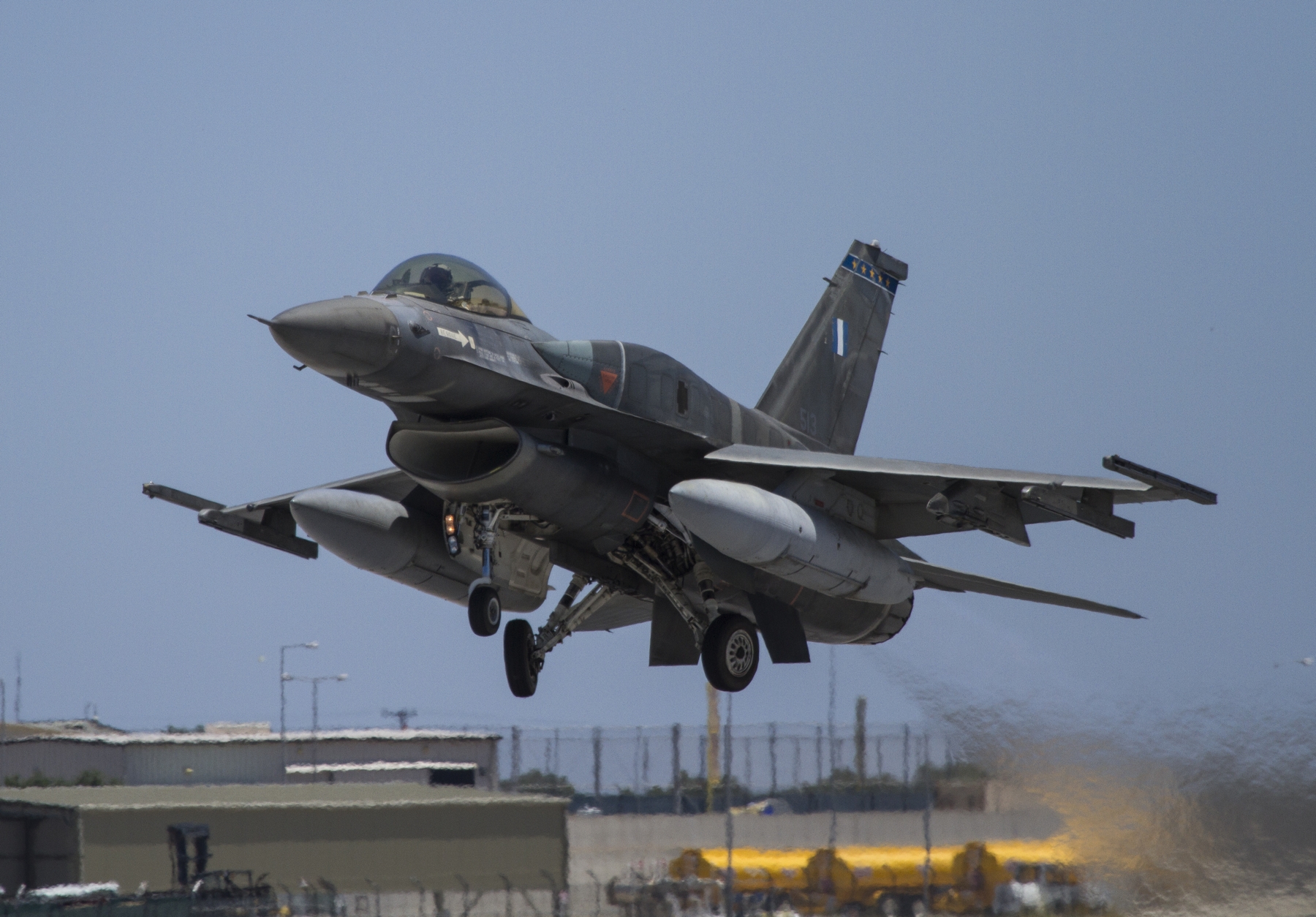