The Grumman F-14 Tomcat : Warrior of the Cold War

The Grumman F-14 Tomcat : Warrior of the Cold War

Photos and captions by Ed Rivera

For many Generation X’ers, the love of the F-14 Tomcat began with the 1986 movie Top Gun. Top Gun showed moviegoers what American air superiority was all about, Tomcat style. Top Gun was one of the most popular movies of the 80’s so many people were exposed to the F-14 Tomcat, it’s looks and it’s capabilities. Many aviation enthusiasts and aviation photographers already had a deep love for the Tomcat as it was dubbed by many as the “MiG Killer”. Whether it was the sleek looks, or the intimidating head-on profile, the F-14 Tomcat has left it’s impression on many and has become one of the most iconic aircraft the U.S. has ever flown. Aviation Photography Digest takes a look at the F-14 Tomcat, historically and visually.

Grumman had a long history of designing carrier based jets so it seemed fitting that Grumman would be tasked with creating an air superiority fighter designed to take on MiG aircraft flown by our cold-war enemy: the then-U.S.S.R. and it’s allies. 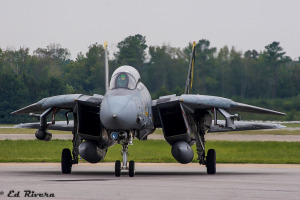 The ominous Tomcat stare – The VF-31 “Tomcatters” CAG taxiing back after performing for the crowd. NAS Oceana 9-10-2006

712 F-14 Tomcats were built. While the engineering and some assembly was from Grumman’s Bethpage, Long Island, New York facility, the bulk of production took place at Grumman’s Calverton, Long Island, New York plant. Just 22 months after receiving the contract, Grumman produced the first airworthy F-14 Tomcat. As a result of the competitive pressure felt during the Cold War, the U.S. Navy skipped the prototype phase and jumped directly to full-scale development. While the Pratt & Whitney TF30 engines proved to be troublesome for the earlier models, later models were equipped with General Electric F110 engines which were a better match for the aircraft. The F-14 Tomcat’s wings swept between 68 degrees and 20 degrees automatically depending on required airspeed. The wings could also be swept manually by the pilot if needed.

Phantom, the large, two-seat, variable-geometry wings, twin-engine aircraft would take on many roles within the U.S. Navy and become a true multi-role aircraft. What began as more of an air superiority fighter and long-range interceptor, took on other roles such as a reconnaissance aircraft and a strike fighter, which was also capable of strategic and tactical ground strikes as a bomber, and, eventually, close-air support. The F-14 Tomcat was very large, especially for a carrier aircraft. It was also heavy, at 65,000 lbs. fully loaded it was the largest fighter ever to be launched from a carrier. The Tomcat’s size was also an advantage. One of the strengths of the F-14 Tomcat was the amount of ordnance it could carry on a single mission. Fitted with an internal 20 mm M61 Vulcan Gatling-type cannon, the F-14 Tomcat could carry over 14,500 lbs. of total ordnance on multiple hardpoints beneath the aircraft. A LANTIRN targeting system could also be carried on the hardpoints in the case the aircraft was needed for precision strikes and a Tactical Airborne Reconnaissance Pod System (TARPS) could be deployed if needed for reconnaissance missions. 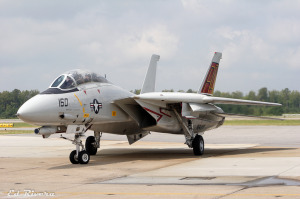 The Cold War was referred to as the “Cold War” because it was just that: a cold war. Other than the intense competition to produce the more “superior” weapons of war, there was not much that took place in terms of traditional battles. Sure, there are many legends (or facts) about several near-misses (or near-hits) that brought the U.S. and the U.S.S.R. on the brink of a nuclear war, but, obviously, nothing ever materialized.

The same truth can be said for the F-14 Tomcat and it’s role during the peak of the Cold War. One incident occurred over Libya in 1981 where the F-14 Tomcat was credited with shooting down two aircraft. Another occurred in 1989. On January, 4 1989, off the coasts of Libya, two F-14A’s, were confronted by two Libyan MiG-23 Floggers. After a six to eight minute air battle, the MiG’s were declared hostile and the F-14’s were cleared to engage. One of the F-14’s destroyed one of the MiG-23’s using an AIM-7 Sparrow missile. The other F-14 was able to use an AIM-9 Sidewinder and destroy the other MiG-23. Both MiG pilots ejected safely. Overall, F-14 Tomcat’s are credited with shooting down only five enemy aircraft.

While the F-14 Tomcat may have never earned the “MiG Killer” moniker, the F-14 proved invaluable in other roles during it’s history. The F-14 Tomcat played a part in conflicts such as the First Gulf War, Afghanistan, and Operation Enduring Freedom. For example, throughout these conflicts the F-14 was used for precision bombing. It’s large payload capacity, along with it’s targeting capabilities, allowed the F-14 to be resourceful as a precision bomber. In a 2001 article in Naval Aviation News, Cdr. Bill McMasters stated that: “the Tomcat makes an excellent air-to-ground aircraft. It has great range and endurance, is fast, carries a lot of ordnance and can recover aboard the carrier with most of those weapons still attached. It is a much better bomber than originally thought”.  In addition to precision bombing, upgraded with technology that would allow ground forces to utilize the F-14’s reconnaissance capabilities, the F-14 Tomcat was also used in a role as a Forward Air Controller. Ground units were able to see “real-time” imagery at the same time as the F-14 was gathering it.

With the McDonnell Douglas F/A-18 becoming the fighter of choice for the U.S. Navy to use protect it’s fleet and factors such as the F-14 Tomcat being the most expensive fighter to maintain, a decision was made to retire the aircraft. On March 10, 2006, VF-31 “Tomcatters” and VF-213 “Black Lions” took their last fly-in to NAS Oceana in Virginia, USA in their Grumman F-14D Tomcats. With it’s last combat flight on February 8, 2006, the F-14 Tomcat was officially retired eight years ago on September 22, 2006.

Today, if one wants to see an F-14 Tomcat, they will have to settle for a museum display piece. The only country that has airworthy F-14’s is Iran. Since the sale of the F-14’s was made to Iran when the last Shah was in power and the country is now run by the Ayatollahs, the U.S. Department of Defense announced that sales of spare F-14 parts would be suspended over concerns that the parts may end up in Iran. As a result of this decision, specifically, the fear of spare parts making it to Iran, any remaining F-14 Tomcats were destroyed. 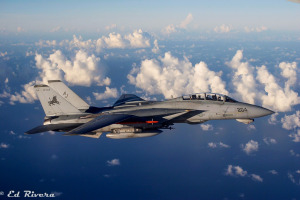 The photographs that accompany this article help foster a continued appreciation for the F-14 Tomcat. All of these wonderful photos were taken by the same photographer: Ed Rivera. Ed has been an aviation photographer for almost 20 years. He currently resides in New Jersey, but he has lived in Puerto Rico for a few years when he was a child. Puerto Rico is where his appreciation for aviation began. Watching “PR”-tailed A-7D/K Corsairs flying low and fast over his parent’s home inspired his passion for aviation and a love for the A-7D/K.

Ed also has a strong appreciation for the F-14 Tomcat. From looks to performance, he loves everything about the F-14. It is because of this appreciation he was determined to capture some of the last days of the Grumman F-14 Tomcat. Ed spent time visiting NAS Oceana photographing the F-14’s arriving and departing and conducting air-to-air photo shoots with the Tomcats.

Through presenting his work, Ed hopes that you will gain the same appreciation for the F-14 Tomcat that he has.

Today marks the eighth anniversary of the F-14 Tomcat’s retirement. Moving forward, when you see a Grumman F-14 Tomcat at a museum or at a park, remember that this iconic aircraft was once a proud warrior of the Cold-War Era.

Steven can be reached at: [email protected]
Ed Rivera

Photojournalist at Aviation Photography Digest
Born in New York, NY, Ed moved to Puerto Rico when he was 9 years old. It was in Puerto Rico where Ed's love for military aviation began. Watching the A-7's of the Puerto Rico Air National Guard (PRANG) inspired Ed to take up aviation photography in 1989 with a small point-and-shoot camera.

Before the retirement of the F-14 Tomcat, Ed had multiple air-to-air photo shoots with the Tomcats of NAS Oceana. He has also covered many Red Flag exercises at Nellis AFB.

Ed can be reached at [email protected]