The second biannual Diamond Shield exercise is one of the practical components of the air warfare instructors’ course (AWIC) which this time started in December 2018 with a theory based program developed and held in Canberra. Those participating in the course are hoping to graduate and become experts in Australian Defence Force capabilities and integration across the services, and have technical mastery of their own roles, platforms and systems.

In 2017 it was the first time the Royal Australian Air Force brought together different airforce squadrons in the warfare space to integrate their roles in a process of continuous improvement to match the fifth generation platforms coming into service.

Now that process of integrating 5th generation platforms is well under way as highlighted by the arrival of the F-35A Lightning to RAAF Base Williamtown in December, the 2019 exercise has grown and expanded the potential benefits and training of a 5th generation airforce these graduates can utilise in the future.

With the development of the AWIC, Exercise Diamond Shield will prepare the graduate instructors from all squadrons participating to be effective in the integrated Air Warfare space, training them to work as a cohesive team when called upon to work together or to work within their assigned squadrons.

Prospective graduates will provide leadership in the development of future tactics and help determine how those tactics can be used to enhance the Australian Defence Force’s joint war fighting capability using fifth-generation platforms from F-35A and P-8A Poseidon through to working with and being fully integrated with the Australian Army and Navy.

This year’s Diamond Shield exercise was by far the biggest yet with 80 aircraft participating from 12 different squadrons and supplemented by various adversary aircraft from Airservices Australia such as Lear Jets and Alpha jets leased from Top Aces in Canada.

Similarly to 2017 the United States Air Forces 18th Aggressor Squadron from Eielson Air Force Base near Fairbanks in Alaska deployed to Williamtown with 12 aircraft and over 120 personnel consisting of pilots, maintainers and operation staff.

Their deployment to Australia was apart of their western Pacific tour that encompassed exercises Sentry Aloha 18-1 at Hickham Air Force Base in Hawaii (January), and Cope North 2019 at Andersen Air Force Base in Guam (February).

The 18th Aggressor pilots are key components in providing a replicated threat for the students of the exercise which is a Counter Defensive Air exercise, and are tasked specifically through the use integrating their primary platform the F-16 Fighting Falcon to pose a formidable ‘Red Air’ threat.

‘Blue Air’ refers to friendly forces while ‘Red Air’ applies to those mimicking enemy forces. The objective of this training format is to challenge Blue Air pilots to anticipate and become more receptive to real-world enemy forces they could potentially encounter during a national or international security threat. 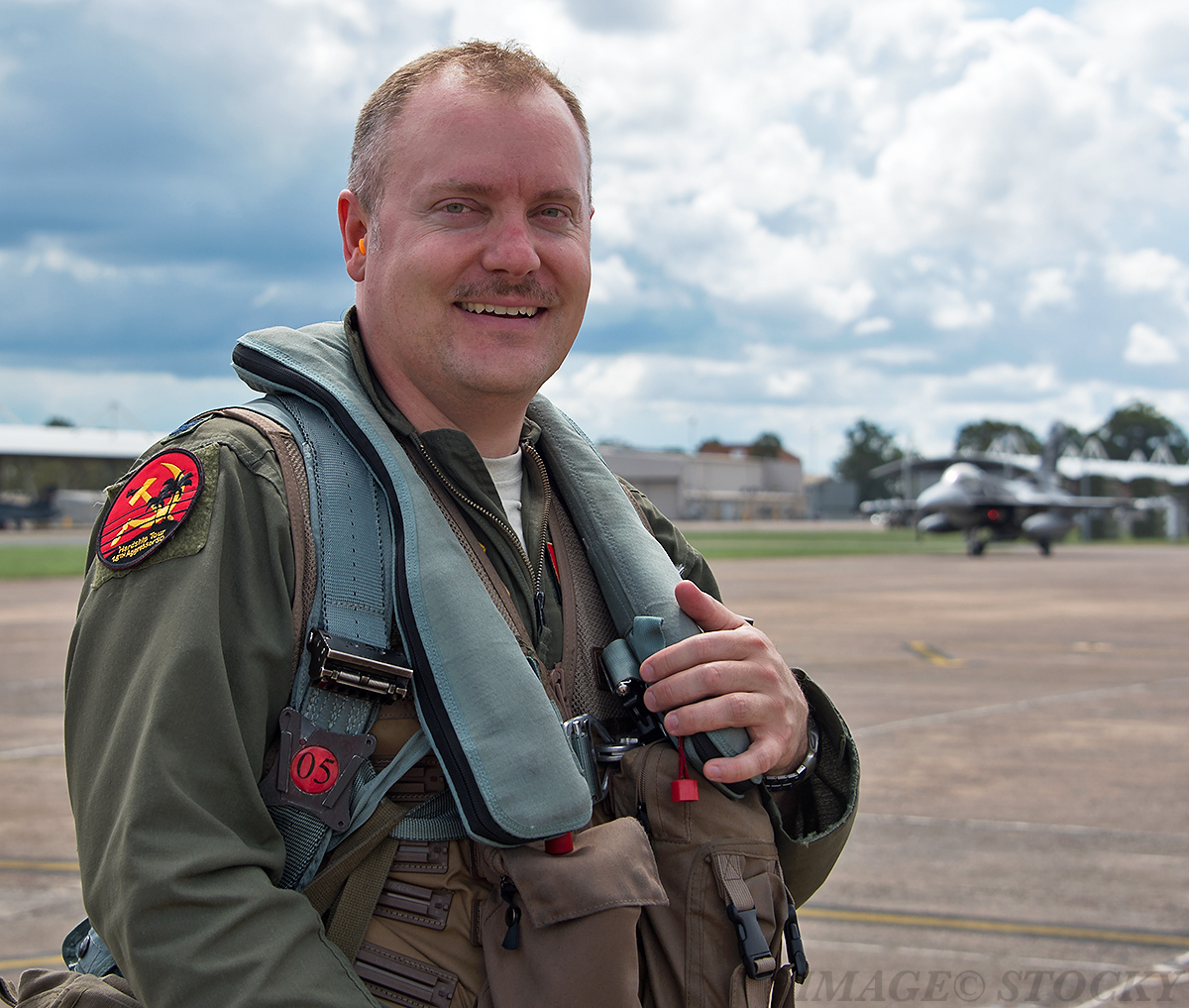 APD spoke to Lieutenant Colonel Jason ‘Majik’ Monaco the Commanding Officer of the 18th Aggressor Squadron to gain understanding on the role and scenarios that are being played out by the Aggressors during Diamond Shield 2019.

“Well it’s been a really great exercise for us working with our Australian counter-parts and to help train them to become better and gaining better interoperability between both nations as well.” He says.

“So we are here for the air warfare instructors course which is the Australians version of our weapons school in the United States, and we are here to play as adversaries for this exercise.”

“So it’s all about the ‘Blue Air’ training for the F/A-18 pilots here at Williamtown.”

As new personnel have been added to the squadron since the last time the 18th visited Australia in March 2017, and ones have left the squadron, have the new team members been able to integrate with their Australian counterparts?

Lt.Col. Monaco explains, “Well we’ve integrated really well we have a few people on this trip that were here in 2017 and also we have been getting a excellent briefing with the exercise control team here at Williamtown with (RAAF) 88 and 77 squadrons, they have helped us bed down and it has been seamless integrating with them once we are up flying with the F/A-18’s and other assets participating as red air.”

The primary role for the 18th is to replicate real-world threats, be it specific to an aircraft or weaponry. Since they are flying the General Dynamics F-16 Fighting Falcons they are not actually transforming the aircraft into a Shenyang J-11 or a Mikoyan MiG-29 for instance, but they use their own Aggressor Threat Replication (ATR) guide in order to provide replication tactics on how they can adjust their avionics or how they might employ those avionics with the F-16s in order to better emulate a requested adversary by the exercise commanders.

Although it runs only every two years, the 6 month AWI course is a vital part of training for its already experienced F/A-18 Hornet students with Diamond Shield being one of the practical exercises. For the Australian Defence Force, the role of the 18th AGRS means prospective graduates who are experts, capable of integration across the services and whom have technical mastery of their own roles, platforms and systems. 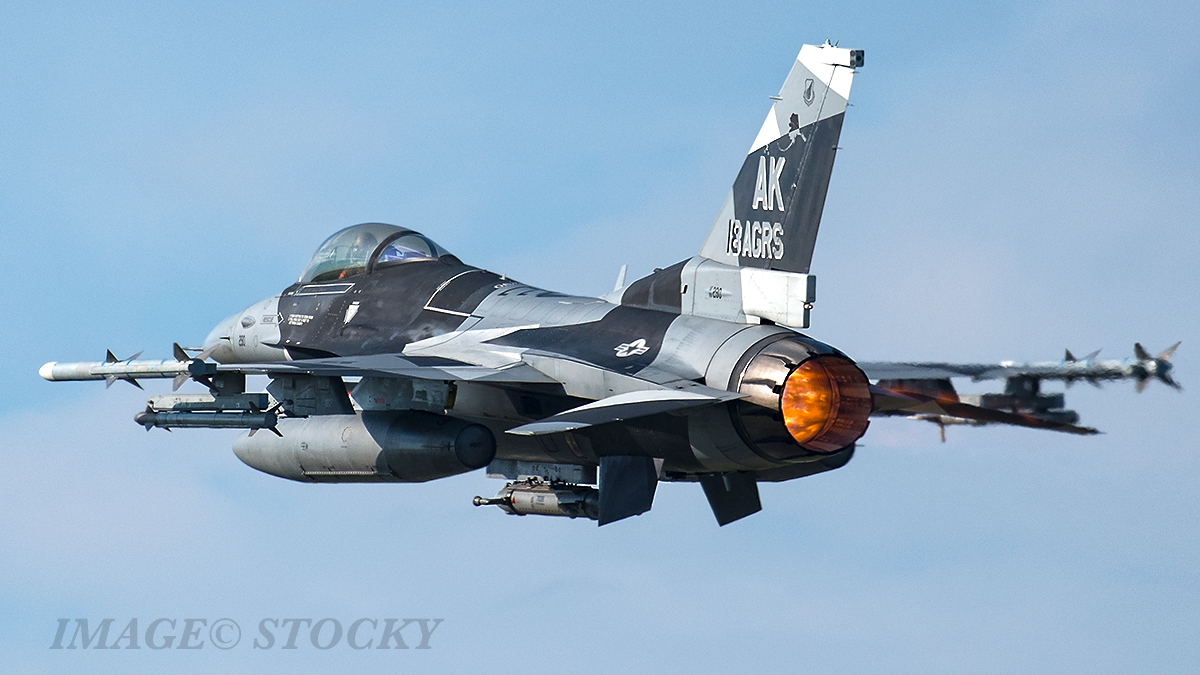 The 18th AGRS are some of the best at providing threats, threat replication and for providing the ‘Red Air’ instruction but for the students the big thing for them is the different aircraft type and the different types of things they can represent. It is different from what they are used to seeing in their normal training.

Although the 18th AGRS ‘Red Air’ pilots don’t necessarily integrate with the ‘Blue Air’ students participating in Diamond Shield, their unique aircraft capabilities, tactical strategies and ability to exploit plans carried out by ‘Blue Air’ provide valuable insight during mission debriefs and exemplifies the interoperability intended by both the AWIC and the Diamond Shield exercise.

This year further Red Air threats have been added to the exercise with the inclusion of the U.S. Airforce’s 23rd Bomb Squadron from Minot Air Force Base in North Dakota. The ‘Barons’ deployed two B-52H Stratofortress aircraft to RAAF Base Darwin and were acting as offensive strike aircraft.

Lt.Col Monaco explains what the 18th role has been working in with the B-52’s as apart of a bigger Red Air threat.

“They are deployed from Darwin so they leave fairly early in the morning and then they meet us in the airspace.”

“Before that though we liaise with the detachment in Darwin to give them the mission products they integrate with the scenario then they form with us to provide that red air threat.”

Asked what a typical mission would like for the 18th during Diamond Storm the commanding officer explains.

“Well the mission this morning one of our pilots from the 18th was mission commander for the scenario, and our mission was to pose as an aggressive force which has to make the AWIC students defend against us.”

He continues, “We all speak the same language here either working with say the Hawk Mk.127’s from 76 Squadron or the 23rd Bomb Squadron, we all know how to coordinate and we can all work together even when we work together as Red Air components it validates our role here at Diamond Storm.”

The process of the exercise is to observe the Blue Air pilots in either real-time or through observations made by the 18th AGRS personnel while training them and ultimately exploiting and punishing the errors in the air made by Blue Air. Later, when pilots return all debrief and reconstruct the entire mission.

The RAAF pilots have the ability to find where those critical breakdowns occurred in their game-plan and hopefully next time adjusting that plan so those errors aren’t then exploited, or are at least mitigated from that type of exploitation in the future. 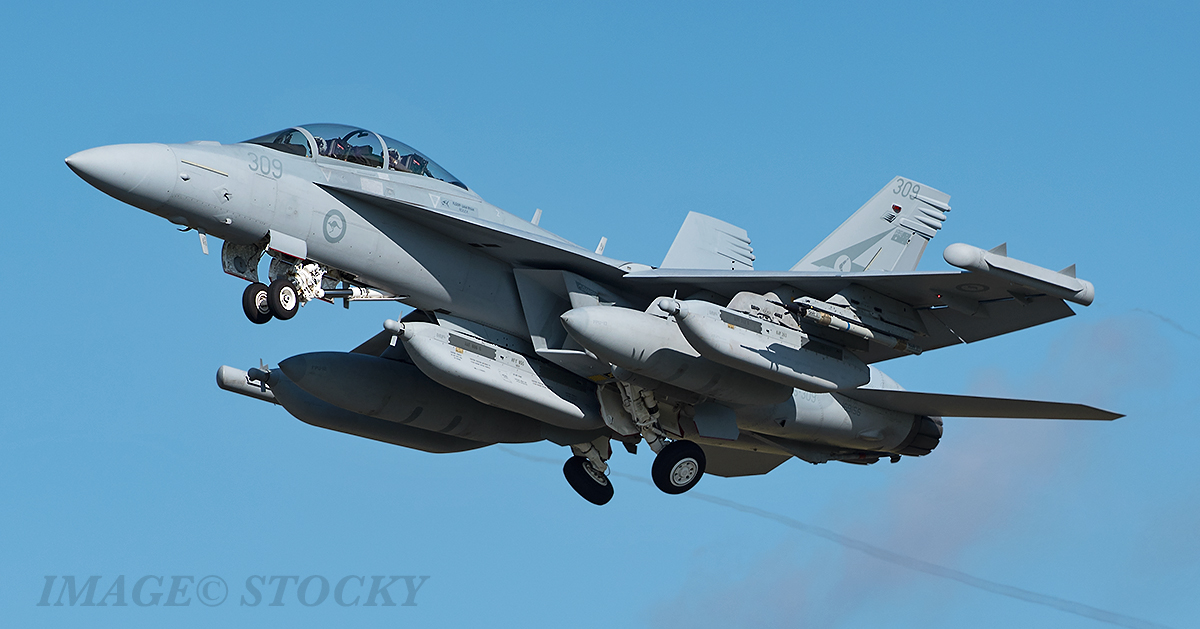 This very process is the foundation of Exercise Diamond Shield, and quite fundamental to the intent of the 18th AGRS overall mission. Their ability to tailor and design to a joint or allied nations desired learning objective is also matched by their ability to perceive real-world events and then communicating that to their joint partners.

At the culmination of Diamond Shield, the key objective for the RAAF is advancing and sustaining interoperability throughout the Pacific region, while respectively, for the U.S. Air Force, it is also about increasing the capabilities of the pilots charged with providing this world class training.

Both Australians and United States personnel routinely reference interoperability, making a plan that can operate a high level with any joint partner and the closer partners. In exercises like Diamond Shield it is very easy to explain and bring people into the loop, it’s very robust and the 18th Aggressors support has been important for developing new tactics .

For a number of potential graduates that have the chance to go back to the Combat Air Force, interoperability and joint integration with their RAAF partners at Diamond Shield will help these pilots as they go back to their units.

Knowing they might have seen errors in ‘Blue’ game-plans – be it planning or execution errors – as prior adversaries, they could potentially exploit those errors so they can apply learned tactics to avoid what they saw exposed while here in the 18th AGRS and enhance the overall Air Force capabilities.

It requires remarkable skill, dedication and discipline to become a military pilot. Despite the nation’s colours that don an aircraft’s fuselage, or what service affiliation rests on the chests of its aircrew, a military pilot is a capable and readily accessible force for effectively responding to and neutralising a threat of any magnitude, at any time, or any place.

But it doesn’t come without hard work and extensive exposure to tactical exploitation by some of the most well-trained and experienced fighter combat instructors in the world and for the RAAF mixing it with the best adversary Squadron within the U.S. Air Force will go a long way in those participating in exercise Diamond Shield and overall in the AWIC course. 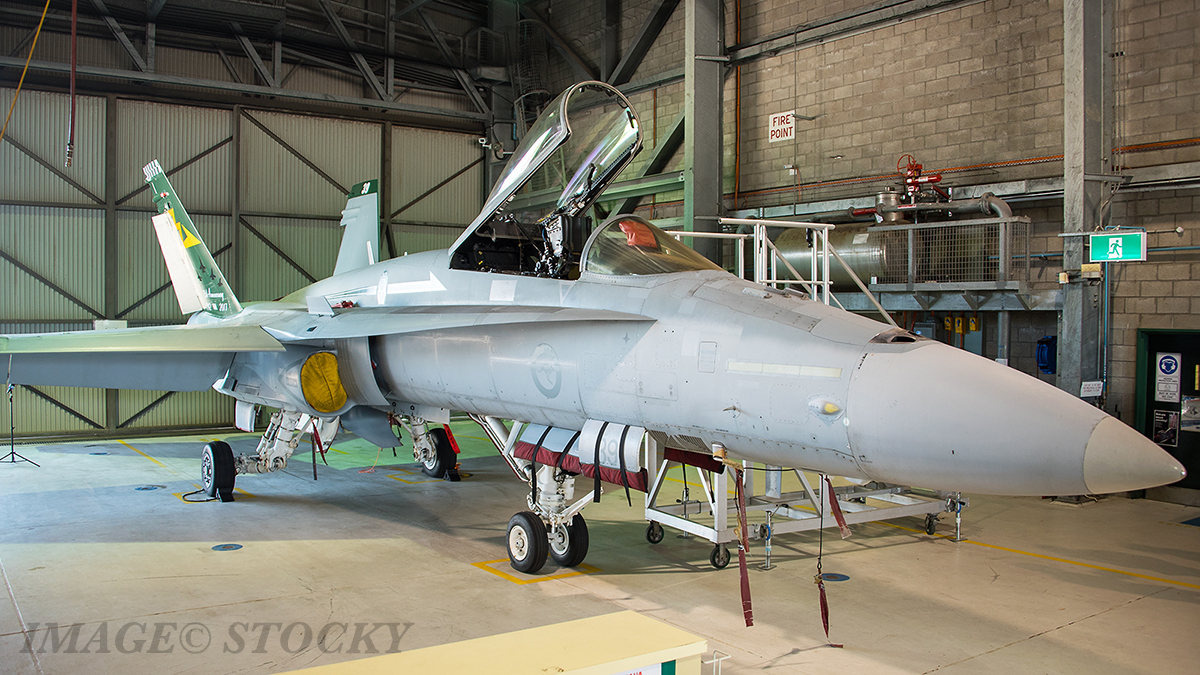 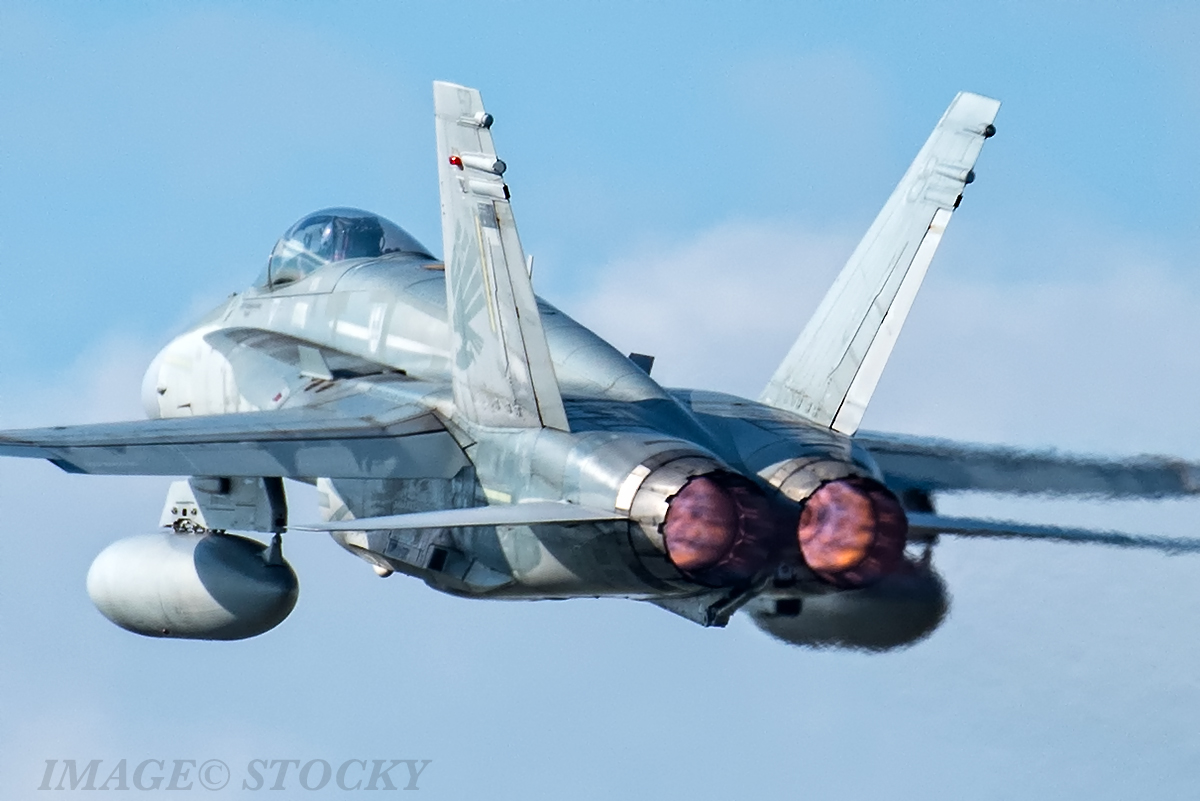 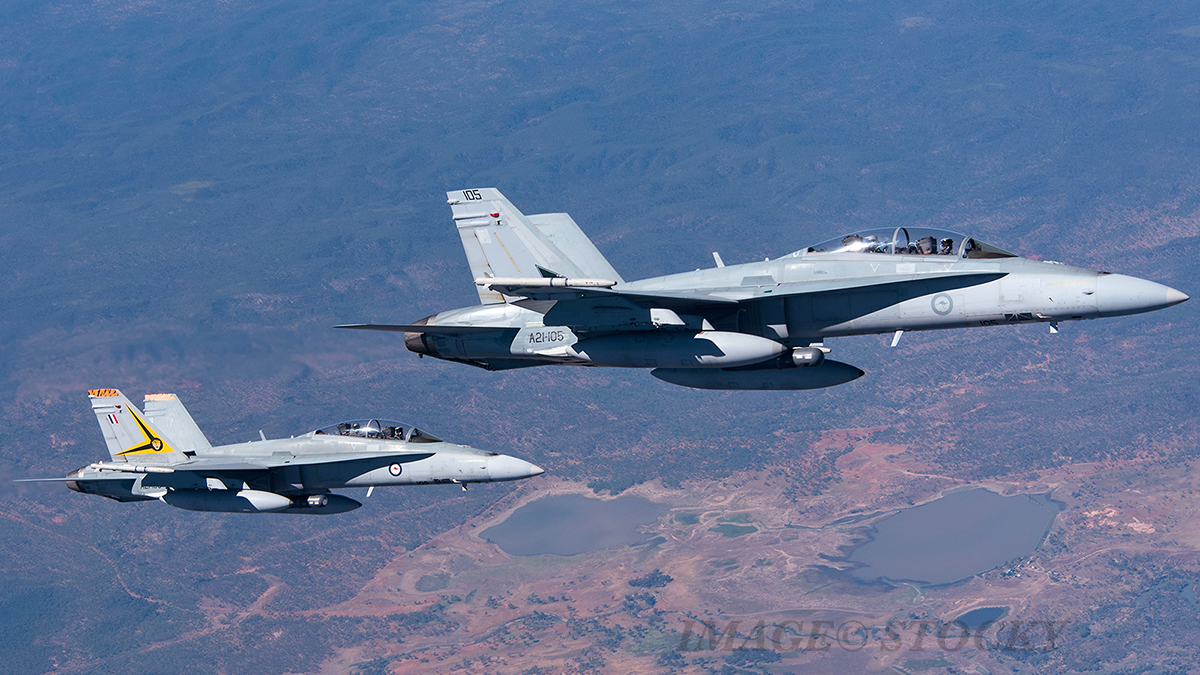 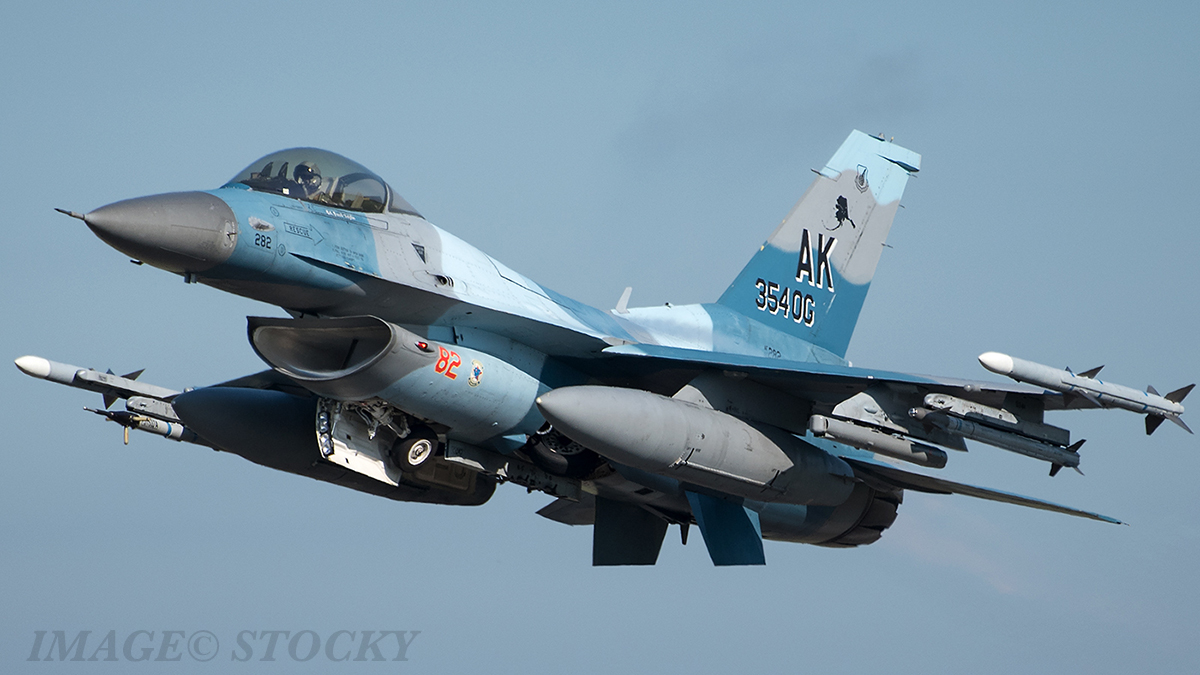 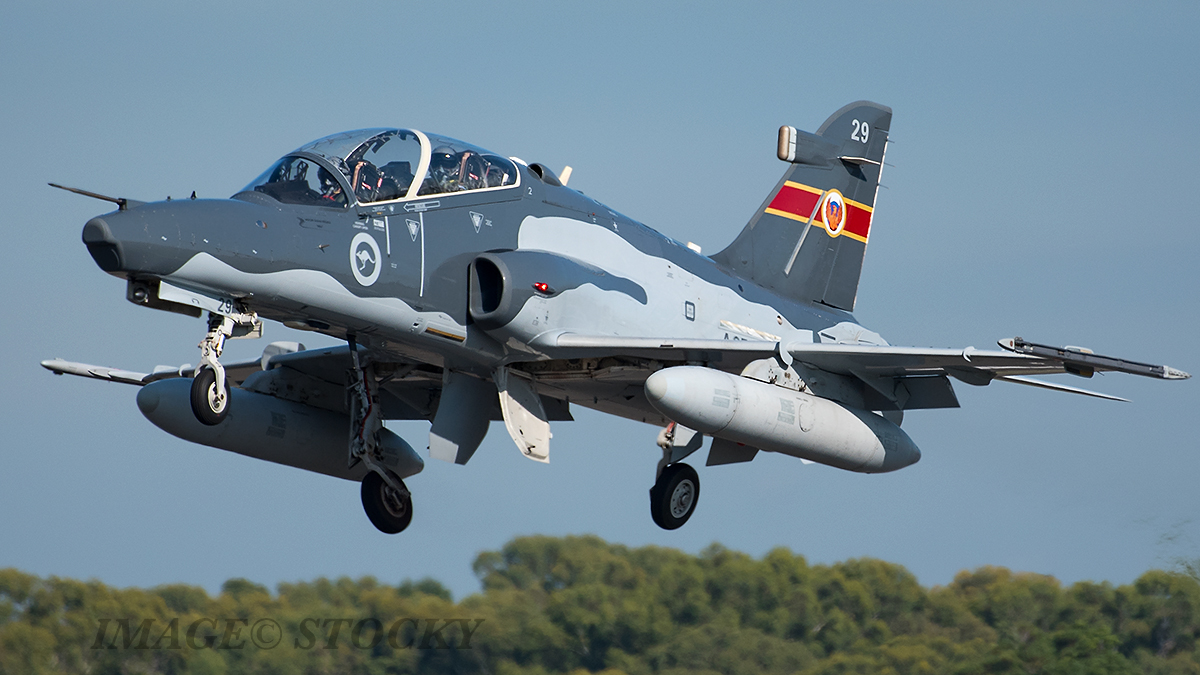 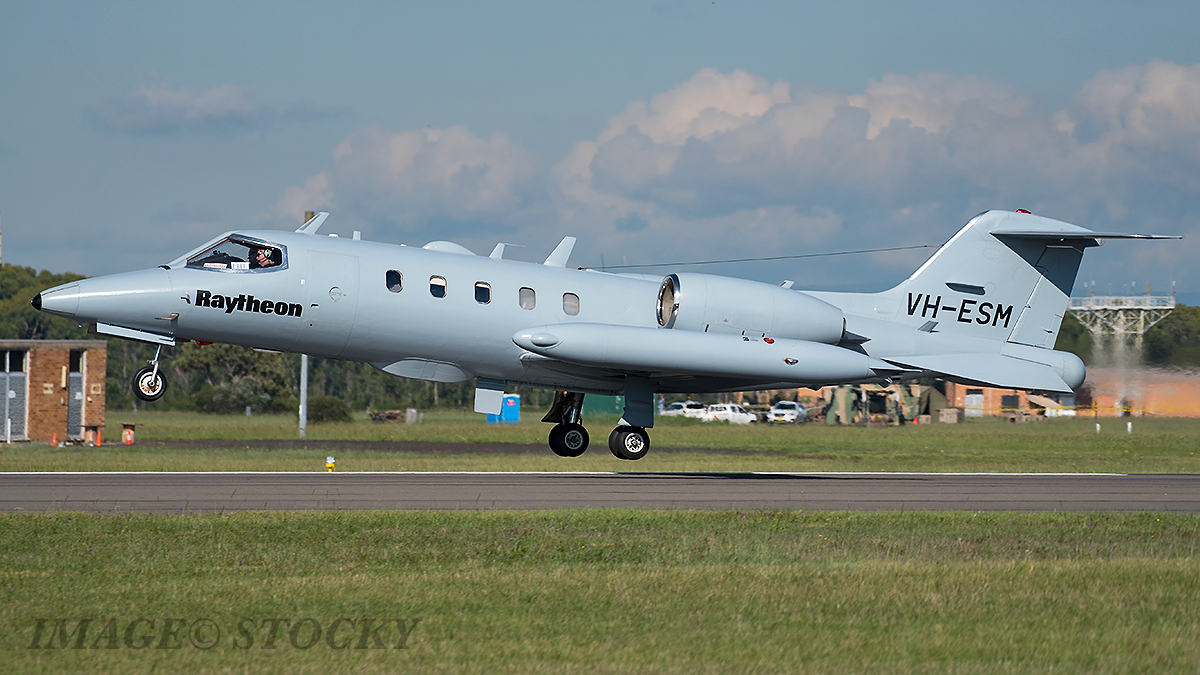 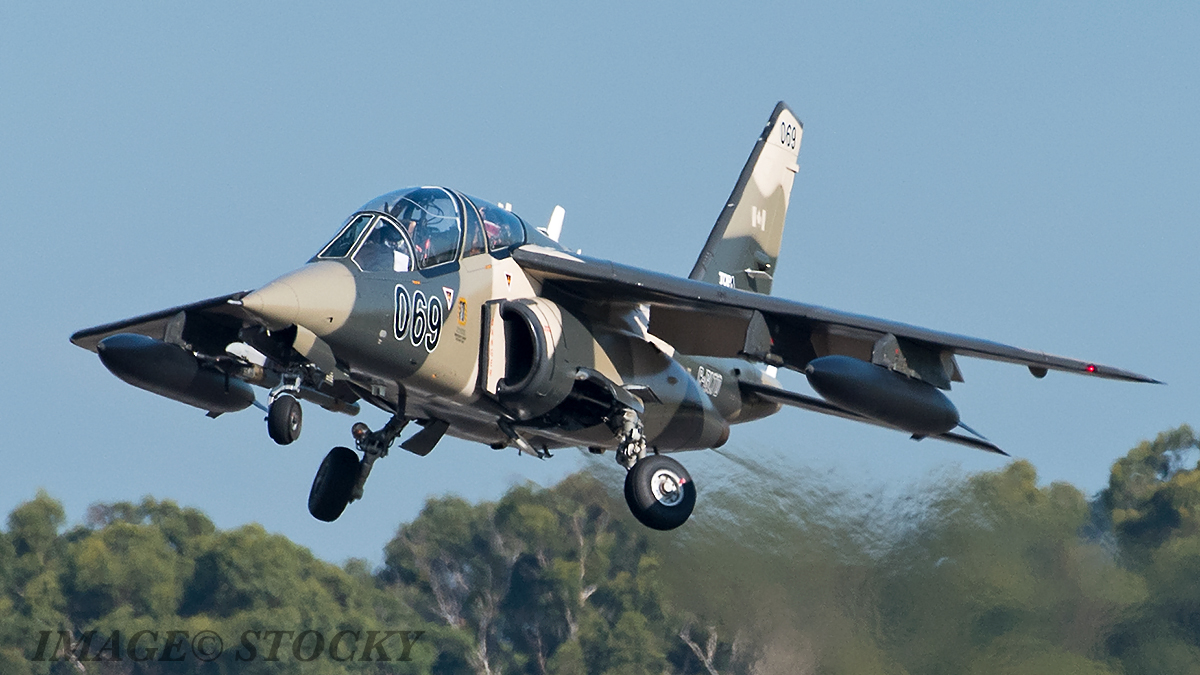 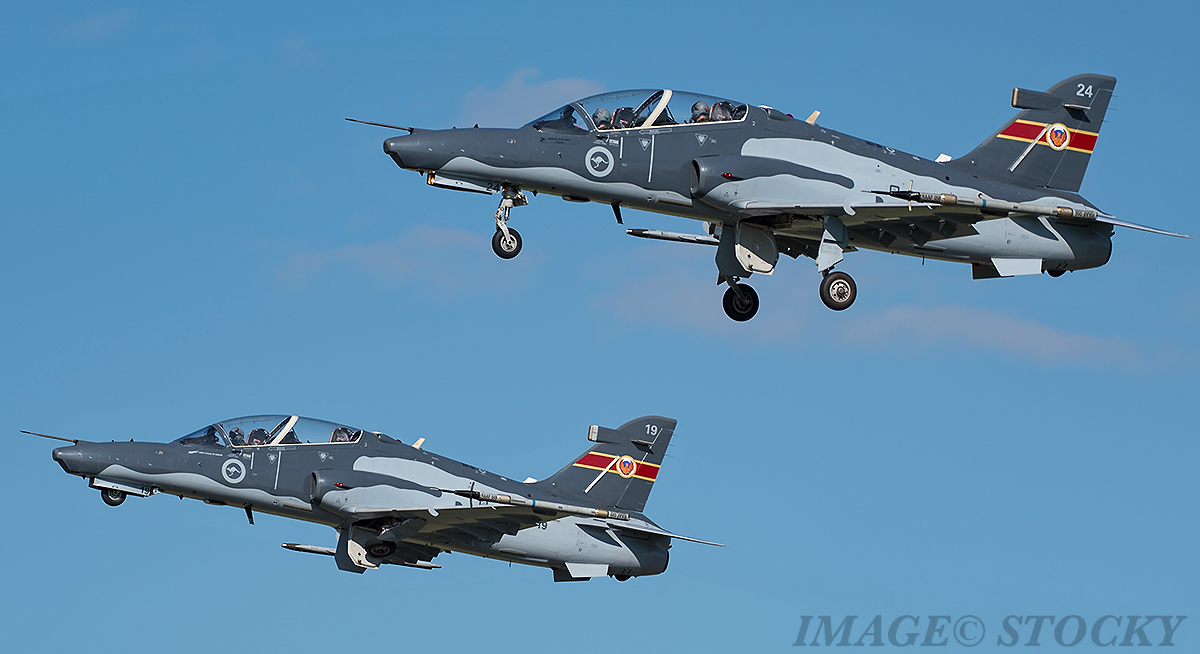 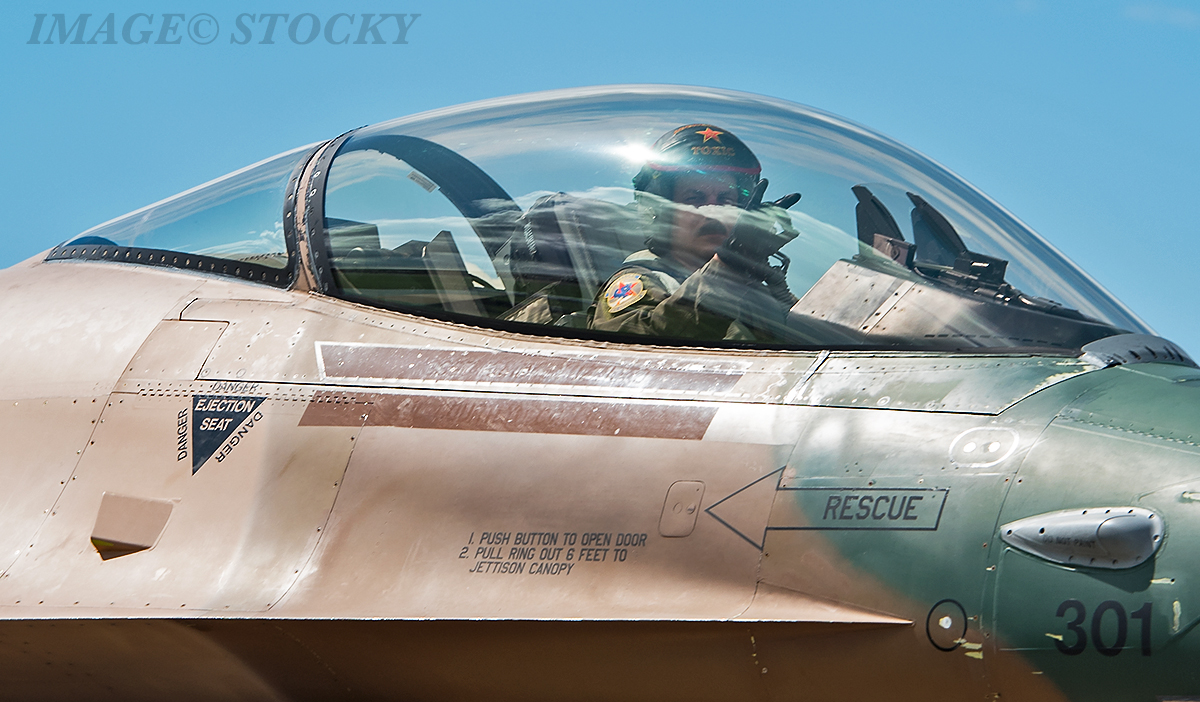 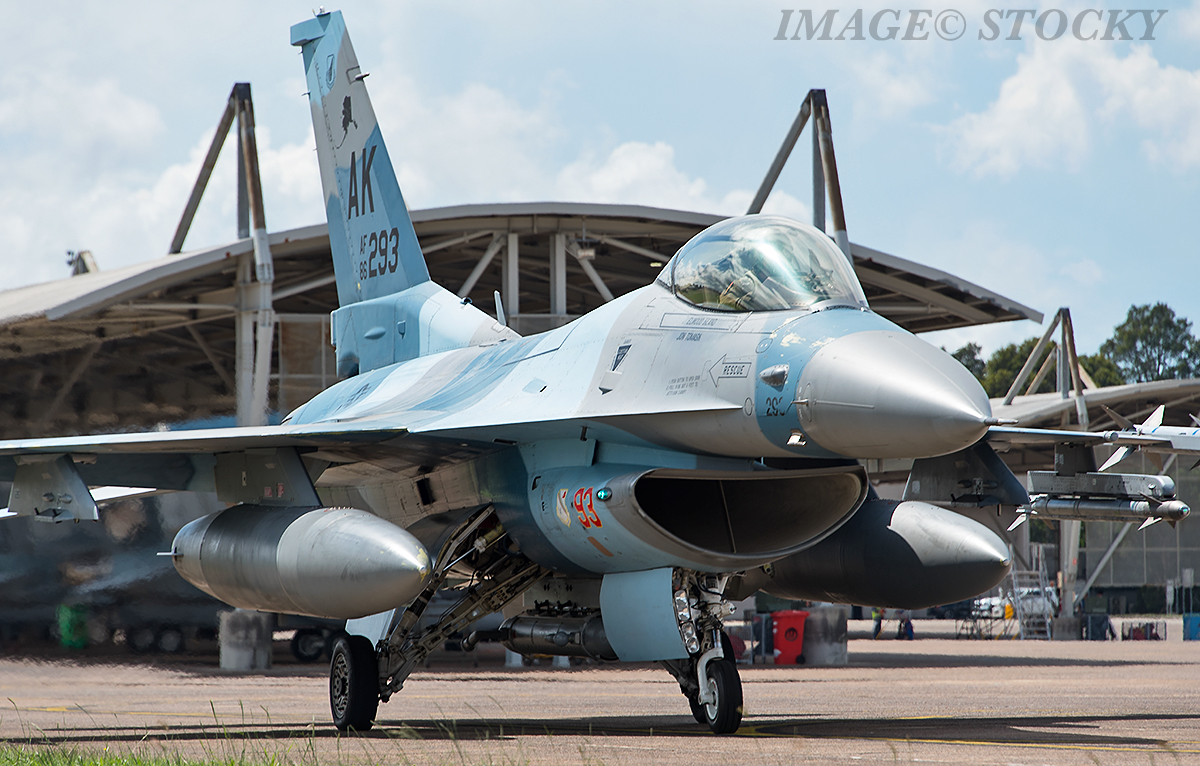 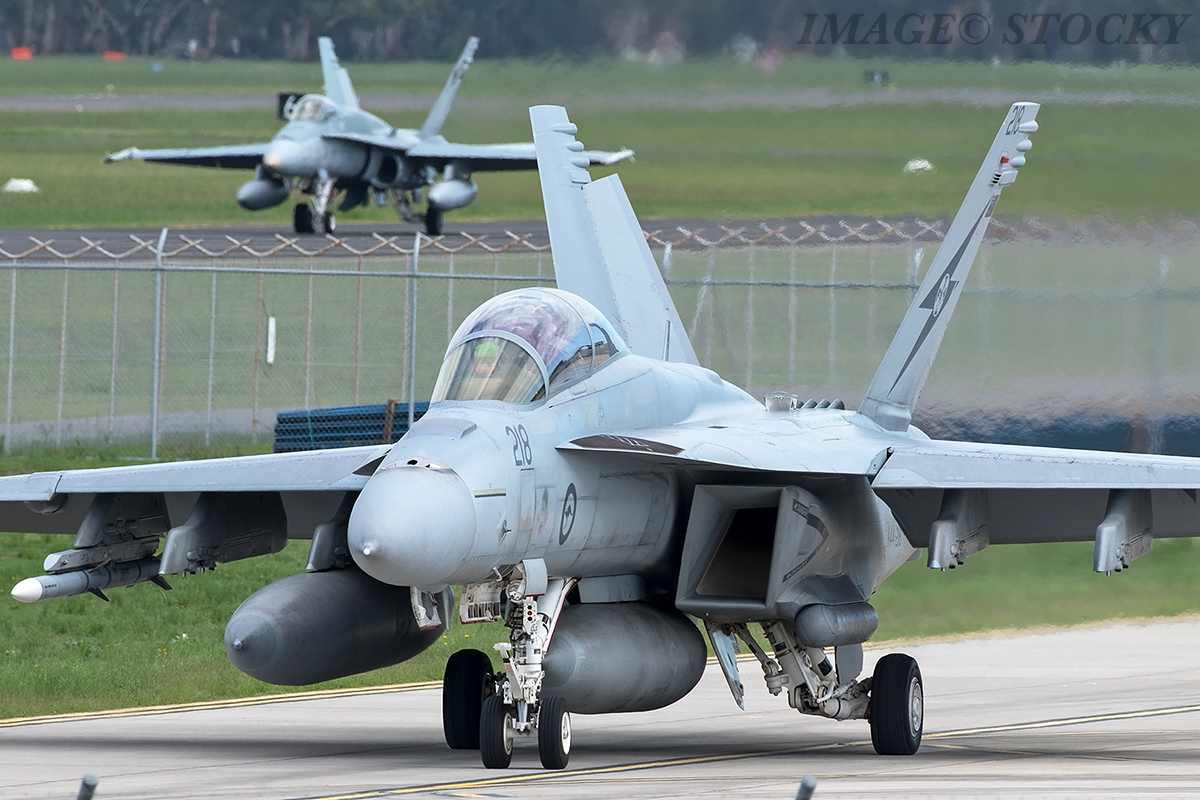 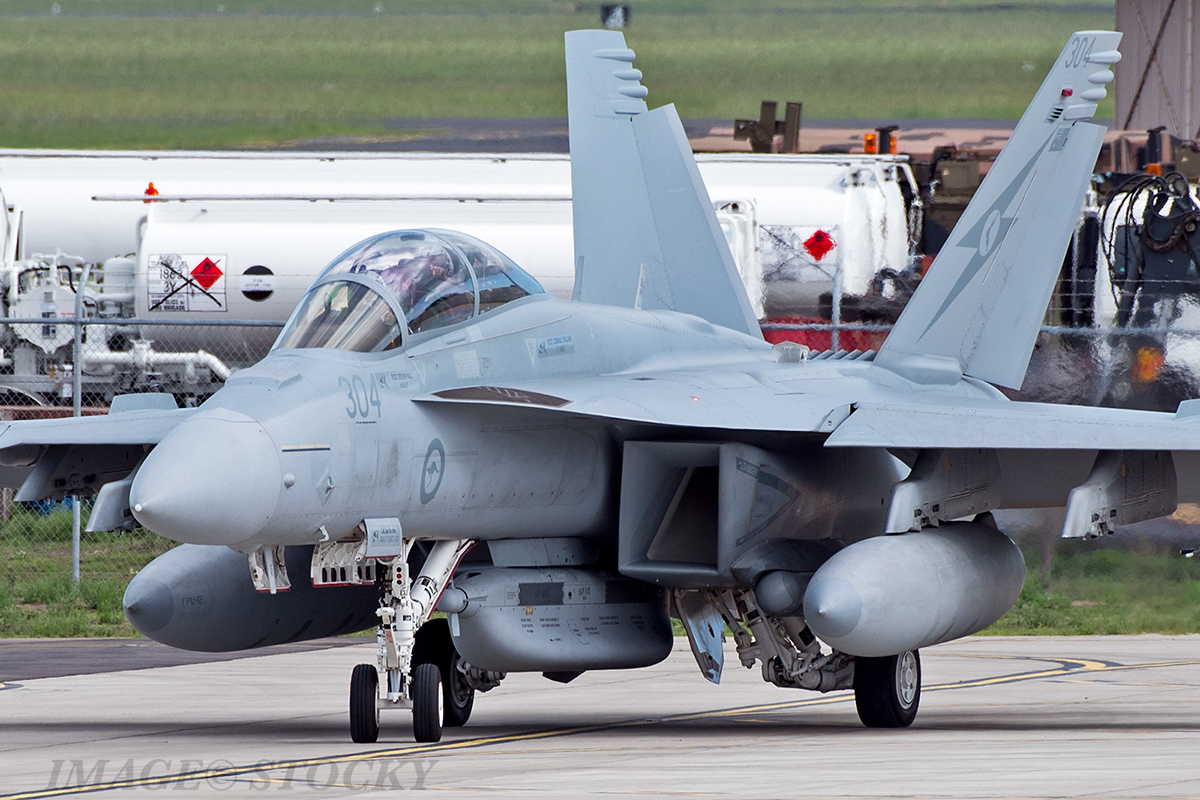 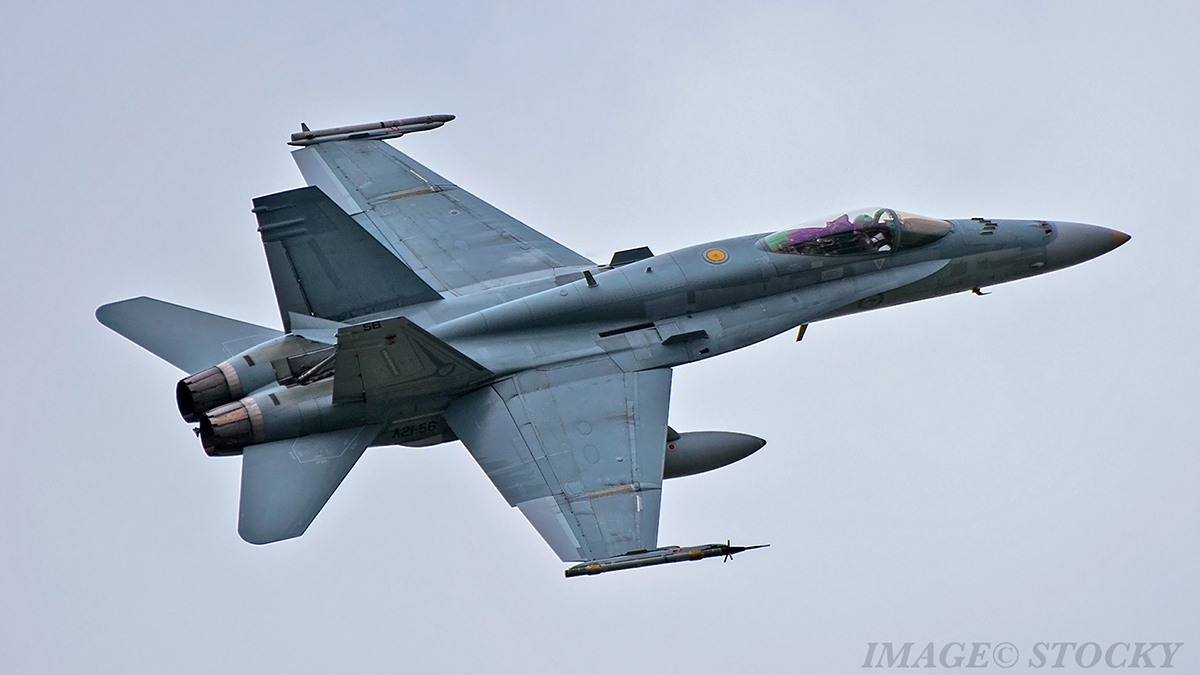 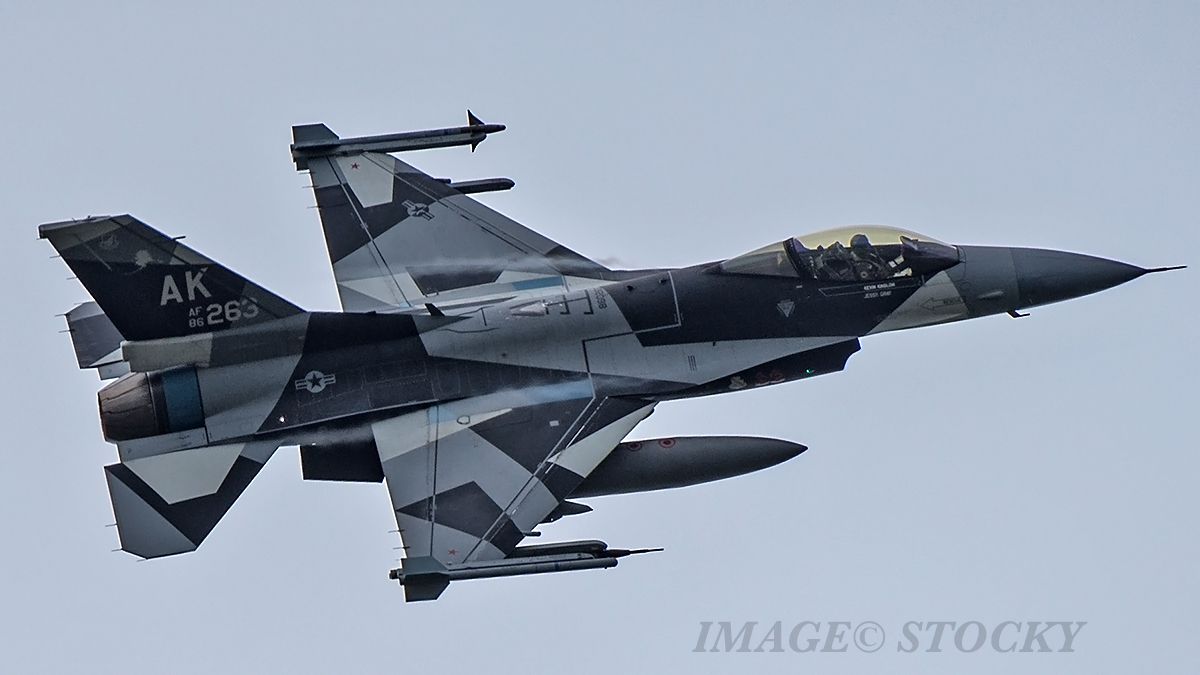 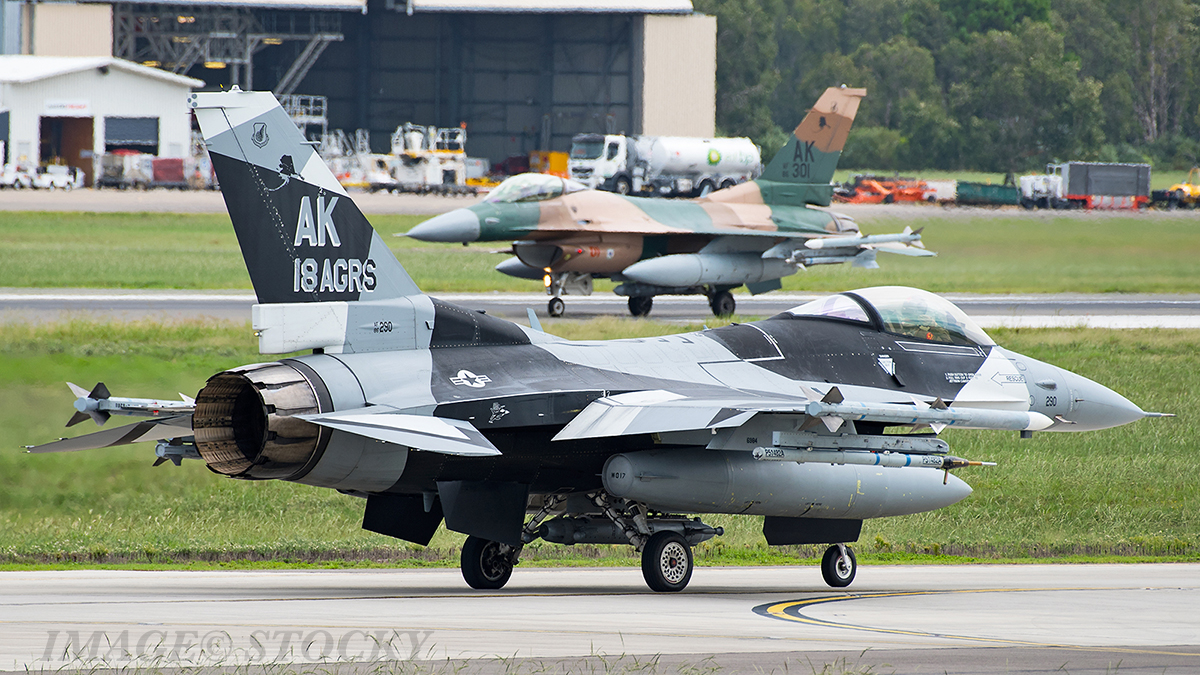