During the last week of Royal Australian Air Force (RAAF) exercise Diamond Storm 22 two United States Air Force (USAF) B-1B Lancers from the 34th Bomb Squadron nicknamed the “Thunderbirds” flew from Andersen Air Force Base, Guam to RAAF Base Darwin on Monday the 20th and Wednesday the 22nd to participate in the exercise.

The two B-1’s affectionately know as the BONE (B-ONE) by their crews are apart of the U.S. Pacific Air Force (PACAF) Bomber Task Force deployment to Guam where four B-1’s and personnel from the 28th Bomb Wing located at Ellsworth Air Force Base, South Dakota have deployed to Guam on June 3rd for an unspecified time period.

Speaking to APD a PACAF spokesperson stated that “While they are in Guam they will train alongside allies, partners, and the U.S. Indo-Pacific Command Joint Force. Improved interoperability showcases our strength and bolsters our collective ability to support a free and open Indo-Pacific.”

With the RAAF and USAF always seeking to develop and strengthen relationships the deployment of the B-1’s to Guam saw the “Thunderbirds” participate in Exercise Diamond Storm, which is apart of the RAAF’s six month Air Warfare Instructors course. The aircraft participation in Exercise Diamond Storm is part of the Enhanced Air Cooperation (EAC) initiative, which commenced in February 2017, to build on a broad range of long-standing air exercises and training activities already undertaken between Australia and the United States.

EAC also provides opportunities to enhance Australia and United States engagement with regional partner air forces through involvement in exercises and training activities, as is the case with Exercise Diamond Storm.

Exercise Diamond Storm is the culmination activity of the third biennial Air Warfare Instructor Course. The trainee air warfare instructors develop their expertise through academic activities and practical exercises that expose the candidates to complex scenarios, focused on broadening and improving their skills.”

B1-B Lancer participation in Exercise Diamond Storm provided additional complexity for our trainees requiring interoperability with a partner nation platform they do not always have exposure to. 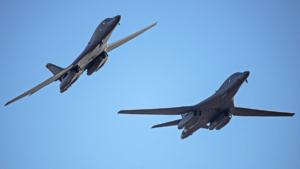 RAAF Wing Commander Andrew Hagstrom Commanding Officer of 88 Squadron said that training with USAF helps the students participating in the AWIC course to gain a better understanding of how to work efficiently with aircraft they don’t regularly get to train with.

“The amount of learning that we get out off dissimilar platforms the capabilities they can bring, and the richness and integration that is required to bring these capabilities together that the students really benefit from.

Even though we might speak English between the United States and Australia it can be a different language sometimes, but broadly our tactics are interchangeable and the way we operate together provides that extra level of richness to the scenario they are training together in.”

As part of the training in Australia, it was a opportune time for the B-1’s to work with the RAAF on the ground at the base in Darwin, this was the first time any USAF Bomber has been able to utilise the newly constructed Bomber Replenishment Apron (BRA) at RAAF Base Darwin, which has been especially built to house four large aircraft, and highlights the United States willingness to invest in defence facilities in and around Australia’s Top End and maybe even showcases the development of deploying bombers to Australia on rotation in years to come.

With the arrival of the aircraft into Darwin the BONE’s conducted a “hot pit” refuelling at the BRA using USAF and RAAF ground crews. “Hot pitting” or refuelling the aircraft while the engines are on and the crew remains in the cockpit, drastically reduces refuelling times so that bombers can more rapidly return to the skies.

RAAF crews at RAAF Base Amberley also trained in “hot pit” refuelling when a B-2A Spirit stealth bomber participated in Diamond Shield back in May 2022.

ADF said that “Air Force has welcomed the visiting US aircraft and personnel and has appreciated the opportunity to work together during the conduct of this activity.” 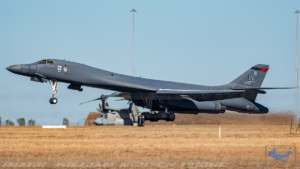 B-1 blasts into the air after refuelling at RAAF Base Darwin with a MRF-D MV-22 from VMM-268 returning to the FRA.- William Nguyen Phuoc. 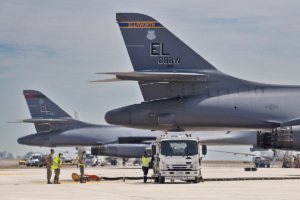