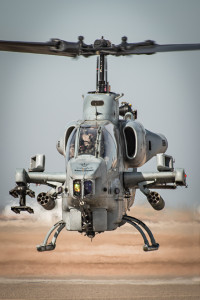 Recommended Reading: NAF El Centro through the lenses of members of Arizona Aviation Photographers (AzAP). Proceeds from the sale of the book are used to directly benefit the sailors stationed at NAF El Centro.

Originally a Marine Corps Air Station, then a Naval Air Station, in 1979 the base was designated Naval Air Facility El Centro. With an average 2.96 inches of rainfall each year and many clear sunny days, NAF El Centro is an ideal base for squadrons to train year-round.

Unlike the fall photocalls, the Spring NAF El Centro Photocall kicks off with a practice show from the Blue Angels. Here, the Navy’s Blue Angels perform their full air show routine in preparation of the upcoming air show season. After the show, photographers are taken out to the main runway to photograph any arrivals and departures for the day. For this photocall, Kris Haugh, the Public Affairs Officer for NAFEC, made a special stop before heading out to the runway. Several USMC AH-1 Cobras/Vipers and UH-1 Hueys/Venoms were preparing for departure on the helicopter ramp. Some dramatic shots of these rotorcraft hovering were able to be captured. The highlight of the helo shoot, and quite possibly the afternoon, was a painted AH-1W Cobra from HMLA-369 “Gunfighters”. This Cobra was painted with an image of a Cobra snake on both sides. This artwork by Shayne Meder and Roxane Bond is some of the most impressive that I have seen on a helo and a perfect match for the Cobra’s intimidating profile.

After the helos departed, it was time for the classic NAF El Centro runway shoot. The difference this time was that the photographers had to stay further back off the runway. With a base that has a lot of training activity going on, in an area that can be known for strong wind gusts, this new safety measure is a wise one. The distance is still closer than allowed at many other bases and allows for better composition when framing shots.

The bulk of the runway action consisted of T-45’s, with a few helos, and an EA-18G Growler in the mix. The weather was nice most of the afternoon and there were some spectacular cloud formations during parts of the day. One of the benefits to these photocalls, that is not so obvious, is the social benefit. Aviation photographers from around the world get to interact, share ideas, and discuss aviation photography-related topics.

Overall, the Spring 2015 NAF El Centro Photocall was a successful one. In addition to the runway traffic, we were treated to a performance from the Blue Angels and some USMC rotorcraft. The event was well-organized and photographers were treated with multiple opportunities for a thrilling photograph.