When an aviation enthusiast is asked about Edwards Air Force Base, a common association with Chuck Yeager’s flight that broke the sound barrier and NASA’s Space Shuttle comes to mind. These are very important projects that are associated with Edwards Air Force Base, but the base’s importance is not limited to those projects. Edwards AFB is one of the most significant air bases in the United States. Since World War II, Edwards AFB has been involved in the development and testing of every major aircraft we know about, including some aircraft we do not know much about. Currently, Edwards is involved in testing the United States’ latest aircraft, the Lockheed Martin F-35. 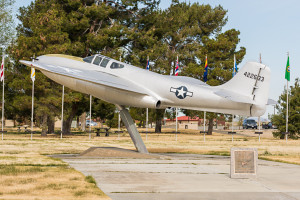 The jet that started it all. A Bell XP-59A Airacomet.

What began as a remote bombing range in the 1930’s, emerged as an important testing center during World War II. Located approximately 100 miles north of Los Angeles, California, Edwards AFB is located in Antelope Valley, which is part of the Mojave Desert. Edwards AFB is the United States Air Force’s second largest base. With over 481 square miles including several dry lake beds and mild year-round weather, Edwards AFB is an ideal location for developing and testing aircraft. The dry lake beds, which are smooth and flat, contain runways that are ideal for alternate and emergency landings. Home of the Air Force Test Center, Air Force Materiel Command, USAF Test Pilot School and NASA’s Dryden Research Center, Edwards’ role in U.S. military aviation cannot be understated.

Initially, Edwards Air Force Base, then Muroc Army Air Field, was used as a training base for bombers during WWII. Beginning with the United States’ first jet-powered aircraft, the Bell XP-59A Airacomet, through supersonic aircraft 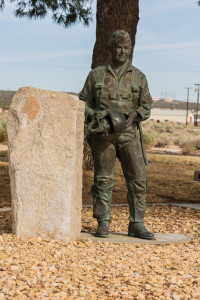 such as the F-100 Super Sabre, F-104 Starfighter, and the F-106 Delta Dart, to aircraft many have never heard of such as the XB-70 Valkyrie or the Northrop YB-49, to the present day F-35, Edwards AFB has been part of more milestones in aviation history than any other base in the U.S., and quite possibly, the entire world. One of the more significant milestones was accomplished by Chuck Yeager breaking the sound barrier in a rocket-powered Bell X-1 on October 14, 1947.

Retired Brigadier General Charles “Chuck” Yeager is a legendary figure in Edwards AFB history. He was also featured prominently in the book, and later a film, entitled “The Right Stuff”. In addition to being the first pilot to break the

sound barrier, Chuck Yeager broke many speed and altitude records and was the first American pilot to fly a MiG-15. Chuck Yeager’s presence continues to be felt throughout Edwards AFB, from the infamous “Yeager Pit” (This pit was to load the Bell X-1 aircraft to the belly of the B-29 mothership) to the 500 lb. bronze statue depicting Chuck Yeager which is located on Yeager Boulevard on the base.

Today, Edwards AFB continues to be active with aviation testing. Edwards AFB’s proximity to Naval Air Weapons Station China Lake, Groom Lake (Area 51), USAF Plant 42, Nellis AFB and a variety of ranges, continues to help make Edwards an ideal location for the development and testing of aircraft. Perhaps the most significant advantage Edwards AFB has for testing aircraft is the amount of airspace the base controls. Known as the R-2508 Complex, this airspace, and associated land, is comprised of the airspace and land designated for use to Edwards AFB, National Training Center, Fort Irwin and Naval Air Weapons Station China Lake. R-2508 is 20,000 square miles of Special Use Airspace (SUA) which includes: bombing ranges, supersonic corridors, low altitude high speed maneuver areas, radar intercept areas, and refueling areas. While all of this airspace is rarely used at one time, the potential use of it is there if needed.

The types of aircraft that can be currently seen flying at Edwards AFB include all the aircraft the USAF is currently utilizing. This includes manned and unmanned aircraft. Many different variations of the same aircraft can also be seen. For example, for the F-35 program, all variants (A,B and C) of the F-35 are being tested. Unique aircraft such as the Boeing NKC-135R Stratotanker and the C-135C “Speckled Trout” can also be seen flying, as well as, unmanned aircraft such as the Northrop Grumman RQ-4 Global Hawk. 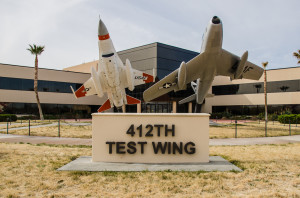 The entrance guards for the 412th Test Wing

When driving around Edwards AFB, there are plenty of mementos, in the form of static aircraft, to remind us of Edwards AFB’s illustrious past. Static displays such as the General Dynamics F-16XL, one of the original C-135C “Speckled Trout” aircraft (the 2nd one used), a Bell XP-59A Airacomet, a NASA Boeing NB-52B mothership (Balls 8), a Ling-Temco-Vought YA-7F “Strikefighter” and a McDonnell Douglas YC-15 are located throughout the base. Many of these aircraft were test aircraft that never had a normal production run. For example, at the Edwards AFB Museum, located on-base, a Fairchild-Republic YA-10B is on display. The YA-10B is a rare two-seat version of the A-10 Thunderbolt II (Warthog).

Aviation Photography of the West was fortunate enough to spend a day at Edwards AFB in early April 2014. For aviation photographers and enthusiasts, Edwards AFB’s significance in aviation history made the experience feel like a child would feel on their first visit to Toys ‘R Us. In addition to the numerous static displays throughout the base, the ramp was busy with activity. Several variations of the F-35 are being tested regularly. Every time an F-35 launched, several F-16’s would launch shortly before or after. T-38’s were also launched throughout the day, along with a C-17 and a NKC-135R. All around us was history in the past, present and future form.

One can argue which airbase has been more important throughout history. There is no doubt of Edwards AFB’s significance when it comes to the development and testing of aircraft since WWII. Edward AFB continues the same mission today as it has in the past…testing and development for progress. Throughout turbojet revolution, the supersonic revolution, the space revolution, the technology revolution and, currently, the stealth revolution, or, whether it is testing new aircraft, or refining and improving the capabilities of existing aircraft, the Air Force Test center located at Edwards AFB continues to lead the way. Chuck Yeager once stated: “we didn’t know if we could break the sound barrier, but it was our duty to try”. The test pilots of Edwards AFB continue to move forward with the same philosophy.

Aviation Photography of the West would like to give special thanks to John P. Haire, Chief of Public Affairs Operations at Edwards for his wonderful hospitality, and for providing us with a plethora of information throughout the day about the history of Edwards AFB.