The day started out at the Century Circle where, as the name implies, they have a group of Century series fighters displayed in a circle. The F-100, F-101, F-102, F-104, F-105 and F-106 fighters are featured.  Also on display is one of two McDonnell Douglas YC-15s which are predecessors to the current C-17.
Once inside the base, we headed towards the Lockheed NF-104A outside the headquarters of the US Air Force Test Pilot school. Only 3 were ever made and they featured a rocket engine and a reaction control system for controllability at extremely high altitudes.

Another interesting piece of history was a Bell P-59B Airacomet – this was mounted on a pylon in front of the base operations building. The Airacomet was the first American jet fighter, while not a spectacular performer, it did serve well in a training role and provided data for subsequent development of higher performance jets. The NASA F-15 HIDEC was parked behind one of the hangars. This was used to investigate and demonstrate methods of obtaining optimum aircraft performance using Highly Integrated Digital Electronic Control.

No visit to Edwards could be considered complete without a visit to Sound Barrier Park and the bronze Chuck Yeager statue. The statue and the stone monument commemorate the October 14, 1947 breaking of the sound barrier.

A tour around the ramp showed plenty of ongoing activity with various aircraft being worked on, such as the B-1, B-52, and an RQ-4 Global Hawk. 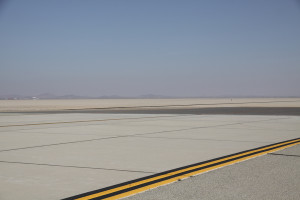 We got to drive up to the Rogers Dry Lake Bed which was used by the Space Shuttle, the Bell X-1 and many other landmark projects over the years. It has 8 official runways with the longest being 7 1/2 miles and has been declared a National Historic Landmark.

Edwards AFB has been involved in the testing of every major Air Force weapons system for the last 60 years. One of the major current test programs at 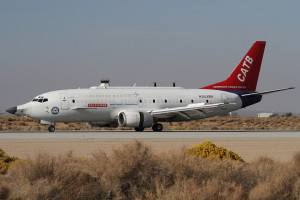 The Lockheed Martin CATBird (Cooperative Avionics Test Bed) with the nose, avionics, and cockpit of an F-35

Edwards involves the F-35 Joint Strike Fighter, and  numerous examples were seen flying. The Lockheed Martin CATBird aircraft was seen participating in some test activity as well. The name is a partial acronym for Cooperative Avionics Test Bed. This is a specially modified Boeing 737 with an F-35 nose and a pair of canards aft of the front door. Inside the aircraft there is an F-35 cockpit as well as an array of test equipment.

Some hours were spent observing flight ops. Various F-35 were flown and there was much test pilot school activity as well, involving F-16s and T-38s. A B-2 did multiple launches and recoveries most likely for pilot currency training.

A visit to the X-1 pit at South Base followed; this is a pit built into the ramp where the Bell X-1 was loaded underneath a B-29 prior to its record breaking flight.

The very informative day ended with a visit to the Edwards AFB Flight Test Museum where many rare aircraft were out on display. A YF-22 Raptor was on display inside the museum, this was a finalist in the USAF’s Advanced Tactical Fighter competition. The YF-22 won the competition and evolved into the production F-22A. Outside aircraft included an SR-71, a Boeing B-52D, a NASA F-16XL, the only two seat A-10 and many other notable test aircraft. With a wealth of historical artifacts and test aircraft, you could spend the better part of a day there.

Many thanks to John P Haire, Chief of Public Affairs for his very interesting and detailed tour and the wealth of information provided.