The airport is one of the hidden gems of aviation in the Midwest and perhaps all of the United States.  Located in the northern suburbs of Minneapolis, Minnesota KANE is a reliever airport for Minneapolis/St. Paul International airport.  The airport has two runways 9/27 and 18/36 and a non-federal aircraft control tower.  The airport supports more than 68,000 takeoffs and landings annually.  There are 407 aircraft based at the airport.  There is a tremendous variety of aircraft on the field; many Cessna’s and Pipers, but also a plethora of warbirds also.  Since Minnesota is “The land of 10,000 lakes” there are seaplanes; including a Grumman Albatross HU-16B and a Piaggio P-136.

Saturday morning brought some partly cloudy skies with a forecast of rain in the afternoon, but that did not dampen the enthusiasm of the volunteers and guests attending the 2016 Discover Aviation Days.  Soon the smells of pancakes, sausage and av-gas filled the air as the show ramp began to fill. 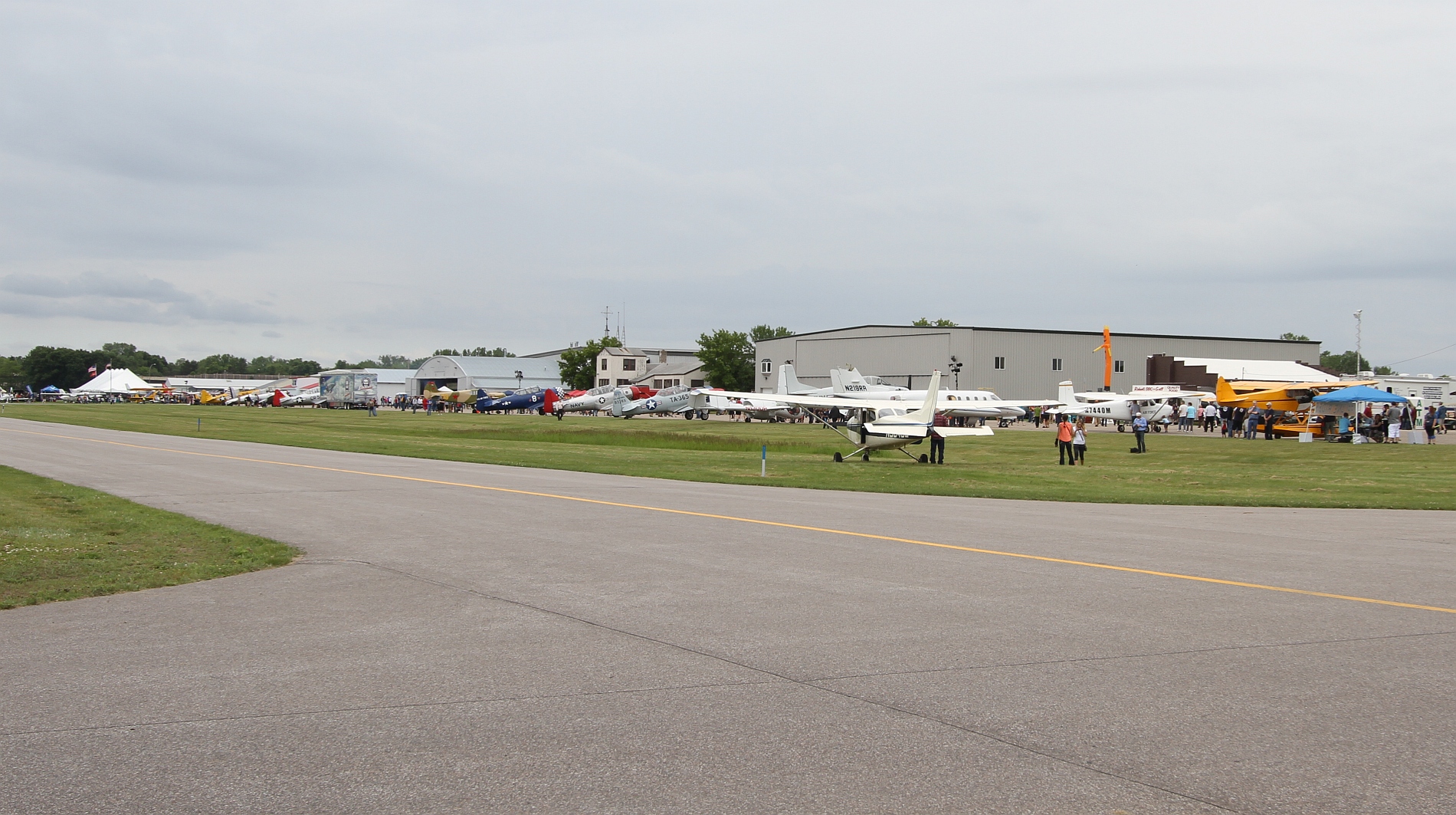 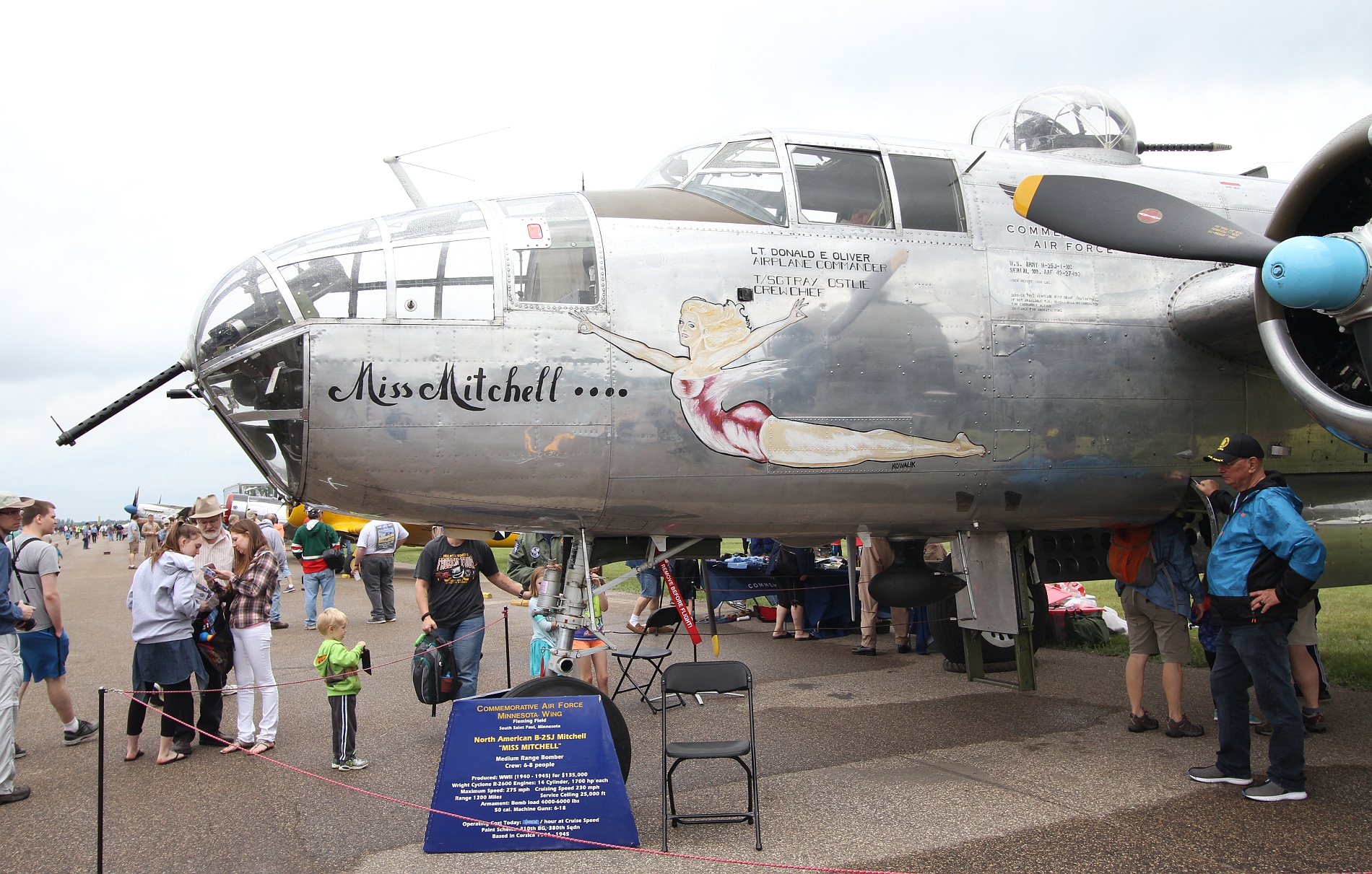 The skies were filled with the sound of round engines as T-6 Thunder put up a four ship flight for a fly over at the flag raising.  Three of the T-6’s left from Anoka to be joined by the fourth ship from Flying Cloud Airport.  The four ship formation was soon in tight formation and on target for the flag raising at 0935! 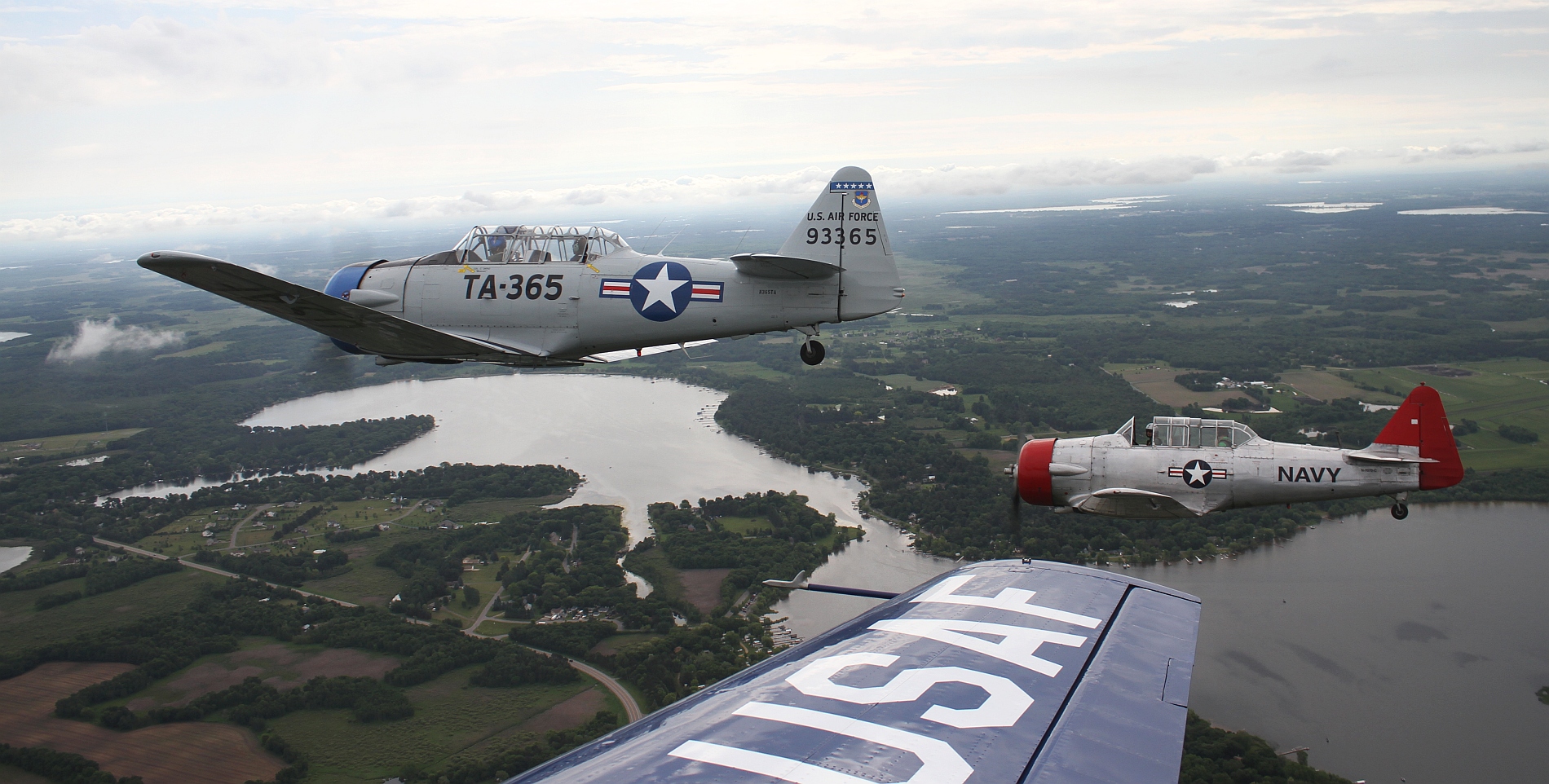 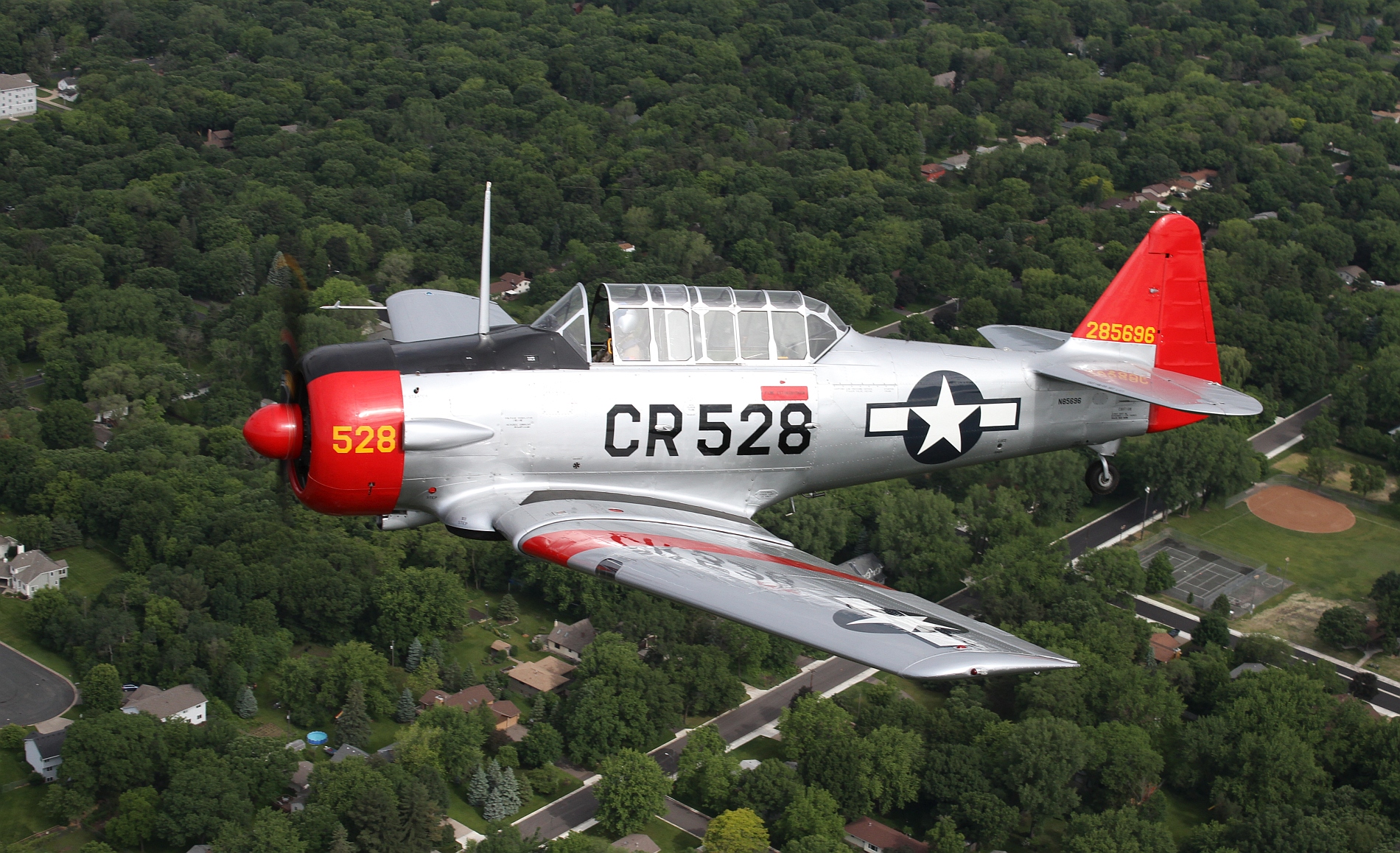 The crowds began to fill the south ramp with lots of families out to enjoy the first airshow of the summer.  Unfortunately clouds filled the skies and soon a light drizzle began to fall.  Despite the rain the crowds were out looking at the aircraft.

Unique aircraft filled the ramp.  Among them this rare and unique ducted fan Edgley EA-7 Optica 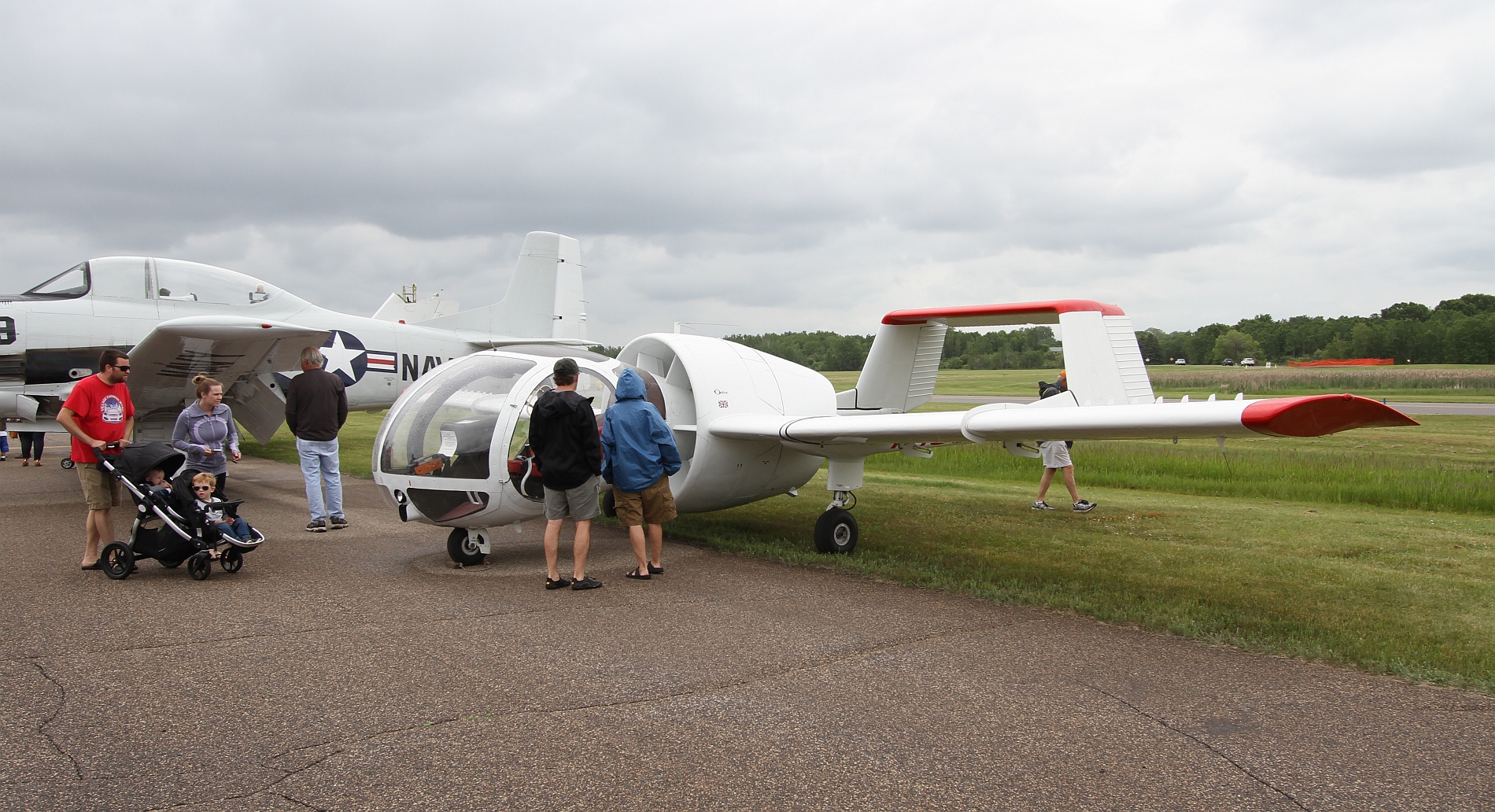 Wings of The North Museum flew in the immaculate “Sierra Sue II” P-51 Mustang and the crowds enveloped here on the ground. 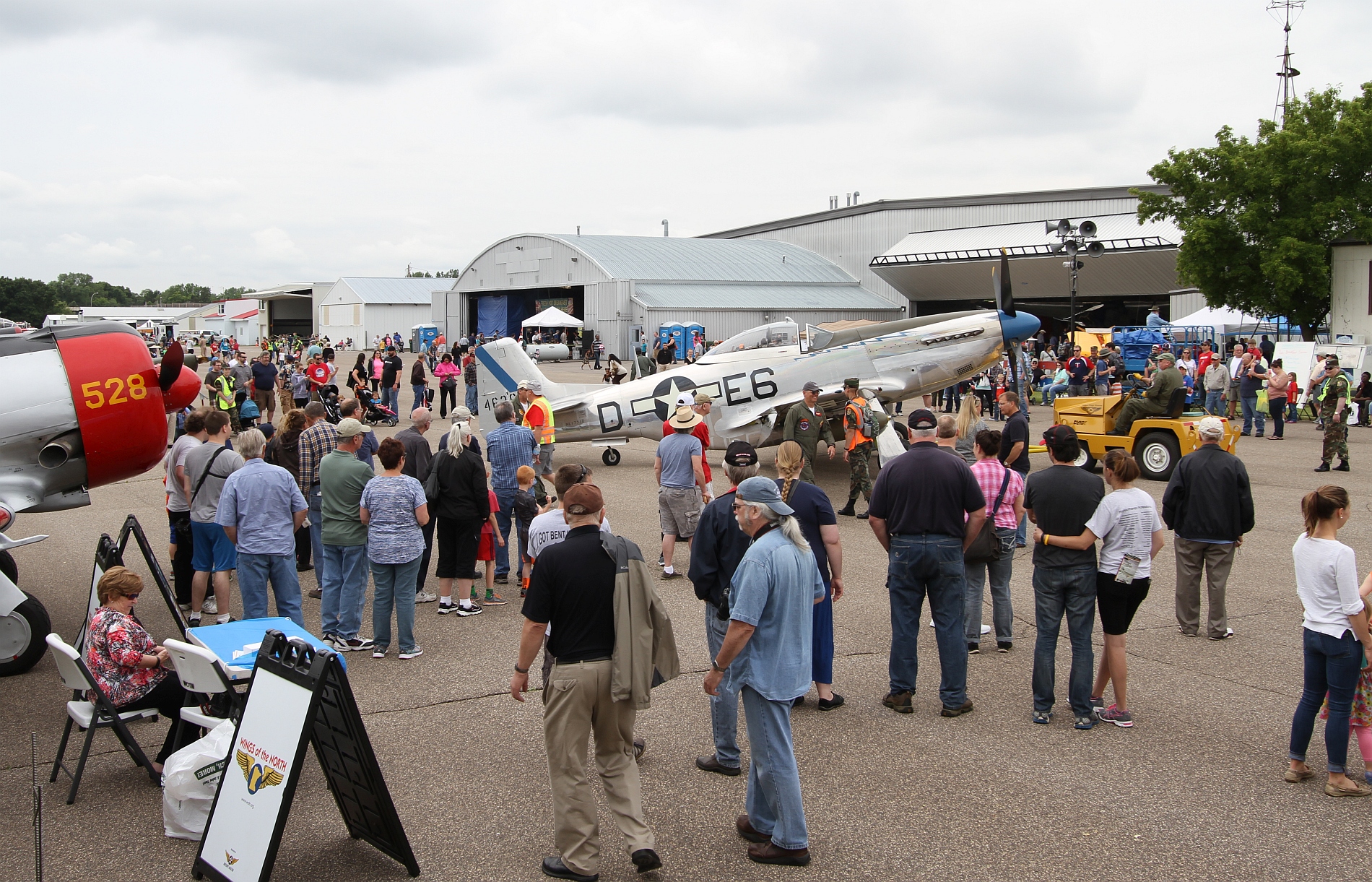 TP Aero had the hanger doors open displaying the Grumman Albatross and later in day flew their Howard 500. 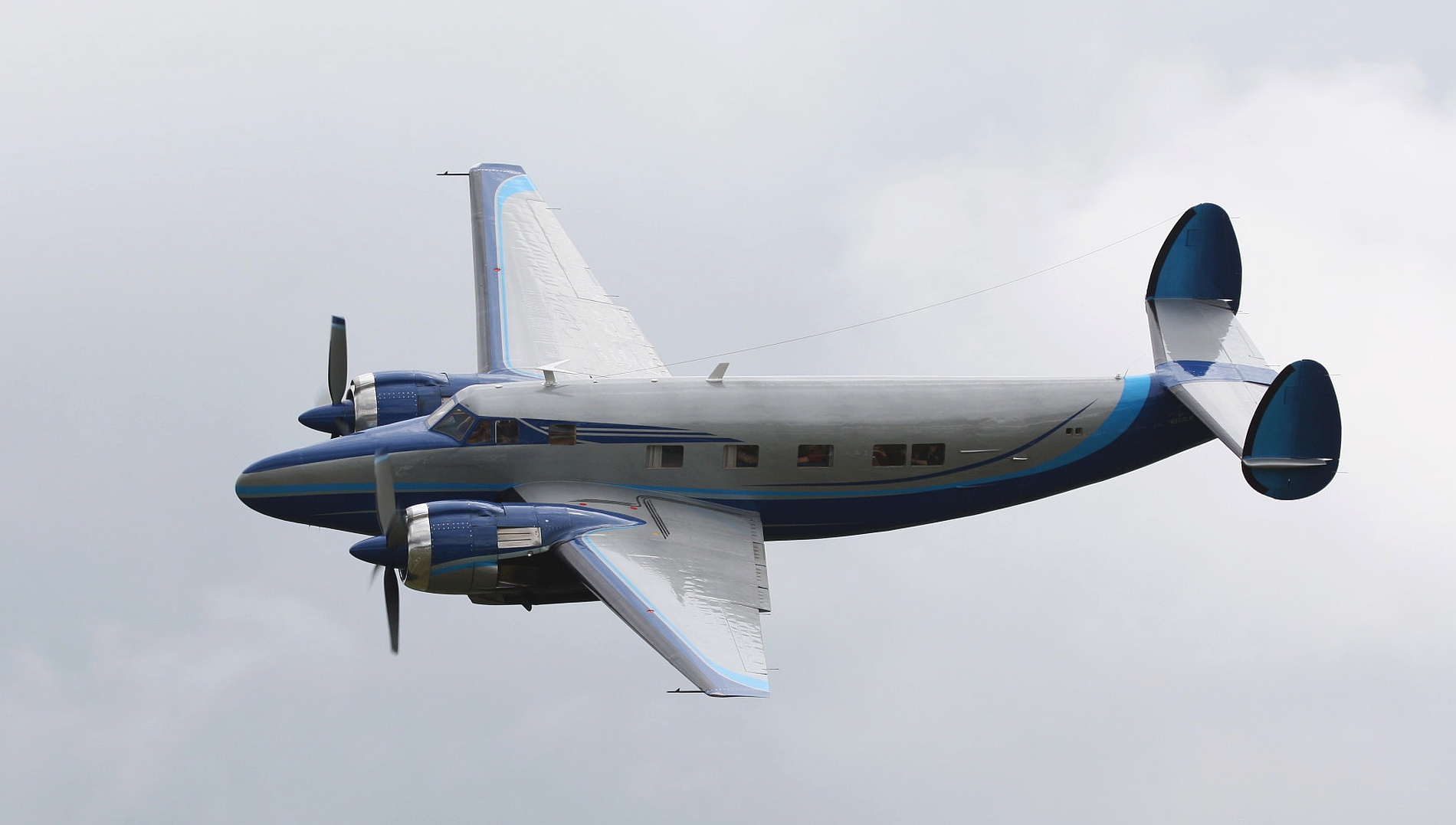 One of the crowd favorites was the Hawker Sea Fury “Sawbones”. This 1949 FB-11 model has raced at the Reno Air Races placing as high as 4th in the unlimited class.  The stock appearing Sea Fury mixes up with the highly modified unlimited class racers hitting lap speeds of 415 mph!  The Sawbones team had their support trailer parked next to the plane.  If you look closely at the trailer you seen a small graphic of the space shuttle orbiting high above Sawbones.  This graphic pays homage to the Sawbones race pilot Colonel Curt Brown. 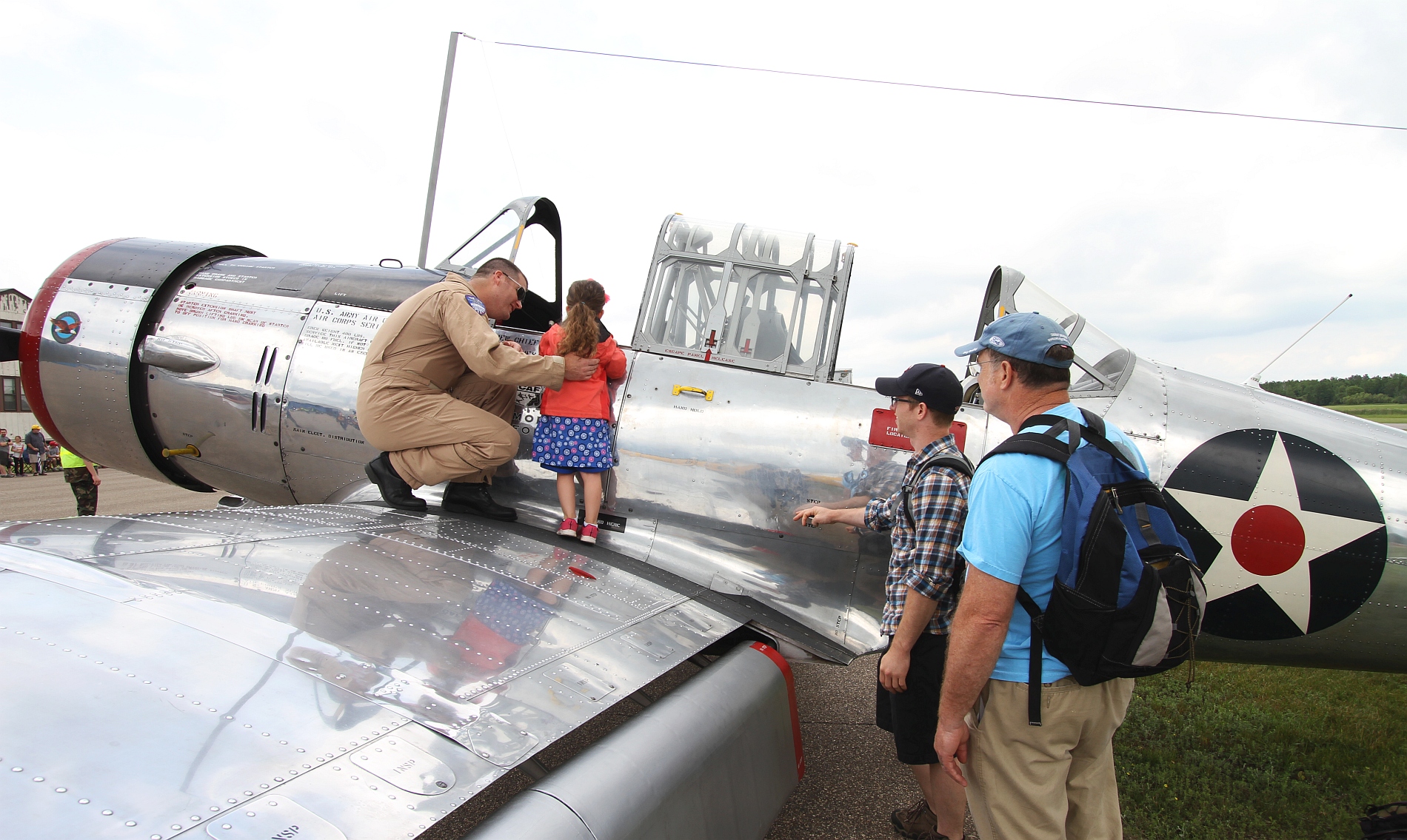 The variety of aircraft at the show was fairly dramatic.  Sitting next to one-another were a T-28 trainer and a Lear 25D.  The Learjet was open for show visitors to peer in and see what the first generation of business jet travel was like.

The show ramp only displayed a portion of what is on the field at Anoka County airport.  There are two museums on the field; Greg Herrick’s Golden Wings Flying Museum and the American Wings Air Museum.  Golden Wings has the largest collection of tri-motor aircraft in the United States.  Their collection is amazing!  The American Wings Air Museum has a collection of Korean and Vietnam War era aircraft.  It is dedicated to the restoration and preservation of American military aircraft, focusing on the Mohawk OV-1. 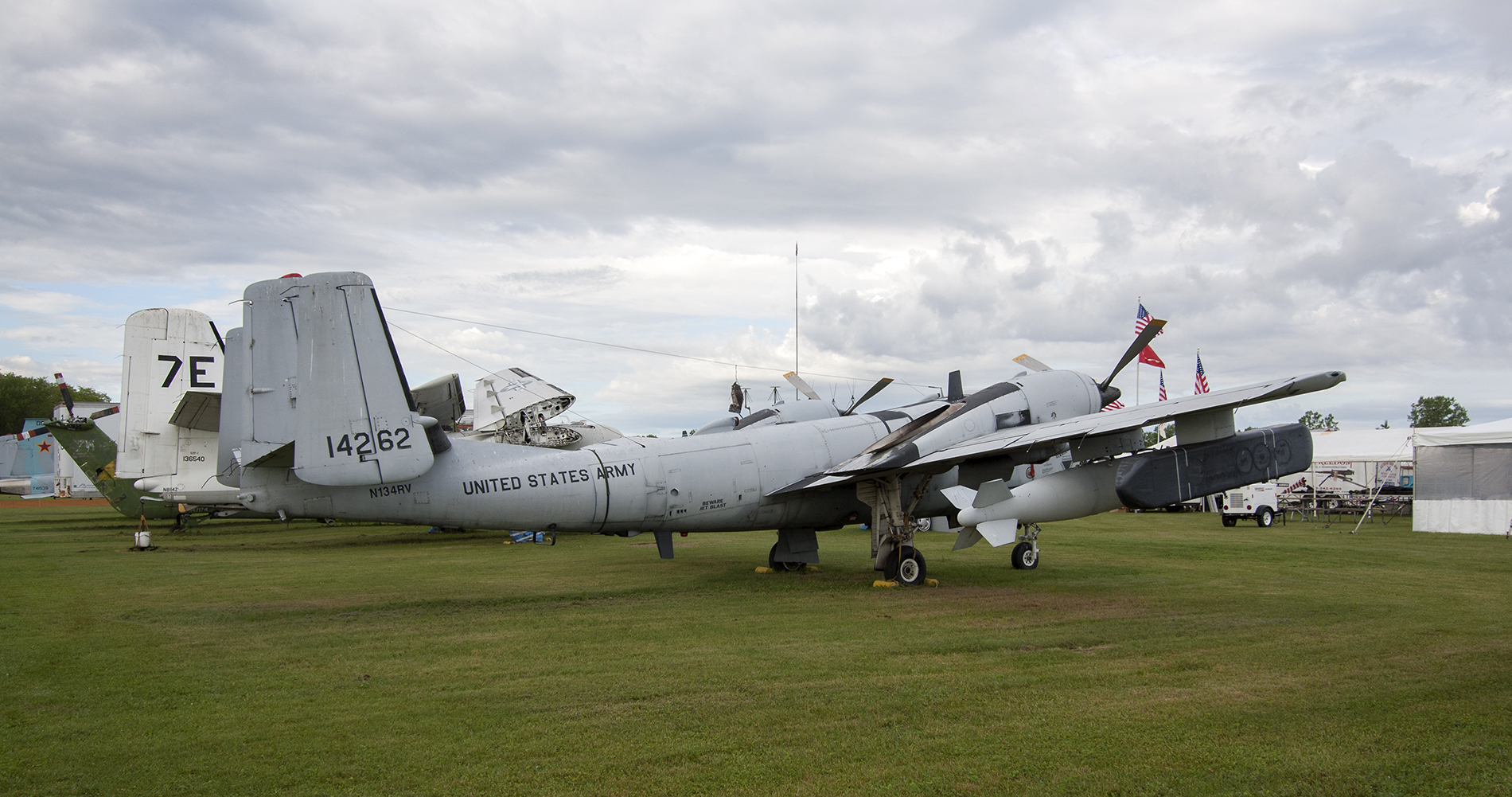 Sunday’s weather was sunny but windy and the family’s and crowds were out in full force.  A few new visitors showed up.  Among them this cool 1962 Huey; 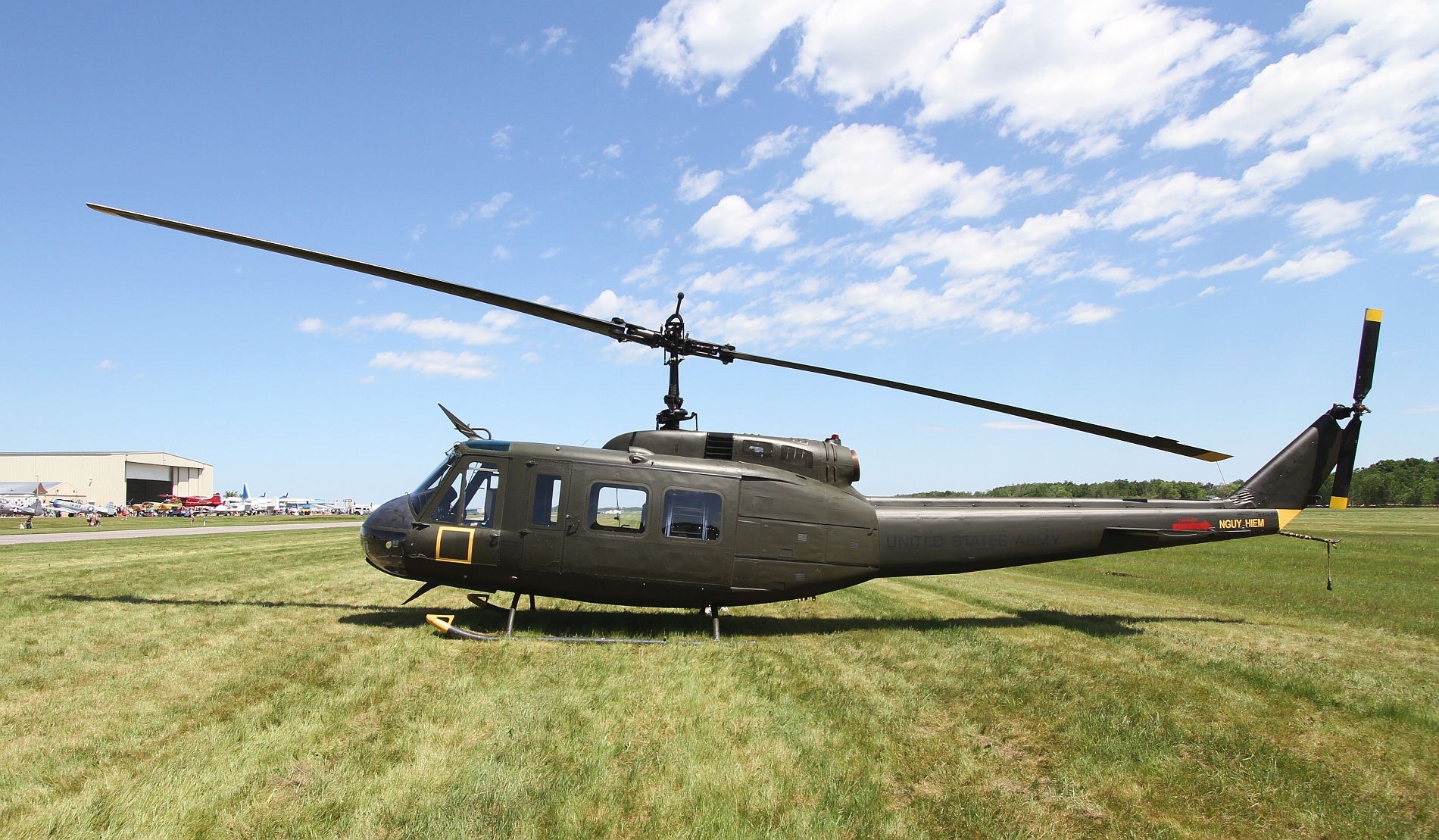 One of the oldest flying Ford Tri-Motors was rolled out to the show ramp. 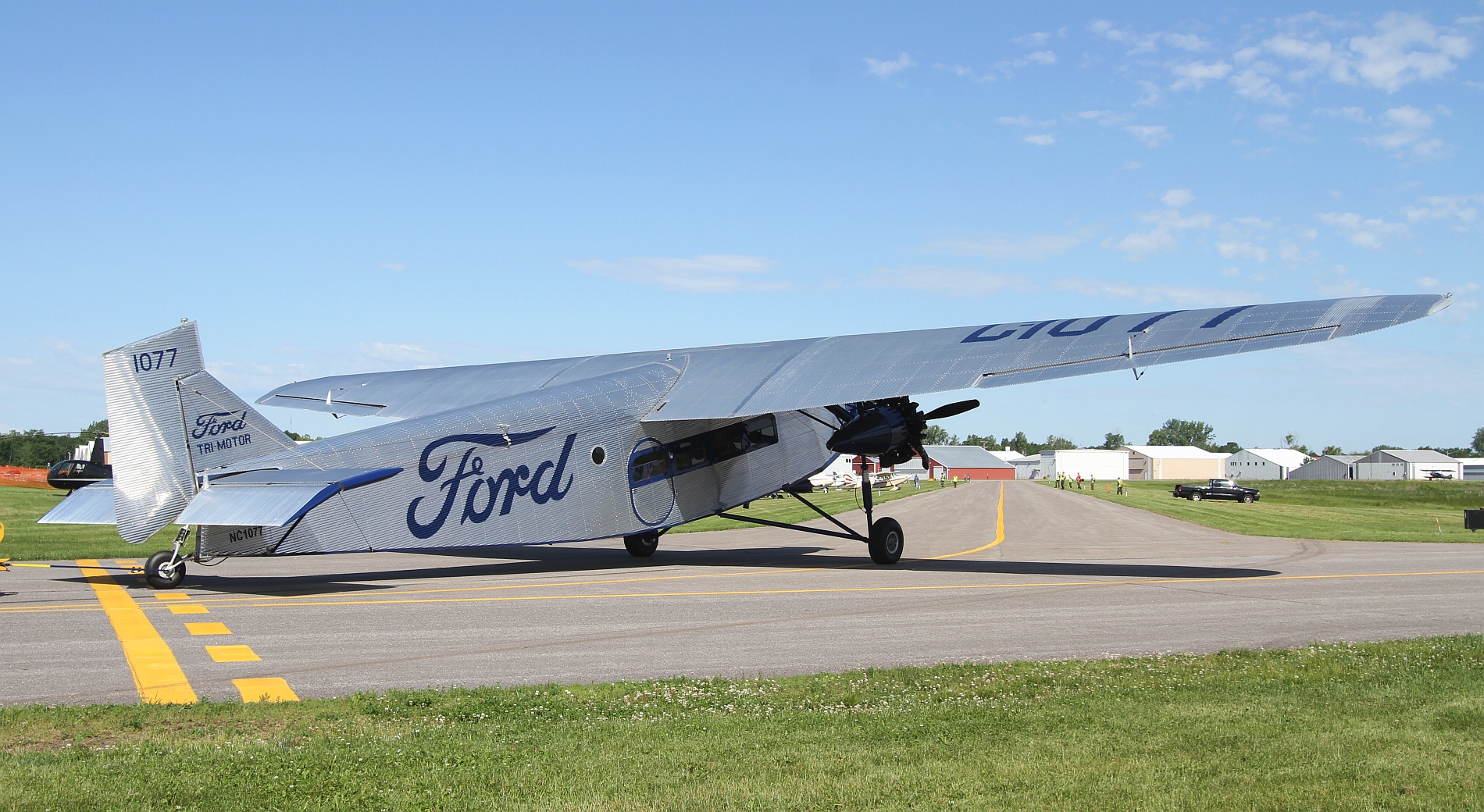 A Yak-18 was on the field.  It attracted quite a crowd and the owner was gracious enough to open it up for the next generation of aviators (and APD reporters) to sit in. 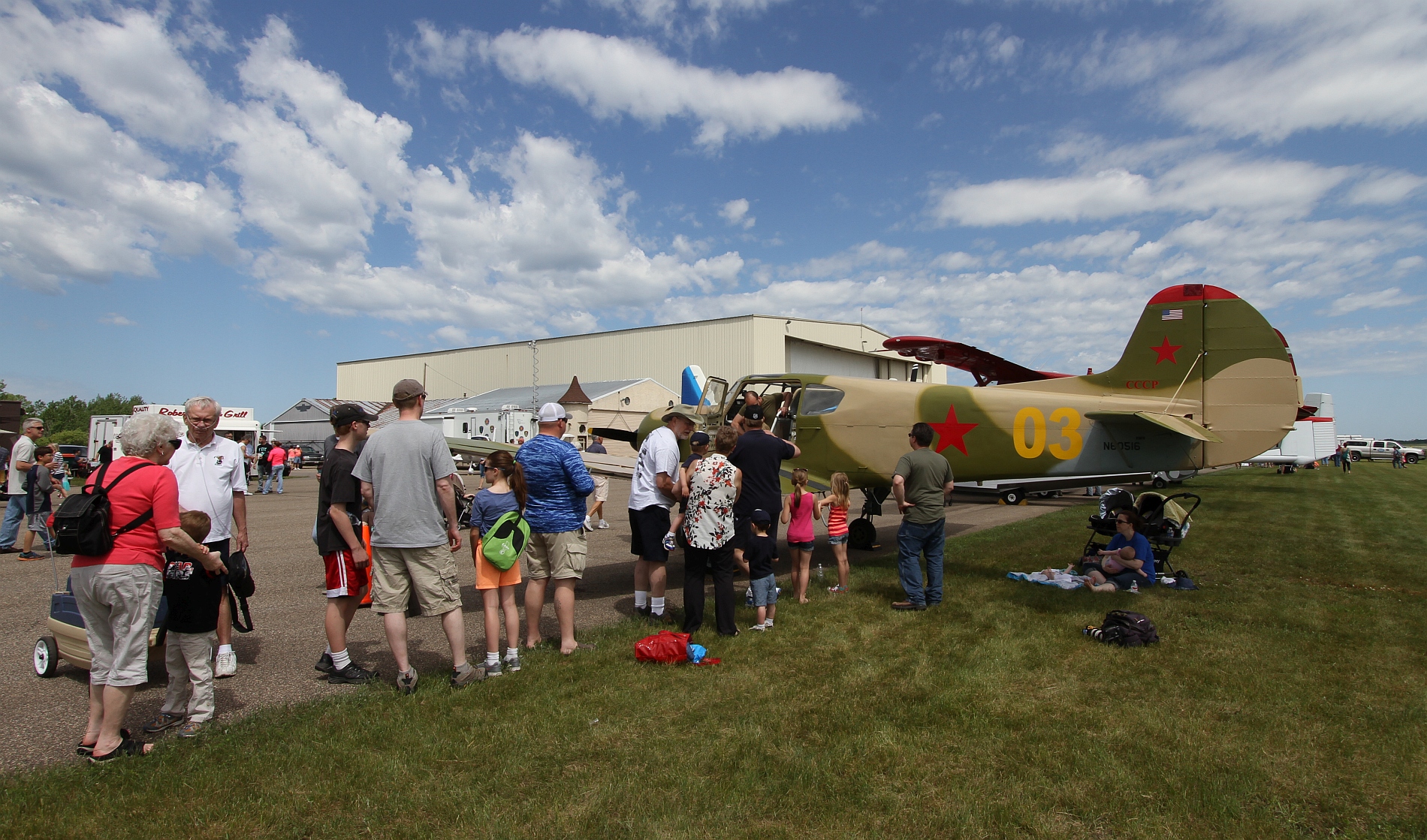 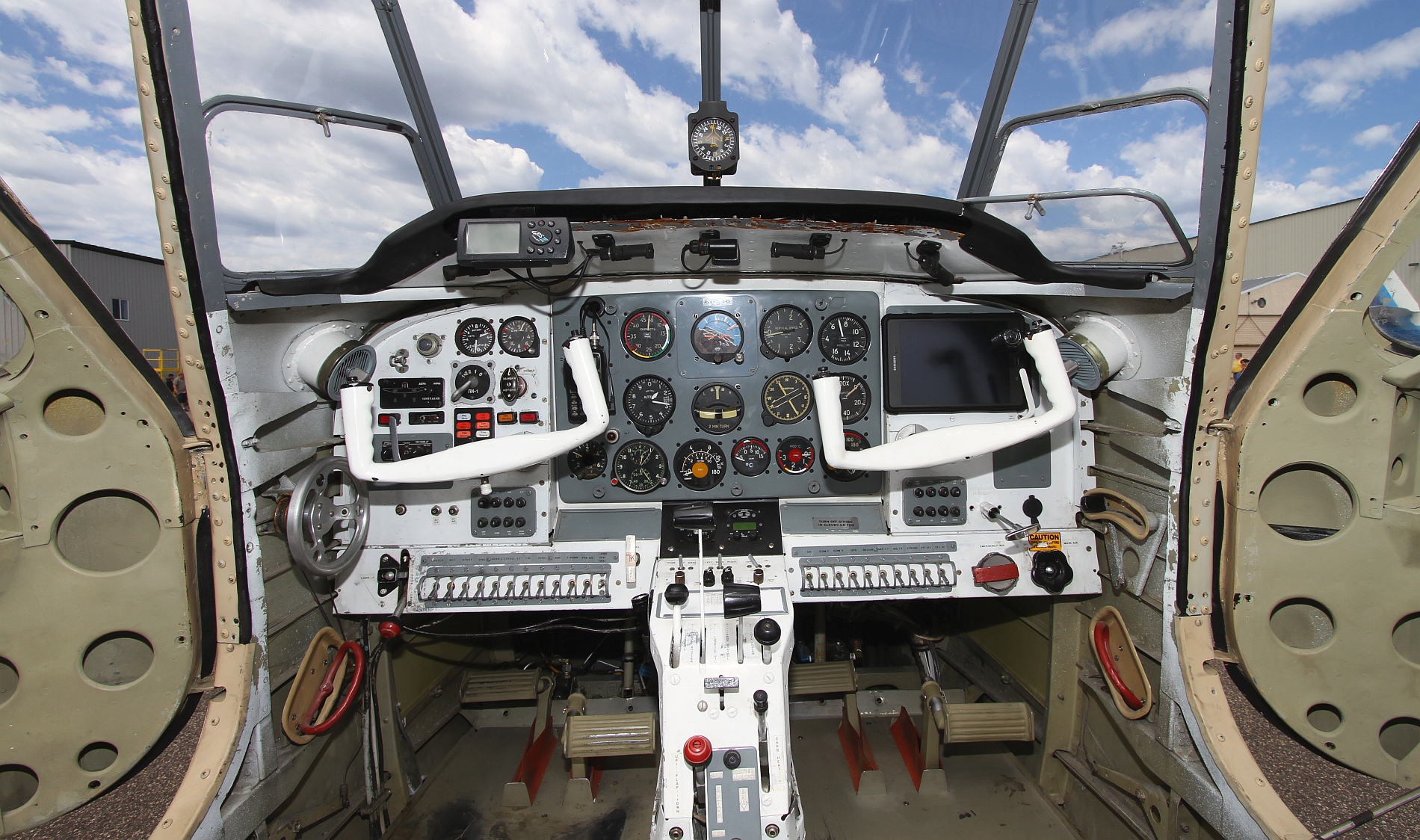 The Grumman Albatross HU-16B was on the show ramp.  I think the HU stands for huge!  With a 98’ wingspan this aircraft need some extra special marshalling to go get out of the ramp.  Airshow visitors were treated to a couple of low passes hearing the roar of the twin Cyclone 1820’s before she departed for a few hours on one of Minnesota 10,000 lakes. 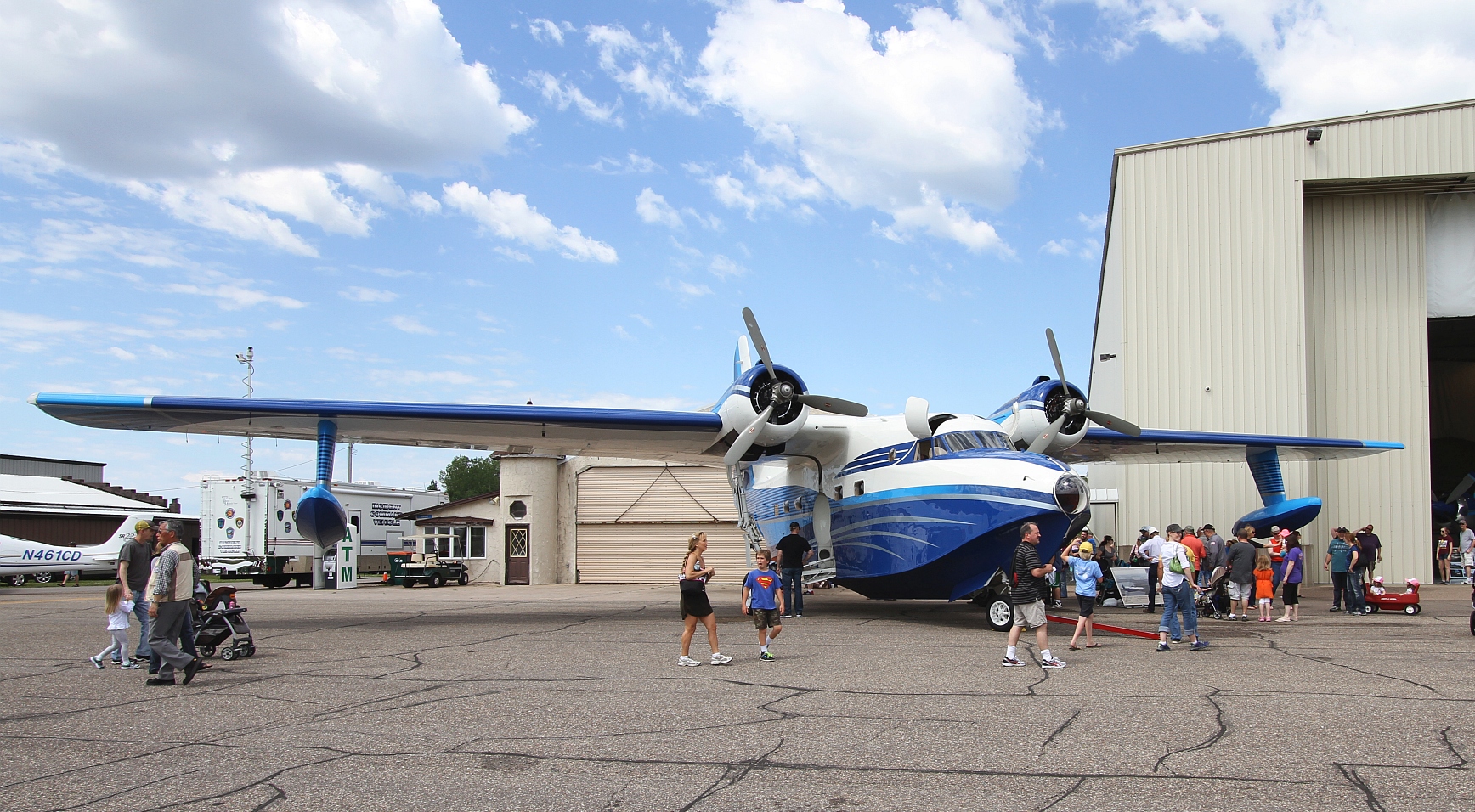 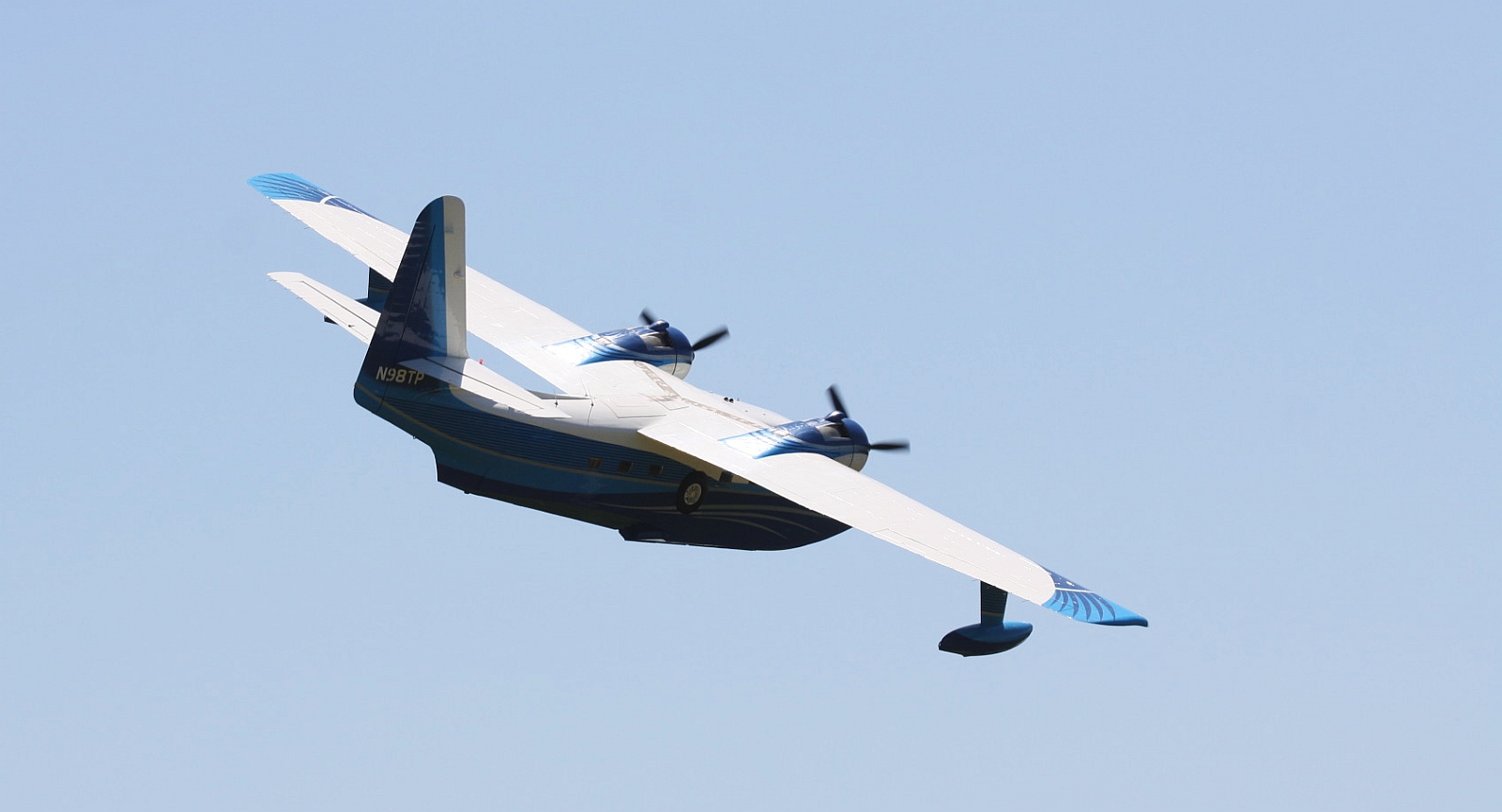 With summer here in Minnesota, Anoka KANE airport is a great place to spend a few hours.  There is a gazebo near the control tower with piped in ATC.  A grill and picnic table are available to sit and watch the operations.  Be sure to bring your camera, you never know what may show up;  traffic ranges from a Ford Tri-Motor, to corporate Gulfstream jets, to new pilots learning to fly on variety of Cessna’s,  Pipers and Cirrus aircraft.

Jeremy D. Dando reports on the aviation happenings in the Midwest of United States.  Watch for future articles on Midwest airshows including The Duluth MN Airshow and EAA AirVenture.

Jeremy D. Dando is an aviation photographer/writer based in Minneapolis, Minnesota. He holds a bachelors degree in Chemical Engineering and works as a Research and Development engineer designing new devices for the treatment of atrial fibrillation. Aviation photography allows him to combine his technical and creative sides to create an image which captures a moment in time and tells a story to the viewer. He has travelled worldwide photographing commercial and general aviation aircraft. Jeremy’s love of aviation and travel started early in life with family vacations to Europe and Florida. Now Jeremy spends his free time chasing things that fly and working with a local aviation restoration group to return a WWII aircraft back to flight worthy status. Jeremy’s photographic work has been used in corporate publications, magazines, calendars, websites and news articles. Jeremy uses Canon photographic equipment.

Jeremy can be reached at: [email protected]
Send this to a friend
SUBSCRIBE TO OUR NEWSLETTER
All rights reserved © Aviation Photography Digest, 2018
Subscribe to our FREE newsletter and get notified when new articles are published.
Subscribe
×
In order to provide you with the best possible experience on our website, we use cookies. If you continue to browse we will assume your permission to use cookies.I UnderstandRead more