Aerial combat today is based on the idea of a multi-national force working together to complete tasks given by their respective governments, in short to achieve a victory by working together.

Never before has that emphasise on a coalition force been more prevalent than today, a simple example of this coalition of airforces working together is Australia’s contribution to the fight on ISIS from late 2015 a contribution that was apart of a much larger multi-national force deployed to the Middle East.

Today’s warfighter or more to the point the combat instructors, not only has to be immersed in the tactics that will be utilised by his or her nations defence forces but to utilise those skills by working with that nations partners and utilising their skills to formulate a plan to incorporate the strengths that everyone brings to the table.

Royal Australian Airforce’s Exercise Diamond Storm 2019 apart of the RAAF Air Warfare Centre’s Air Warfare Instructors course has evolved from the 2017 edition to include an increase in knowledge of evolving tactics. It also is allowing the potential Instructor graduates to gain a better understanding how to gain experience in utilising the interoperability gained when working with key allied forces.

This year the United States Airforce provided an increased role in participation for the six month AWI course. Firstly with exercise Diamond Shield held at RAAF Base Williamtown in March the 18th Aggressor squadron and the 23rd Bomb Squadron participated in the exercise providing a serious Red Air adversary threat for the potential graduates to plan and fight against.

For Exercise Diamond Storm 2019 held at RAAF Base Darwin and Tindal in the Northern Territory, the U.S. participation was another big factor along with the 23rd Bomb Squadron returning for a second time to Darwin. And the USAF California Air National Guard 144th Fighter Wing based in Fresno California sent 8 F-15C Eagles from the 194th Fighter Squadron to Darwin to participate in the exercise.

The design of the course for those who one day will be instructors in combat and weapons tactics for their respective RAAF squadrons is to push them to the limits and to give them more insight in how to use that knowledge gained by working with allied forces in particular and evolve and develop those tactics for the future. 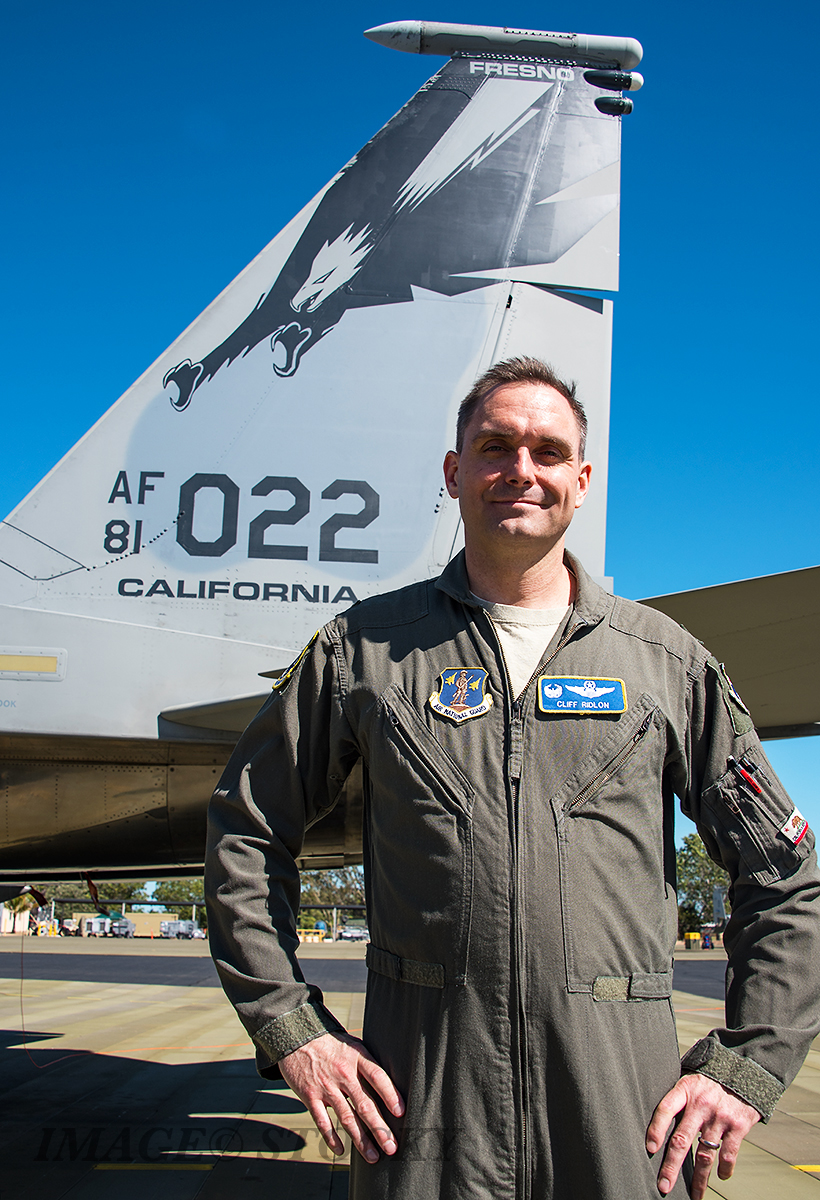 Commanding Officer of the 194th FS Lt.Col Christopher “Cliff” Ridlon spoke to APD about the their deployment to the Western Pacific and participating in one of the Enhanced Air Cooperation components routinely shared between the USAF and RAAF, this time in the form of exercise Diamond Storm.

“We’ve had one of the longest defence relationships with Australia we’ve been working together since world war one and we have been fighting alongside our Australian allies and so that is what we are to build up on top of that relationship training with the Royal Australian Airforce.”

The 194th FS is a unique USAF unit in the fact that it is a Air National Guard unit with its members in a sense reservists with a full time job elsewhere. This allows personnel that have flown for a longer period of time than most to still have a valued contribution to the U.S. Airforce, this means they have more experience and are more likely to be ranked to a RAAF Wing Commander level as was the case in Diamond Storm.

This means they have a ton of experience and are able to use a wealth of knowledge they have gained over the years they have been flying fighter aircraft to train the Air Warfare Instructor students, in particular those hopeful graduates participating in the exercise from the RAAF Air Combat Group squadrons.

Lt.Col Ridlon explains what these experienced pilots bring to an exercise like Diamond Storm and how those with less flying hours can learn from their experience.

“So that is really our focus here at Diamond Storm, what we bring is the air to air expertise and the other part is that the F-15 is really known for debriefing really well, so we bring experience in the form of our senior guys in our team and the Instructors are gaining knowledge on how to fight in the air. But we are also learning from them and this is what our participation is all about, we’ve worked together before at Red Flag in Nellis and also in Alaska so we know how the RAAF work but we are gaining more synergy the more we work together which is great.”

The 194th mission on Diamond Storm has been to mix up their scenarios playing a DCA role in one mission and in the next maybe an OCA role.

The Lt.Col explains what roles they been playing during the exercise and give a little bit of detail as to what scenarios they have been participating in.

“So we’ve done a mix of Both Red Air and Blue Air either working with the students or against them through the various scenarios. We provide the air to air component in this exercise so we are providing DCA or OCA role, we protect friendly aircraft in the skies from opposing forces and basically we are protecting our territory.”

Apart of this exercise it was noted that there was a mix of F-15C’s from the 144th Fighter Wing and aircraft from the “Bayou Militia” the Louisiana Air National Guard apart of the 159th Fighter Wing. 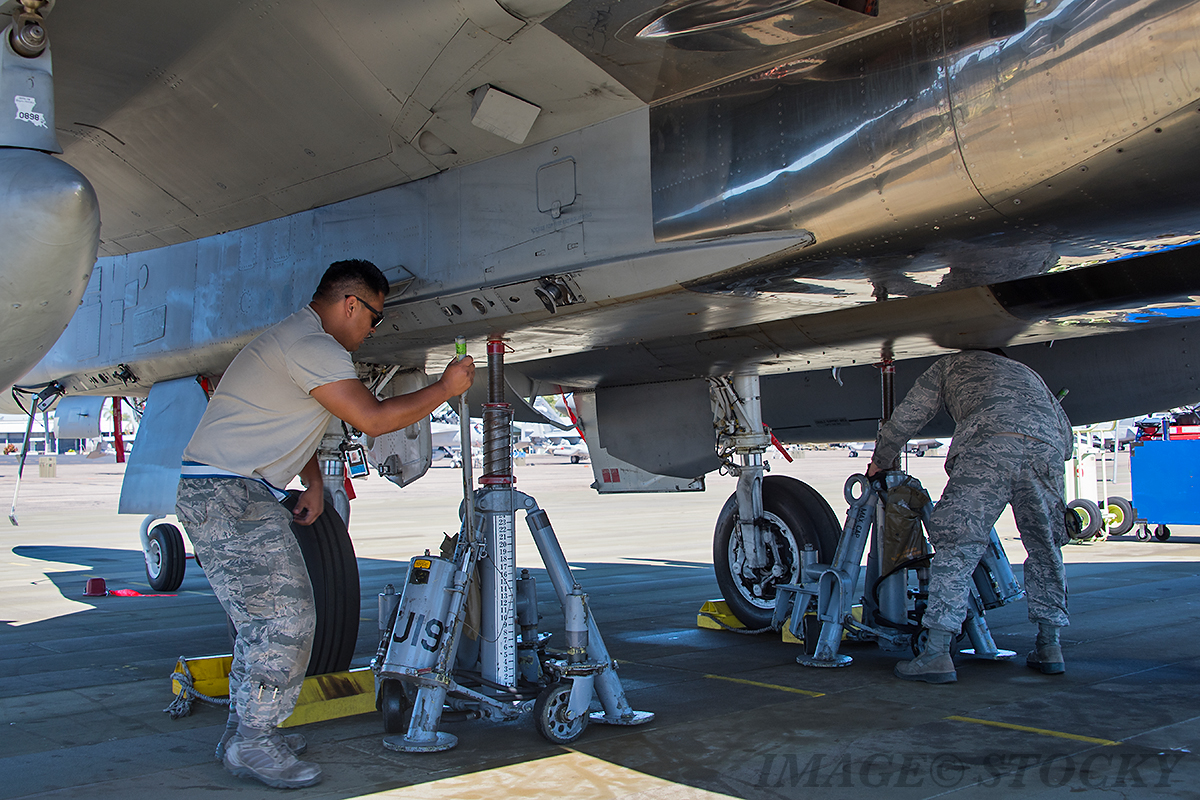 Asked about the Cajun fighters Lt.Col Ridlon explains, “Essentially the Air National Guard is a group of part time forces that work together while allowing us to gain currency and allowing others back home to continue their roles. We brought out 160 people out here to Australia with about 15 pilots making up that number with around 140 maintenance personnel and some security and communication specialists making that total number.”

He continues, “And both the 144th and 159th Fighter Wings are working together in the Indo- Pacific command region providing the Theatre Security Package and to show our presence in the region reassuring our allies for instance in this case training with our Aussie counterparts.”

The F-15C Eagle is a true workhorse of the USAF air combat fleet, they have been around for a very long time. A few aircraft apart of the 194th’s visit to Darwin were noted to be Gulf War veterans.

Two F-15’s in particular were noted with aircraft kills from the 1990/91 conflict, the two aircraft came from both the 159th 144th Fighter Wings in particular aircraft 85-1012 which had three green stars underneath the cockpit. Deployed to the Middle East as part of Desert Storm the Eagle was then apart of the 58th Tactical Fighter Squadron, the aircraft scored three air to air kills against Iraqi air force aircraft (1x MiG-23 2x Su-22). Capt Dave “Logger” Rose (callsign Chevron 17) downed the MiG-23 Flogger and Capt Tony “ET” Murphy (callsign Chevron 22) downed the two Su-22 Fitters, both MiG and Suhkoi’s fell to AIM-7 missiles.

The other aircraft noted was F-15C 84-0014 with a single Su-22 kill green star underneath the cockpit.

Lt.Col Ridlon explained the features of the F-15C to APD and why even after over 30 years of service the charlie variant still has some teeth in her.

“It’s a pure air to air fighter we have two Pratt and Whitney F100 engines with an awesome power to weight ratio; a pretty low wing loading for a fighter and its basically just fulfils the air to air mission, from protecting aircraft from enemy forces or protect friendly areas or either U.S. or allied airspace from enemy airforces.

The aircraft carries two external fuel tanks each one carrying 600 gallon fuel in each tank and we can jettison those tanks in air to air combat; moving onto our normal combat load out is six AIM-120 radar guided beyond visual range missiles and then two AIM-9X heat seeking missiles. And lastly we have an M61 20 millimetre canon which can carry 960 rounds.”

Lt.Col Ridlon finishes by saying that the F-15 is awesome to fly and still capable aircraft after all this time in service with the USAF.

The Air Warfare Instructors course is designed to test the those students hoping to become the RAAF’s next generation of combat instructors over a six month period and taking them to the limit.

In one of our future articles we’ll look at how the students are pushed to the limit when we interview exercise commander RAAF Group Captain Matthew McCormack.

The 144th Fighter Wings involvement in Diamond Storm has given these students a new way to approach and evolve their own knowledge in how to prepare a foolproof combat and tactical plan of attack on any mission they undertake in the future and how to win. 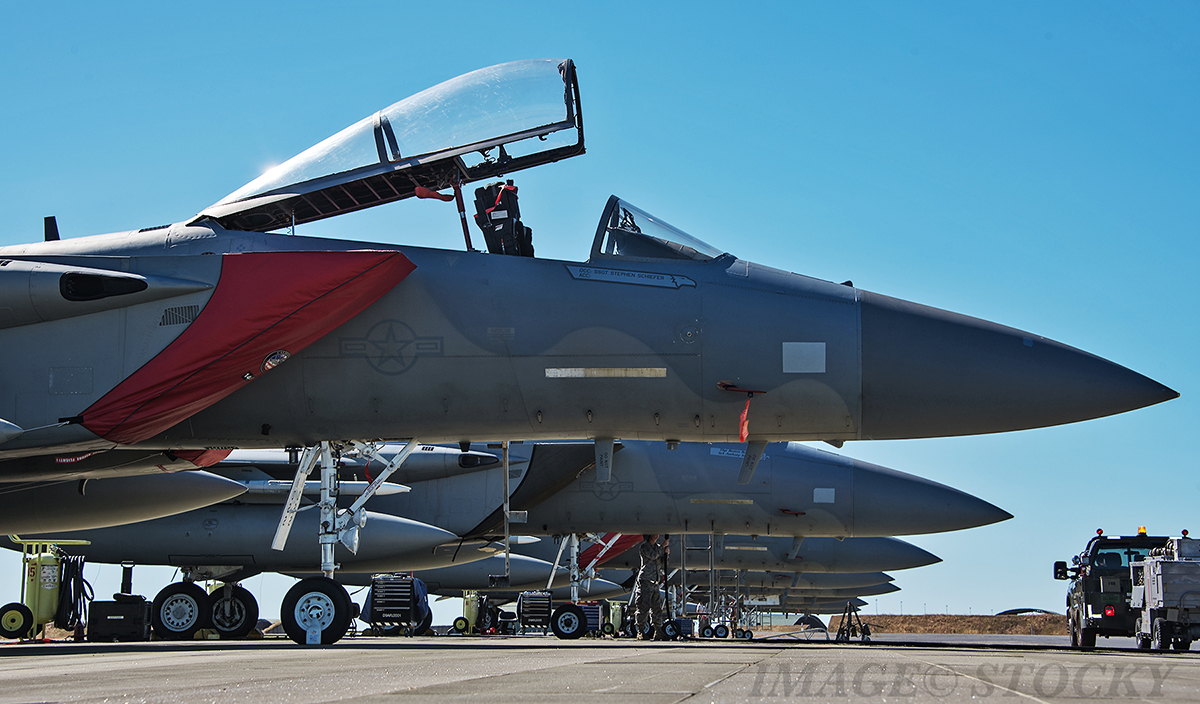 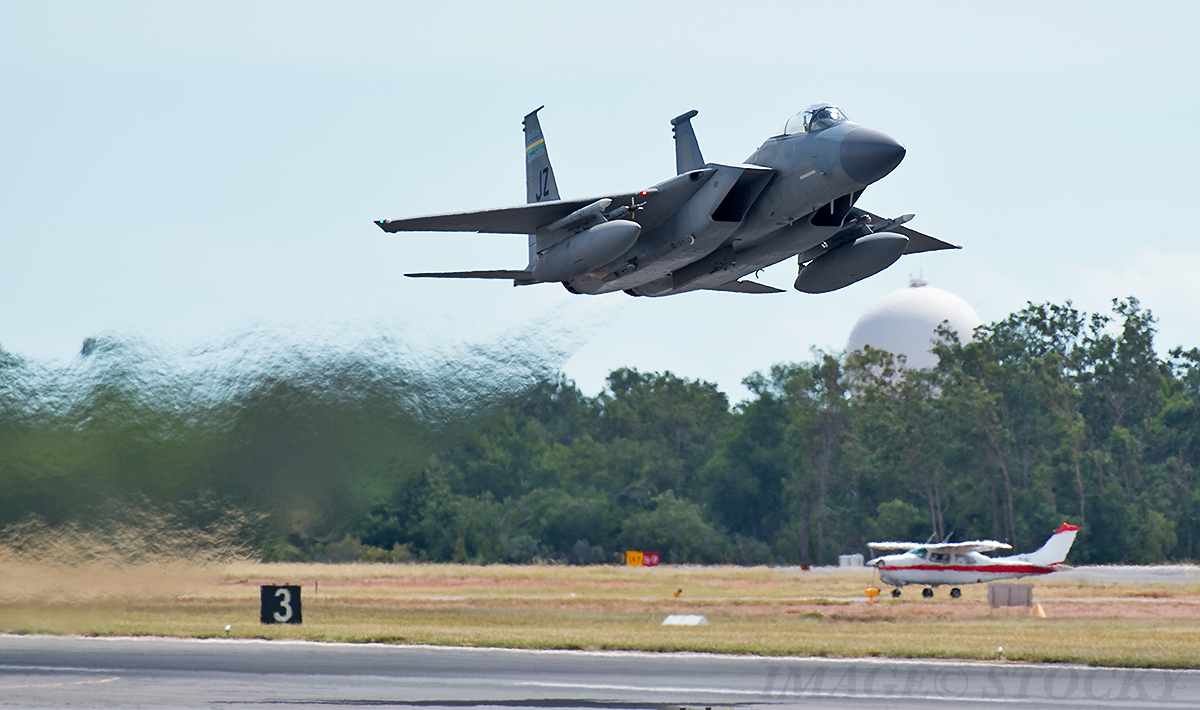 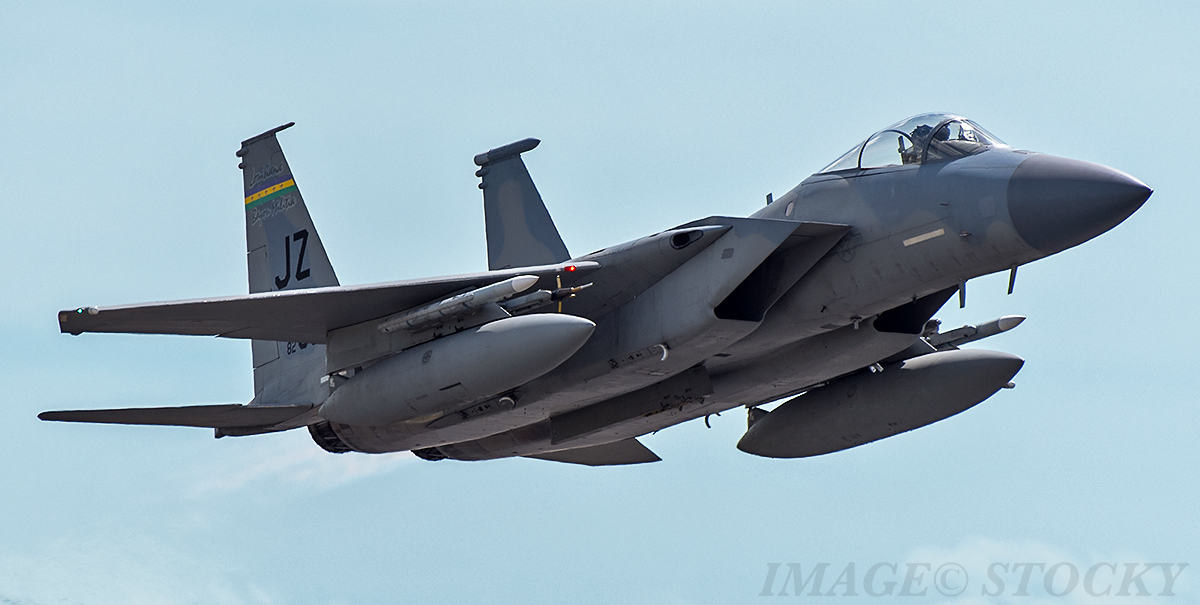 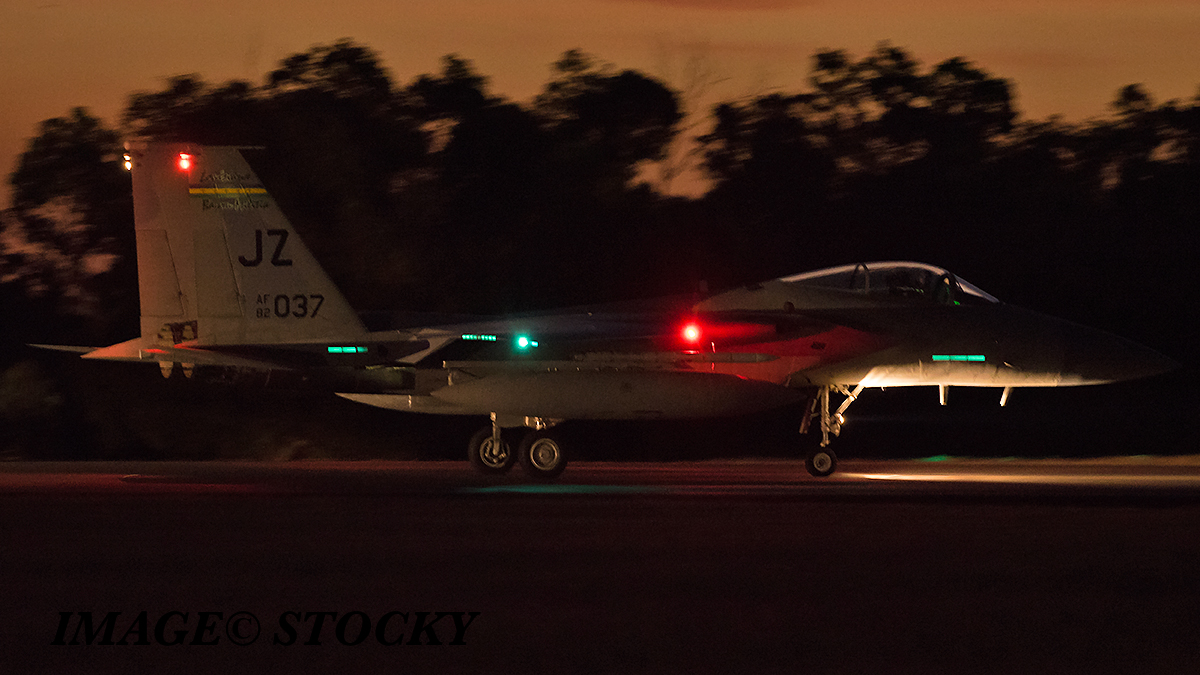 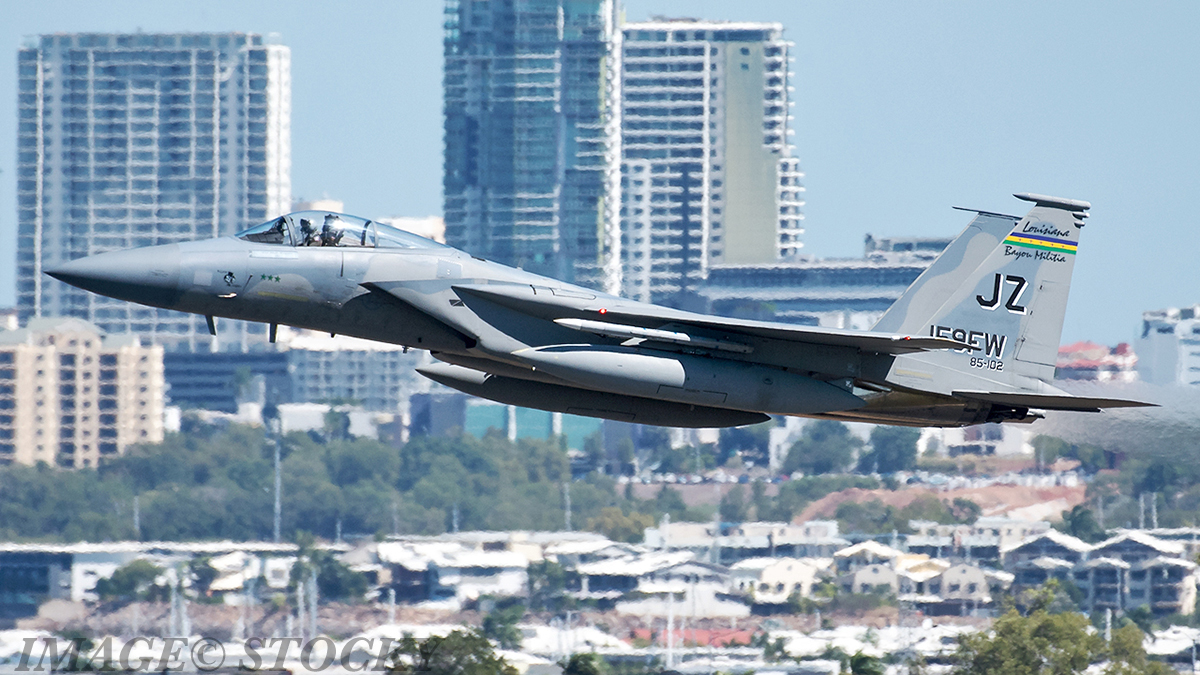 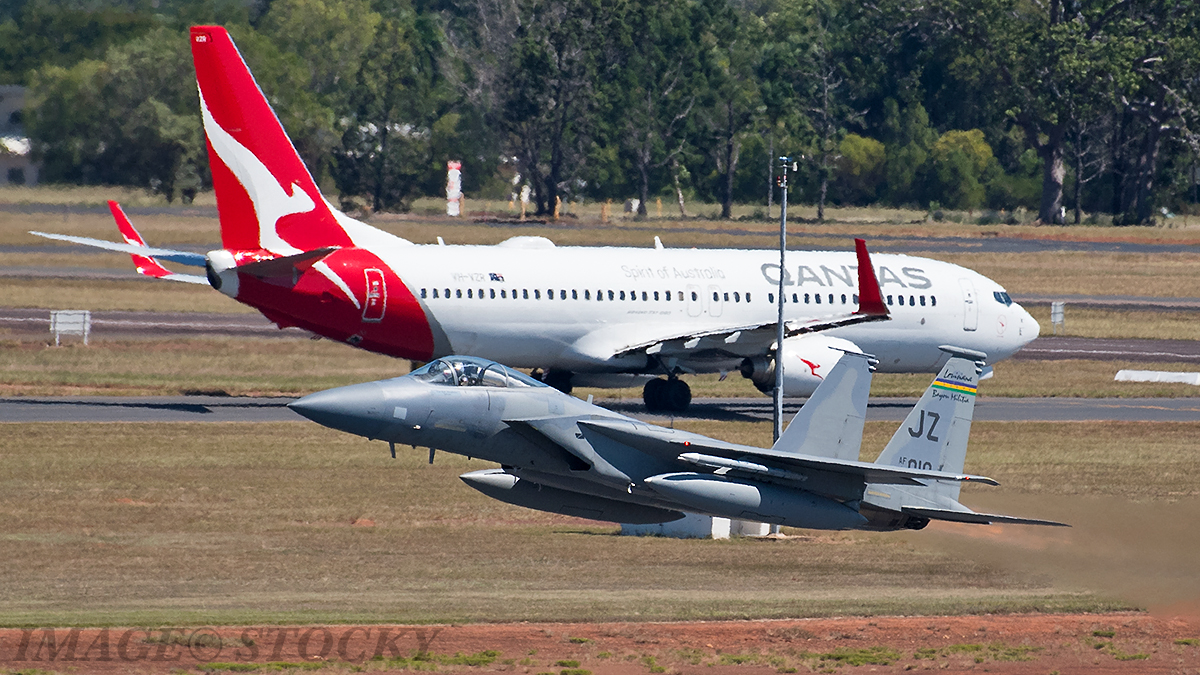 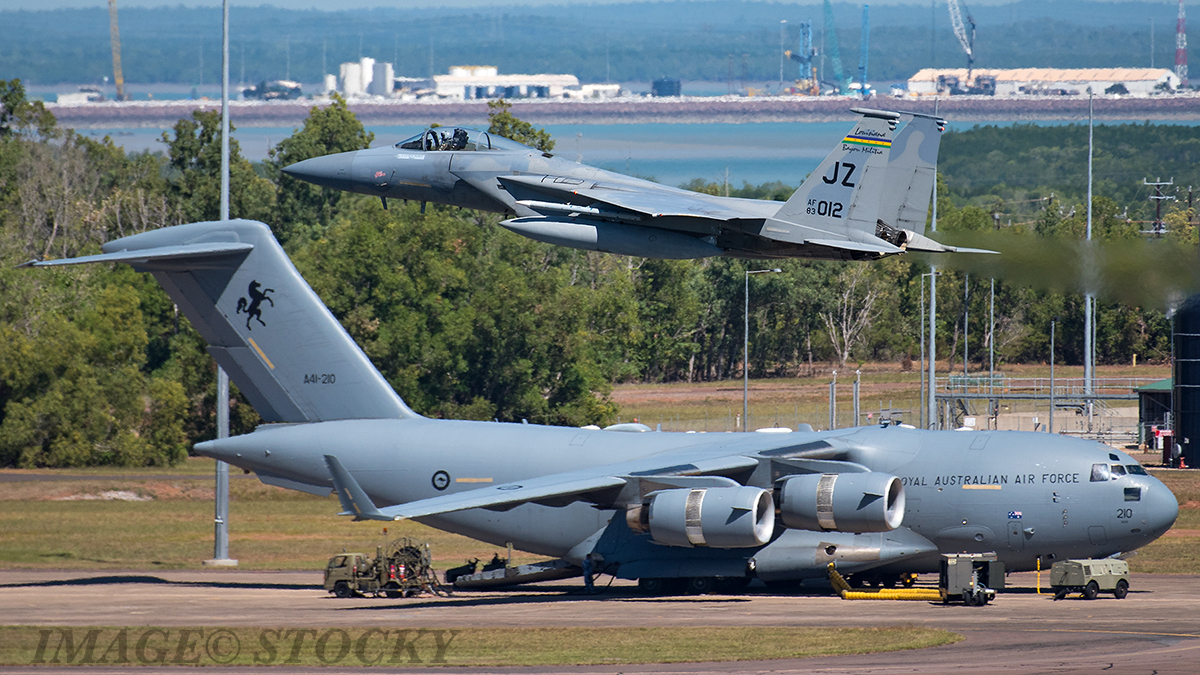 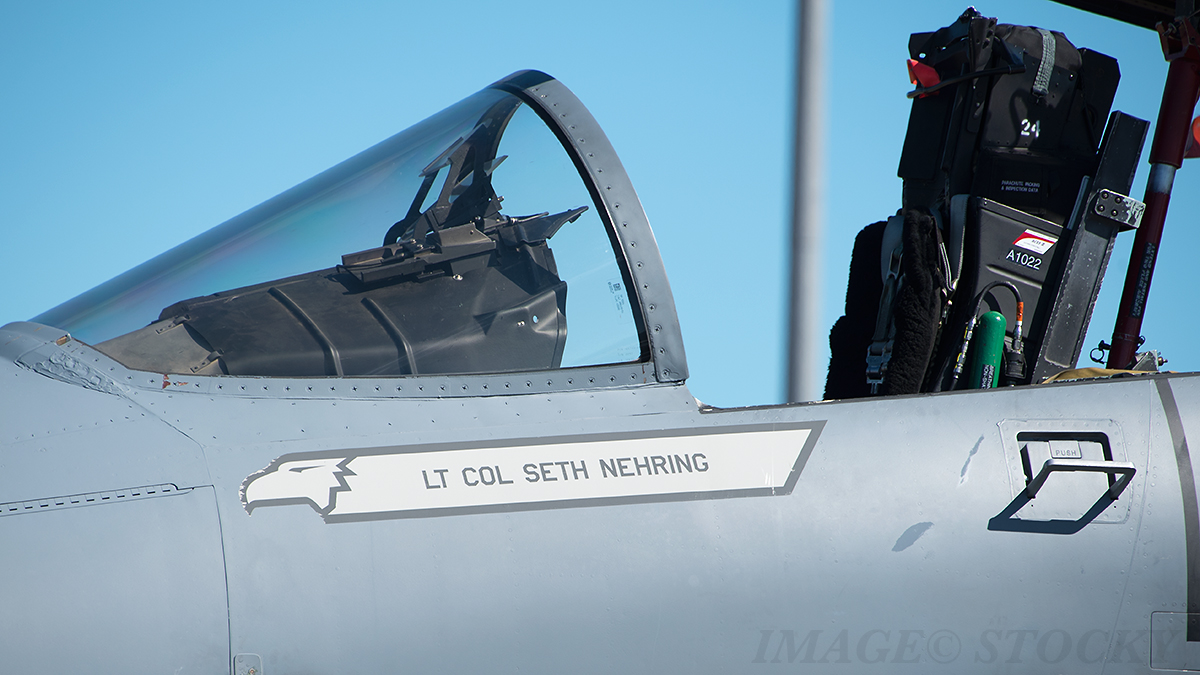 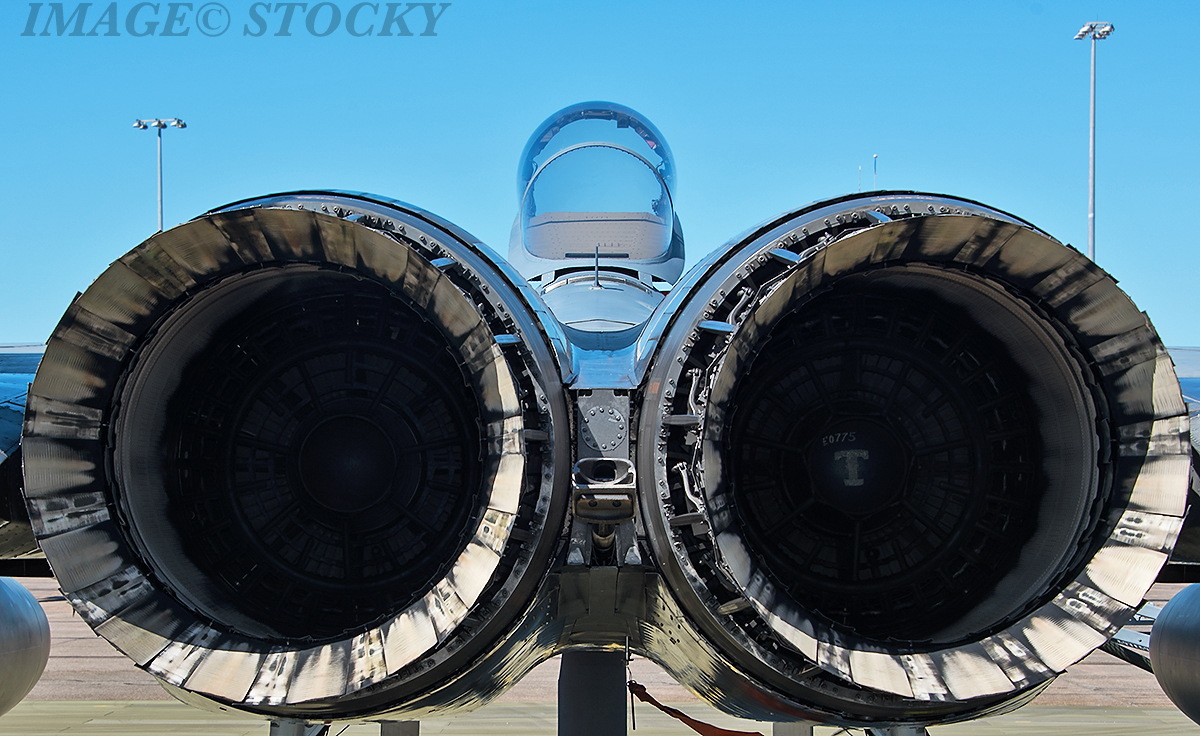 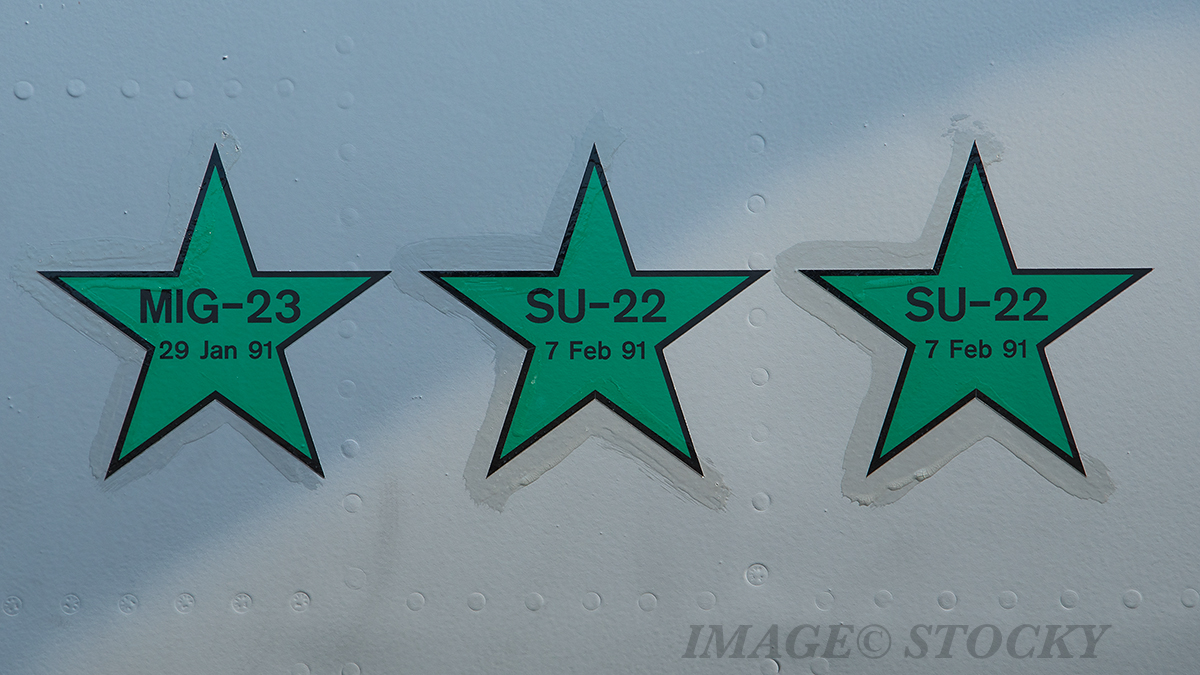 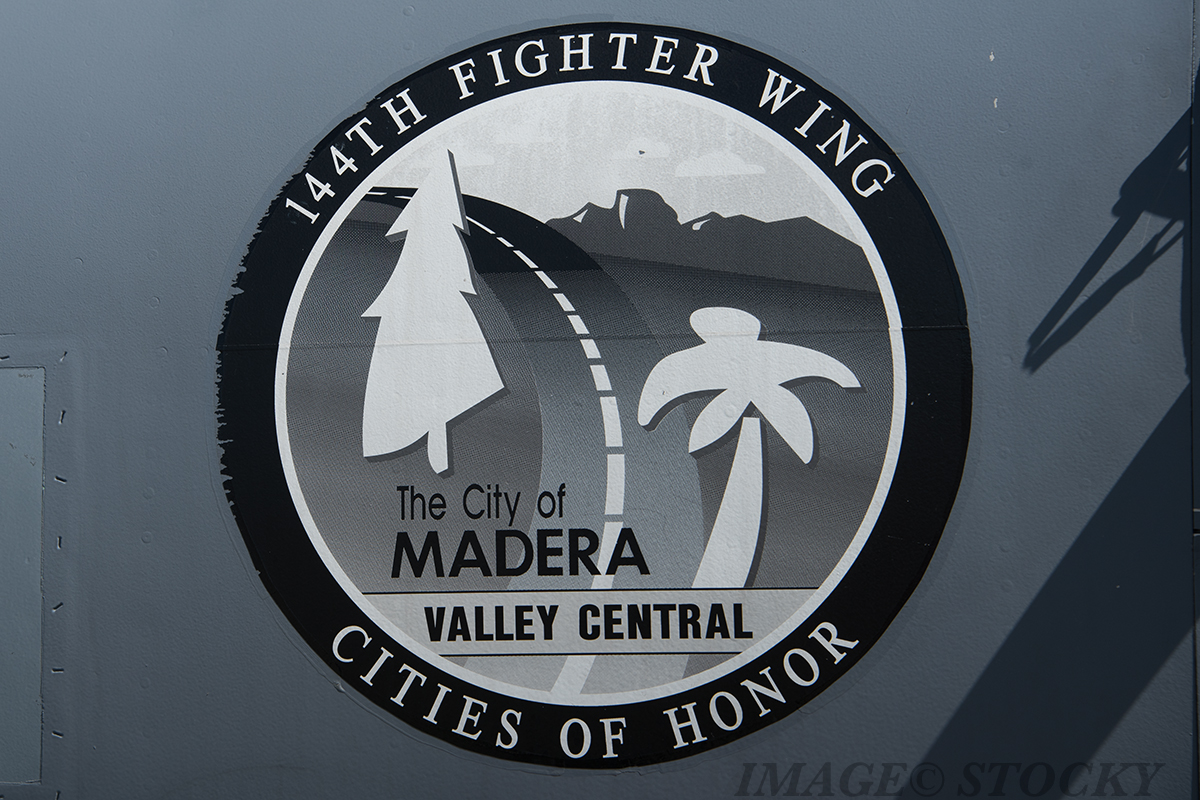 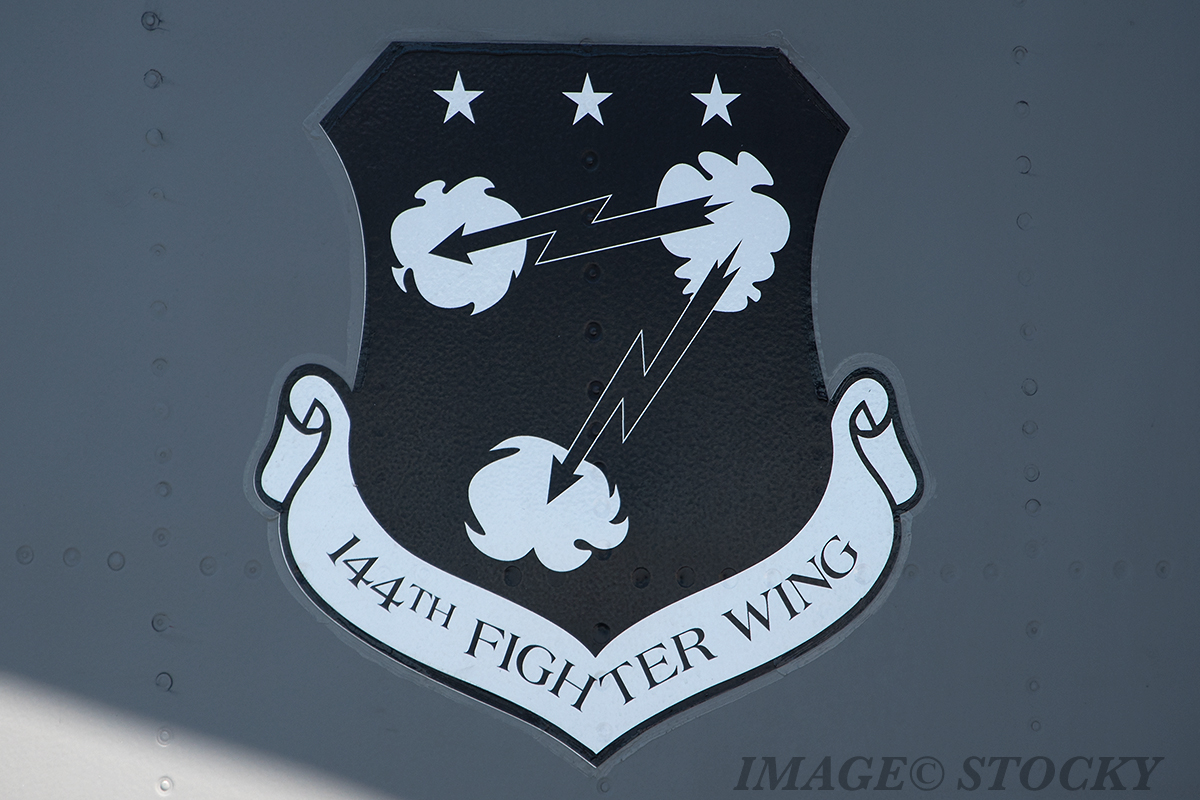 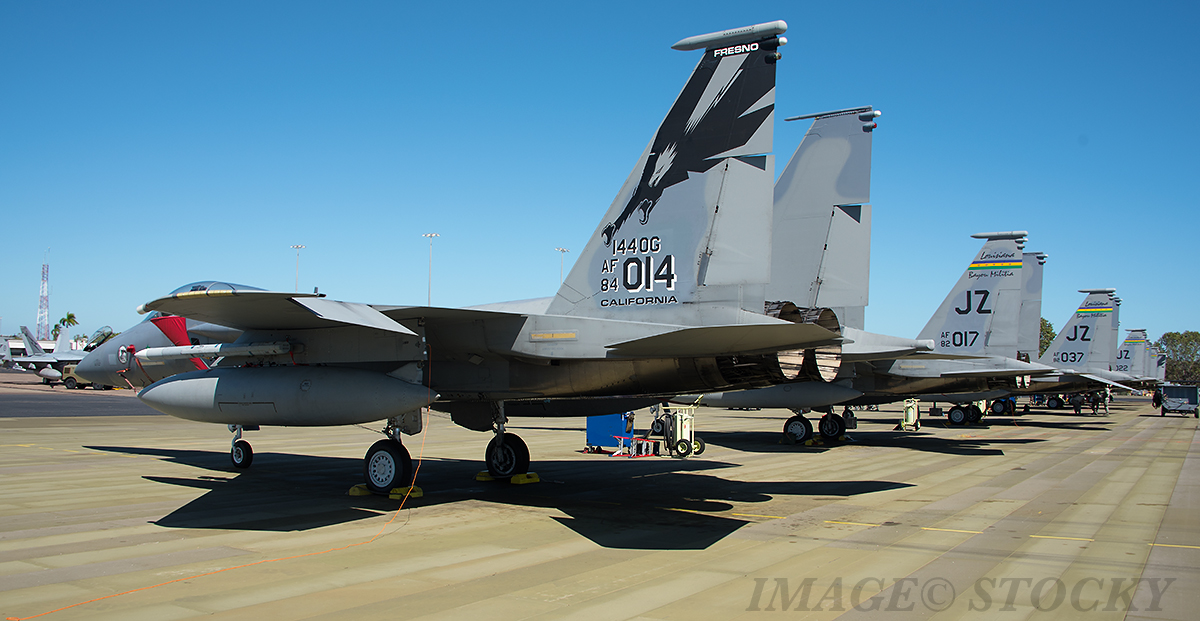 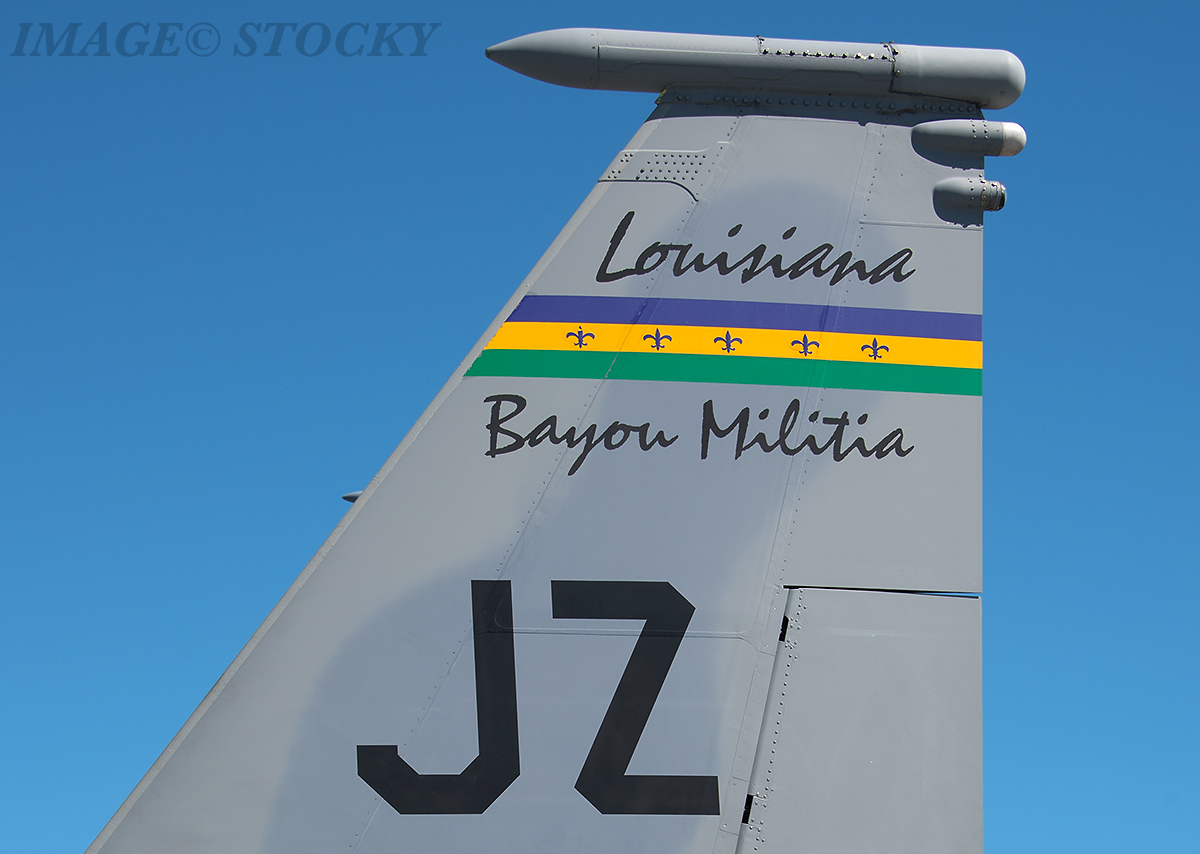 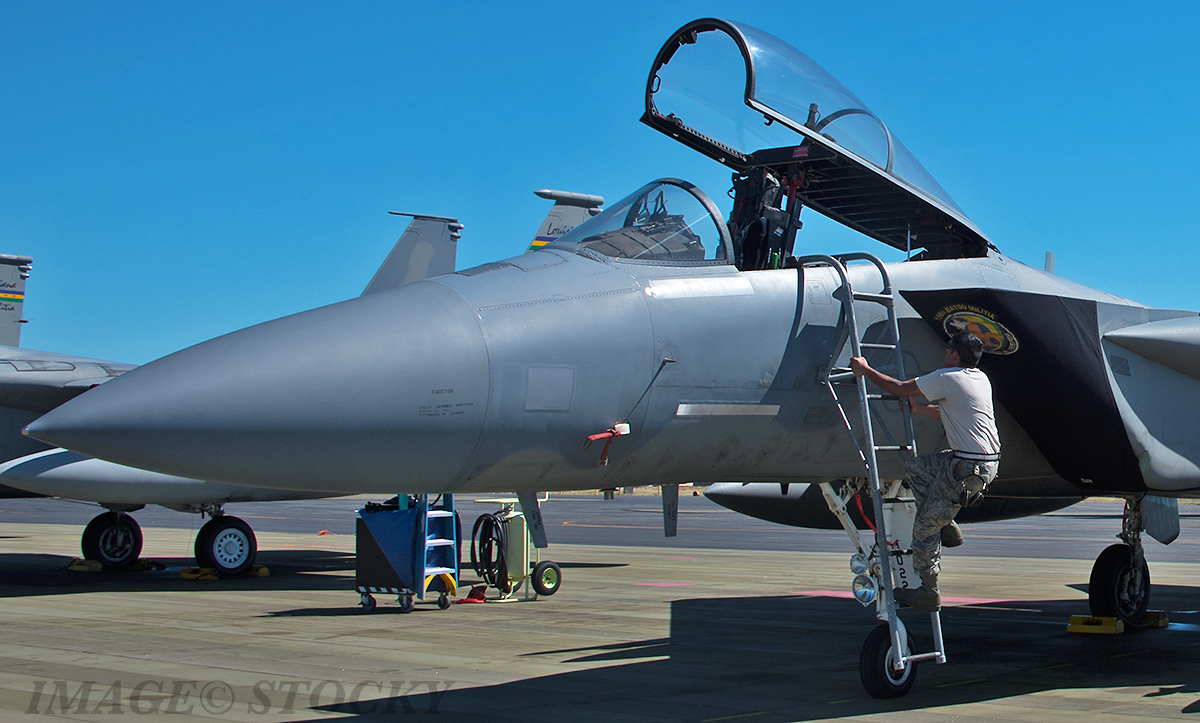 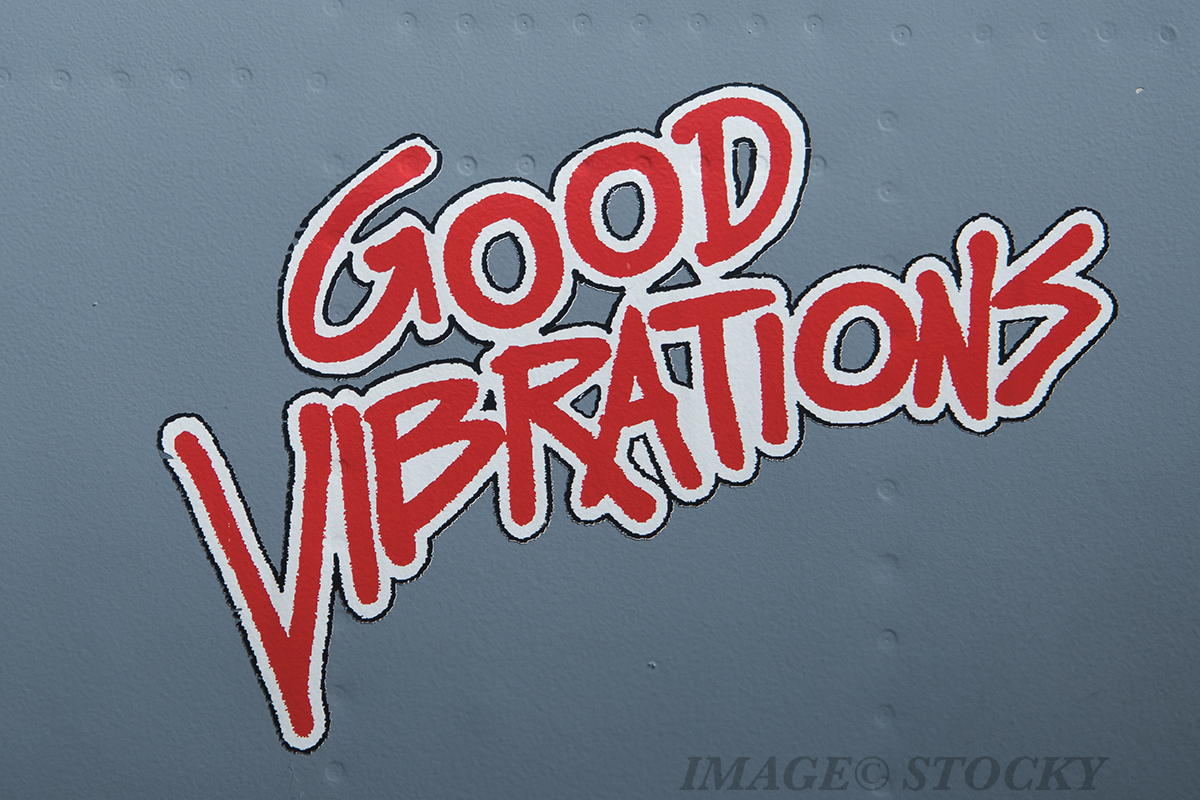